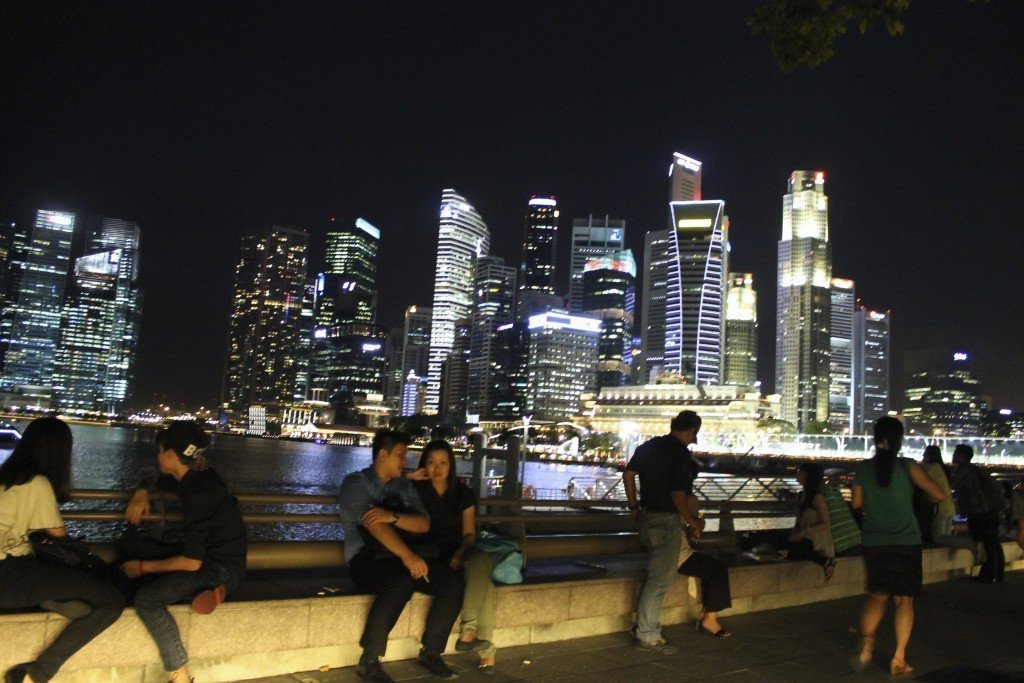 When I found out that it would be cheaper to fly through Singapore to get to Vietnam from Indonesia, I jumped at the chance to see another country and add another stamp to my passport. With 18 hours to explore one of the most modern, unique, and aesthetically pleasing countries in the world, I had a lot to do in a short span of time.

One aspect that struck me as soon as I arrived, even just at the airport, was how immaculately clean and well thought out everything is. When I was taking the Mass Rapid Transit (MRT) from the airport to the city, the first sign I saw was a S$500 fine for eating or drinking in the station. One Singapore Dollar is almost equivalent to the US Dollar. Yeah, I was definitely in Singapore now.

Some other interesting laws that I came across in Singapore:

Selling chewing gum at a local store is against the law

Spitting is banned, significant fines are involved if you spit on the street

There’s a mandatory caning if you graffiti public property

Those are just a few, but let’s just say that I was worried to even jaywalk, not sure what legal repercussions I could be walking into. With that said, the laws, although seemingly ridiculous at times, have done wonders for the cleanest, most respectable, and architecturally intriguing city that I have been to. 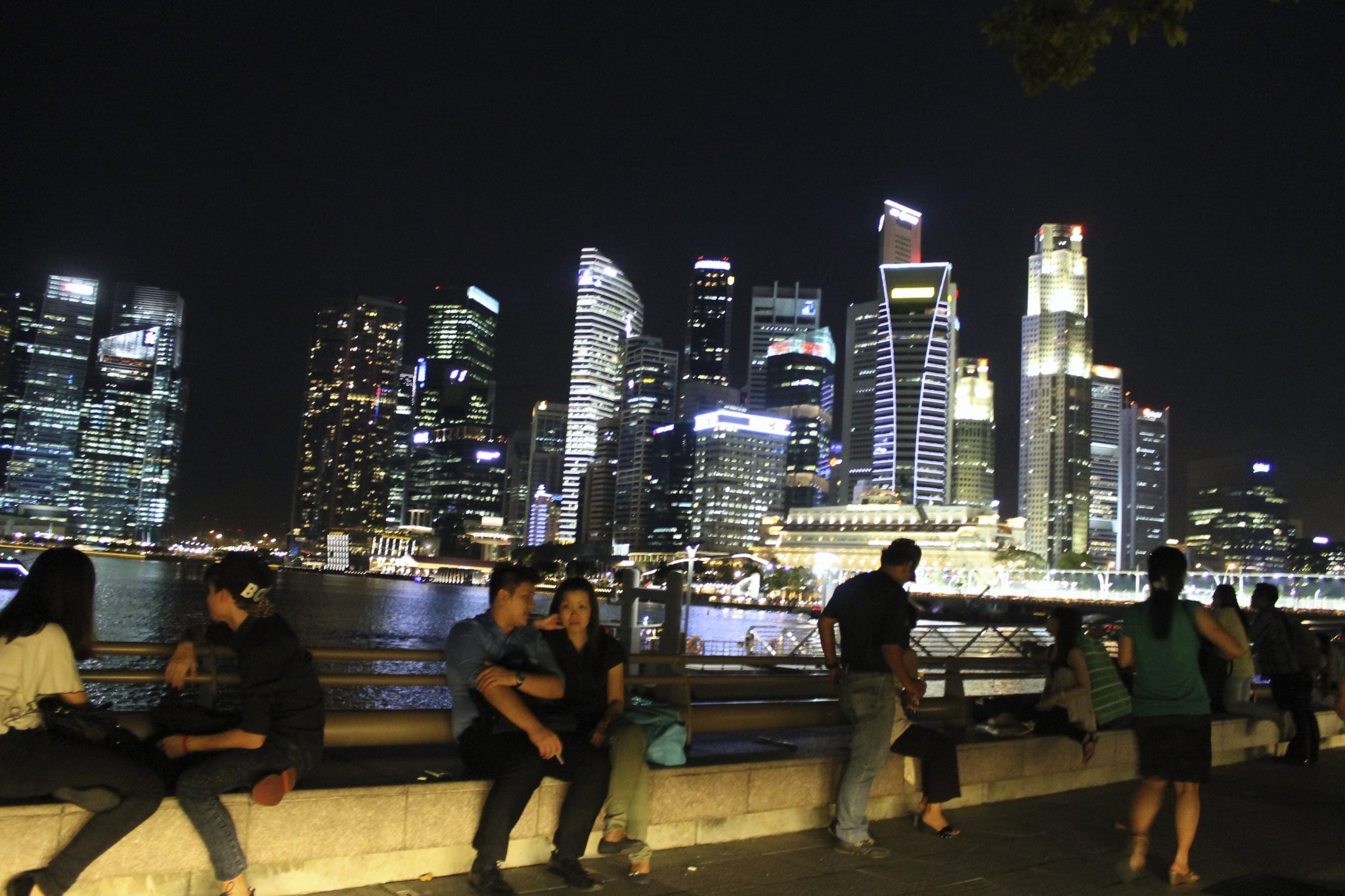 When I arrived in the city, I walked from the MRT station to find my hostel, the most expensive one I’ve paid for in Southeast Asia at $20 a night, it was the cheapest one I could find in Singapore. Oh, did I mention that Singapore is almost as expensive as Australia? The hostel was the only disappointing part of Singapore, as even though it was the most expensive, it was also probably the smelliest and dirtiest one I’ve stayed at in Asia. Other than the hostel, I loved Singapore with a passion. I have a thing for organization and well planned out cities, it makes me happy. 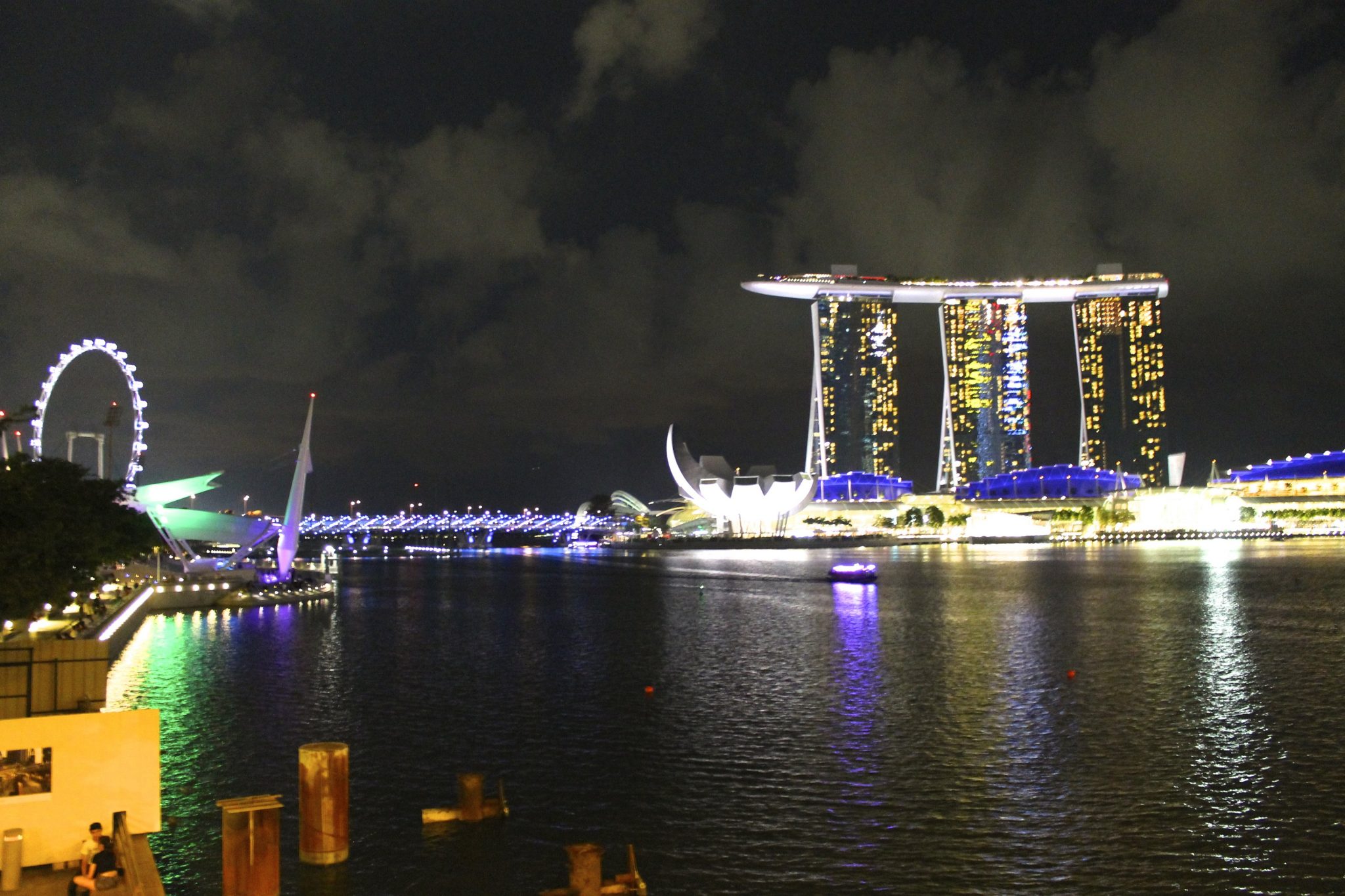 After checking in, I hit the streets to see what my one and only night in Singapore had to offer. Since I was so short on time, I did some research ahead of time for a perfect night out in Singapore. I started by going to Makansutra Gluttons Bay Food Court. It was one of my favorite food experiences in Asia, offering a variety of Asian specialties on the beautiful esplanade, it’s an upscale outdoor food court that has budget friendly dinner options. I grabbed some pad thai and went to sit on the esplanade overlooking the bay, Singapore is one of the most gorgeous cities at night. 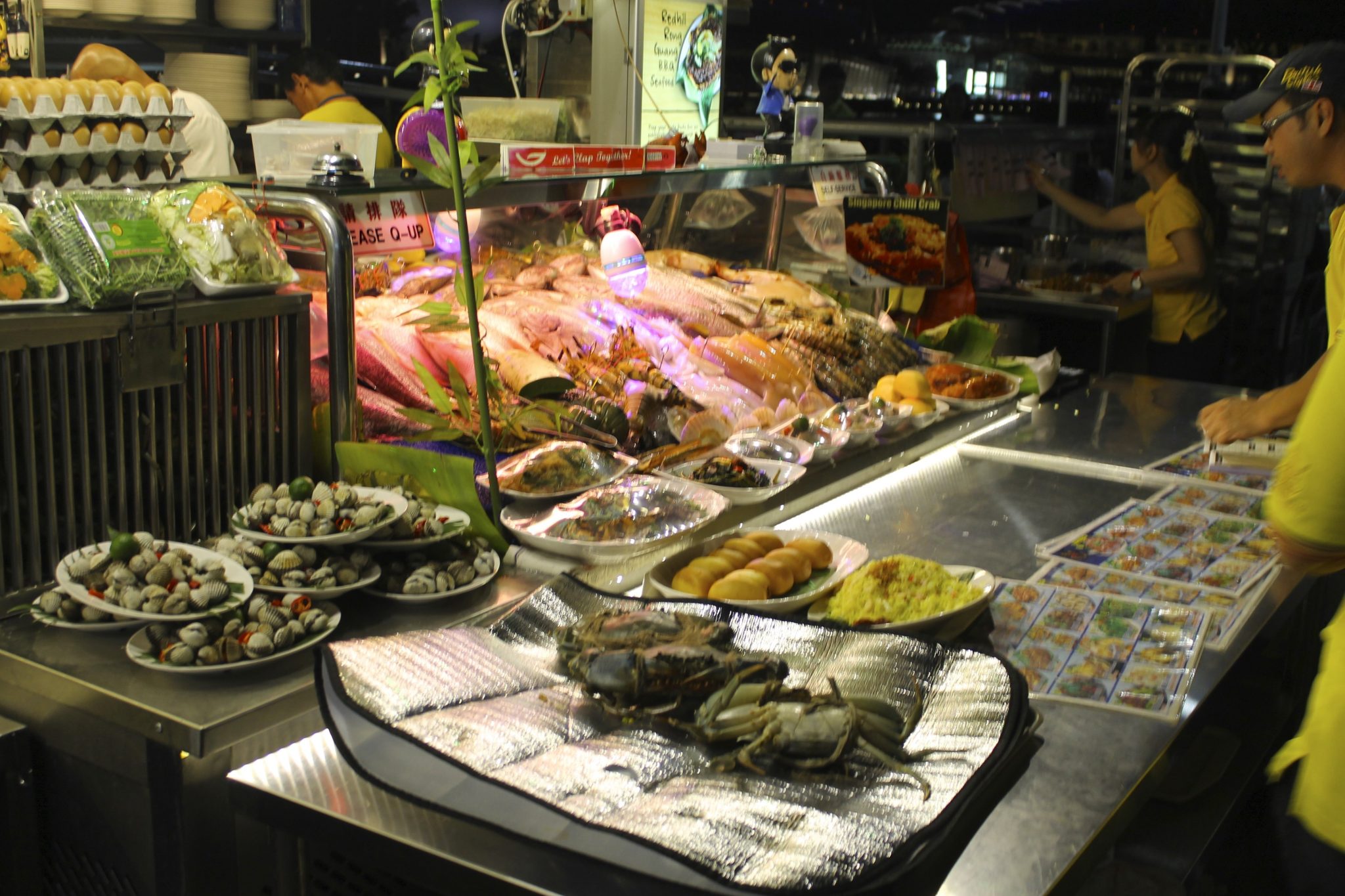 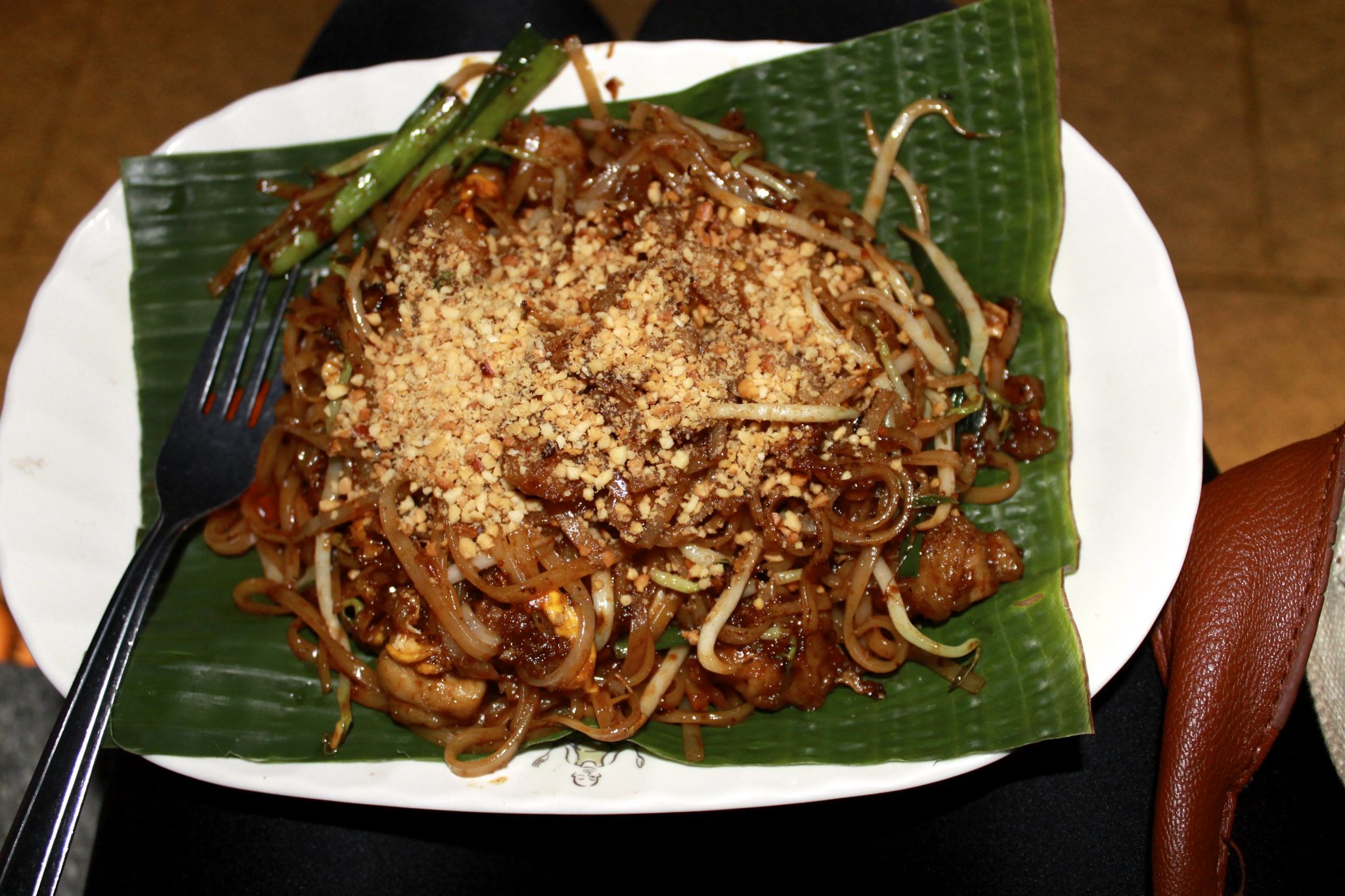 After dinner, I walked along the esplanade, there was some live music playing in front of the water, there was a fireworks show over the bay, and tons of people laughing, having a good time, couples getting cozy under the beautiful view, families eating cheap eats together. I walked for awhile just taking in the sights of the city, my end goal was a little place called Gardens by the Bay. 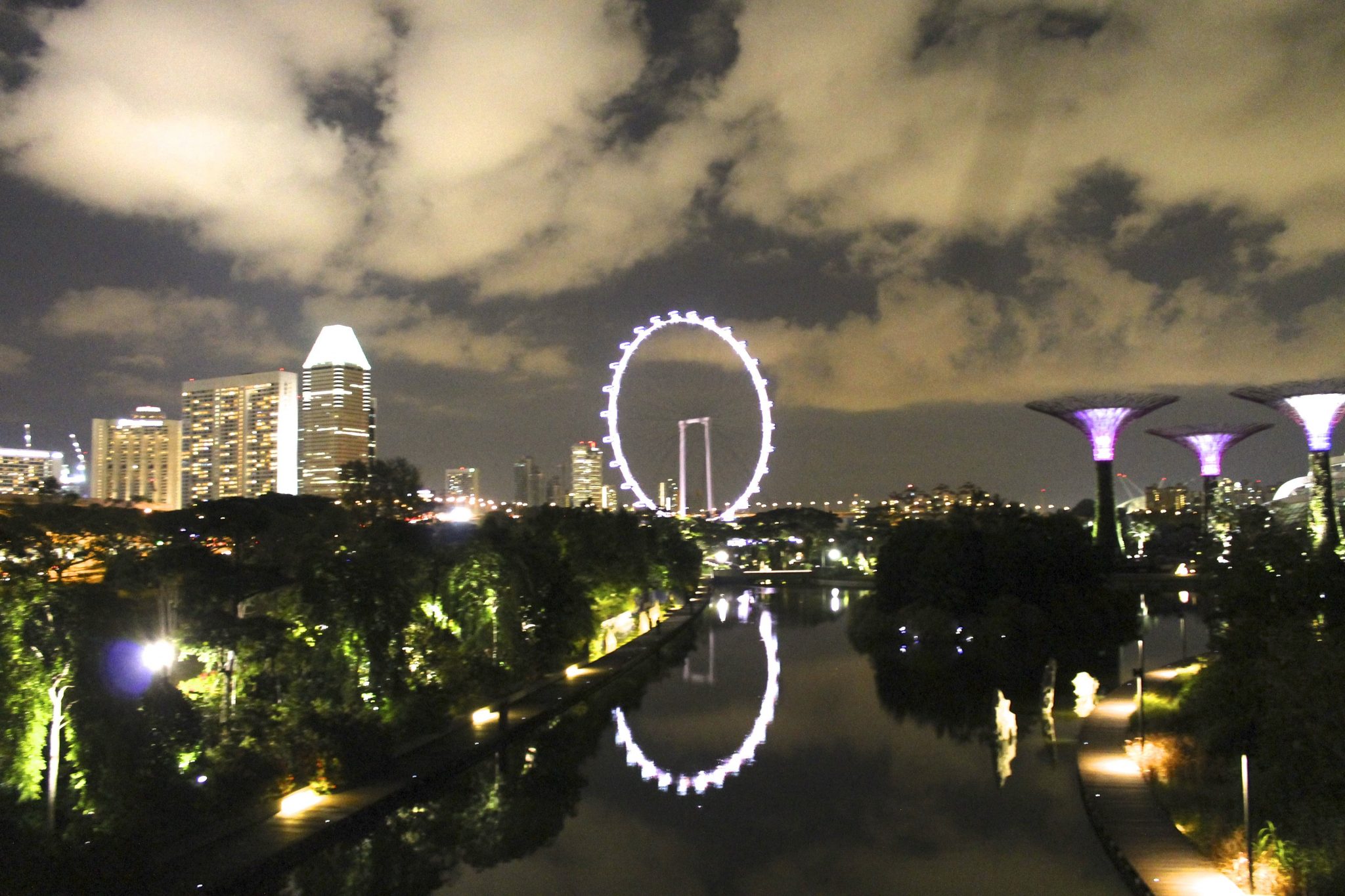 I’m not going to lie, it was a task trying to find this place, but I was determined, from my research it looked like a real life Avatar-esque world. To get to Gardens by the Bay, I had to go through a hotel that looks like a boat, you can’t miss it, it’s called the Marina Bay Sands. I took the elevator from just outside the hotel to the second floor, and walked through the hotel – and its beautiful inside architecture. The path eventually lead me to Gardens by the Bay, which is a treat to the eyes and senses. 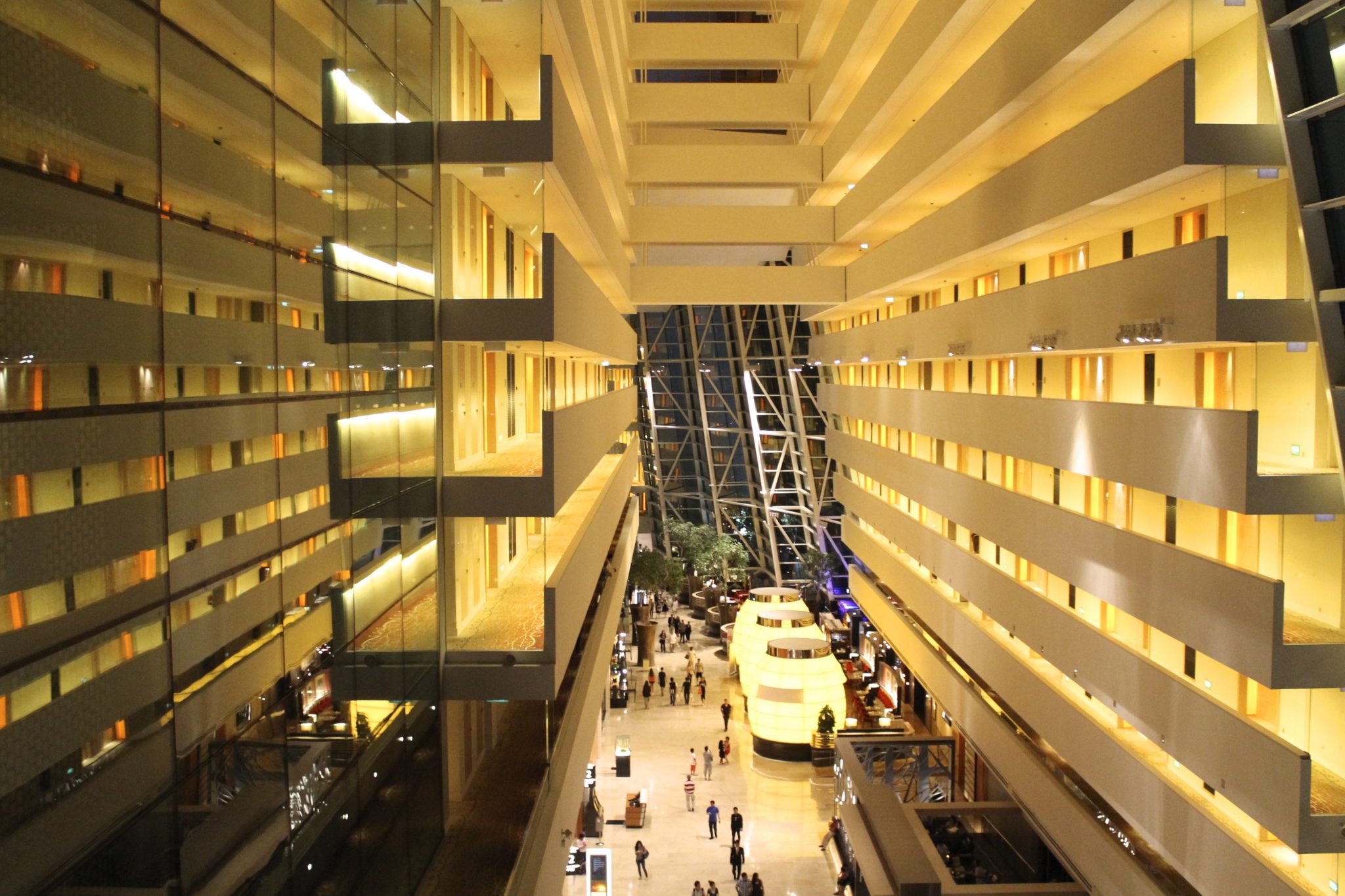 Gardens by the Bay is one of the coolest places I have been to, and it’s quite hard to describe unless you’ve been there in person. Sadly, I was only able to go at night, but I think it would be gorgeous during the day as well. Basically, it involves multiple towers in the shape of flowers aligned in a whimsical way, they light up in different colors, while an instrumental soundtrack plays in the background. 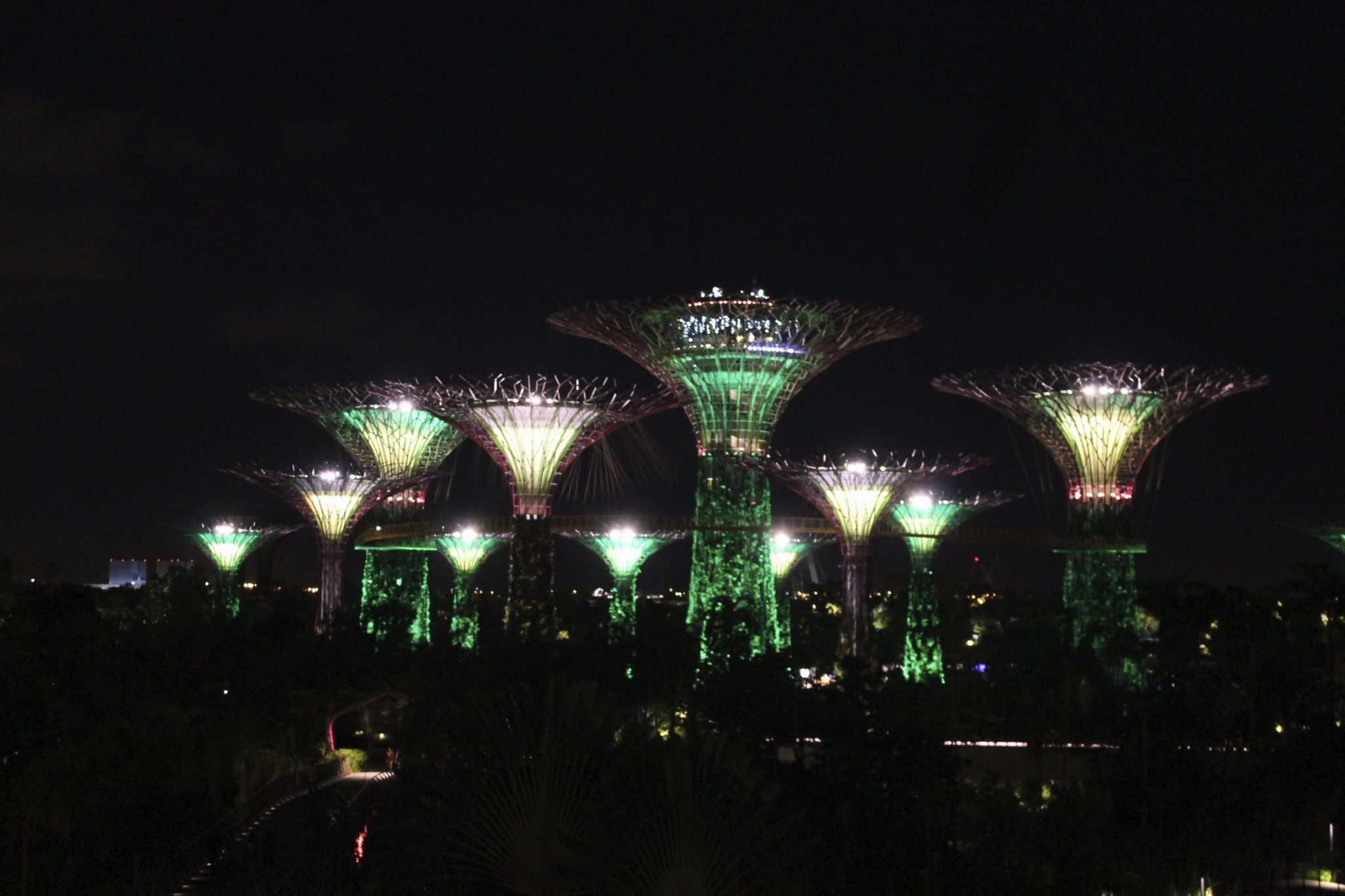 Maybe it doesn’t sound like much, but once you go you’ll see how unique of an experience Gardens by the Bay is. I especially loved the fact that they used color and music in sync to make you feel different moods and emotions.

All I can say is go there if you have any time in Singapore, you will not be disappointed. It’s especially a fun thing to do if you’re traveling with kids in Singapore (or you’re just a kid at heart like me). 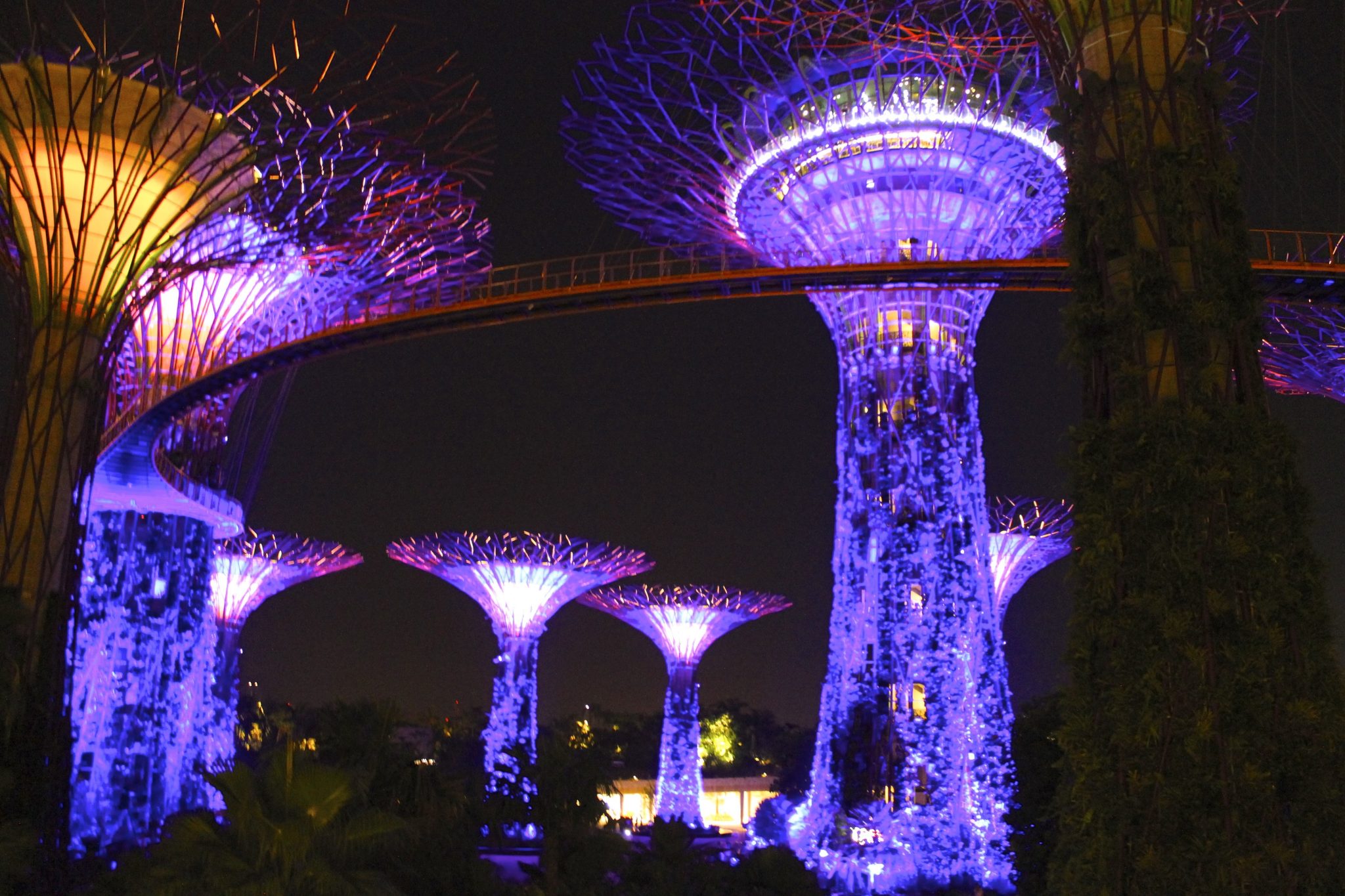 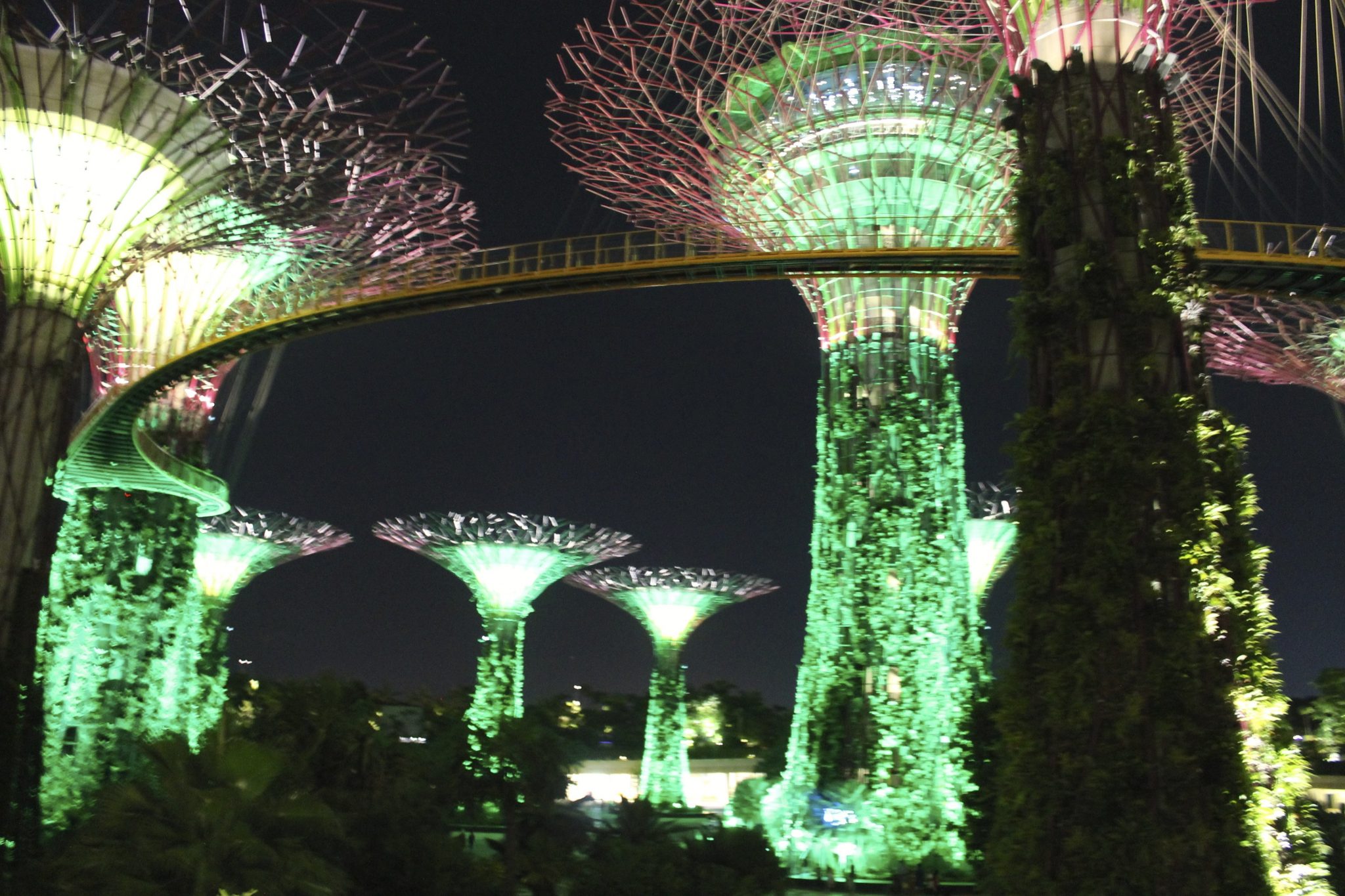 At this point, I was exhausted from the escapades of the day and headed back to the hostel. The next morning, before my flight, I went to go see the iconic Merlion statue, a mermaid lion which became the national mascot of Singapore in the 1960s, and which is supposed to represent Singapore’s origins as a fishing village. It is one of the weirdest statues I have come across, and a perfect way to end my short stop over in Singapore. 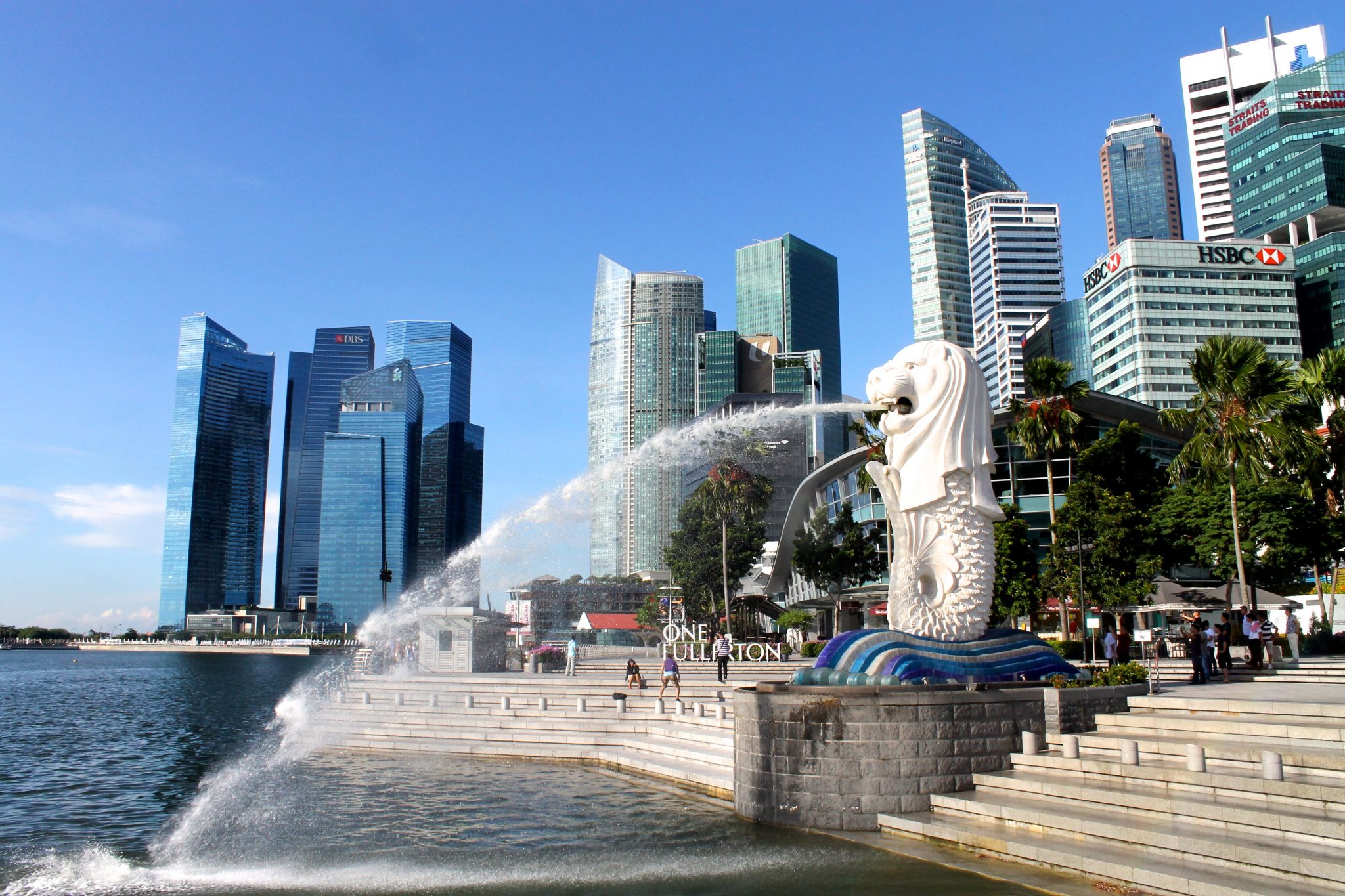 I must admit, Singapore, you’ve stolen my heart a bit. Until next time.