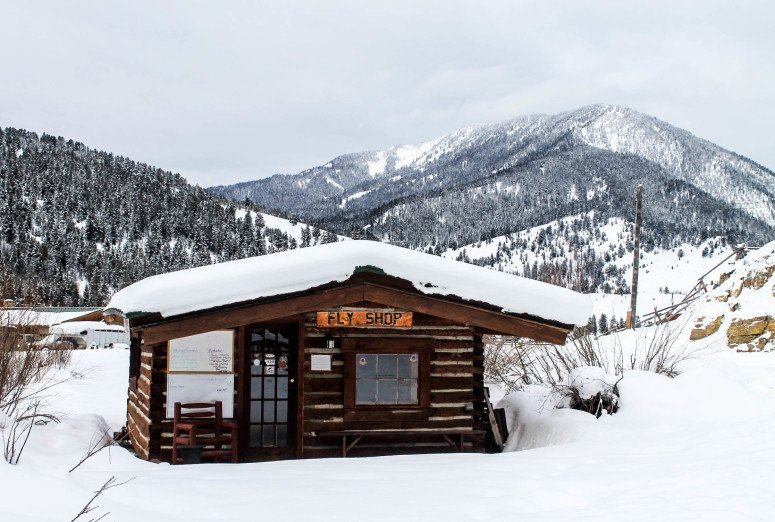 Think back to the late 19th Century, a time when the West was for the brave and wild-hearted, a place for adventurers. Sam Wilson was one of these classic westerners. He laid the foundation for what is now the 320 Guest Ranch in southern Montana in 1898 with his 160 acre homestead along the Gallatin River.

A couple of years later, this land would be expanded on further by Sam’s father, who joined in his 160 acres next door to create the Buffalo Horn Resort in 1900. The ranch continued to change hands throughout the decades, until the current owner, Dave Brask, took it over in 1987 and expanded on the original accommodations and services to create what we know today as the 320 Guest Ranch.

We found our way to the ranch after a day of snowboarding at Big Sky Resort, just 30 minutes down the road. We easily found the entrance, drove over the bridge with the icy water on either side of us, and continued on down the long driveway to check-in. I had an overwhelming feeling at that moment that this is the real Montana, or at least what I always expected it to be.

As soon as you drive through the land and get out to walk around the cabins, you can feel an enticing history surround you. It’s the history of a beloved place that has been tucked away for over a century, a place for passing visitors who are lucky enough to find it.

Related: 6 Things to Do in Missoula, Montana 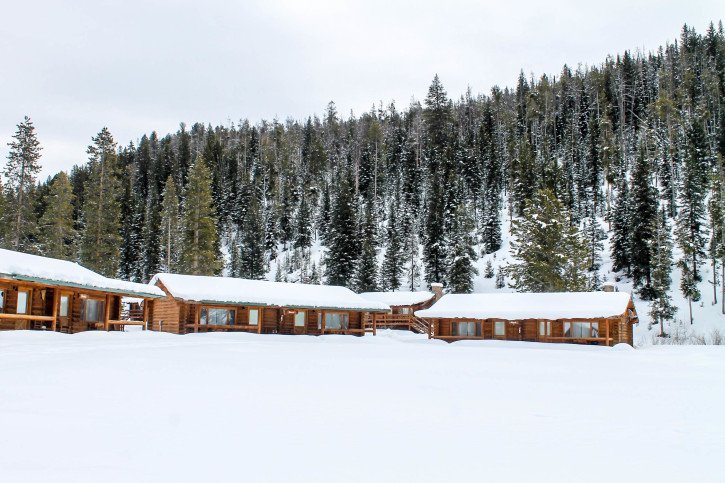 When I stepped out of the car that first time at 320 Guest Ranch, I finally understood the meaning of why Montana is called Big Sky Country – the sky seemed to roll on for miles upon miles in the distance. Everything was open, fresh, and wonderfully stunning with the new fallen snow. The winter wonderland that encapsulated the log cabins and buildings only added to the comfort I felt from first glance.

I wasn’t sure what to expect with staying at a guest ranch, it’s not something I had ever experienced before. And although I went in with no expectations, I was still blown away by the hospitality and the personal touches I found at 320.

I hope I’ve already given you a good idea about the ambiance I found at the ranch. In a word, I would describe it as rustic, but it’s hard to just stop there. The furnishings all had that old western feel, but the amenities were modern (thankfully!) and the staff were some of the friendliest I’ve come across in Montana – and that’s saying something.

320 Guest Ranch was warm, cozy, and wintery in the best ways possible. It was the perfect retreat to relax in for a couple of nights and disconnect from the world. 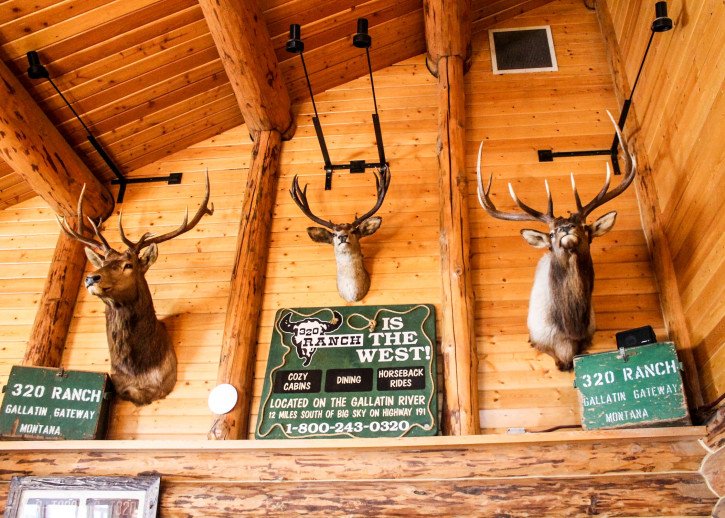 Did anyone else play with Lincoln Logs when they were kids? Well if you had, you would know how awesome a log cabin can be. I had never stayed in a legitimate log cabin before and it was everything my childhood dreams had wished for. 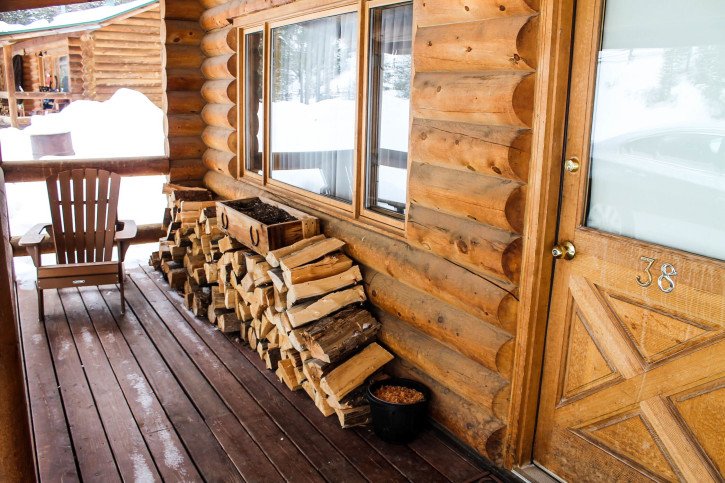 The room was spotless when we walked in and it was quickly warmed by the fireplace IN OUR ROOM. There was fresh firewood and kindling out on the porch for us to use whenever we wanted to warm up near the fire. There was also a TV, which we unashamedly watched red neck TV on (i.e. Diesel Brothers), a view of the lovely snow outside, and a very cozy king-sized bed.

Related: A Guide to the Best Missoula Breweries 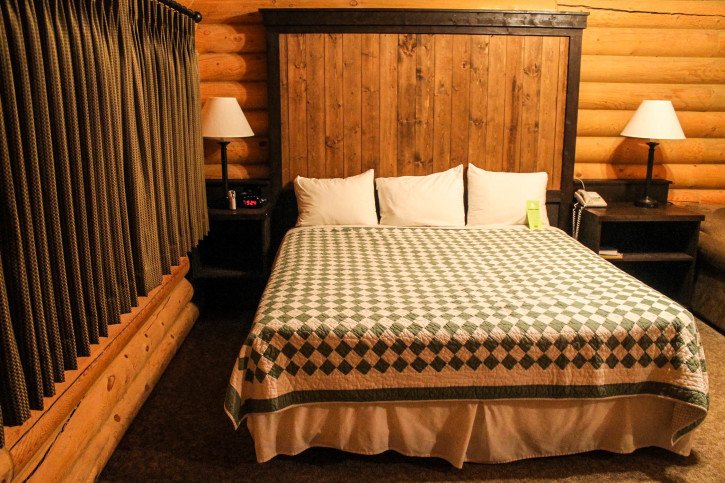 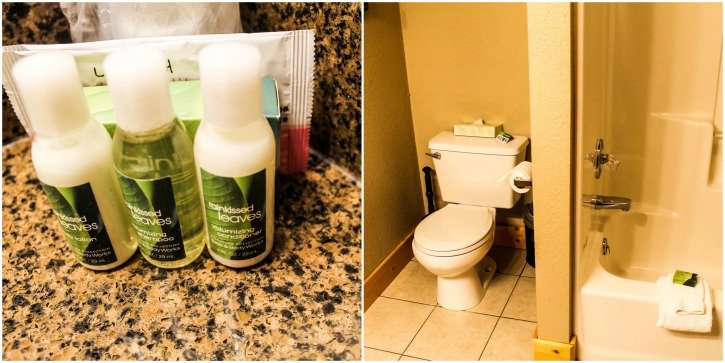 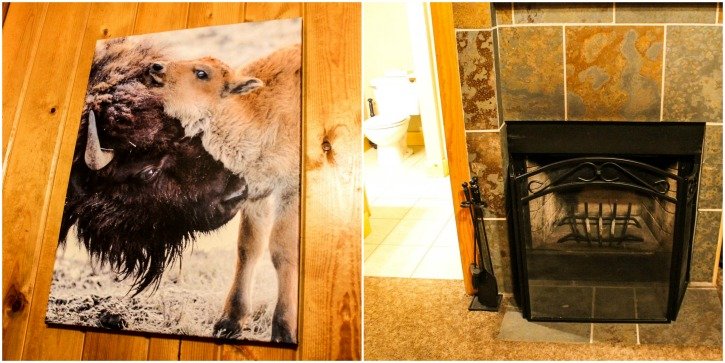 The log cabins are split between two rooms on either side, so we shared a wall with one other room, but other than that you were cut off from the outside world as soon as you stepped inside the warm confines of your room.

I would consider the location to be slightly backcountry Montana, although the long driveway to get to 320 is off a fairly major road. Even with the feeling of solitude you have when you’re staying at the ranch, you’re really not all that far from other attractions and cities if you think about it. 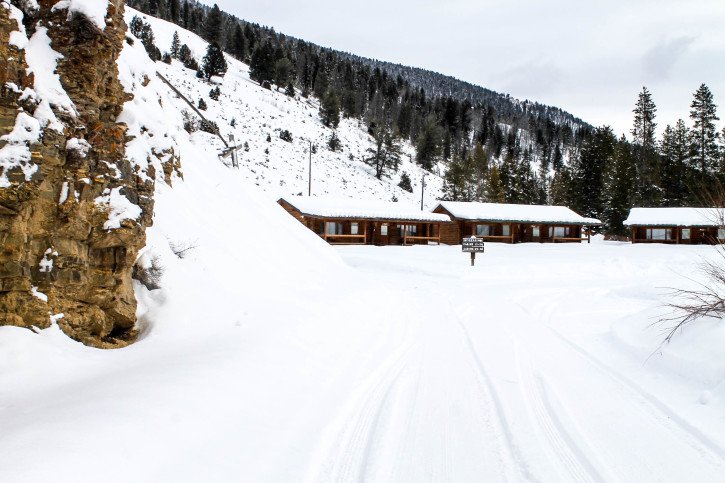 Big Sky Resort – the biggest skiing in America – is only a 30 minute drive away. The famous Yellowstone National Park is pretty much right next door as well, although in the winter a lot of roads are closed to the park so you may have to book a tour instead. The charming city of Bozeman is not even that far from the ranch at just over an hour’s drive away.

I found this to be one of the best aspects to 320 Guest Ranch. The fact that it felt as if you were a million miles away from everything with a huge sky of stars above you each night, but if you wanted to go exploring during the day you had plenty of options  to choose from. 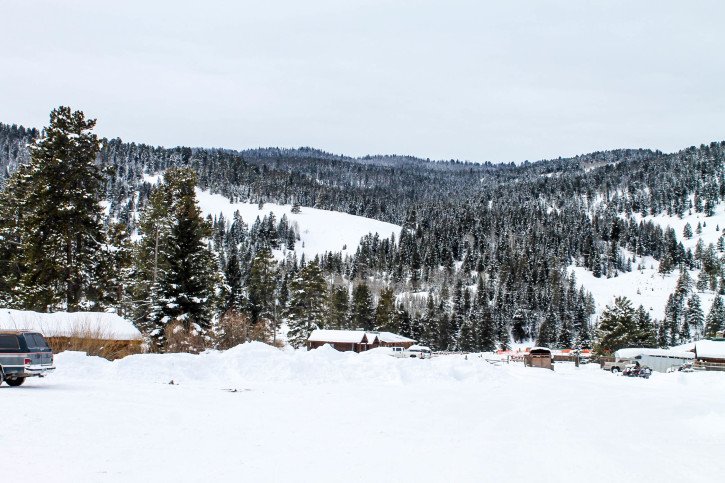 The steakhouse, which calls itself ‘cowboy gourmet’, is the only restaurant at 320 Guest Ranch and it’s actually attached to Sam Wilson’s original homestead cabin from 1898. 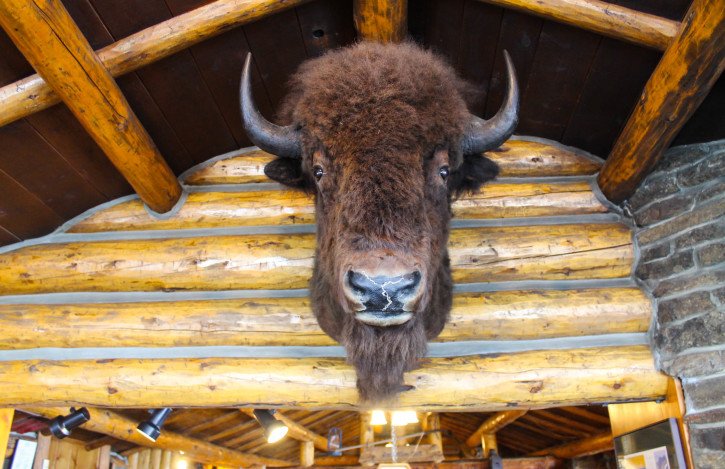 The homestead cabin now houses the small saloon and pool table as well. The steakhouse is where you have complimentary breakfast each morning – which was delicious by the way – and also where they have a dinner service each night. They’re closed for lunch during the winter. 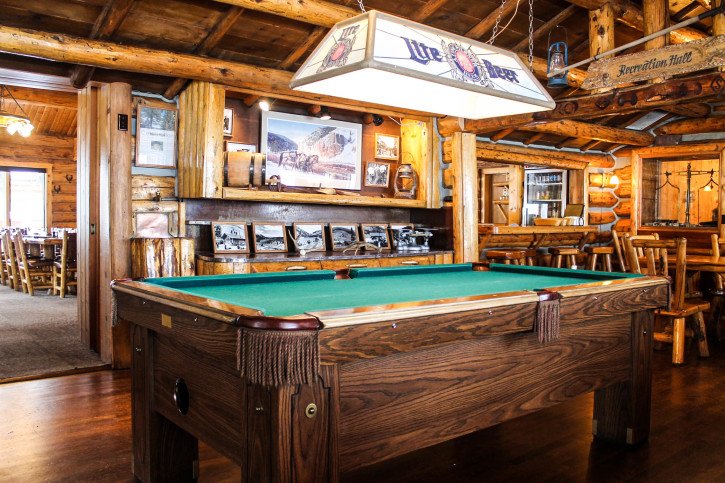 The steakhouse is fairly pricey with meals that cost anywhere from $20-$40 a piece, but once you try the food you’ll know that the quality was worth the splurge. I don’t think I’ve ever eaten as much meat as I did at 320, but both nights we ate at the restaurant I was more than pleased with what I tasted.

We tried buffalo, elk, salmon, and lamb for our stay. The buffalo was fantastic, but the elk was other worldly, it was that good. I would also recommend trying out their tasty handmade sorbet at the end of your meal as well, no matter how cold it is. So yum! 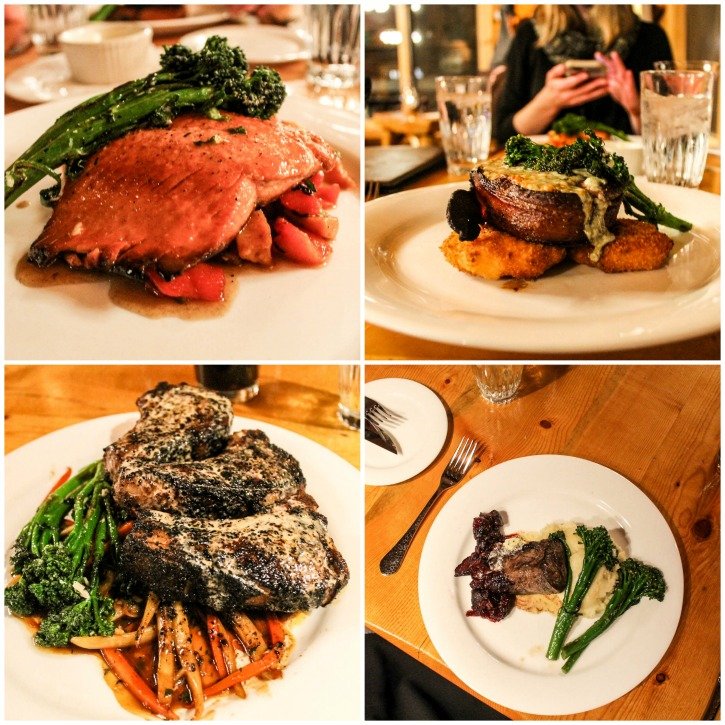 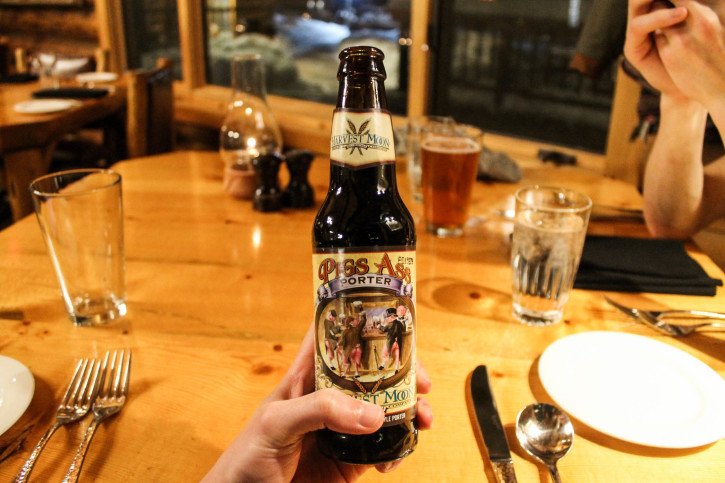 You’ll notice antler art and taxidermy trophies all over Montana, but the ones at 320 Ranch had some serious history behind them. There was one elk (or possibly deer) trophy in the saloon that had been there for over 100 years. A bear pelt over the bar order window was shot by the bartender himself. Yes, this was definitely the real Montana! 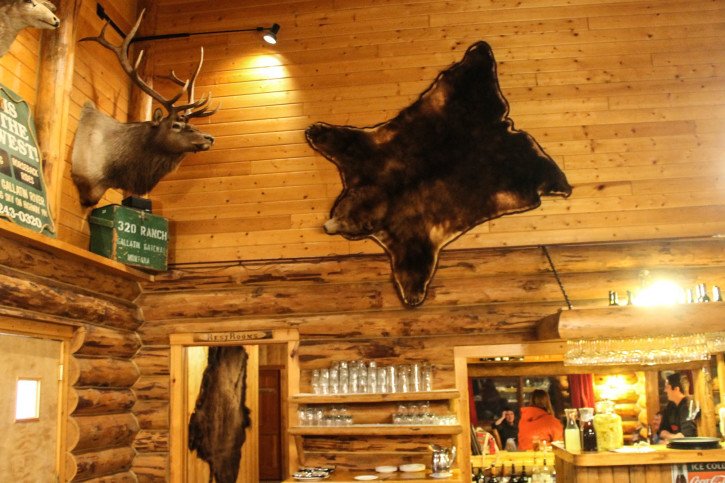 I also really loved the art that was around the steakhouse, done by the same local artist, Gary Carter.

One of the biggest highlights that 320 Guest Ranch offers guests in the summer is fly fishing. If you visit Montana at all, you’ll know how huge of an industry fly fishing is, and 320 Guest Ranch is in the perfect location for those guests who come to Montana specifically for the sport. The Gallatin River actually runs right through the ranch grounds and there are also two blue ribbon rated rivers that are within an hour of the ranch. 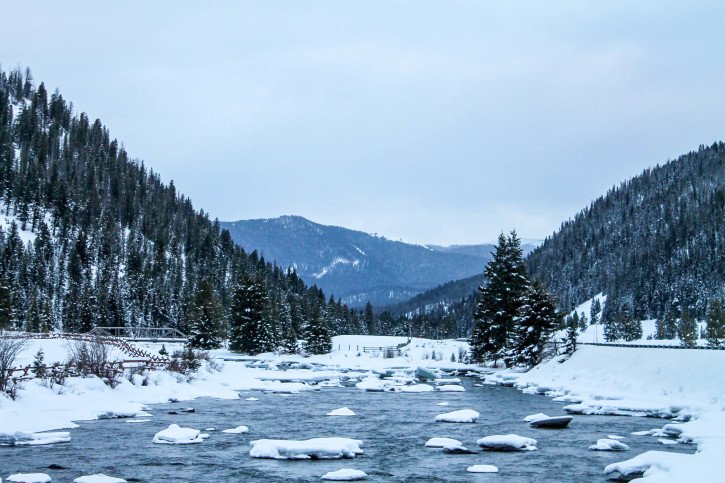 There is free coffee, tea, cable in the cabins, and fast Wi-Fi. The only aspect you will be disconnected from is cell service while at the ranch. The breakfast was one of the better complimentary ones I’ve tried, with eggs, oatmeal, cereal, sausage, a variety of juice and coffee, and most of the standard fare you’d expect. 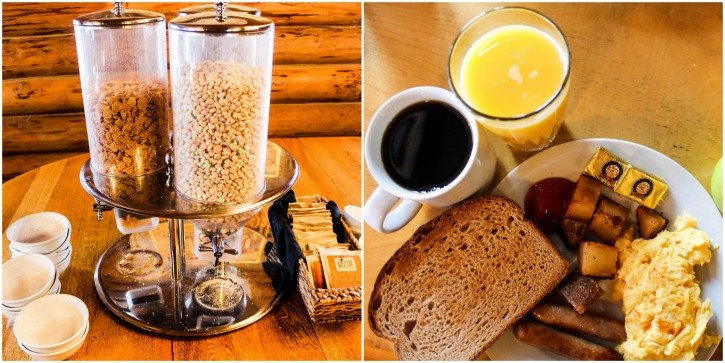 They also had the best stash of Tazo teas I’ve seen in awhile, which is one of my favorite tea brands so I was quite pleased. 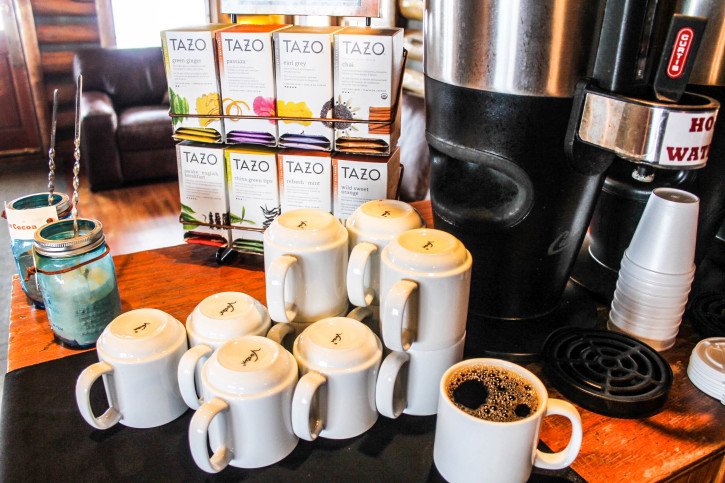 Perhaps my absolute favorite aspect about my stay though was the sleigh ride that 320 offers.

Yes, you heard it right people, 320 Guest Ranch offers guests a sleigh ride during the winter (at an additional cost). It was a magical experience with that blue tint of dusk that Montana seems to take on across the state. 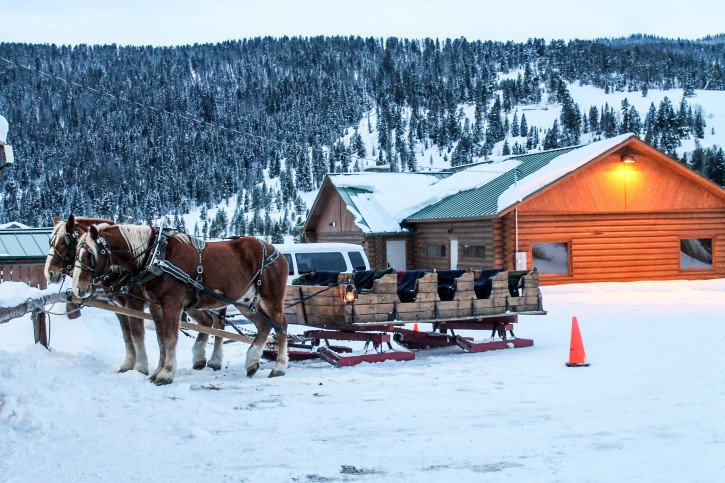 We all piled into the sleigh and took off around the grounds in the brisk night air. We stopped in at a ready-made tent for hot chili, cheese platters, and some warm alcoholic beverages half-way through the ride.

It was unfortunately fairly cloudy the night we went on our sleigh ride, but I could imagine how beautiful the sky must be filled with stars on a clear night. Our guide was from Ohio and had originally come to Montana for only a summer work opportunity. He has been here for years now – he simply couldn’t leave the beauty of the state behind.

Throughout the sleigh ride we heard more about the history of 320 Guest Ranch and the memories within its grounds for over a century.

It was the perfect way to end my time at a guest ranch that I connected with immediately and was sad to leave behind. 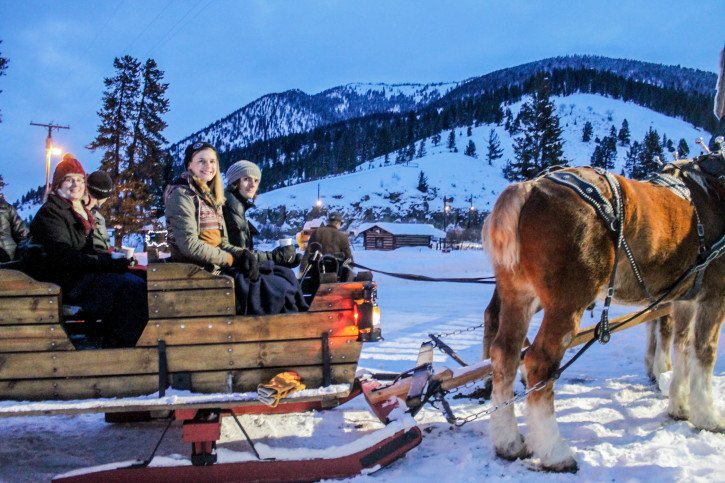 If you’re looking for a place to rest after a day on the slopes at Big Sky Resort, a day trip to Yellowstone, or if you just happen to be traveling around southern Montana, I would put 320 Guest Ranch on your list. I hope to visit the ranch again in the future, it was a historic retreat in the wilderness that represented everything I loved about hometown Montana charm. 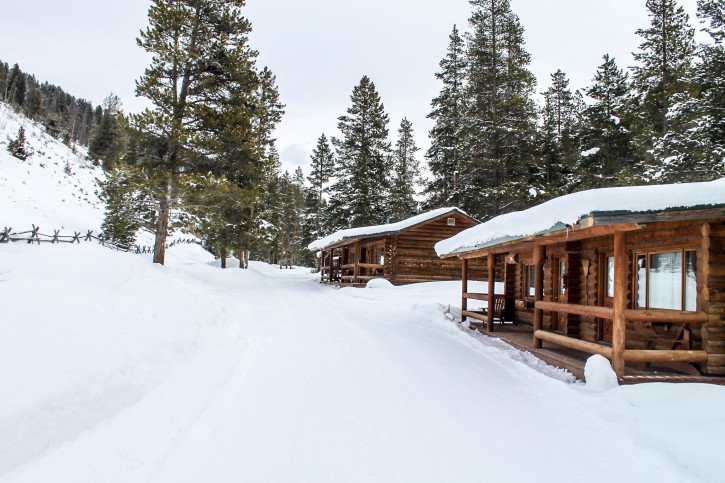 Note: 320 Guest Ranch generously hosted me for my stay, but all opinions, as always, are my own. 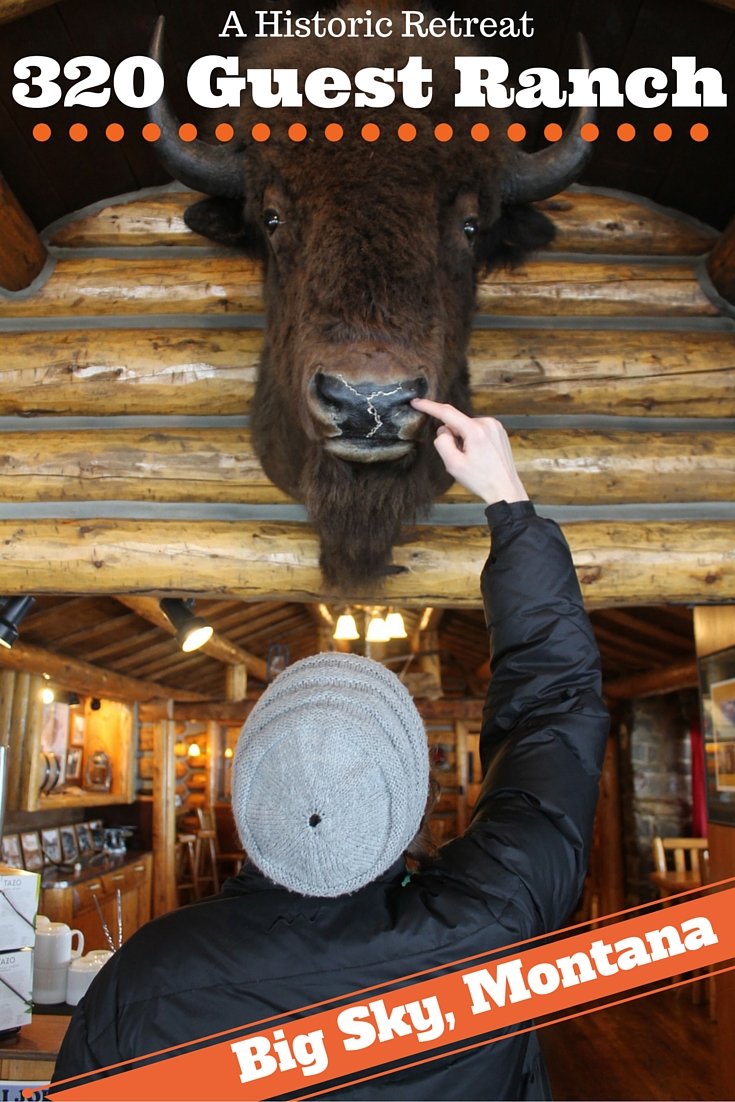 13 thoughts on “A Historic Retreat in Montana: 320 Guest Ranch”