A journey from bay to bay 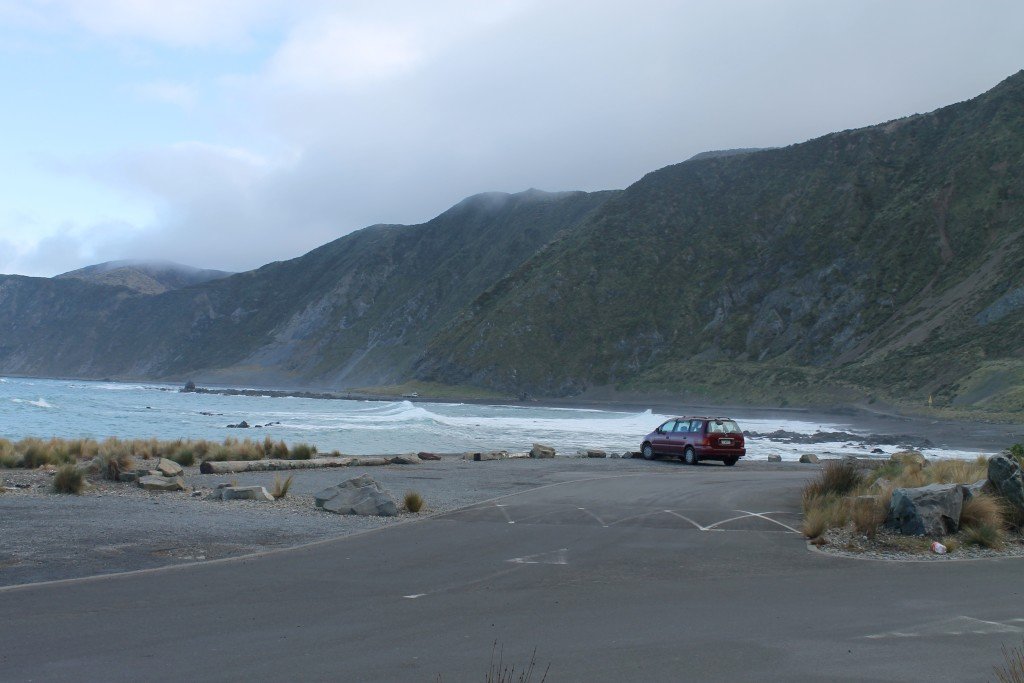 I’ve been juggling a few ideas for day trips around Wellington on my days off, none of which included the nearby Island Bay, until I looked at a map this morning and decided it sounded like a nice place to spend my afternoon.

I’ve come to the conclusion that no matter where you decide to go in New Zealand, you will be rewarded with awesome views and stunning scenery. I’m partial to coastal views especially because of where I grew up, so I’ve recently been drawn to day trips that usually have the word “bay” in them. Luckily with Wellington’s location, you’re spoiled for choice.

I jumped on a bus once I convinced myself to leave behind the warmth of my house and the comfort of my onesie, and was pleased to discover another side of Wellington that is so close to me! Only about a 10 minute or so bus ride from my suburb, Newtown, Island Bay is a feast for the eyes – I still cringe when I reference eyes after last night’s Game of Thrones, eek! – let’s just say it was a beauty in its own right.

After taking way too many pictures in the first bay I saw, and constantly oohing and ahhing when I found another angle I liked of the same exact beach, I decided I had to keep moving if I wanted to accomplish anything on my trip. 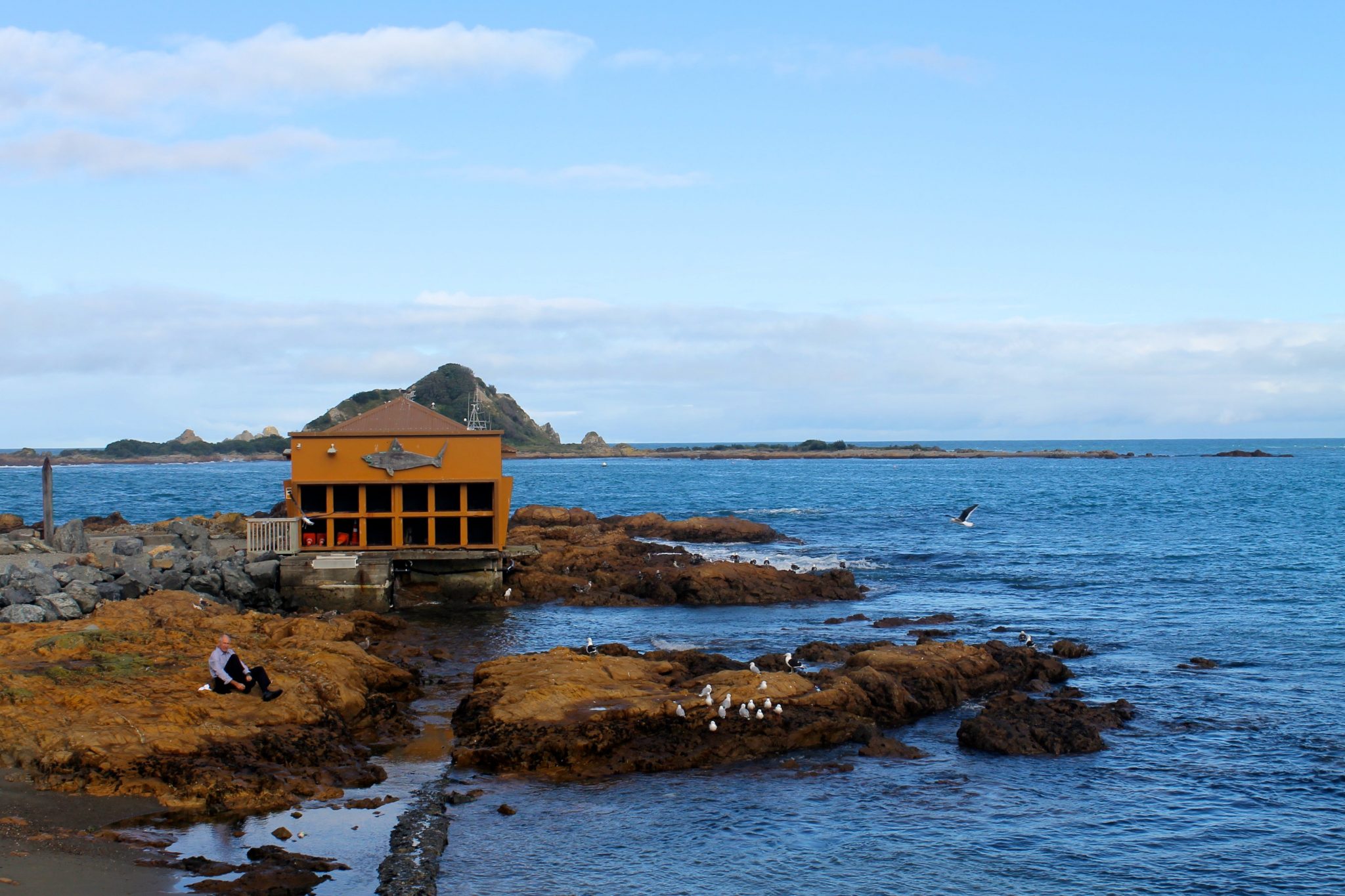 I started walking towards Lyall Bay, when I came across a map of Taputeranga Marine Reserve. First of all, I had no idea that I had stumbled across a marine reserve, and the map showed that it went all the way around Owhiro Bay in the opposite direction. Cool stops along the way like “The Siren Rocks”, “Tsunami area”, and the “Old Quarry”, solidified my decision to take a detour and add another hour onto my adventure.

I turned around and started walking in the the direction of the Old Quarry on a cold but (mostly) cloudless day. I’d say if you come across a rainbow, it’s a pretty damn good day.

I saw The Siren Rocks which made me think of Odysseus in The Odyssey (did anyone else have to trudge through the Illiad and the Odyssey in high school!? Fun times). I eventually came to the Old Quarry and entrance to the Sinclair Head trail. I was very tempted to continue on, because the area you had to walk through had a high tsunami warning if there was to be an earthquake (sounded a bit dangerous), and there was a promise of a seal colony on the other side of it. 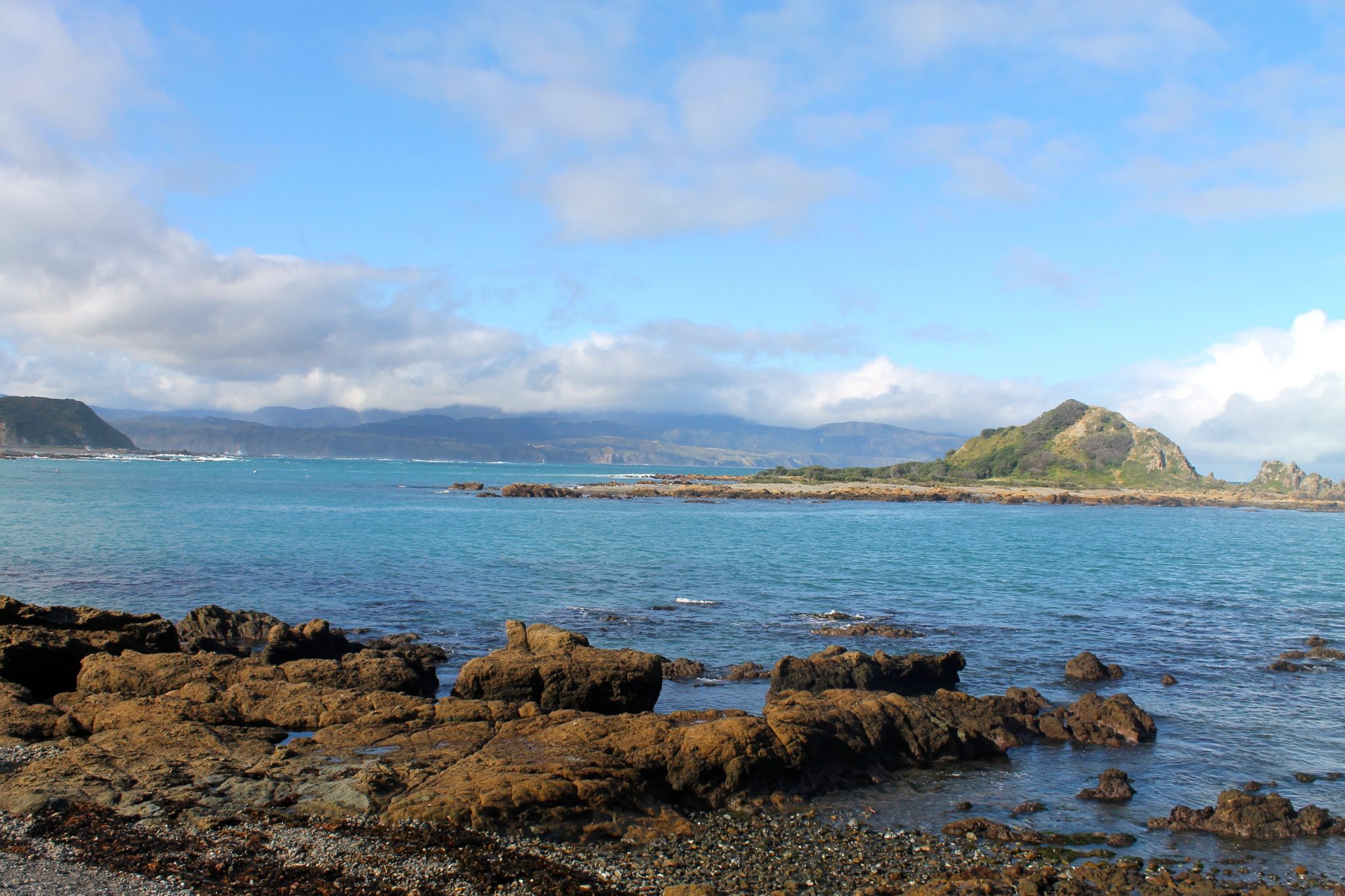 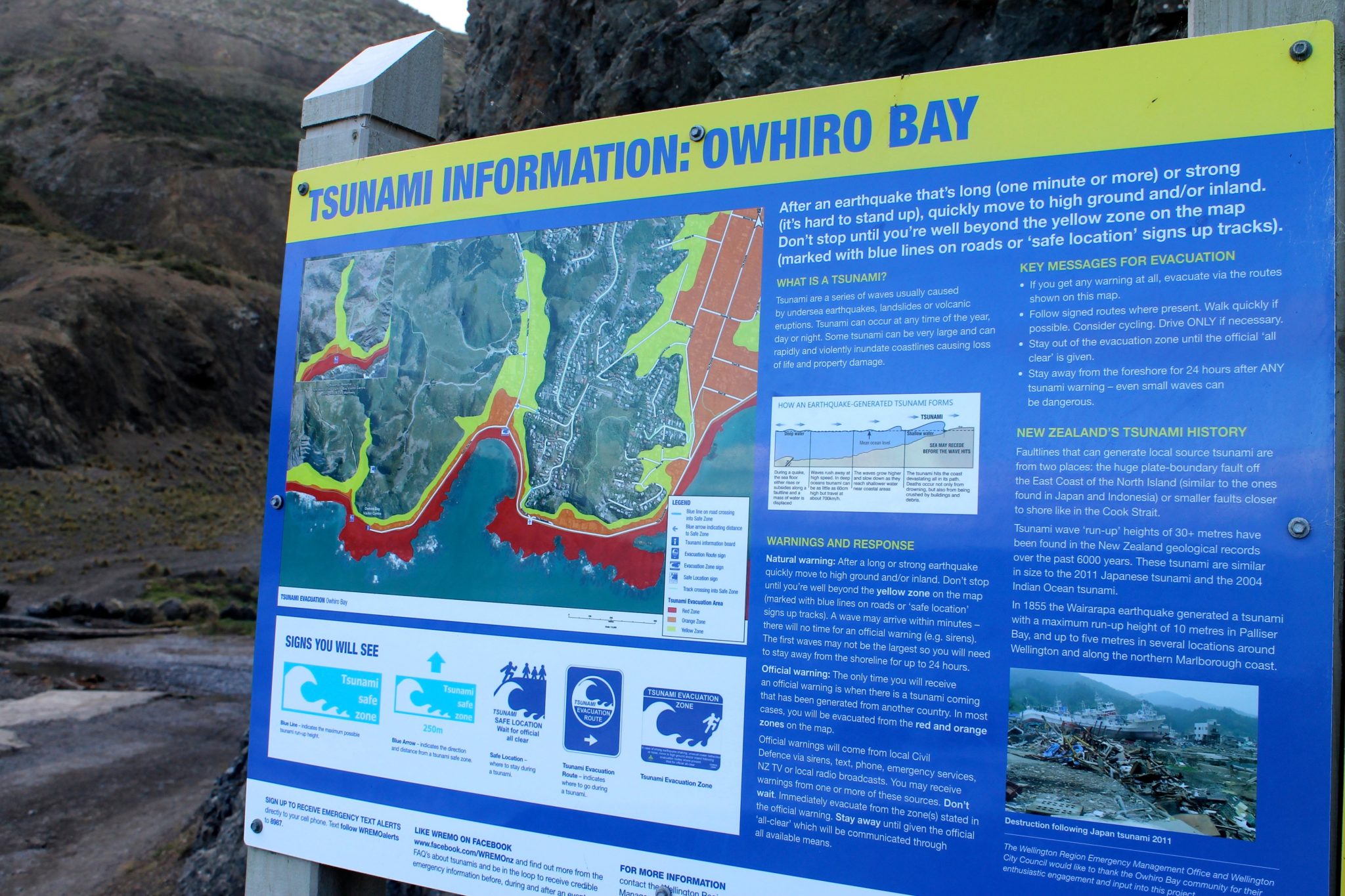 However, my goal today, when looking at a map this morning was to finally see Lyall Bay on the other side of the coast, so I decided to save the hike for another day and retraced my steps back to Island Bay.

I came across many more bays as I zig zagged in and out of the uneven land while walking the coast. Owhiro Bay, Island Bay, Houghton Bay, Waitaha Cove, Lyall Bay, to name a few. Each one had their own character and unique placement tucked within the coastal land. 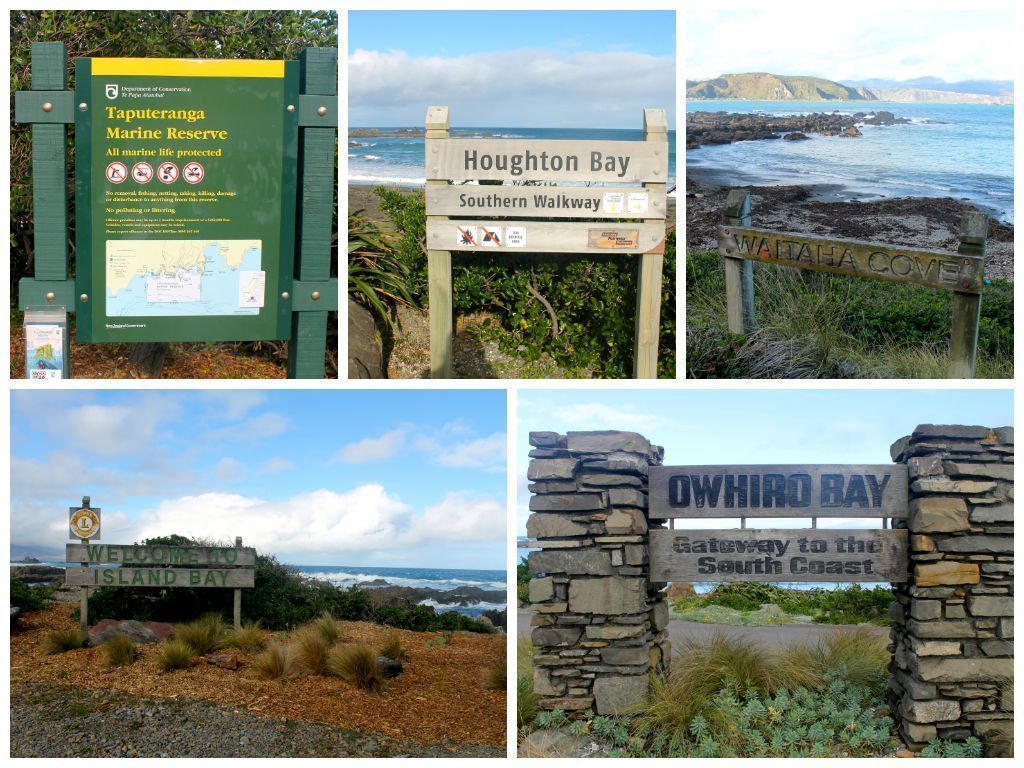 The walk took me about 2.5 hours, including doubling back in order to see Owhiro Bay. The walk was similar to a longer and more rugged walk of West Cliff in Santa Cruz, California. I also saw some really cool Kiwi houses. If there is one thing I’ve learned about Kiwis since arriving in Wellington, they have a certain flair when it comes to their architecture. 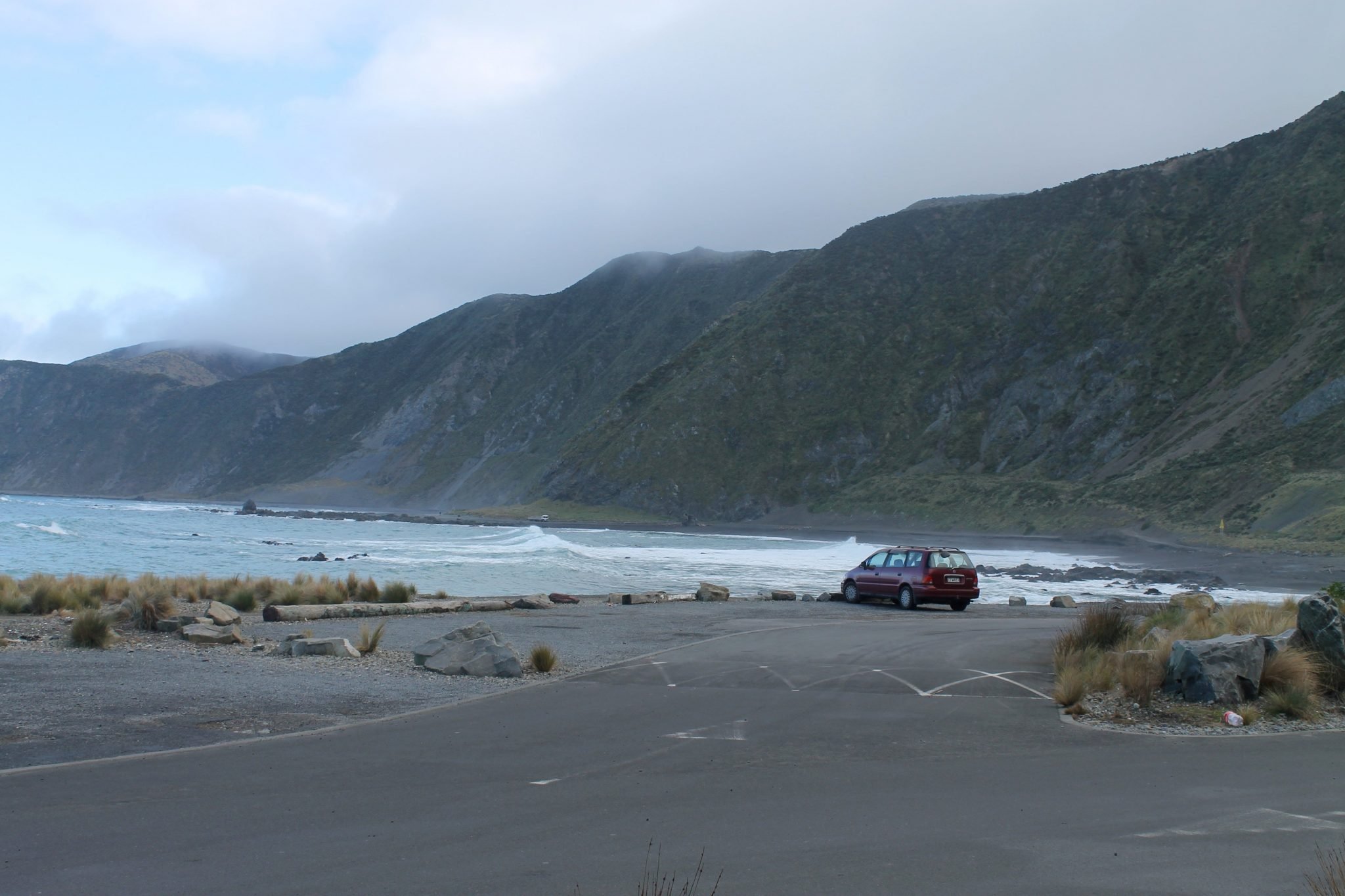 I particularly liked a house I deemed The Godfather House, because it had horse heads on the outside, and one that literally had a boat attached to the upper level. Creativity right there, I like it.

Island Bay and Houghton Bay were my favorites for their beauty and manageable size, Houghton Bay’s waves seemed especially good for surfing. Lyall Bay was huge (also known for its surfing), and is right next to the airport, so you can see planes taking off and landing while eating lunch overlooking the bay.

The unfortunate thing about most of these bays (besides maybe Lyall), is that there are signs posted everywhere warning you that you shouldn’t go swimming within 48 hours following heavy rain because there’s a high risk of pollution.

I was wondering why Days Bay is more popular in terms of a swimming hole outside the city, because I was much more blown away by Island Bay and beyond, but the signs explain why it might not be an ideal place to take a dip.

Regardless, the Taputeranga Marine Reserve is a popular place to go scuba diving, and there’s even a snorkel trail, similar to Gordons Bay in Sydney, Australia, and tidal pools at The Siren Rocks. 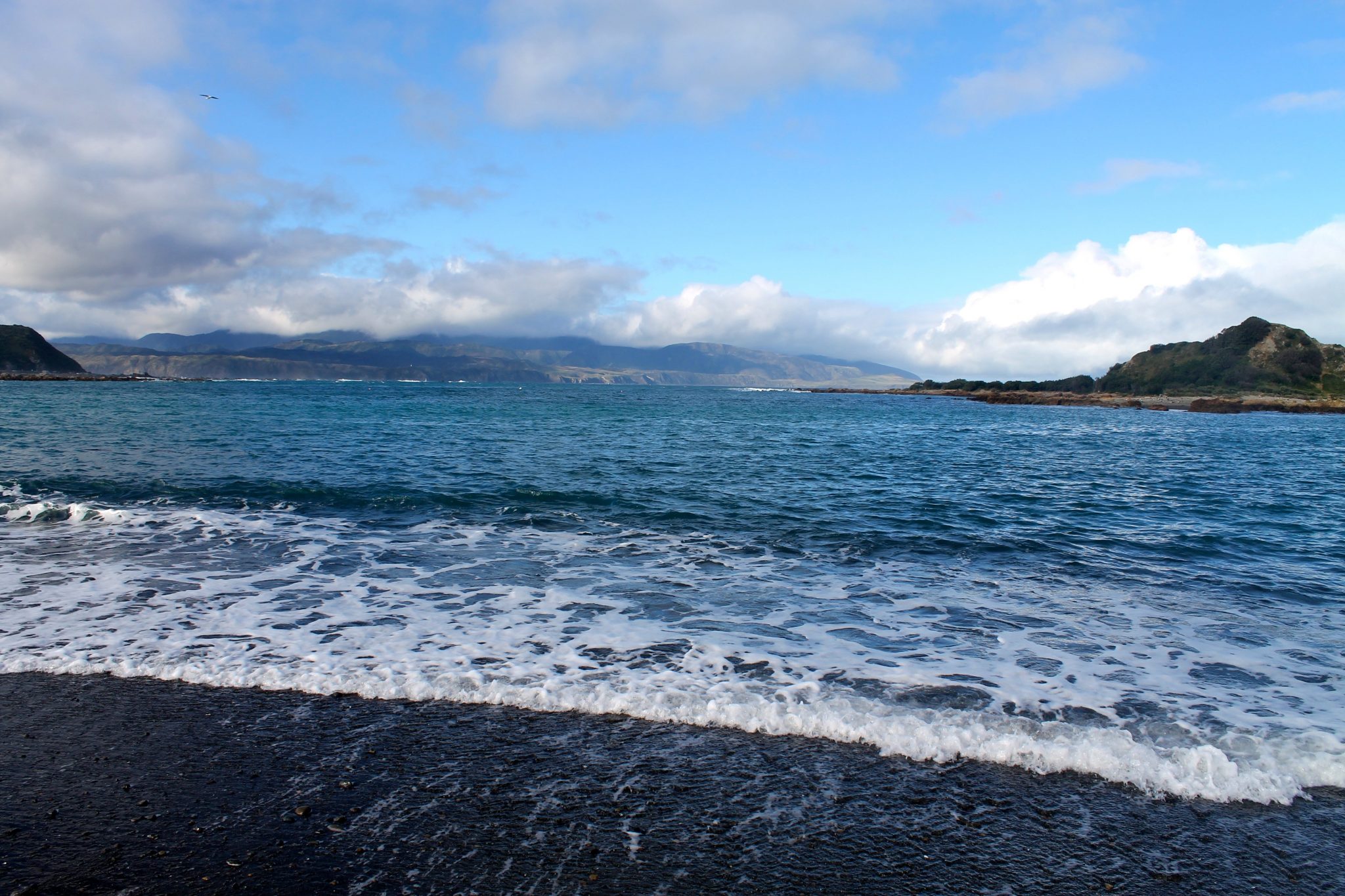 Have you ever been to the bays encompassing the Taputeranga Marine Reserve? Any recommendations for more day trips that I can take around Wellington?