A land of hobbits: where to indulge in The Lord of the Rings 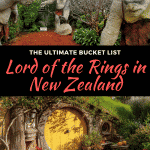 As I’ve mentioned before, I’m not a fanatic of Lord of the Rings. I did finally see the 3rd movie in the 3-part series the other day, but I still haven’t seen the 2nd Hobbit movie, and most faux pas of all, I haven’t read any of the books.

With that said, it’s hard not to get wrapped up in The Lord of the Rings mania, you find it everywhere, and especially in Wellington where Peter Jackson calls home, it’s hard not to hear about a lot of hobbit related things.

There are countless tours, some lasting 2 weeks or more that take you to all of the movie locations around the country, and then there are a couple of hot spots that I would personally recommend, if you don’t want to spend a fortune and still want to get in on the fun.

The two places I would recommend in New Zealand are the Weta Cave and Hobbiton, both in the North Island.

Here’s a little write up of both to give you an idea of what you’ll find there.

From the city of Wellington, you’ll find The Weta Cave tucked away in a little house-like complex in the cozy suburb of Miramar. It’s an unsuspecting little place until you walk past the life-like cave trolls situated on the front lawn, having been turned to stone from the sun, obviously. The actual Weta Cave is free entry, it includes a screening room that shows you video (re-played every 30 minutes) of a bit of the history  behind the workshop, and a lot of memorabilia from multiple movies to keep you busy and entertained.

To take the workshop tour, which I highly recommend, it costs $24 for 45 minutes, and you get a guide that actually works at the workshop, so it’s very hands on. There are no pictures allowed inside the workshop because that would just spoil the fun for all the new movies they’re currently working on. When I went, I had a personal tour as it was the middle of Winter and low season, and I lucked out with an affable and knowledgable guide that worked as a painter for making the variety of sets. He was a hoot.

Normally, you’re not really allowed to to touch the props, especially the ones still being made for current movies, but the guide let me hold fake guns, sit in a vehicle from the Halo movie, feel the difference between real and movie-esque chainmail, and hold swords used by some of the greats in LOTR. On top of getting up close and personal with the guns, swords and monsters, because it is the actual workshop where the design happens, you’re able to see the artists at work and see up and coming movies come to life through one prop or prosthetic at a time.

The Oscar-winning workshop is open 7 days a week, from 9am-5:30pm, and is a great place to start learning about the movie studio presence in Wellington. The Weta Workshop has worked on a variety of films besides the LOTR and The Hobbit franchise. They’ve helped create props and digital effects for the likes of Avatar, The Amazing Spiderman 2, Godzilla, District 9, The Adventures of Tin Tin, and countless others. If you’re looking for the perfect Lord of the Rings themed souvenir, an expensive replica of the one ring, or a look into the New Zealand movie business, The Weta Cave is worth a visit.

Oh, and dorky poses with the cave trolls out front make for a good memory too. Most people have heard about Hobbiton, the magical place where Hobbits live (in the movie only, sadly), a movie set that has been rebuilt between The LOTR and The Hobbit movies, and has been left as it was during the filming of the last Hobbit movie. Located in Matamata, you could either take the tour from the little country town itself (least expensive option), or you can take a tour bus from Rotorua or Auckland, as it lies between the both of them. It’s 52 minutes outside of Rotorua, and about 2 hours outside of Auckland, so it just depends on which is most convenient for your location and time.

Although I knew it was going to be a tourist trap of sorts, I wasn’t expecting the extent of how overrun with tourists it would actually be.

To be fair, we did go on possibly one of the busiest days of the year, the day before New Year’s Eve, but the lines to see individual Hobbit holes were edging towards the ridiculous wait time end of the spectrum.

We also didn’t luck out on the caliber of people with us on the tour. We had a large group of verging on elderly Americans, mostly women – who called themselves “successfully single”- and who were absolutely horrible. No manners, impatient, pushy, complaining constantly, they basically took every bad stereotype given to Americans, and somehow surpassed it.

We actually apologized to our Kiwi bus driver at the end of the tour, because we were embarrassed for our nationality. It was that bad. Yikes. Regardless of the negative side I found at Hobbiton, there was a lot of good aspects as well, and that good is what convinced me it was still a day well spent and an activity I would personally recommend to anyone visiting New Zealand. The attention to detail with how Peter Jackson creates all of his sets is astounding, Hobbiton was another level altogether. Everything was thought out and taken care of to make it look like the lived in land of the Shire. Little touches, such as the little pots of honey near the road, the personal gardens that are still taken care of by professional gardeners, the hobbit-sized clothing hanging out to dry above a hobbit hole. The fact that during filming one set hand’s job was to take down and put up that clothing multiple times to create a faint outline of footprints in the grass to make it look realistic, now that’s what I call dedication. During the tour, we were blessed with an outgoing and witty young uni student tour guide, who had worked at Hobbiton for years, and knew everything there was to know about the place, and had many an inside story to keep us interested and laughing.

The land that makes up the Shire is so much bigger than you would expect, The Green Dragon pub exists over the footbridge and there are beers on tap (one of your choice included with the official Hobbiton tour) that were brewed specifically for the movie, and were surprisingly really delicious.

It’s the closest I’ve felt to walking into a movie.

To give you a bit of history on how Hobbiton came about, a movie scout was looking all over New Zealand for the perfect piece of land for the Shire. They first thought of filming outside of Wellington, The Weta Cave was there, after all.

That’s when the scout came across the Alexander Farm outside of the little town of Matamata. Apparently, when the movie scout approached farmer Alexander, he was irritated that he was taken away from the rugby and told the scout to come back after the game. Clearly, a true Kiwi bloke.

Once the Alexanders agreed, it took a massive amount of work to create a real-life Shire. The New Zealand army was called on to build 1.5km of road for all of the vehicles carrying in random assortments of movie set on a daily basis.

37 Hobbit holes were created from scratch, each one unique and different from the next. The oak tree overlooking Bag End was imported from the nearby town of Matamata, and good quality synthetic leaves for the tree were imported from Taiwan, as Peter Jackson wanted them to be a specific color for the movie. It was an alarmingly intricate set that was fun to walk around. From Bilbo’s party lawn, still set-up from the movie, to the Baggins’ hobbit hole at the top of the hill, there was always something new and interesting to take a look at and indulge in a few pictures.

Coming from Rotorua, the tour cost $110 per person, and it was supposed to take around 4.5 hours, but with how crowded it was once we got there, it took closer to 5.5 hours.

From Matamata it takes approximately 3 hours and costs $75 per person, and from Auckland it would depend on which tour company you went with, but plan for a whole day of getting to and from the Shire. Note: To take the official Hobbiton tour, you have to leave either from Matamata or Rotorua, but there are other tour companies that leave from Auckland as well. At the end of the tour, after having enjoyed a pint of Green Dragon beer, you’ll be taken to the gift shop to buy souvenirs. My recommendation would be to grab one of those beers in the bottle.

Hobbiton is the only place in the world where you can buy them, and they’re worth the price, if even simply for the novelty factor and a cool keepsake in the form of a bottle.

Kelsey bought a bottle and we enjoyed it later in the trip when we were in Lake Tekapo. Worth it.

Well, that’s the gist of it, my recommendations for immersing yourself in LOTR fanfare. As much as Kiwis get tired of dealing with fanatics who have never even heard of New Zealand before the movies, it has very much become a part of Kiwi culture, and is something to be celebrated and explored, at least in conjunction with all of the other intriguing aspects of the culture over here.

I guess the only question left is, are you ready to go look for some hobbitses? Are you a fan of LOTR? Have you even been to a place like Hobbiton, or essentially walked into a movie?