Adventures in NSW: The Blue Mountains 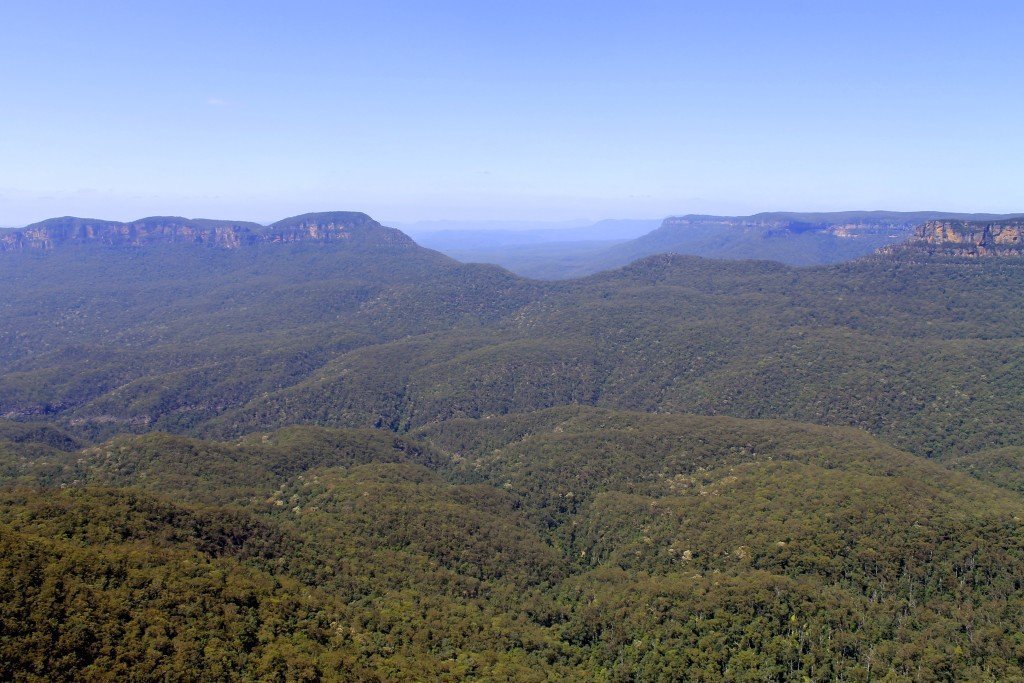 I heard about the Blue Mountains when I was still in Melbourne, the areas surrounding the iconic bushland were in the news for the major wildfires that hit New South Wales in 2013. Luckily, the wildfires didn’t make it as far as the famous Three Sisters lookout, a fact which I was thankful for when I found myself looking out over the scenic landscape a few months later.

Without a doubt, hiking around the Blue Mountains was one of the most magnificent and awe-inspiring experiences I had while in New South Wales. I was planning on taking a day trip to the Blue Mountains at some point during my residence in Sydney, and I found the perfect opportunity when a couple of my friends from San Diego crashed at my place in Double Bay for a few nights.

I gave them ideas for what to do around Sydney, and met them for drinks at Opera Bar when I got off work for the ultimate classy Sydney tourist experience. I brought up my idea of visiting the Blue Mountains, and they were immediately intrigued and willing to go on an adventure with me, even though the only day that worked with our schedules was the day they were leaving the country.

Dave, Brandon, and I woke up at a ridiculously early time (still dark!) and jumped on a train down to Central Station, only to hop on a connecting inner-city train to Katoomba.

The Blue Mountains span a great many country towns, but I chose to start in Katoomba because it seemed like where the main hub of tourist activity began and where the main visitor center is located.

Related: How to Easily Get a Working Holiday Visa for Australia 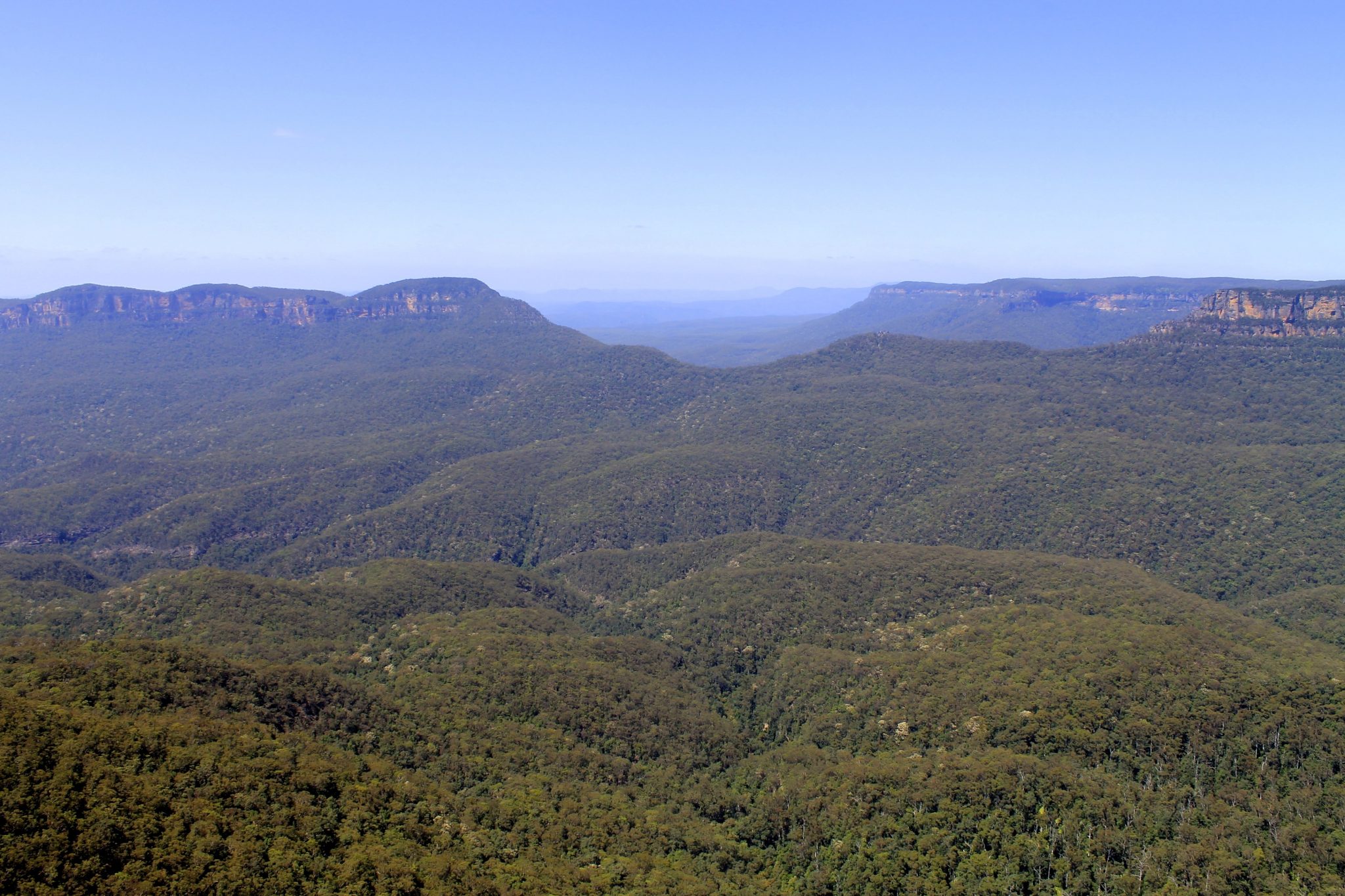 The train ride only took just over two hours, and for some reason we were blessed with a train that had just traveled from the 70’s – I’m talking orange and brown accents and antique yet surprisingly comfy seats. A nice change from the sleek trains I rode most days in Sydney, this one definitely had some character.

I spent the ride listening to music, nodding off into dreamland from being awake at an ungodly time for a bartender, and catching up with Dave. We arrived at Katoomba Station, jumped out and contemplated doing one of the hop-on hop-off Blue Mountain Explorer buses.

Although not my preferred mode of transportation, it was tempting due to the guys’ lack of time. However, the next bus wouldn’t be there for another 30 minutes anyway, so we decided to save on cash and steal their detailed maps for the journey instead.

The walk from the station to the Three Sisters Plaza (the main attraction) was about 20 minutes, and we had a lovely glimpse into the life of mountain suburbia on the way.

When we arrived at the plaza, it was swarming with tourists, and for good reason. The view was breathtaking, glorious, magnificent, insert your favorite word here.

It was a perfectly blue sky day, and the mountains were at their finest, giving off their famous blue hue that blended nicely into the horizon and went off into the distance for miles to see. Forests spanned the great depth that went down into the gorge surrounding the platform. It was beautiful. 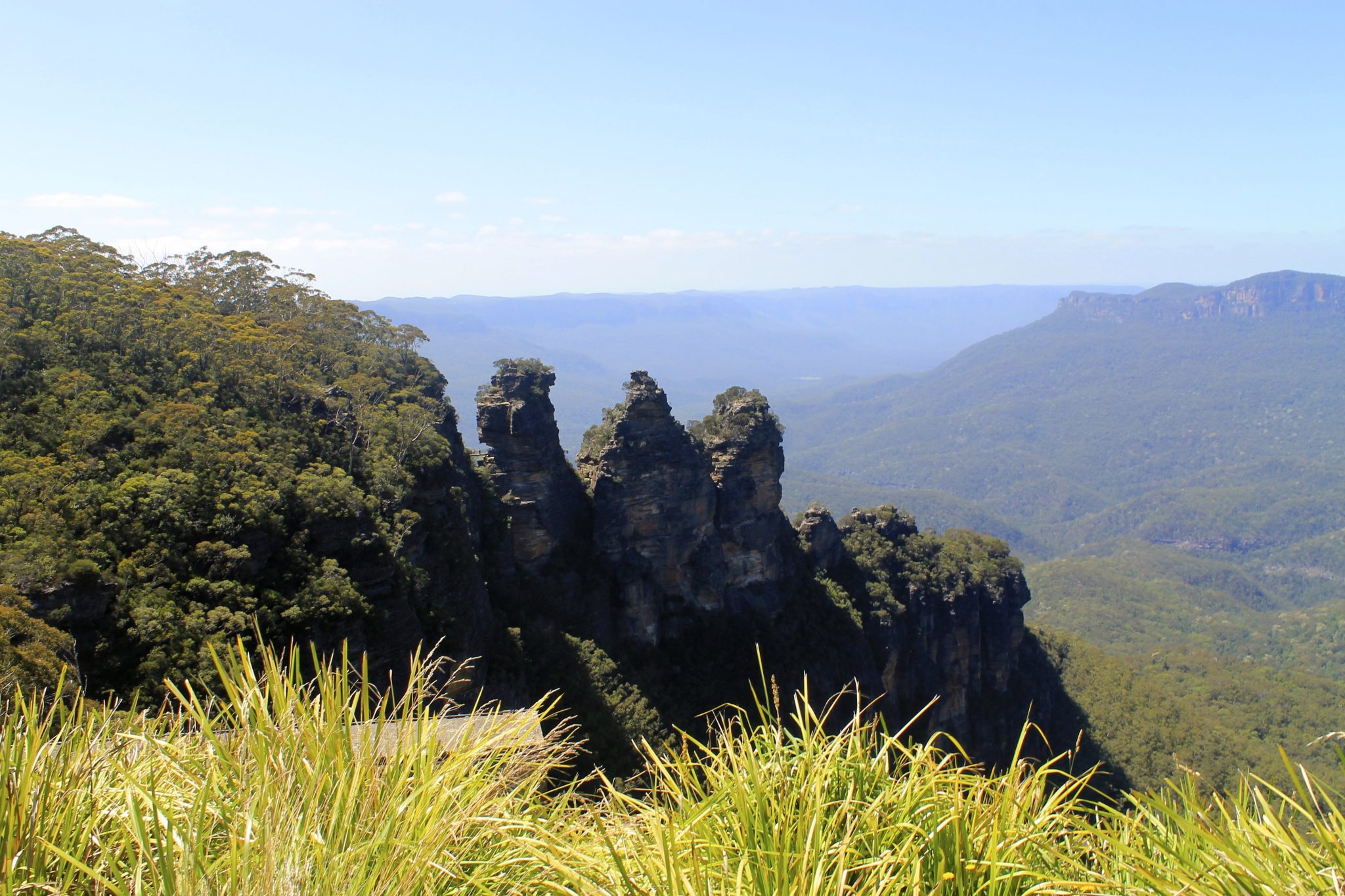 The Three Sisters stood proudly, the center of attention for everyone around. At over 3,000 feet above sea level, the Aboriginal legend behind the landmark is that there was once 3 beautiful sisters from the Katoomba tribe who were in love with 3 warriors from the enemy Nepean tribe. The men decided to try and capture the sisters anyway, which caused a tribal war to break out.

When the sisters found themselves in grave danger, a witchdoctor turned them into stone to protect them until the fighting ended. However, his plan backfired when the witchdoctor himself was killed in the battle, forever leaving the sisters in their stoney appearance.

They stand as a testament to how drop dead gorgeous Australia proves itself to be time and time again.

I was surprised that the mountains were actually blue, I think I’ve been fooled too many times by poorly picked place names. Therefore, I was pleasantly surprised when I looked out over the very blue horizon.

The secret to their blue tint is in the mass forests of Eucalyptus trees. The trees give off oil to the atmosphere, which interacts with water vapor and dust particles to reflect back the blue haze that seems to emanate from the mountains. Science is pretty cool, eh? 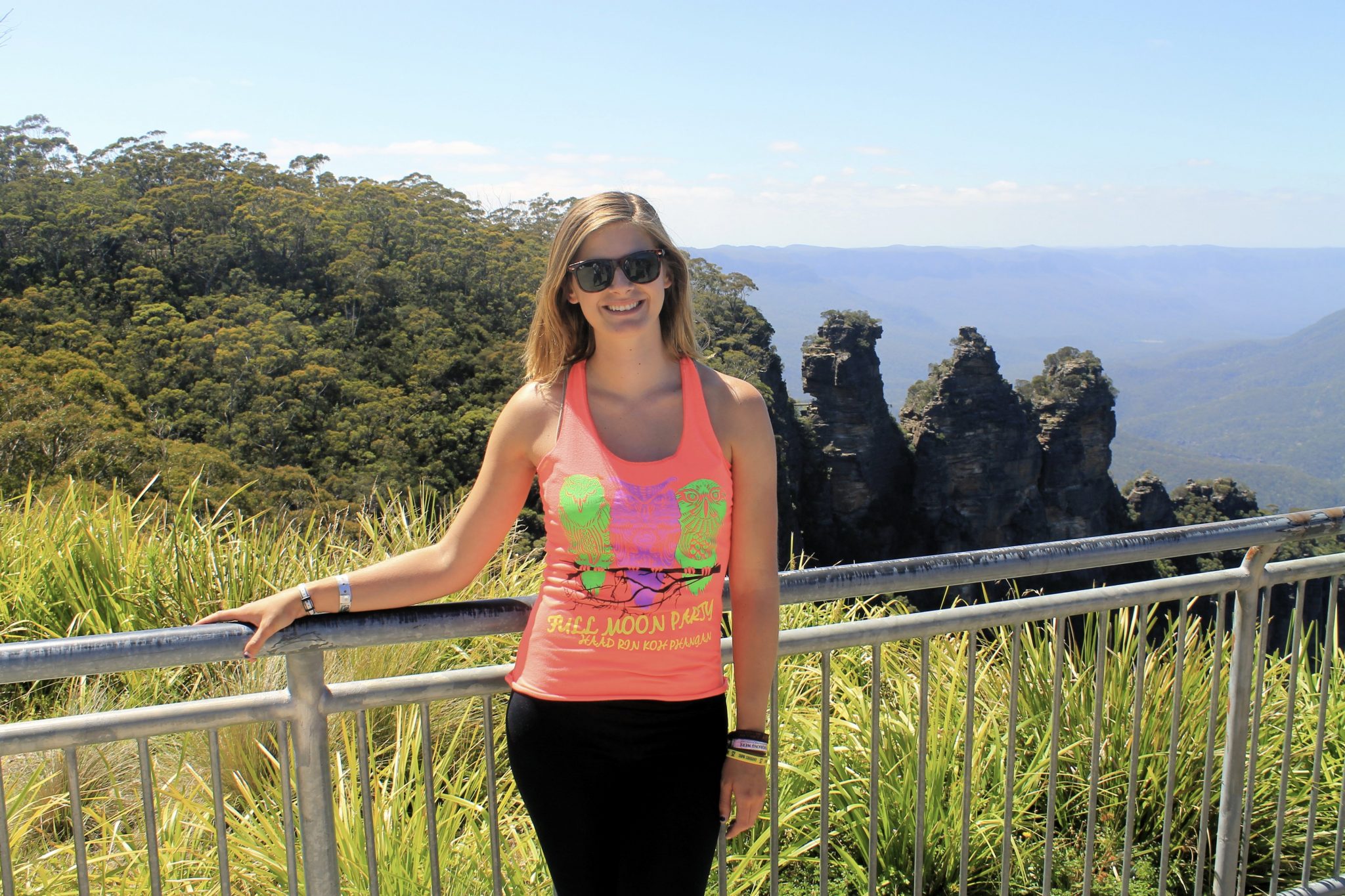 There’s a lot to see, and a lot to hike in the Blue Mountain range, and I would recommend making it at least a two day trip if you have the means. Unfortunately, I only had a day, and only a few hours with the guys before they had to rush back to the Sydney airport. 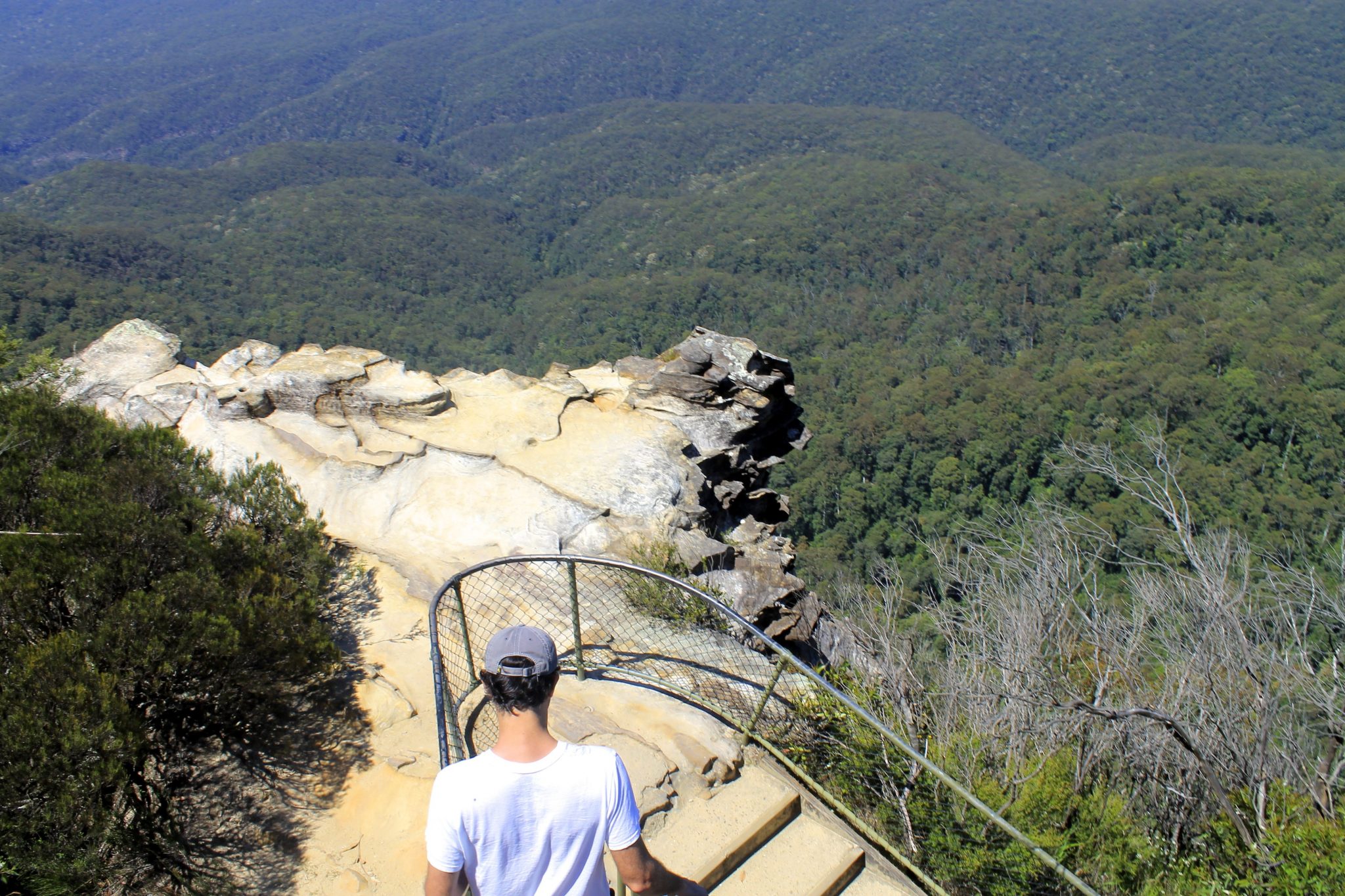 Now there’s a pretty chill cable car that goes across the canyon. Even though it looked like it gave a great view over the immense canyon, the price and the length of the ride didn’t seem to add up, so we decided to walk around the canyon and get in a bit of hiking instead.

The trails were well laid out with complete signage, and a lot of people to interact with on the way. We even met our own Mr. Miyagi and climbed some cascades on our journey.

Starting at Echo Point, where the Three Sisters are located, we walked along the Prince Henry Cliff Walk – which is as cool as it sounds – and saw the Katoomba Cascades along the way, eventually finding our way to the Cliff View Lookout over the Katoomba Falls. Epic view.

By this time, the guys needed to think about heading back into the city, so we hopped on a bus. I said my goodbyes to them and got off at Echo Point again, my hiking shoes were made for walking, and I had just begun. 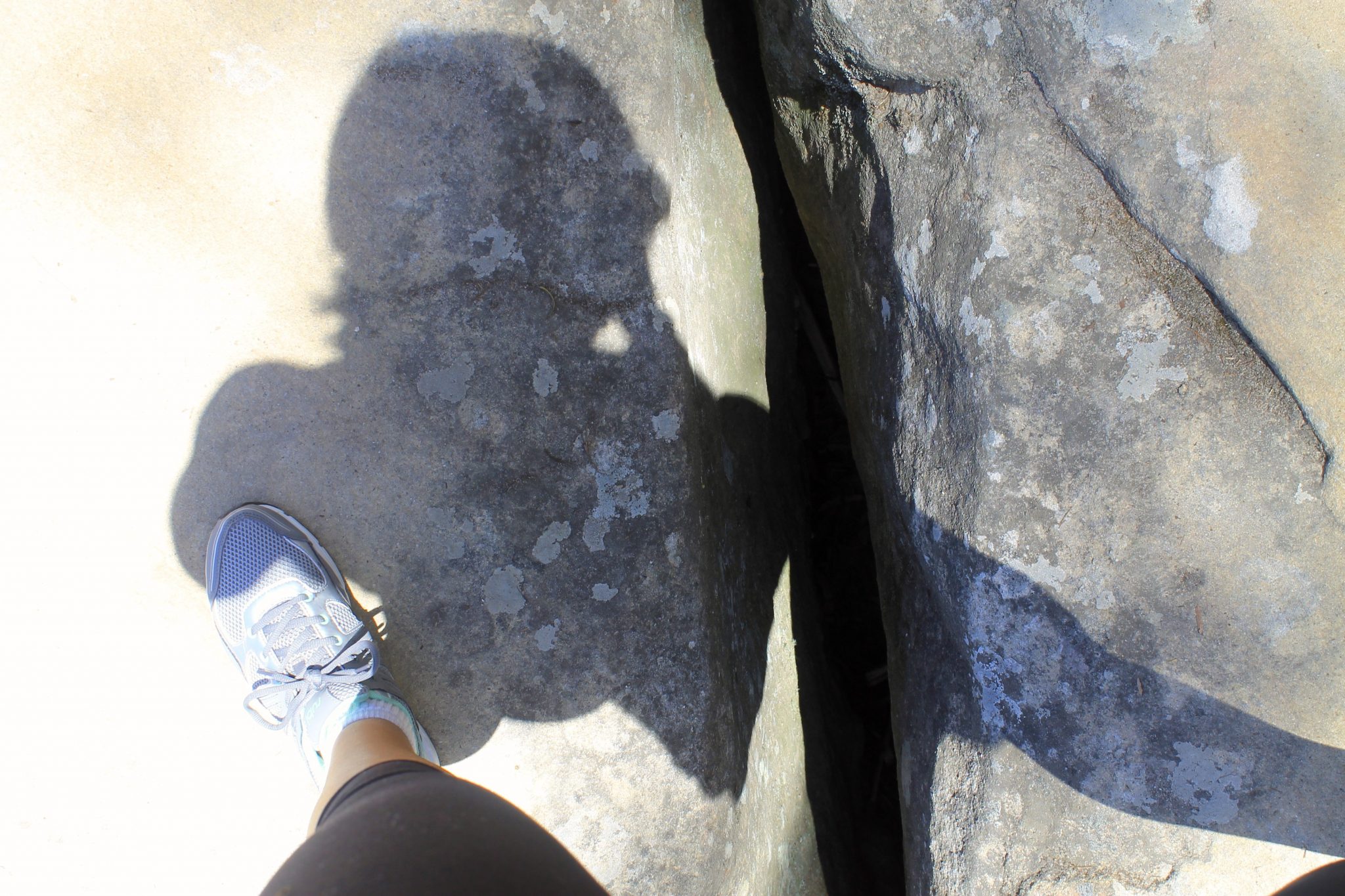 From Echo Point, I walked along the Three Sisters Track and came across the Giant Stairway, where you can actually get up close and personal with the sisters and touch them.

The full trail was blocked off because there had recently been a major landslide, which was a promising fact to think about when I was making my way down into the canyon. 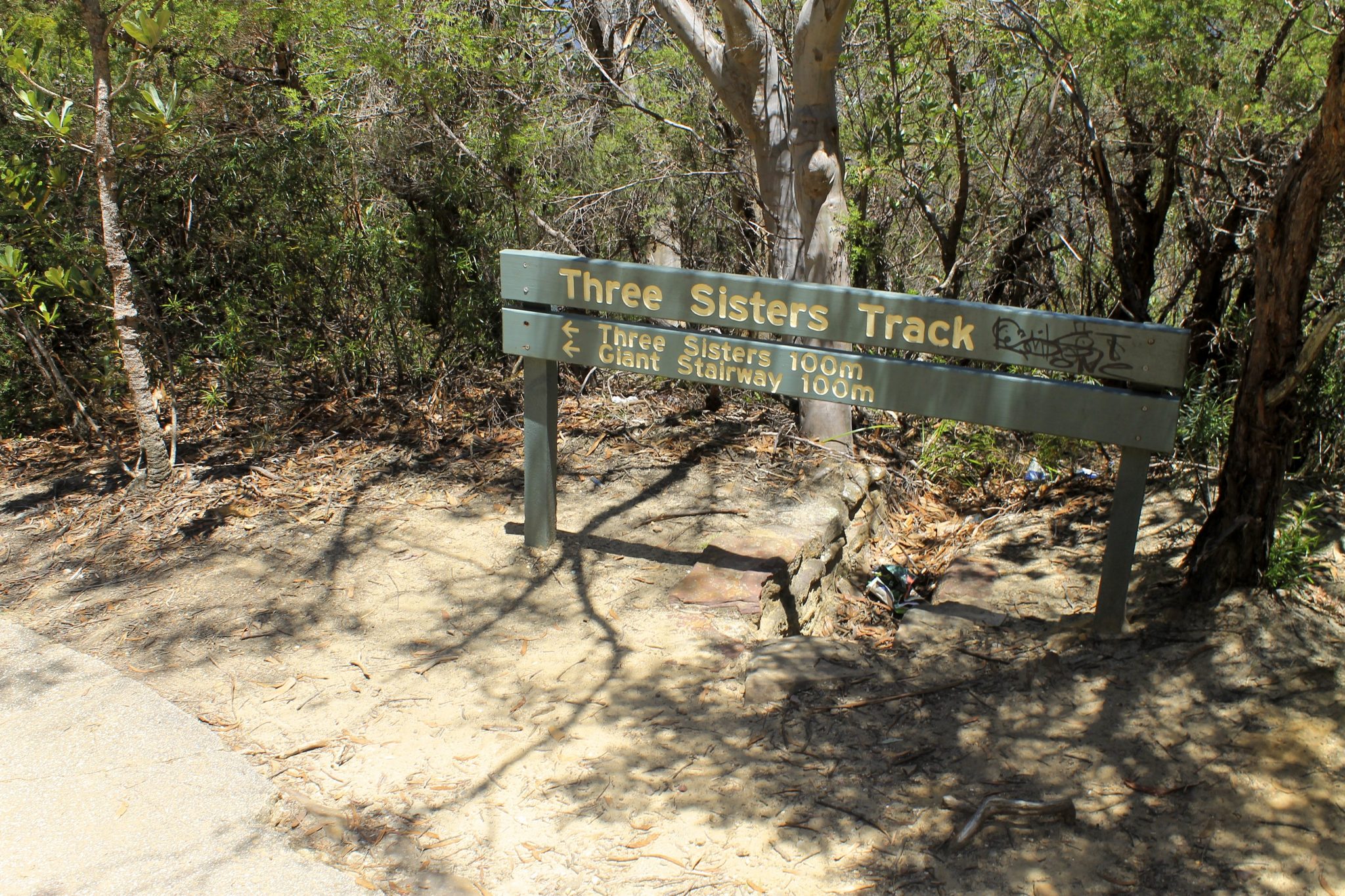 Literally there are hundreds of steps that go almost straight down into the canyon, a very strenuous hike if you’ve been drinking craft beer and indulging in a Tim Tams heavy diet. The way back up was even more fun, but at least my calves probably grew by about an inch that day.

Once I had finished my detour to the Three Sisters, I found myself on the main trail again, on the other side of the Prince Henry Cliff Walk. I managed to bushwalk all the way to the next town, Leura, and took a selfie in defiance at the Honeymoon Lookout spot. I think I scared a few couples away.

Related: Stepping Back in Time at Cockatoo Island 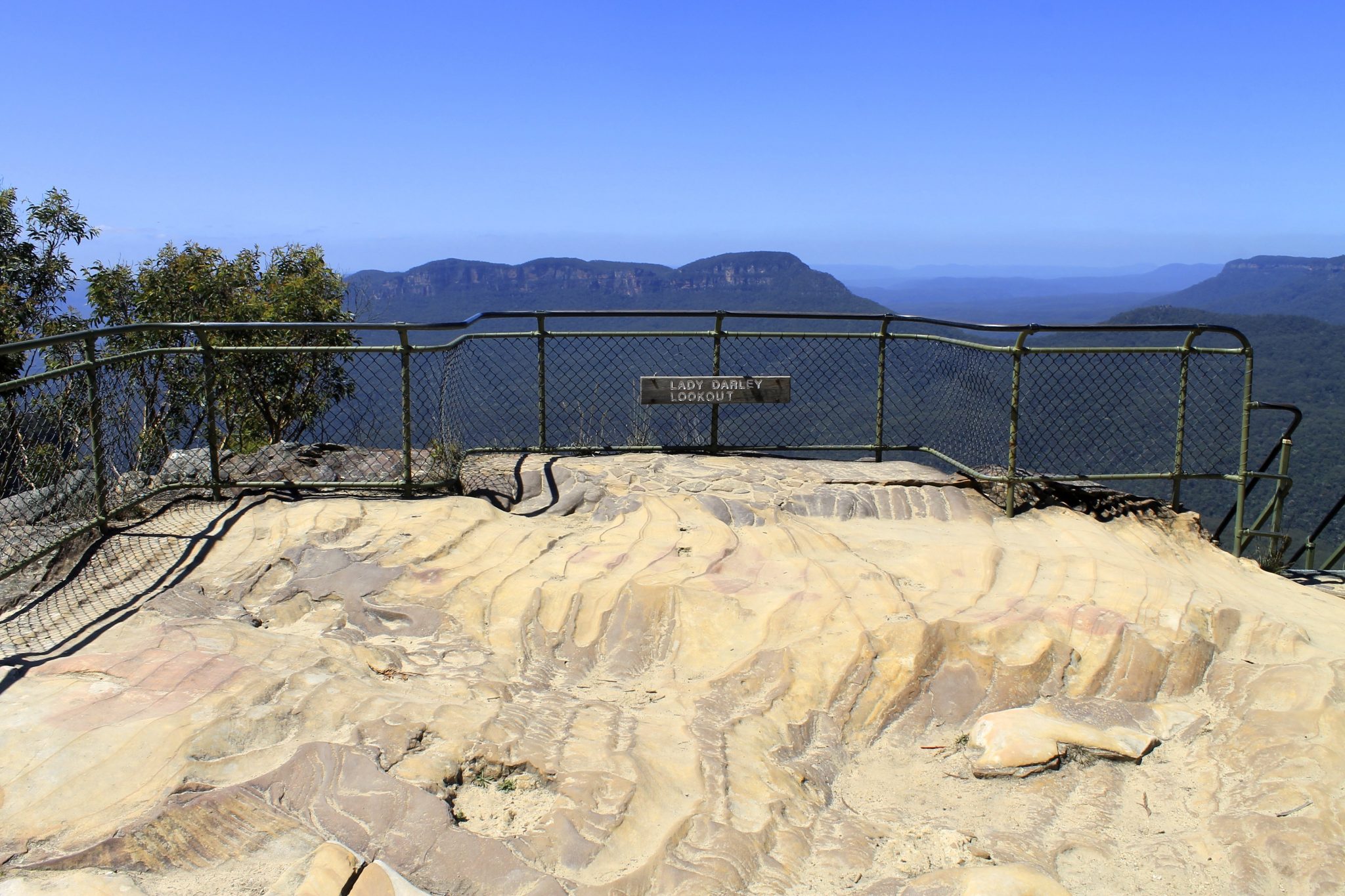 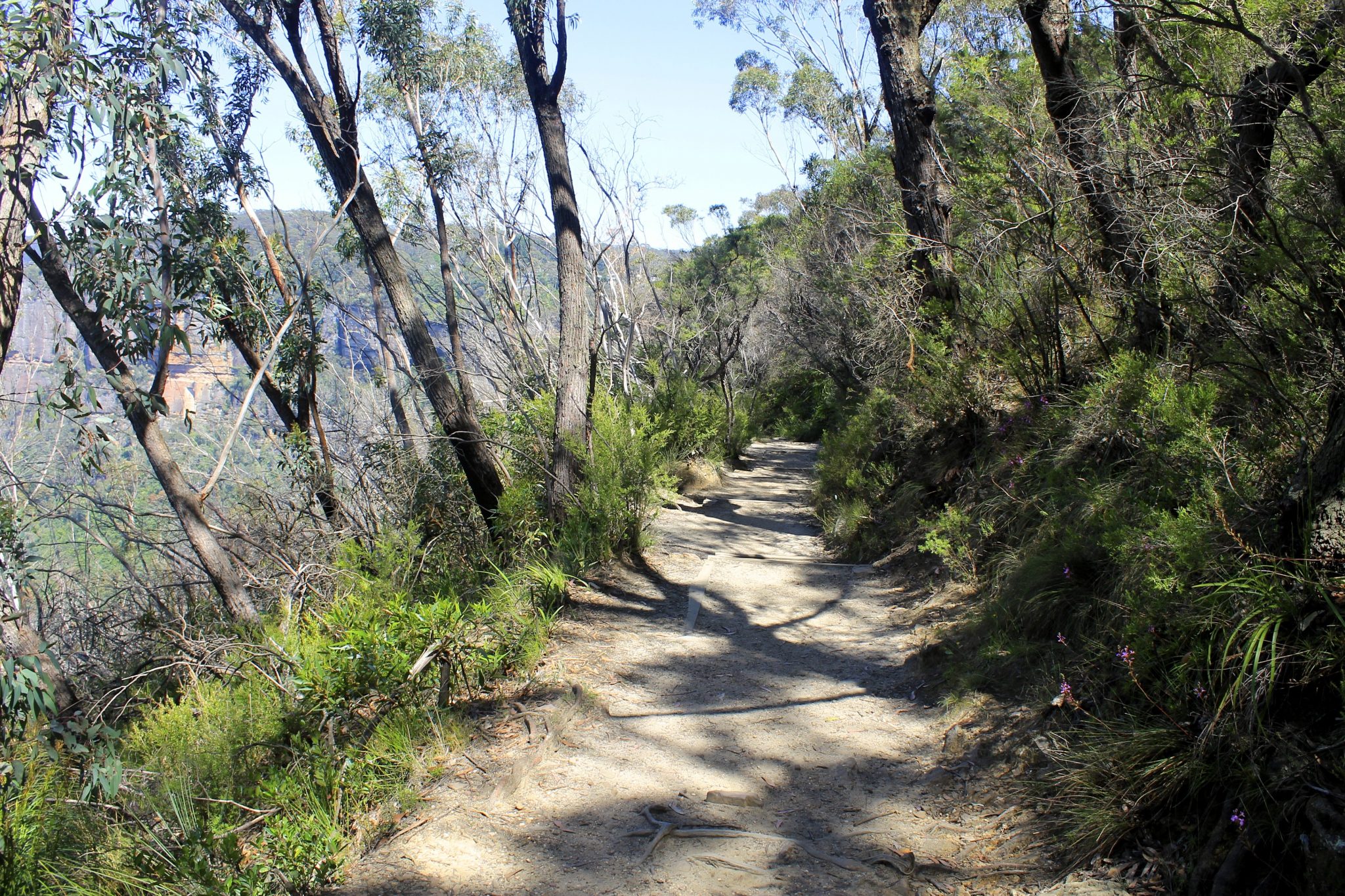 I ended at the Leura Falls, and found my way back into town. I grabbed a delicious meat pie on my way to the station to further prove my Aussie status and celebrate a successful day hiking around a beautiful spot.

I’d definitely recommend the Blue Mountains as a day trip from Sydney, even if you only have a few days in the city, it’s a worthwhile detour, and a once in a lifetime experience to hike around Australian bushland that has so much Aboriginal history and natural beauty.

Have you ever been to the Blue Mountains? What are you favorite places in Australia?