An Afternoon at Niagara Falls, Ontario 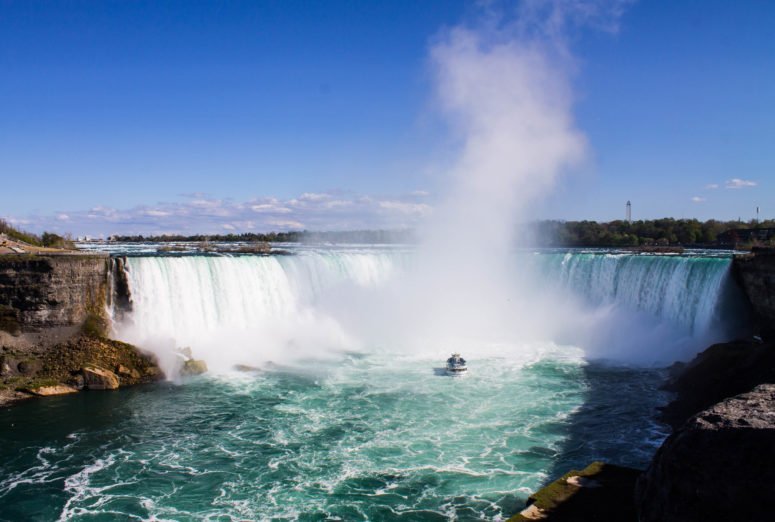 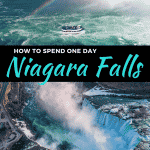 An afternoon in Niagara Falls can throw you into the present as soon as you lock eyes on its magnificence.

I decided to make a last minute stop into Canada again, my second in a month. This time it would be to the other side of the country, however, to Ontario where one of my best friends was moving into her new place in Toronto.

One of my other blogger friends, Lauren from Justin Plus Lauren, is also a Toronto resident and I wasted no time in asking if she was interested in a little reunion. She said she was and we settled on a day trip to the mighty Niagara Falls.

I’ve been trying to see more of my home continent since I arrived back to the States last March, after two years away. My time abroad made me realize just how little of my own huge continent I had yet to see.

As I’m writing this, I’m back in Canada for the third time in the last 3 months, and I plan to go back for a fourth time when I fly out of Vancouver on my move to Asia in October. I’ve just spent the past 3 weeks touring the northwest corner of the States, from the Oregon coast to North Dakota. You could say I’m taking my explorations seriously before I leave again.

I always wanted to see Niagara Falls since I was a young. It’s one of those North American sights you hear about constantly and hope to see for yourself one day. It’s also one of the best stops to make on a Canadian road trip.

If you follow me on Instagram, you may have noticed that I have a thing for waterfalls, and Niagara Falls is the most famous of them all in North America. 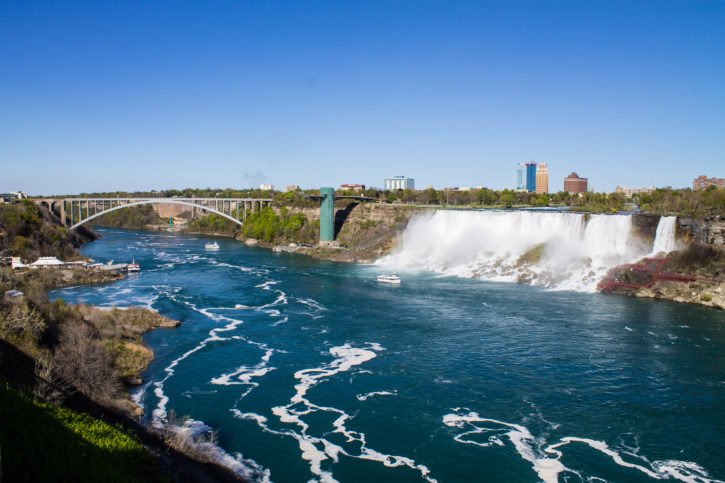 The 12,000 year old falls originated from the Ice Age. The huge ice sheets that used to cover this part of America and Canada sculpted out the large basins that would become the Great Lakes. As ice melted, these basins filled to the brim with water, and Niagara Falls developed through various geological movements throughout thousands of years.

Today, over 12 million tourists visit Niagara Falls every year and it is touted as the “Honeymoon Capital” of the world (a la Jim and Pam’s Wedding episode on The Office!). When we first arrived to the small town of Niagara Falls, Ontario I could tell just how much tourism has touched the local feel of the place for decades. It almost felt like a mini version of Vegas. There was neon everywhere, wax museums, attractions for kids and adults alike, and plenty of resorts and casinos to make you feel lost upon entry. 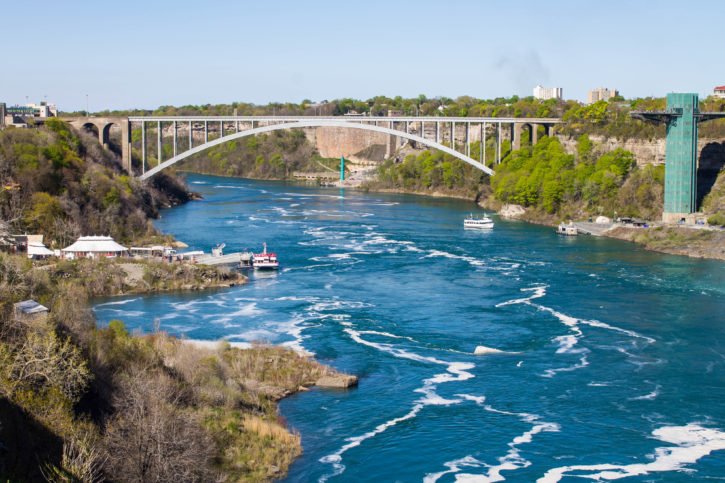 I’ve heard the tourism is not as built up in Niagara Falls, New York, but that could be due to the sheer omnipotence that the Canadian Horseshoe Falls have over the American ones. Yes, that’s right! There is more than just one Niagara Falls, there are actually two that straddle the border between the separate countries. The Horseshoe Falls is the most picturesque and photographed, with it’s inverted U-shaped magnificence. That is the one on the Ontario side.

The American Falls were still impressive to see, but lacked that magical quality that drew so many people to the Horseshoe Falls’ crashing welcome. 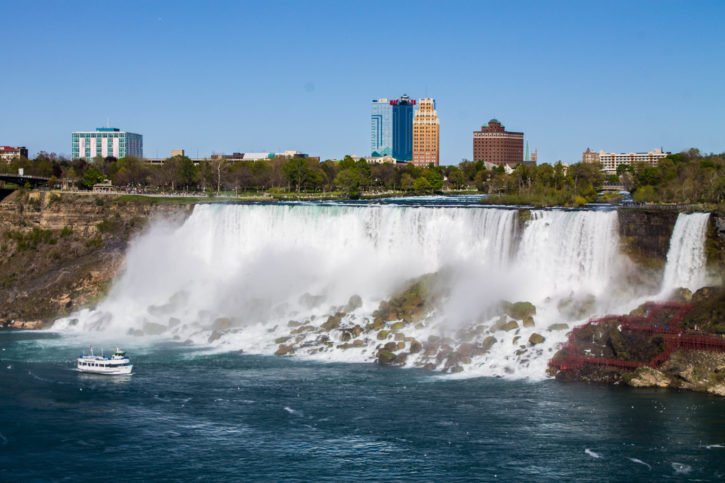 Six million cubic feet of water go over the falls every minute.

Another enticing aspect about the falls on the Canadian side is the fact that you can walk up to the very edge of the water toppling over the brink. Standing above water flowing 70 mph over the edge was something I’d never experienced before. You couldn’t help but think how scary it would be to fly over that edge with the many rocks down below. Six million cubic feet of water go over the falls every minute. Just think about that for a second. That’s HUGE. 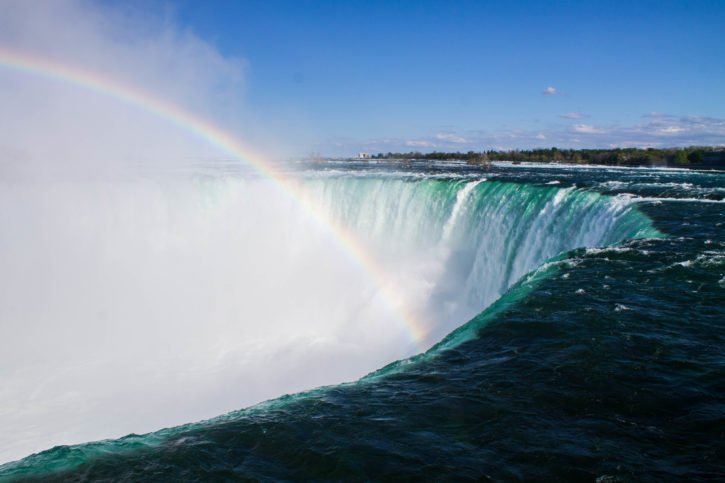 And plenty of people have gone over the edge of the falls for over a century, whether it was by accident, suicide, or as a daredevil act. The first person to successfully go over the falls was Annie Edison Taylor, who went over in a wooden barrel and survived in 1901.

Since she opened up the floodgates, there have been numerous other attempts to go over the falls and come out in one piece. Many failed miserably. There are a lot of bodies that were never found. One figure states that about 70 people have perished in the falls since 2003, another source claims it’s closer to 40 people per year. No one really knows for sure how many people have gone over to their demise.

There are some pretty miraculous survivors throughout the years as well; including a 7-year old boy who went over in just a life-jacket in 1960, and two other men in 2003 and 2009, respectively, who survived with nothing to protect themselves besides their every day clothes. With that said, judging from the amount of people who have gone over in past years, the chance of survival is very, very slim. 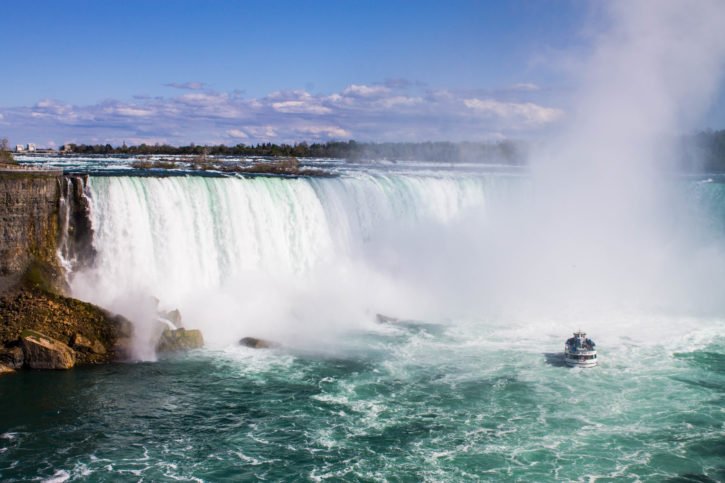 As I looked on from the furious water rushing past me at the edge, I glanced at the ethereal rainbow fading into the mist of the falls. We had come on a stunningly beautiful day in southern Ontario and it was hard to tear my eyes away from the deep blue water. I could feel the mist on my face and I could understand exactly the attraction that brought so many people to the falls. They were powerful, mesmerizing, and the most impressive waterfall I had seen in my life. 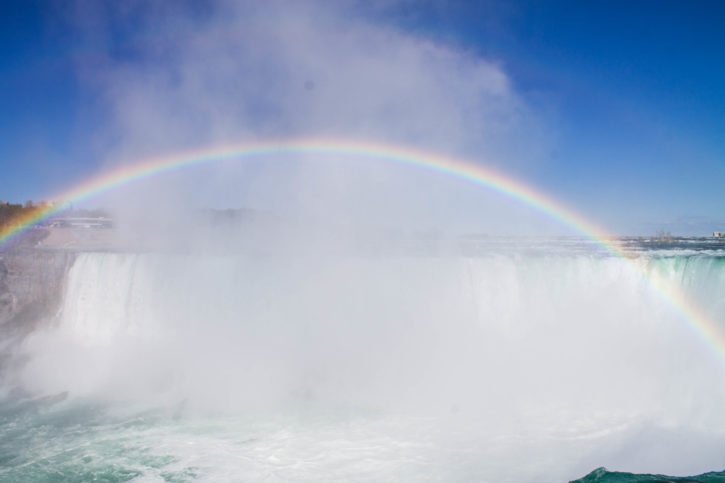 Standing at the edge only made me want to experience the mighty falls in another way before we headed back to Toronto for the night. We signed up for the reasonably priced Maid of the Mist boat tour and excitingly jumped on the next one that was boarding. 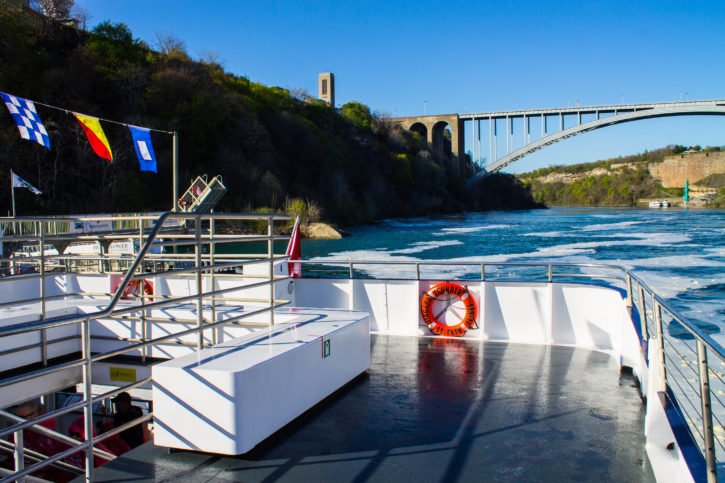 The first part of the tour went past the American Falls, and they looked much more impressive from a closer distance. Nothing could prepare us for going near the foot of the Horseshoe Falls though. As the boat turned toward the falls, the mist enveloped us and soaked us to the bone. We were laughing and taking pictures the whole time, it was freeing to be so close to something so naturally powerful. A force of nature to be reckoned with. 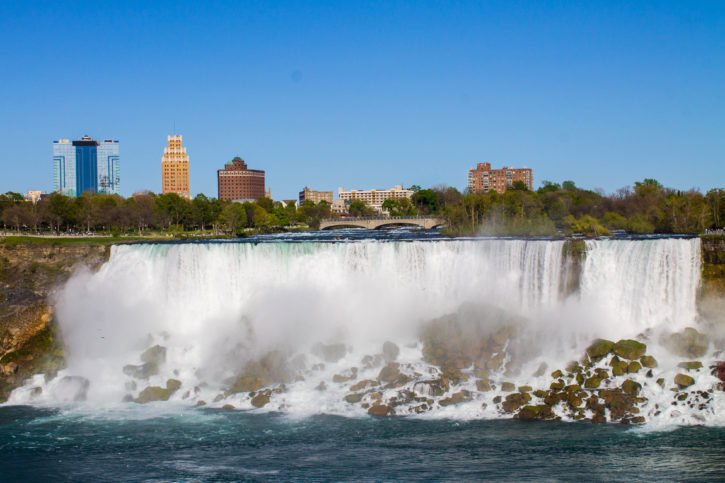 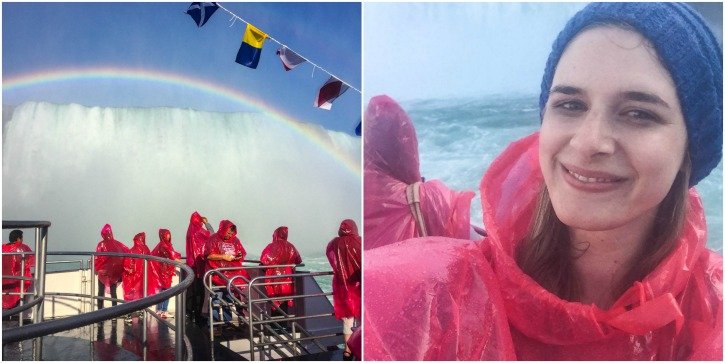 As we made our way back up and disposed of our brightly colored ponchos, that surprisingly did a great job of keeping our clothes dry, we made our way back up to the street. I took one last look at the falls on our way to check out the rest of the town, reluctant to leave such a special place. I worried I would forget what that feeling was like, standing underneath the falls and above them, but I can still recollect those exact moments whenever I think back. 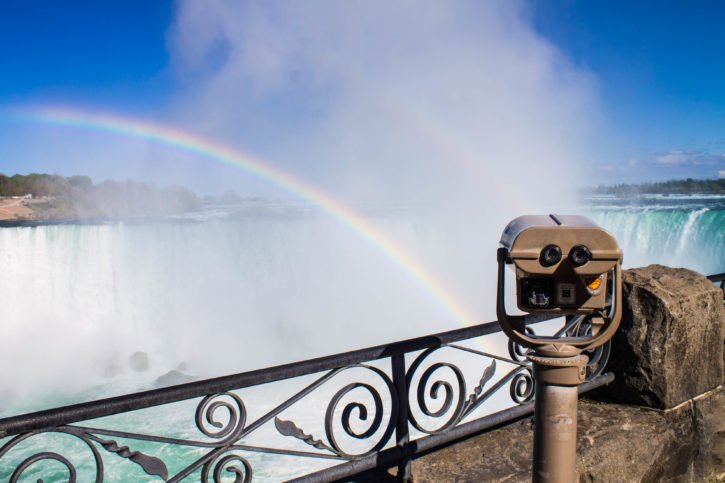 Niagara Falls is one of those places that sticks with you and reminds you of the beautiful fragility of life. It’s a place that reminds me why I travel, to witness a natural beauty so unbelievable that even when you’re standing right in front of it, you have to pinch yourself twice. It’s a place that makes you believe that a little beauty and the promise of rainbows may be exactly what we need today. 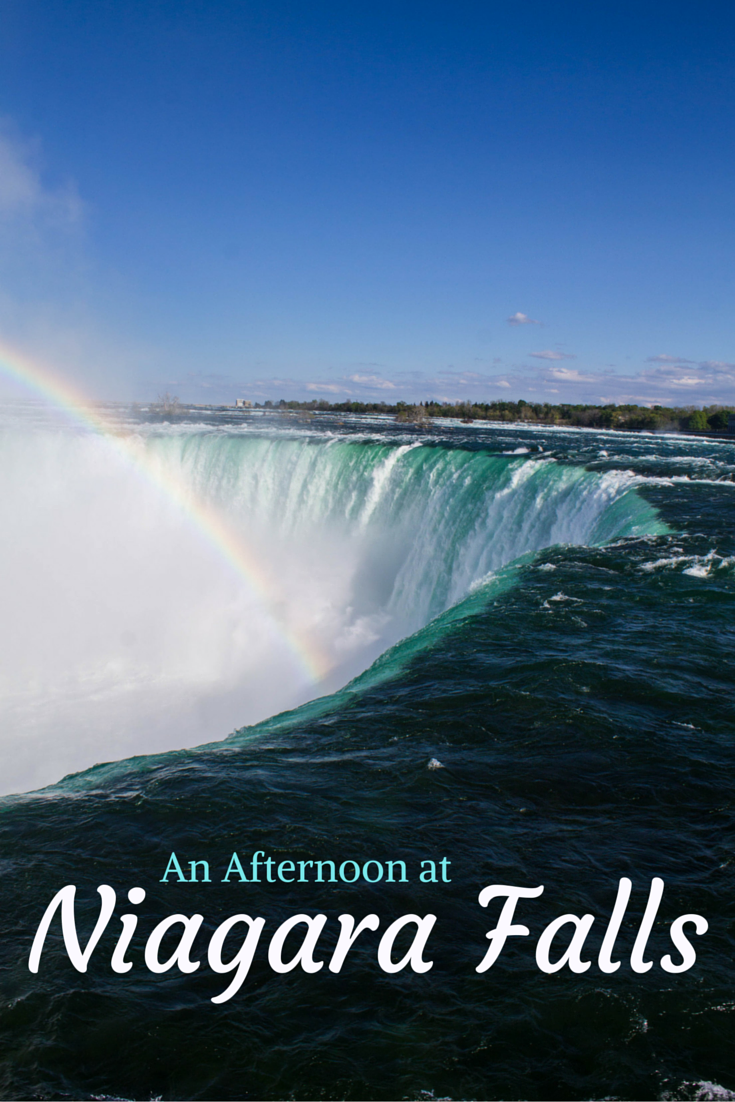