Dark tourism in Phnom Penh: The Killing Fields and the Genocide Museum 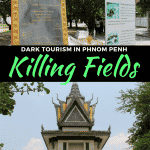 I’ve been to Birkenau and Auschwitz, I’ve visited the 9/11 Memorial, and now I’ve seen the Killing Fields and the Genocide Museum in Cambodia. What all of these have in common is a remembrance of historic atrocities that are incredibly sad to visit, but important to learn about and experience first hand to pay due respect to all of those who have lost their lives.

The Khmer Rouge was the ruling party in Cambodia from 1975 to 1979, led by a man named Pol Pot. In the span of those short 4 years of power, the Khmer Rouge party was responsible for the Cambodian genocide that killed almost 2 million people. The Khmer Rouge gained popularity in such a short amount of time, mainly because of the constant civil war going on at the time. In 1973, when the Khmer Republic government, with help from the US, dropped a million tons of bombs killing hundreds of thousands of Cambodians, many quickly gave their support to the Khmer Rouge, seeing them as a way out from the violence and loss.

Once they had complete power, the Khmer Rouge began their radical communist agenda of making Cambodia into a rural, classless society, avoiding capitalism at all costs. Everything about Cambodian culture changed, thousands of intellectuals, military officers, and soldiers were tortured and killed. Only when Vietnamese soldiers captured Phnom Penh in 1979, was the Khmer Rouge put to rest once and for all.

However, millions had already died by then at the hands of the regime in brutal and sadistic ways, millions of innocent lives were lost because of the deluded ideals of the party. Genocide, whether it be the Native Americans in the US, the Jews in Germany, or the Tutsis in Rwanda, has sadly been a repetitive part of our violent history. Cambodia is no different.

I knew it would be an intense and trying day as I made my way in a tuk tuk to Choeung Ek, or the “Killing Fields” on the outskirts of town. It was a very well done memorial to the people who had lost their lives at the compound, especially with the lack of buildings that still exist, most of them having been destroyed after the fall of the Khmer Rouge regime. I received my own audio set, and took my time going through all the spots around the compound, listening to survivor stories, trying to put myself in the shoes of the people living in terror within this place – impossible of course, since no one can truly understand what these people went through and the brutality with which they were met. 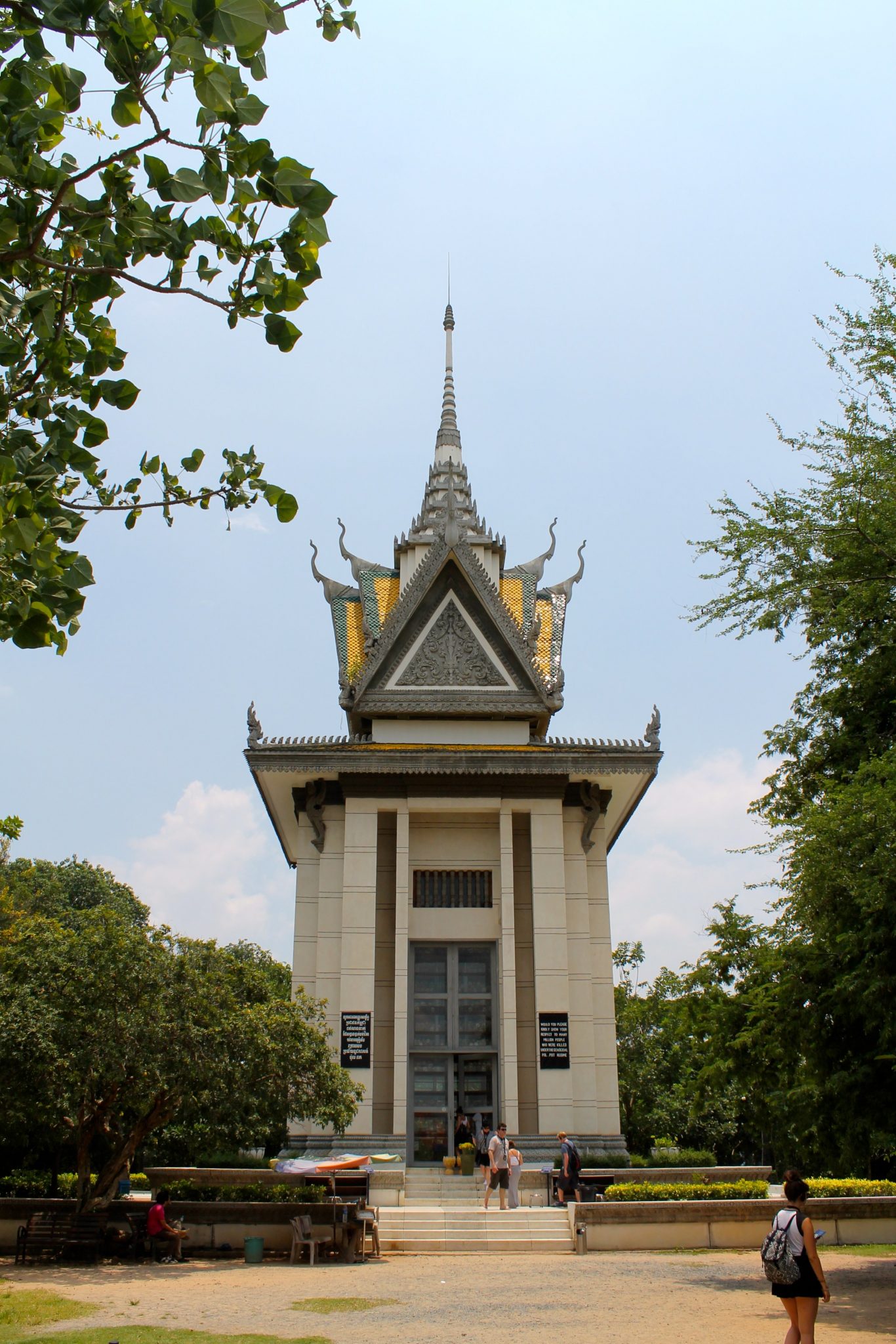 One aspect that struck me was the ruthless ways in which these people were murdered in droves. Every genocide is horrible in its own way, but these people were murdered on a more personal level by those in power: beaten to death with hoes and shovels, throats slit, babies hit against a tree until they died in front of their crying mothers. Bullets were too expensive for the regime, so they relied on barbaric ways of disposing of thousands upon thousands of people. There were still huge pits where mass graves had been dug, there was one where everyone in the pit had been beheaded and left to rot.

At the end of the tour, I came to a glass shrine I saw when I walked in. However, on closer inspection, I realized that the shrine held 8,000 human skulls. Taking a moment of silence, I walked around the inside of the shrine trying my best to commemorate all of those who had given their lives, it was overwhelming.

In the Killing Fields alone, 1.7 million Cambodians were killed, or 21% of the population.

Solemnly, I walked back to the tuk tuk, knowing the next stop was going to be just as difficult.

The Tuol Sleng Genocide Museum, also known as S-21, used to be a high school, before it was turned into a torture camp. Mainly it was used to imprison those thought to threaten the regime, they would torture prisoners until they gave false confessions, and then they would be sent to the Killing Fields to be disposed of. Similar to Auschwitz, a big part of the memorial is the walls of pictures of prisoners’ faces, of the many who died there. It gives you the ability to look each one in the eye and imagine what they had been thinking when their picture was taken at the camp. Some are defiant, some are scared, some ambivalent as if already resigned to their fate, each one had their own personality, their own story. 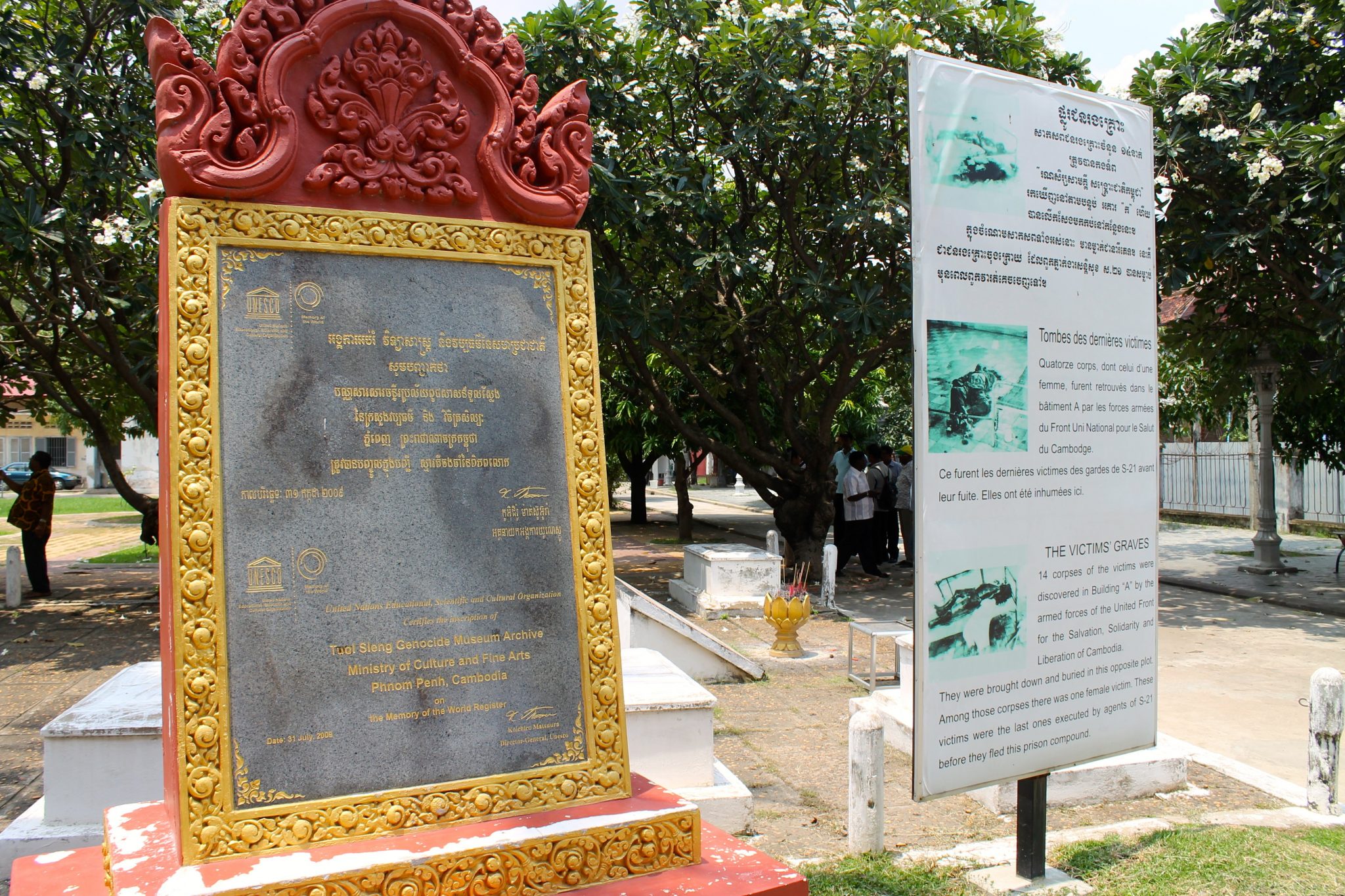 It was a heavy day in Phnom Penh, but what strikes me about the city and Cambodia as a country in general, is that even though having witnessed such atrocities in relatively recent years, Cambodians are still some of the friendliest and happiest people I have met in my travels. Phnom Penh is still a beautiful city, residual signs of the old regime are all but nonexistent except for the dark tourism museums. I can’t help but admire and respect the Cambodian people who have been through so much in not much more than a generation ago. 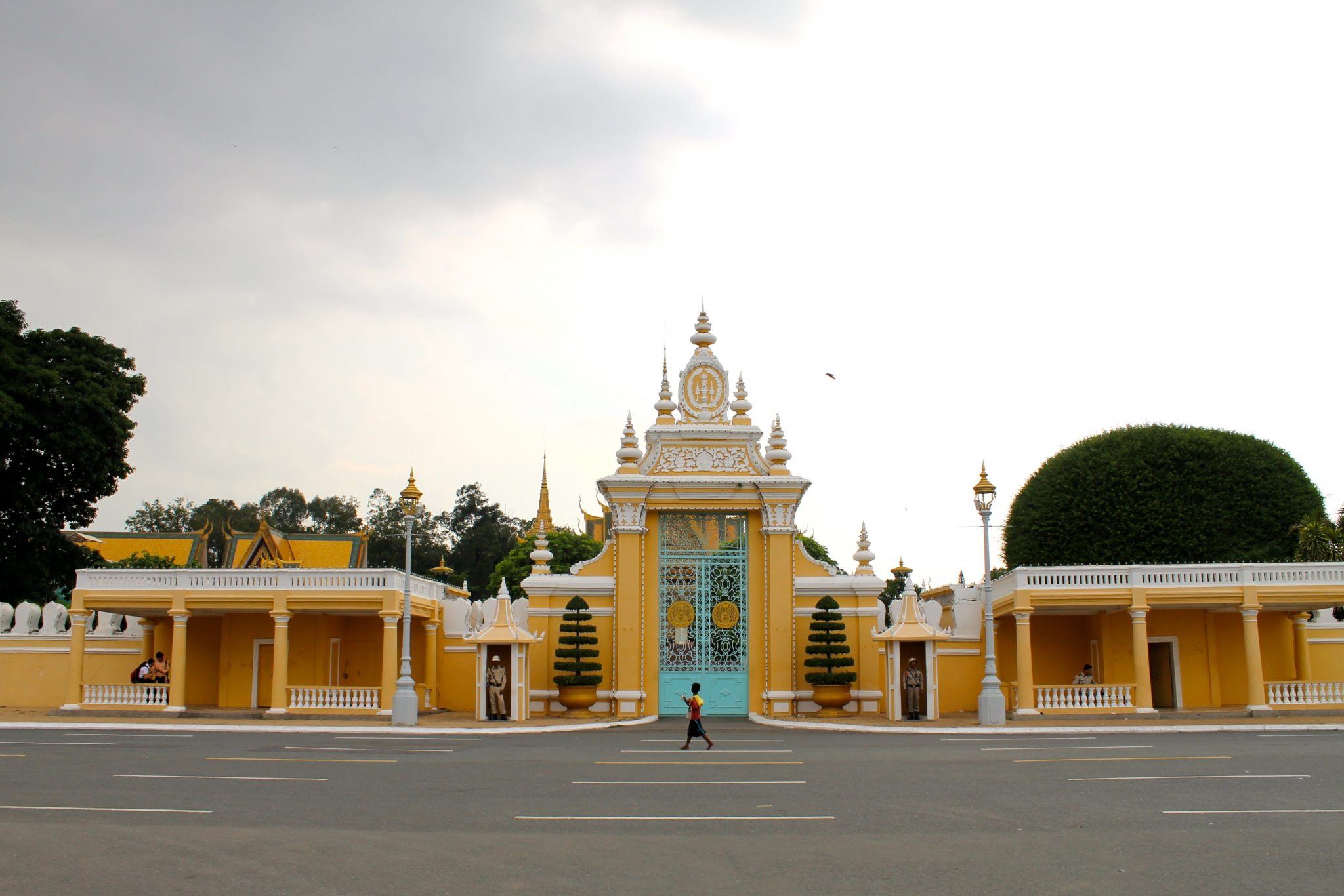 Although a sad experience to endure, I don’t regret for a minute paying my respects to the darker side of Cambodian history at the Killing Fields and the Genocide Museum, and I would recommend it to anyone who has some time in Phnom Penh. When we’re traveling or on holiday it’s easier to ignore such places, because you don’t necessarily want to think about the heavier parts of history that have happened there, but I think to really understand a culture, you have to experience all of it, the good and the bad.

And I think we’re all better travelers for it.