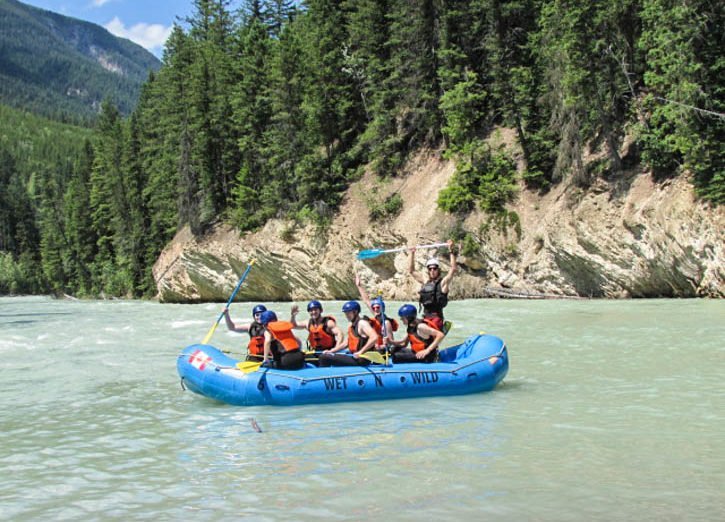 I’ve had a habit of facing my fears and getting (mostly) over them in the past decade. I’ve had a habit of getting out of my comfort zone and not allowing myself to think the worst until after I do something. The one fear that I can’t seem to kick, however, is the sheer terror I have of drowning.

For some reason, activities like scuba diving don’t faze me too much, perhaps because it’s so calm underneath the sea. But, if I’m doing something that’s more aggressive, such as surfing or being in the midst of waves I don’t know how to read, I have major panic attacks. I’ve dealt with intense anxiety my whole life and this fear of water has to be one of the strongest ways of spiking my anxious mind.

Even though I wasn’t very good at it, I tried surfing for the first time finally in Hawaii last year, after spending the majority of my life near the ocean. That was an important step forward for me but unfortunately didn’t lessen my fear any more.

I knew it was only a matter of time before I tried another activity like whitewater rafting to test that fear again. So, when we went to go visit my partner’s brother, who’s a whitewater rafting guide in Golden, BC at Wet N’ Wild, I wasn’t all that surprised when he asked if we wanted to go out on the water the next day. My partner, Kendall, was all kinds of enthusiasm, and I didn’t want to bow out. I knew I could do this, it’s all about mind over matter after all, right? 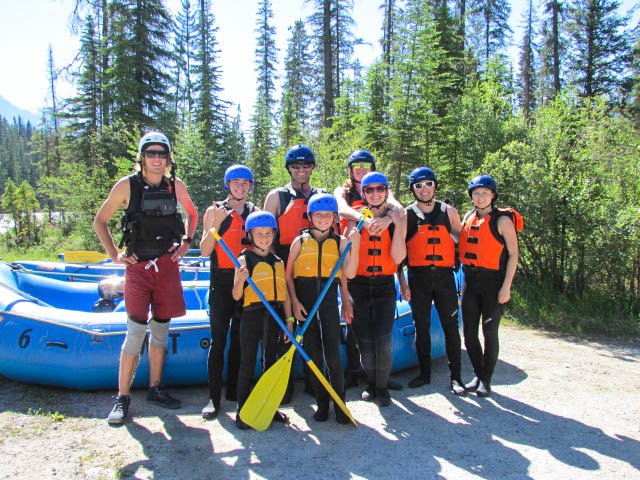 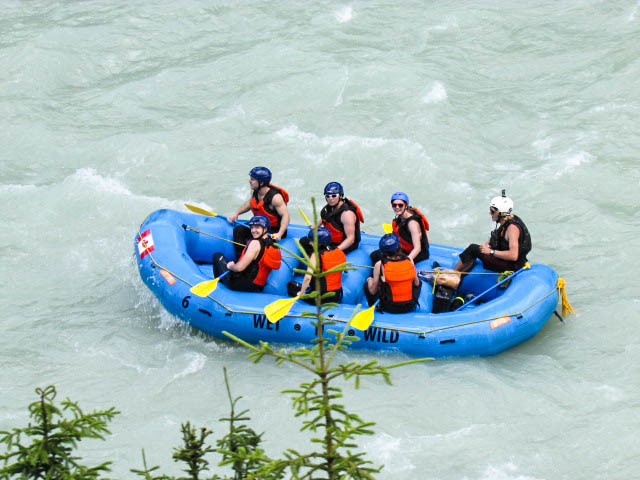 The next morning I couldn’t focus on my marketing work before the excursion. My stomach was in knots and I felt sick. My mind loves making my body feel uncomfortable and sick if it’s anxious. By the time we reached the Wet N’ Wild water rafting headquarters, I was trying my best to stave off the oncoming panic attack. I tried my best to smile and be overly friendly with people, and it started to ease my nerves more.

When we arrived to the starting point and hopped into the boat, I took a deep breath and thought whatever happens, happens. I’m going to enjoy this the best I can, probably almost pee my pants, and come out a stronger person for it. And that’s what I did. Not the pee my pants part, but everything else.

Luckily, I was told beforehand that Kendall’s brother had never flipped on this river before, which made me feel a little better. The first part of the trip started off easy enough and I began to notice my surroundings more. Our adventure took place on the Kicking Horse River in the Canadian Rockies in British Columbia. The milky green color of the river glittered in the brightness of the day. There were lush forests and sheer cliff edges around us. It was the most quintessential Canadian scenery I could’ve thought up in my daydreams. 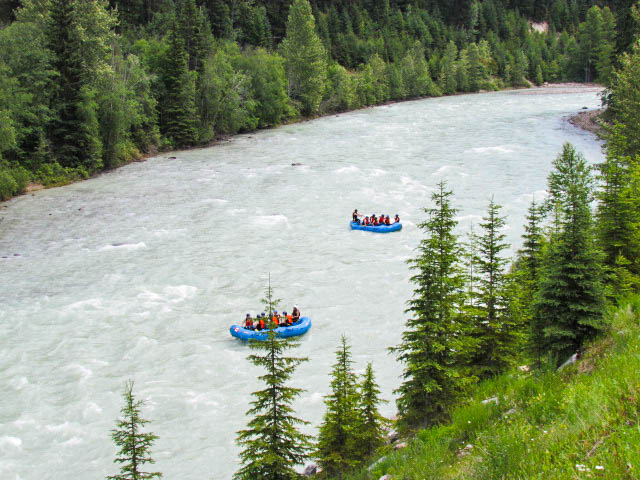 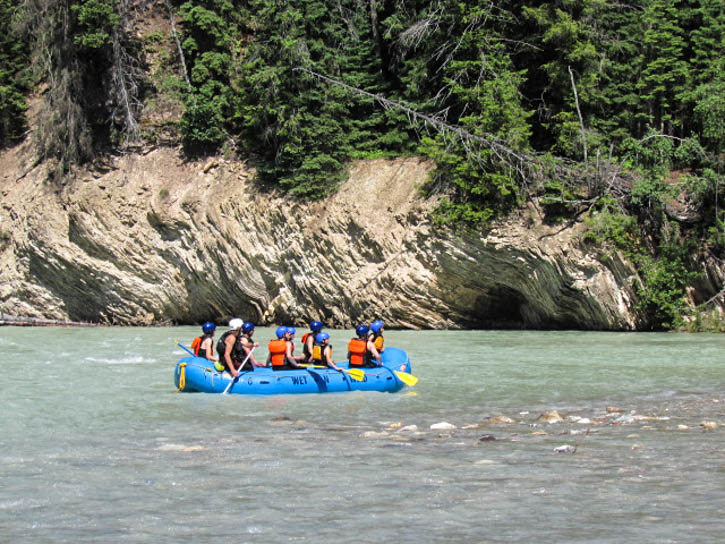 We were on one of the Wet N’ Wild rafting day trips called The Classic. From 10am to 3pm, you go through two different sections of the river, have a BBQ lunch between sections, and go from a calm river at the beginning to class 3 and 4 rapids by the end. The whole trip was 14 miles in distance and offered plenty of stunning scenery and thrills.

As we floated calmly down the first part of the river, our guide and Kendall’s brother, Zeb, came alive as our leader for the day. He talked about how some parts of the riverbed have washed away, local shenanigans, and was very clear with when we did and didn’t need to paddle. About halfway through the first section of the river, he pulled over to the side of the shore and had us hike up to a pretty little waterfall.

Right before we reached our lunch spot for the day, we hit our first legitimate rapid that soaked all of us. We had enough weight in the boat that the front end went down into the rapid and I thought for sure we were about to capsize. Somehow the boat floated back up through the waves and we made it to the other side, finally cooled off from the hot day.

I would consider our lunch more of a feast. You had your pick of hot dogs, hamburgers, pasta salad, green salad, fruit, dessert, cookies, snacks, and a variety of drinks. I couldn’t eat much because my stomach was still in knots, but I ate as much as I could for the next couple of hours ahead of us. I knew the next part was going to be the most difficult part of the day. 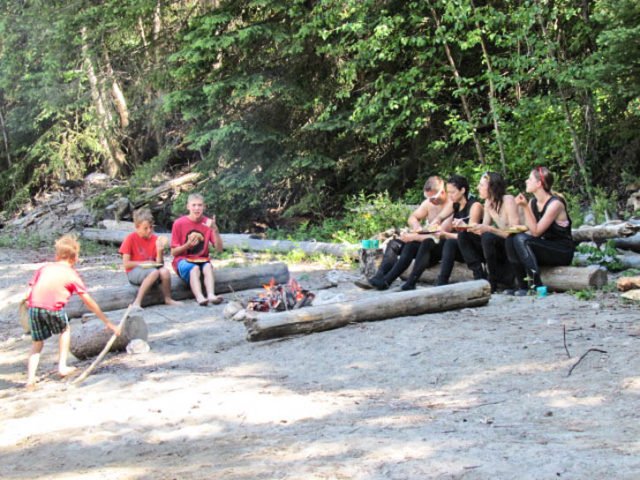 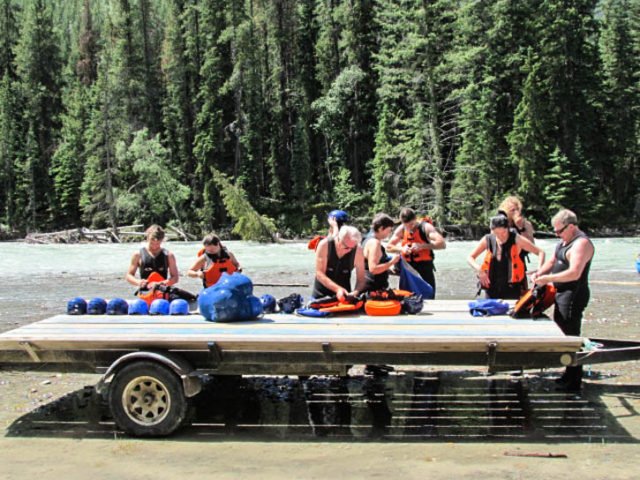 The hardest aspect to get used to with rafting is the fact that you have to sit up on the side of the boat, and paddle hard and steady straight into a rapid. My initial instinct of course was to sit as far down as I could in the boat and hide, but I swallowed my anxiety, sat on the edge with the swirling water below, and went for it.

Sometimes at the last minute, we would have to duck if it was a particularly strong rapid and just wait for the waves to pass through us. This was to prevent accidentally getting thrown off the raft and these types of waves soaked us to the bone.

Related: What to Wear Whitewater Rafting 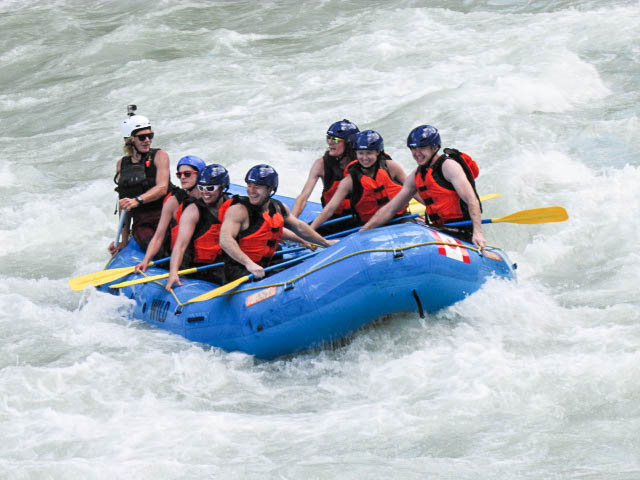 It helped having Zeb the Kiwi as our guide. New Zealanders in general have a wicked sense of humor, a no worries attitude, and see adrenaline-inducing activities as a walk in the park. Seriously, New Zealand has the adventure capital of the world (Queenstown), the skydiving capital of the world (Taupo), and it’s where bungy jumping was invented (just outside of Queenstown). There’s not much if anything that fazes Kiwis, always to my astonishment.

Zeb was a typical Kiwi in this sense. He was the perfectly calm and funny whitewater rafting guide that made the terrifying bits somehow fun and casual. He also had hilarious names for all the rapids, such as the G Spot rapid, sometimes you hit it sometimes you don’t (we did!). Other names included the Rollercoaster, Shotgun, and Last Chance, among others. 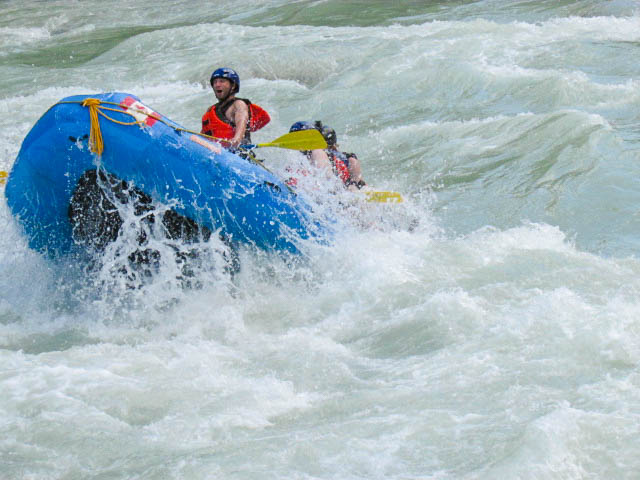 There were times that Zeb turned the boat parallel to the rapids to get one side wet, and then he would switch to the other side to make sure we were all thoroughly dripping wet by the end of the trip. It’s one thing to face a rapid head on, but another to tackle it sideways with you being the first one hit by the water. So incredibly alarming but exhilarating at the same time.

The second section of the river flew by mainly because I was trying to both paddle ferociously and stay in the boat. I’m happy to say we didn’t capsize, but there were a couple of times you really felt helpless in the throes of the rapids. Again, you just had to go with it and hope for the best. Maybe it was due to the build up and psyching myself out during the first part of the trip, but I actually enjoyed the more vigorous second part of the trip better. 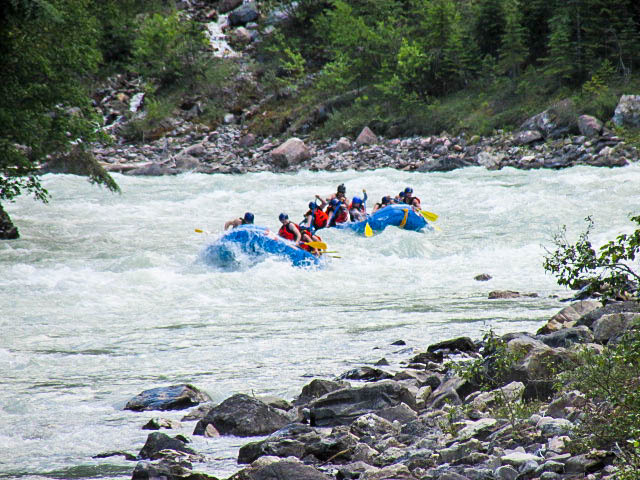 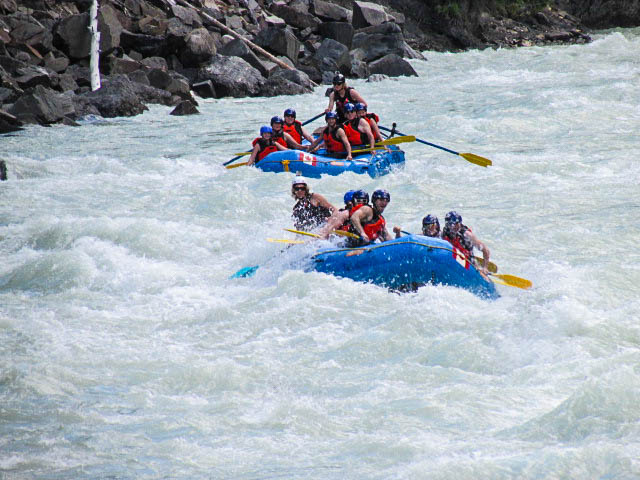 It was only at the end of the trip when we went through a shadier part of the canyon that we started shivering. For the most part, we were at a perfect temperature throughout the trip due to the hot weather, wetsuits, booties, and helmets. If it had been a colder day, we also had the option of wearing splash jackets, but we all chose to head into the water with our guns out.

As we washed up to shore I was all smiles. I not only survived my first whitewater rafting experience despite a lot of anxiety, I actually enjoyed it too. I found Wet N’ Wild to be a professional and friendly company, I never once felt like I wasn’t in good hands should anything happen out there on the water. 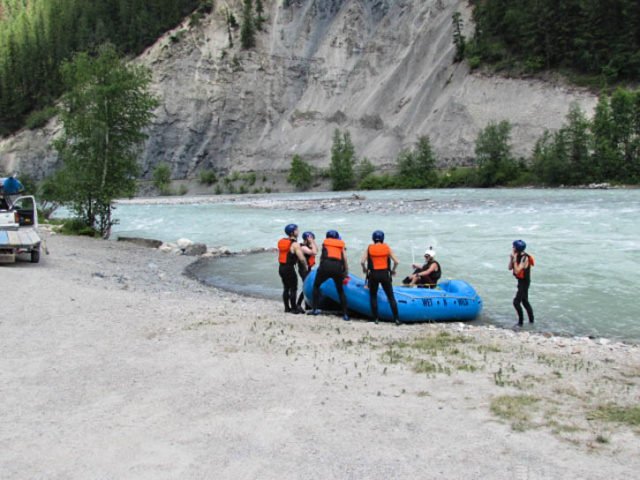 Once we arrived back to headquarters, there were warm showers for us and changing rooms to get out of our wetsuits. It was still a perfect day in Golden and the sun quickly warmed us up again. As we walked to the back to meet up with Zeb and the other guides, I let out a sigh of relief, still high on adrenaline. So, this is what living feels like.

Note: Zeb and Wet N’ Wild graciously hosted us for our tour, but all opinions are my own. All photos in this post were taken by and belong to Wet N’ Wild. If you want to go whitewater rafting but you’re slightly terrified like I was, my only advice would be to just do it! Seriously, if I can do it anyone can, and facing my fear was so worth the incredible experience. 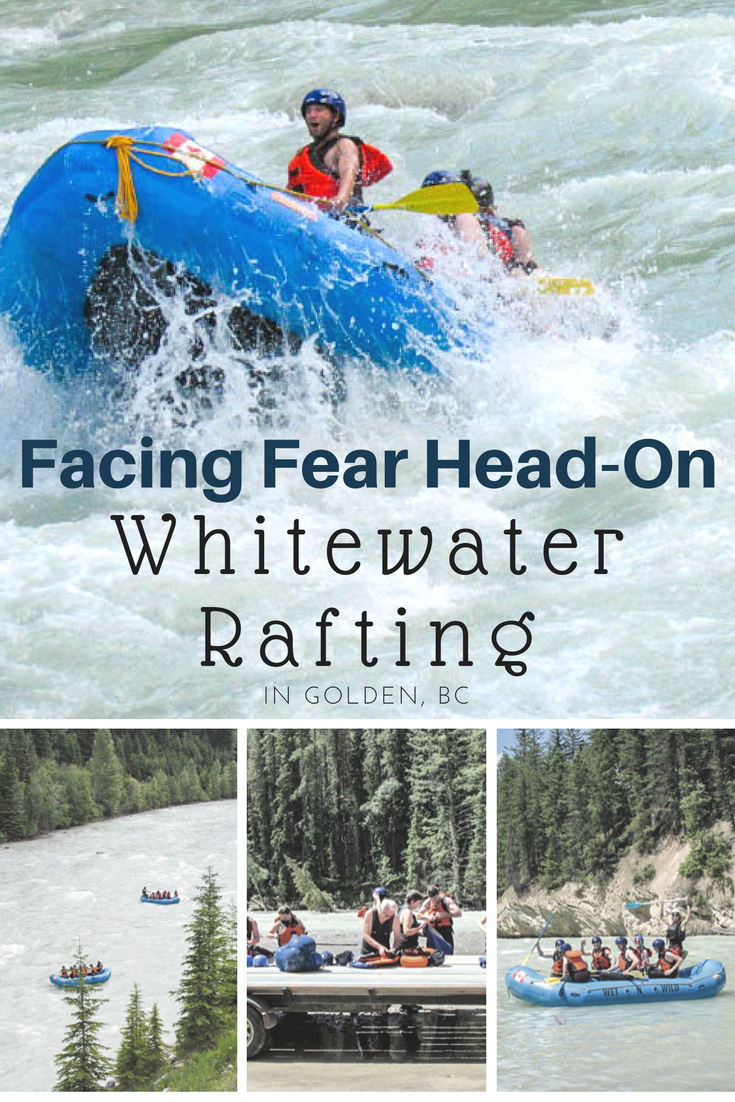 20 thoughts on “Facing Fear Head-On: Whitewater Rafting in Golden, BC”