My First Impressions of Hong Kong 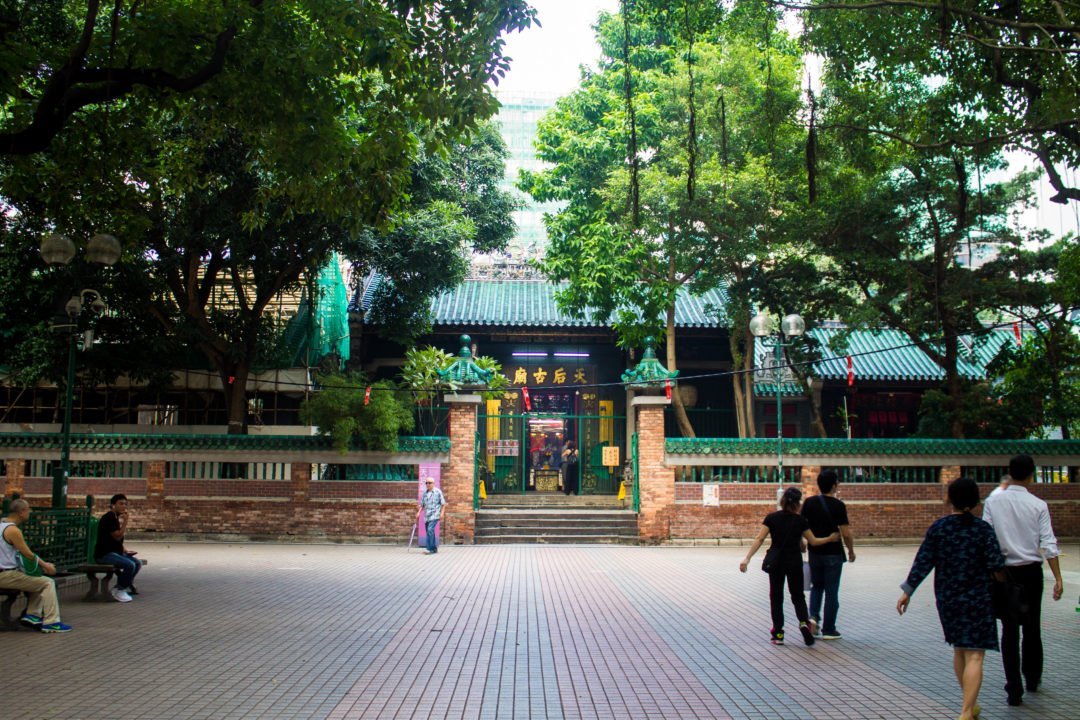 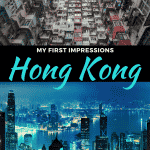 My first impressions of Hong Kong after 10 days – fast-paced, smoggy, and welcoming.

The buses barreled past at an alarming rate, not giving me the usual berth I would find in North America. The smells that wafted up from the grates and alleyways made me equally intrigued and wary. The electricity that I felt every time I stepped out into the humid air was unforgettable.

These were my first impressions of Hong Kong.

The smog made us both sick within a few days, we were unable to get out of bed with our pounding heads, coughs, and other ailments that crept up on us. We bounced back soon enough and Hong Kong grew on us in a way that makes you reminisce about a new travel friend who was exciting and a bit of a mystery.

The buses were clean and efficient. The metro station was almost always packed, but people were hardly pushy unless you were unlucky enough to experience an MTR station at rush hour.

I thoroughly enjoyed my time in Hong Kong. It was the perfect place to get my feet wet for the start of my year-long journey in Asia.

For some reason, I thought Hong Kong was going to be a lot more westernized than it actually was. It’s much nicer to have that surprise than to find a westernized place that you thought would be more local, so I wasn’t complaining. 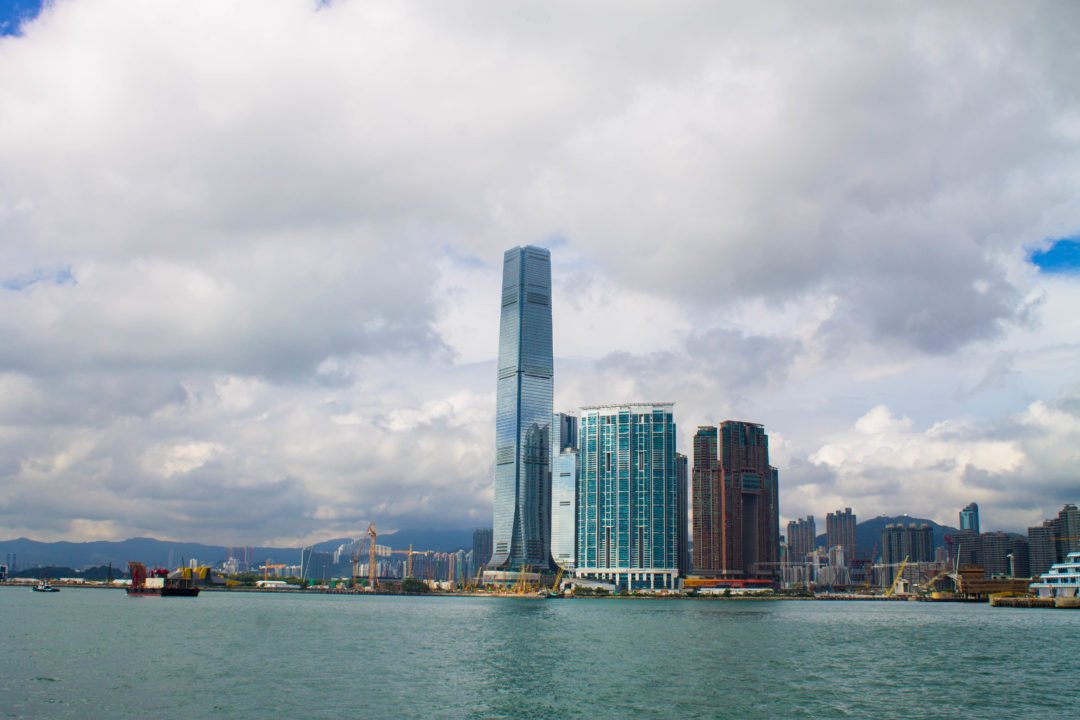 And to be fair, I may have had a less westernized experience, because I spent most of my time in Kowloon, across the harbor from the more built up Hong Kong Island. Kowloon is seen as the more traditional side of Hong Kong where more locals live.

English was not widely spoken, so I tried to keep up with the main Hong Kong language, Cantonese, that flew back at me. Hong Kong traditional food was another surprise all together.

What is Hong Kong known for? It’s food. Everyone always raves about the food in Hong Kong. Some people say that they travel to Hong Kong just for the food.

Unfortunately, I just never clicked with the food in the city, there weren’t many meals that I drooled over. I’d like to think that this was just bad luck in where I chose to ate. I’m not sure. 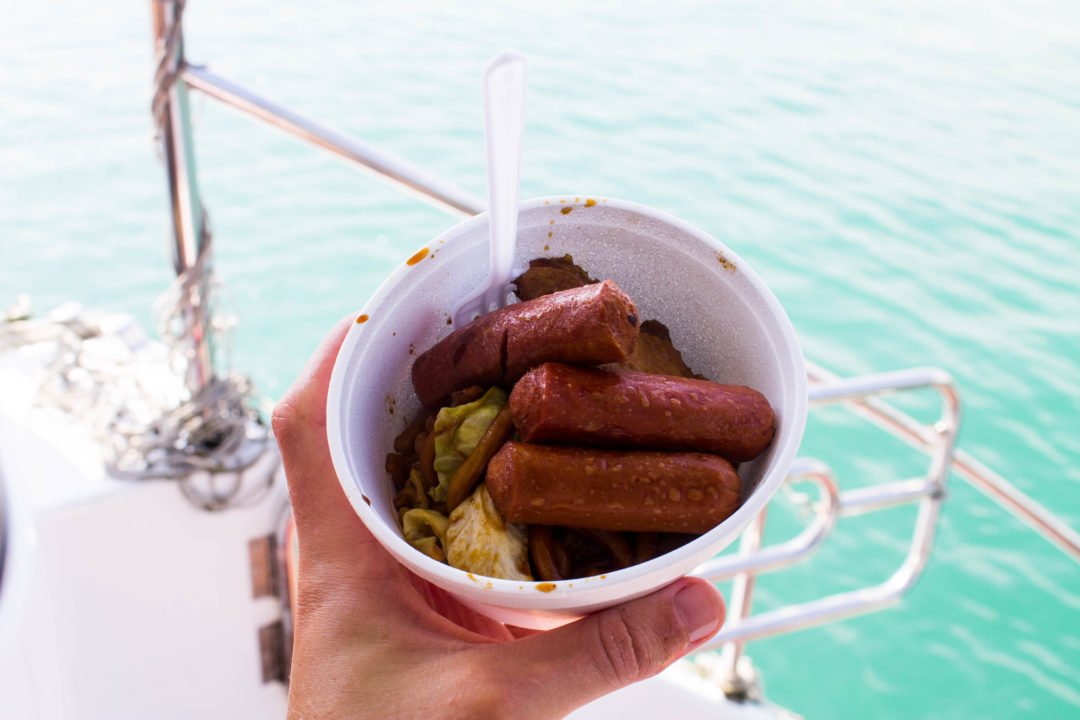 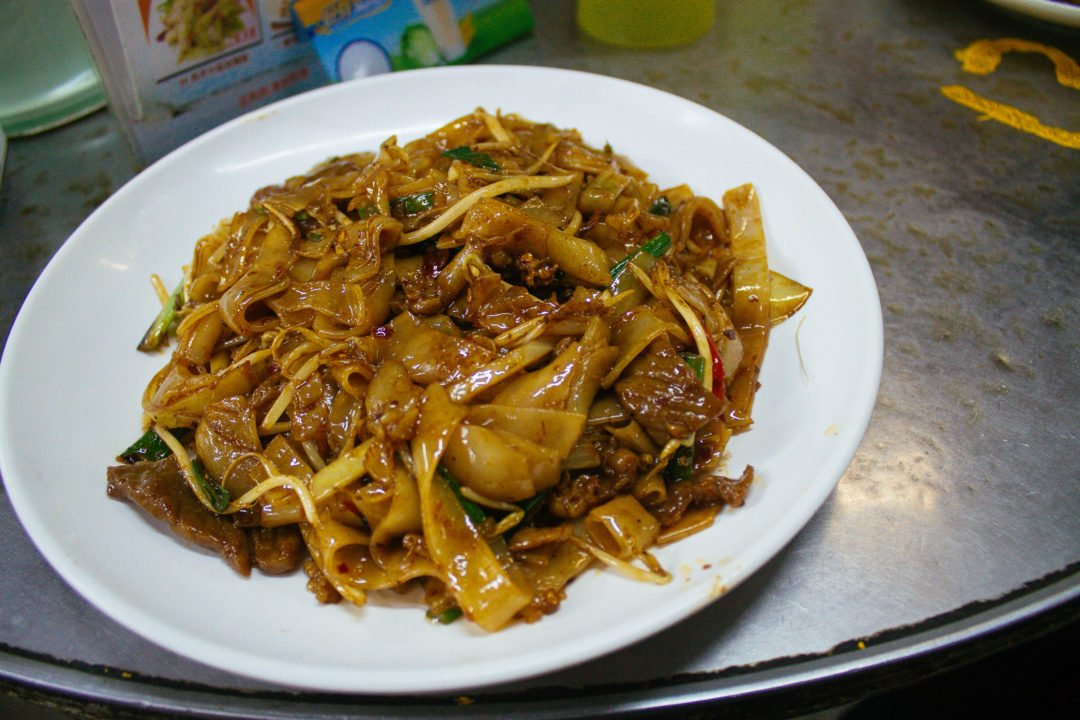 The Hong Kong traditional food, mainly from Kowloon, was hearty and practical. For the first four days, we couldn’t order anything without getting some sort of fish broth or seafood involved. When I would order something like beef noodles, it was made with potent fish broth that took over the flavors of the whole dish.

Most of the time I wouldn’t know what I ordered since everything was in Chinese, which was all part of the Hong Kong culture experience. It was like a Russian Roulette of food, “what will be placed in front of me today?”

Food aside, I couldn’t believe how friendly people were in such a big city. It reminded me of the friendliness from strangers that you often find in New York City. The Cantonese people are lovely humans and make living in a huge city not bad at all. For the most part, people were genuinely helpful and kind. 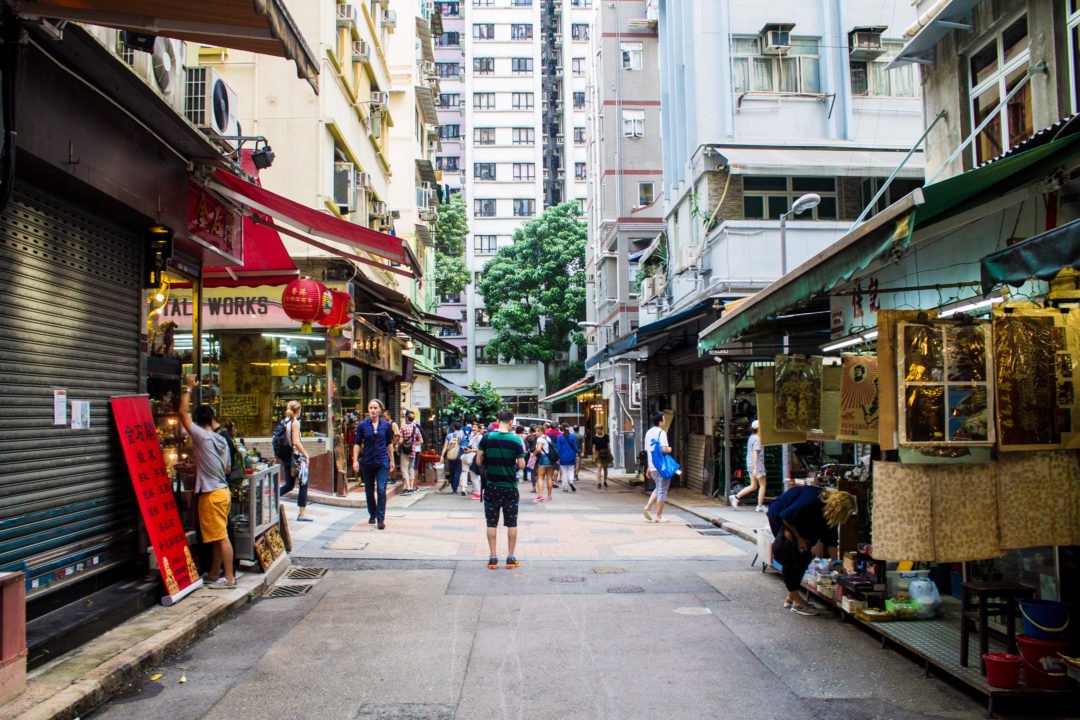 One example of this was when we were waiting at a bus stop one day. We were meeting up with friends at a pier that was a good distance outside the city for our first junk boat ride, and we were on a time limit.

The minibus we were meant to take approached our stop, but it kept driving past as we waved our hands since it was full.

The kind local man next to us started gesturing and pointing to our phone that still had Google Maps up with our destination. He called a taxi and told us to get in with him. We looked at each other and tried to explain that we wanted to take the bus, but he was adamant about us joining him.

20 minutes later when we got out of the taxi, he jumped out and started walking away. He had paid the whole fare and when we chased after him to pay him back, he shook his head and gestured he didn’t want our money.

He just wanted to help out two tourists who looked lost. He dipped his head as a goodbye and quickly walked away.

These are the kind of encounters I found on a regular basis in Hong Kong.

I knew the budget accommodation options were not going to be amazing. I’d heard stories of the budget guesthouses that would never pass health & safety standards back home. One of the many interesting facts about Hong Kong that we discovered is that a lot of budget rooms don’t have windows either, which was interesting to get used to since I’m used to waking up with natural light.

When we first arrived to the city, we were staying in a nicely run and clean hostel off the beaten track in Kowloon.

We left when the level 8 super typhoon was going to reach its peak within an hour. We had no choice, however. The closest budget accommodation we found was a half an hour walk. The sooner we found a place to stay for the night the better, and it was already past noon.

The accommodation we were hoping to stay at wanted to make sure that we could make it, so they wouldn’t let us book over the phone. It is one of the Hong Kong traditions, to shut down all of the transportation in the city (it’s the law once a typhoon gets to a level 7 and over), so all we had left was our own two feet to get us there.

We took our chances and set out for on a 30-minute adventure that led us to the heart of Mong Kok. We walked against the strong wind with our big packs, getting soaked to the bone.

Mong Kok is the busiest district in the world according to the Guinness World Records, but you couldn’t tell it from that day. We were two of the only people out and about. It’s probably the closest Hong Kong has been to feeling like a ghost town.

Long story short, we made it in one piece and they had a room for the next few nights available. We went out for food close by later that night, and by morning the whistle of the typhoon was only a whisper. We had survived our first tropical cyclone in Asia.

Looking back, Mong Kok ended up being my favorite area of Hong Kong. This is where the vibrancy of the city and local culture really came alive.

We were in Mong Kok for a few nights, one of those being a Sunday, and I was impressed by the dazzling Sunday markets selling everything from baby clothes to fish balls. 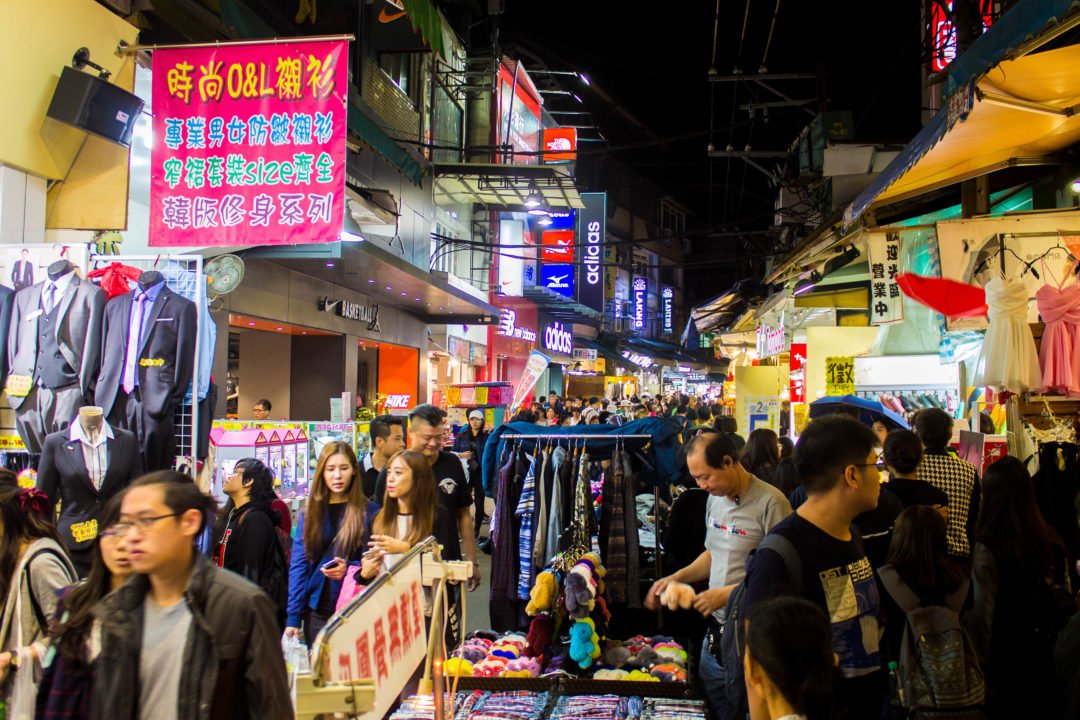 Toward the end of our stay in Hong Kong, we journeyed down to the central location of Tsim Sam Tsui to find the cheapest accommodation in Hong Kong – the Mirador and Chungking Mansions.

We found a spot at Mirador Mansion and we even had a window in our room. Although it was nice on our budget, I don’t think it’s a place I would necessarily recommend or stay at again. 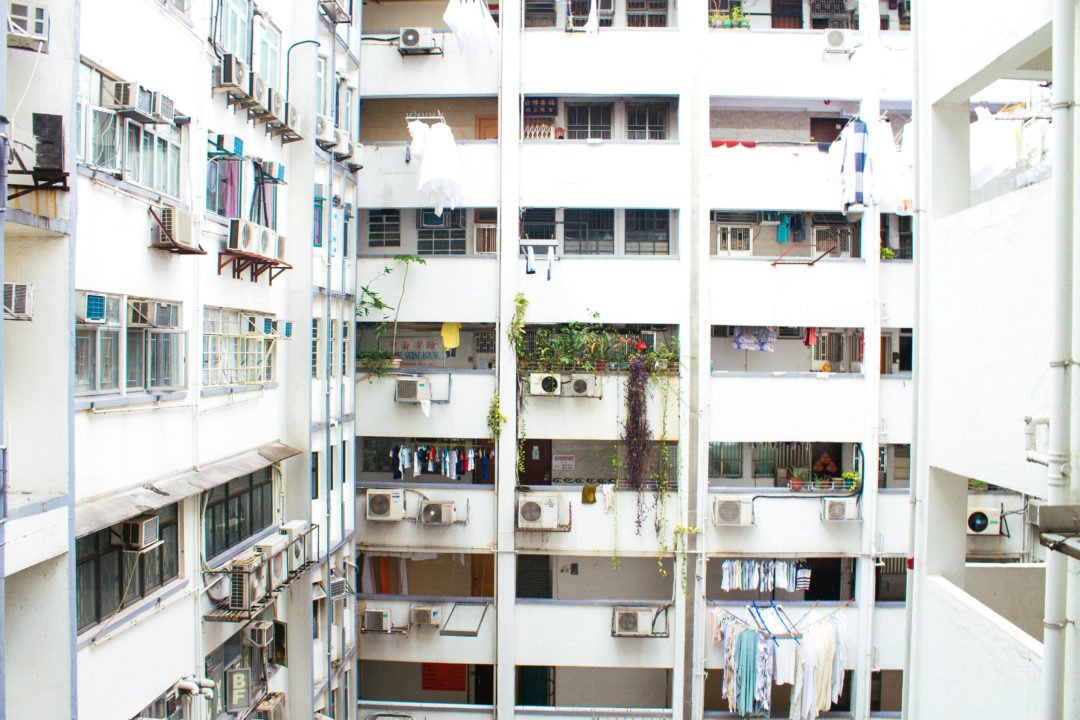 We heard stories from locals about the murders and disappearances that go on inside the walls of the mansions. Every time we waited in the long line for the elevator, I thought for sure we were going to make it break down with the amount of people that tried to fit into each lift.

From doing more research on these mansions, it seems like they have been cleaned up in the past few years and there’s not as much sketchy activity anymore. Still, it wasn’t my favorite accommodation in the city.

All in all, Hong Kong was a whirlwind 10 days. It was expensive, cultural, vibrant, and provided a lot of new experiences.

I’d love to know, have you been to Hong Kong? What’s your favorite Asian city?

What language is spoken in Hong Kong?

The main language is Cantonese, with about 96% of the population able to speak it. English and Mandarin are also common languages that can be heard in the territory.

What is the main Hong Kong religion?

While more religions have been popping up in Hong Kong over the past few years, the main Hong Kong religion is still Chinese traditional religion being a mixture of Buddhism, Taoism, and Confucianism.

What is Hong Kong known for?

Hong Kong is known as the city of skyscrapers. It has more than four times as many skyscrapers as New York City, so you can bet there are plenty of gorgeous Hong Kong rooftop views around the city.

NEED HELP PLANNING YOUR TRIP TO ASIA? FIND INSPIRATION FROM THESE BLOG POSTS!

38 Reasons Why Life in Taiwan is Better

The Cheapest Asian Destinations to Fly into this Summer

Festivals I Want to Experience in Asia 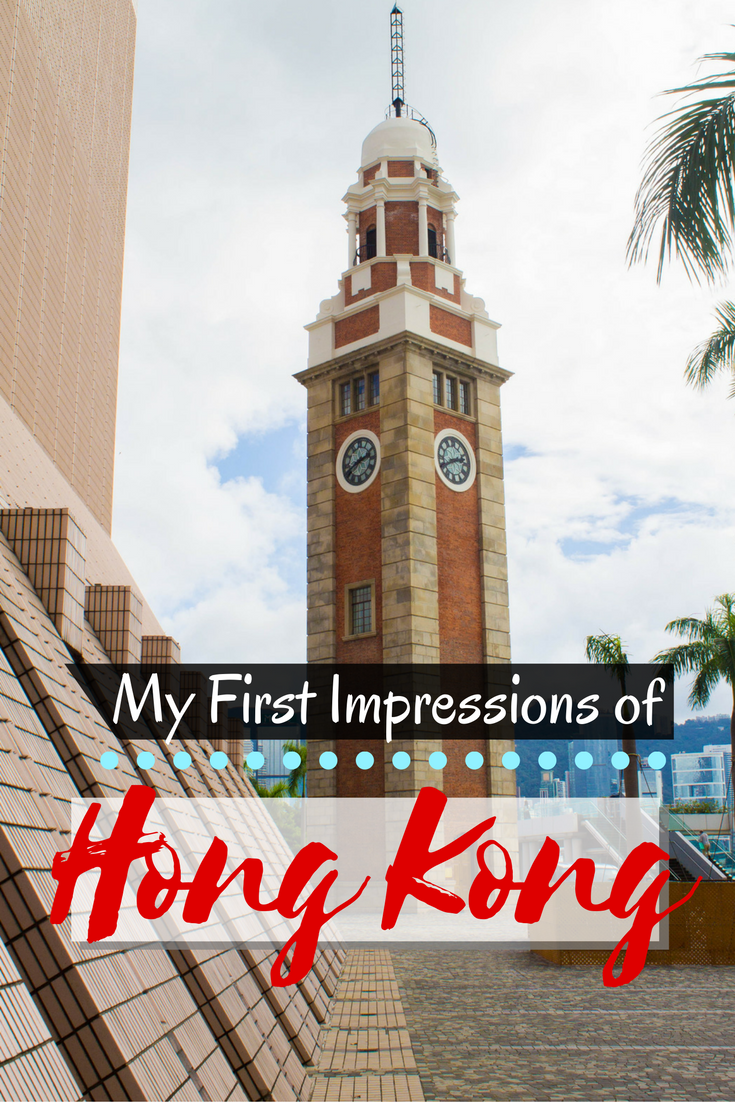