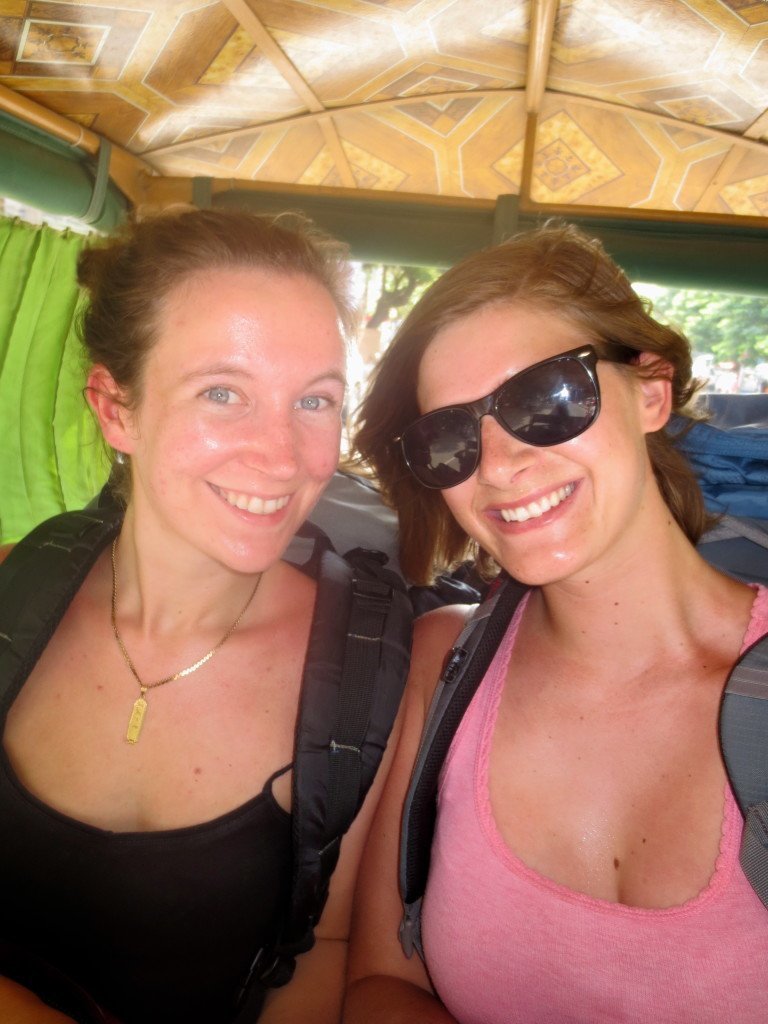 I have premonitions sometimes when it comes to relationships, people, places and things. It’s a different feeling than any I can describe, just that I know it’s bound to be something special, a feeling like we’ve met before, that I’m at home in a way. Perhaps it’s simply the ability to recognize a deep connection when I come across one.

I’ve only had a few of these in my life in terms of people, two of those turned out be the only two serious relationships I’ve had, my high school sweetheart I met at the age of 13, and my college boyfriend I met when I was 20.

It happens with places as well. The first time I stepped into the Tuscan atmosphere in Florence, I knew immediately how much I would fall in love with the city I would end up calling my second home.

Well, I’ve been in Cambodia less than 24 hrs and I’ve only seen Phnom Penh, but I can tell you already that I feel something special for this country. 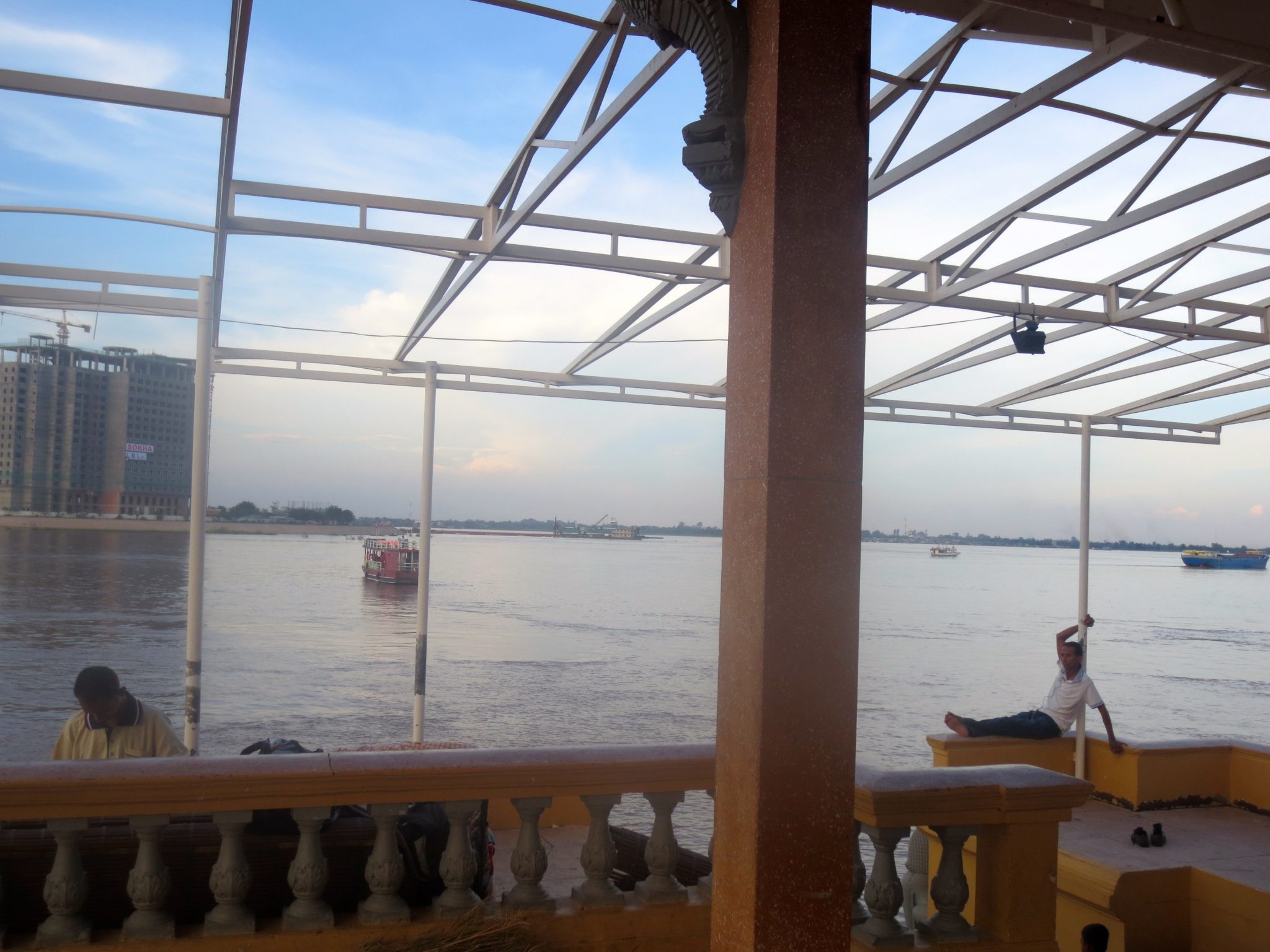 In the past two weeks, I’ve come to terms with surviving hours upon hours on sweaty suffocating buses, I’ve learned how to cross a road full of thousands of mopeds, and thus have had at least three near-death experiences. I’ve grown to appreciate a nice ice cold shower, and how to deal with street hawkers of all sorts. I’ve been groped, I’ve been eaten by mosquitos, I’ve spent more than enough hours in airport waiting halls.

We’ve had one tiny travel breakdown in Singapore, and Laura was almost robbed by a wannabe moped thief in Ho Chi Minh. I’ve drank my weight in fresh fruit smoothies in every place I’ve been, I’m averaging reading about one book per week. I’ve had sleepless nights due to noisy dorm mates and stray dogs barking, I’ve had the best nights sleeping in run down $5 dorm beds, and I’ve had more than a few vivid Malaria pill induced dreams. I’ve been lost more times than I can count, but I always seem to find my way again. 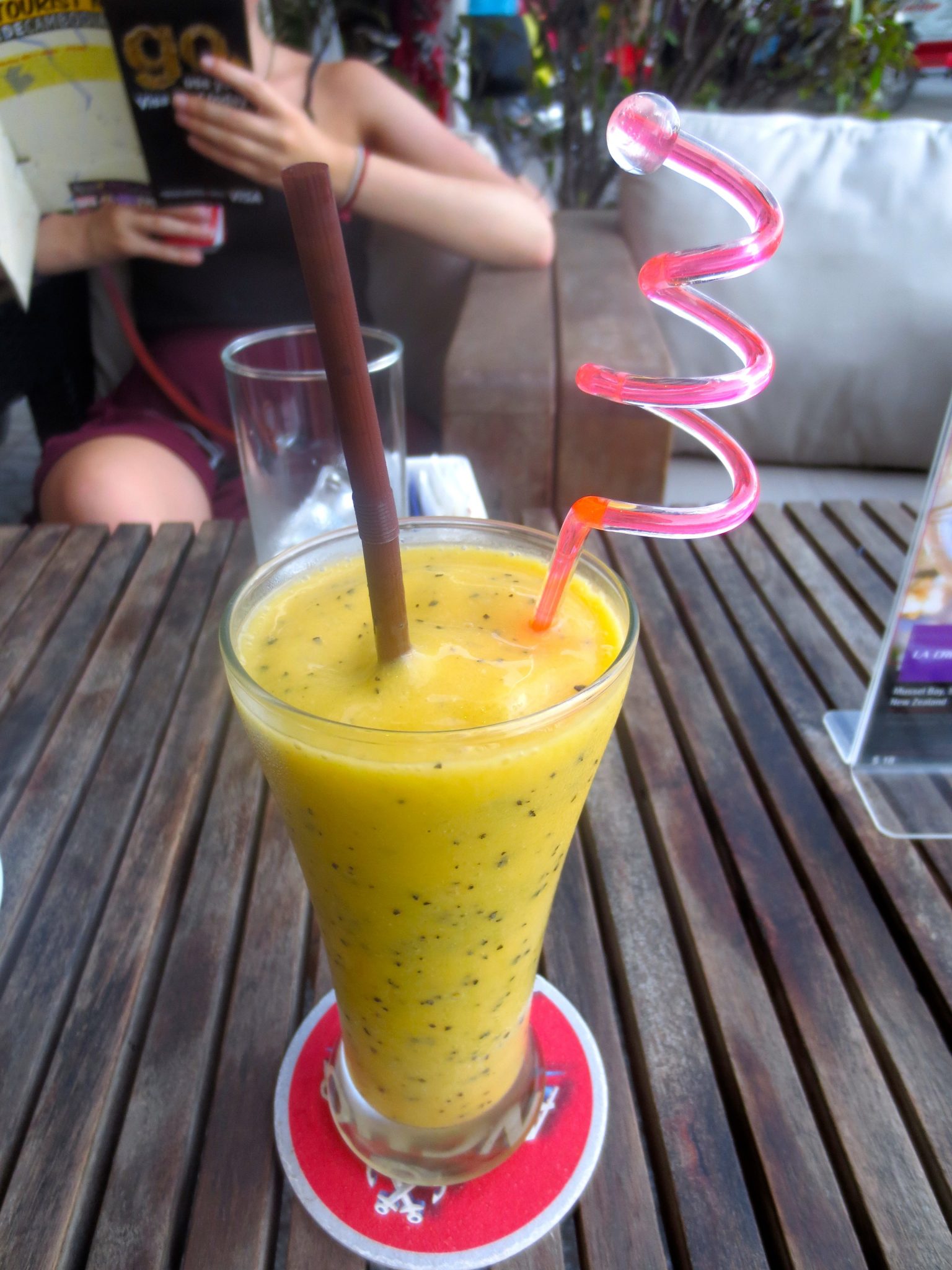 Although I liked Kuala Lumpur, I was constantly worried about attracting too much attention to myself due to its slightly conservative nature, especially in certain areas. I was still aggressively groped by a man on a moped, and still sexually harassed by local men the majority of the time I was there.

Much to my surprise (since I thought this would actually be my favorite country) , no matter how much I tried to force it, Bali and I just didn’t get along, with one exception – yay Ubud! More to be written about my time in Bali soon.

I loved how modern and forward-thinking of a city Singapore turned out to be, but it was more expensive than any other country I’ll be visiting on my trip.

I think I will grow to absolutely love Vietnam when I come back in October for a couple weeks. I’ve only spent a few days there so far, but I even liked the crazy energy of Ho Chi Minh City, to an extent.

I wasn’t sure what to expect with backpacking Cambodia. When we first arrived, we stumbled off in the searing heat, tired from a 6 hour bus ride. A ride that consisted of a combination of a John Hughes movie, a Chinese gangster movie, and a kung fu movie dubbed in Vietnamese…oh, and of course, the important part, our first legit land border crossing. It turned out to be a piece of cake (with American dollars), thank god. I had heard more than a few horror stories of the border crossings in Southeast Asia. 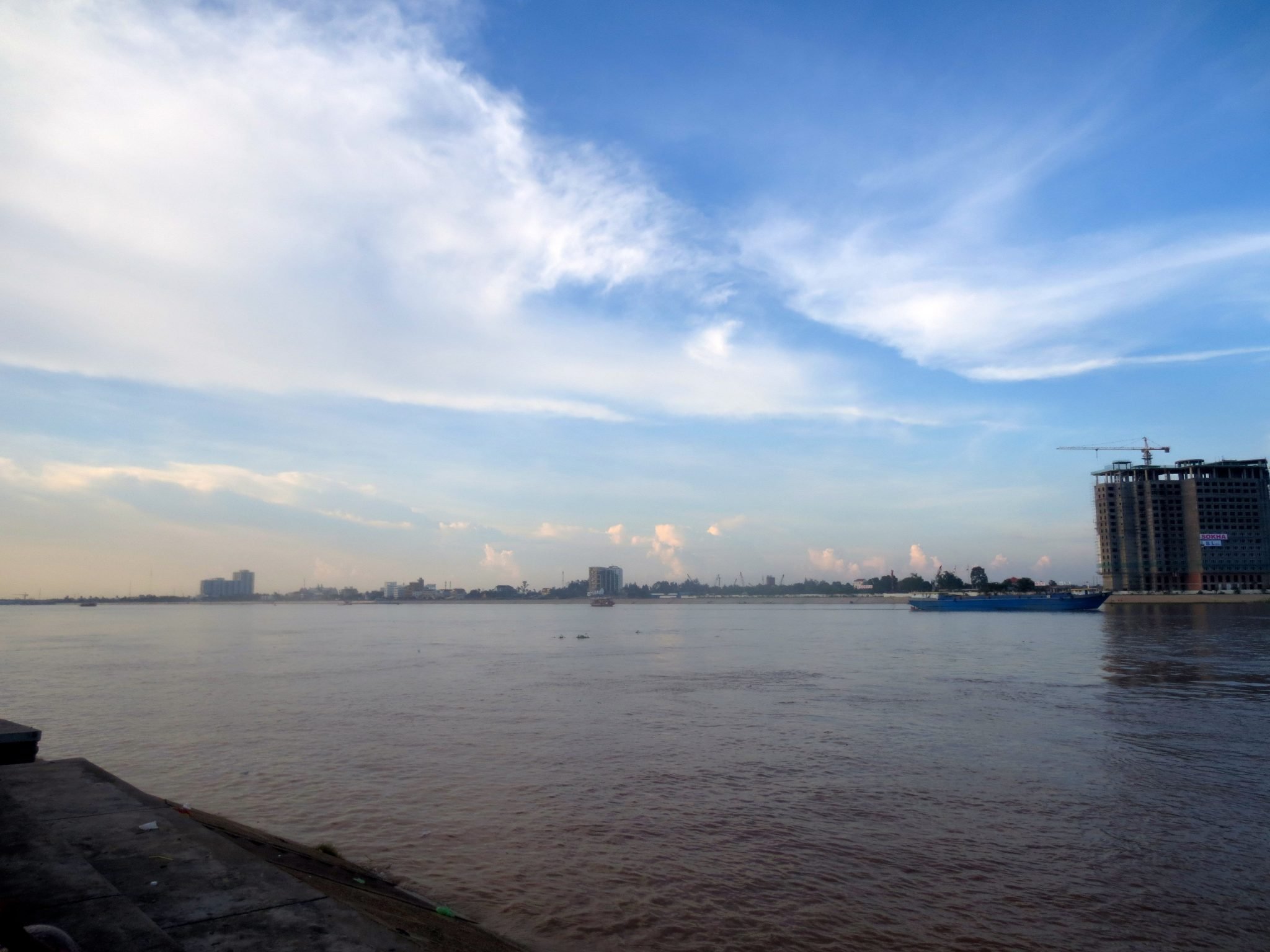 We had to take a tuk tuk to get to the main part of town from where the bus dropped us, but there was the small issue of having no local money. The first ATM we went to wouldn’t accept our cards, and we thought for a good 15 minutes while we were roaming the streets with our heavy backpacks, that we were going to be penniless in Cambodia, until we found another one that worked. The ATMs here give you US dollars, and most restaurants and stores put their prices in the same, US currency. It’s so strange seeing my own money again, it has been so long.

Even with our initial hiccup, after we got into our first tuk tuk, I had this overwhelming good feeling about the city of Phnom Penh, before I had even begun to explore it. 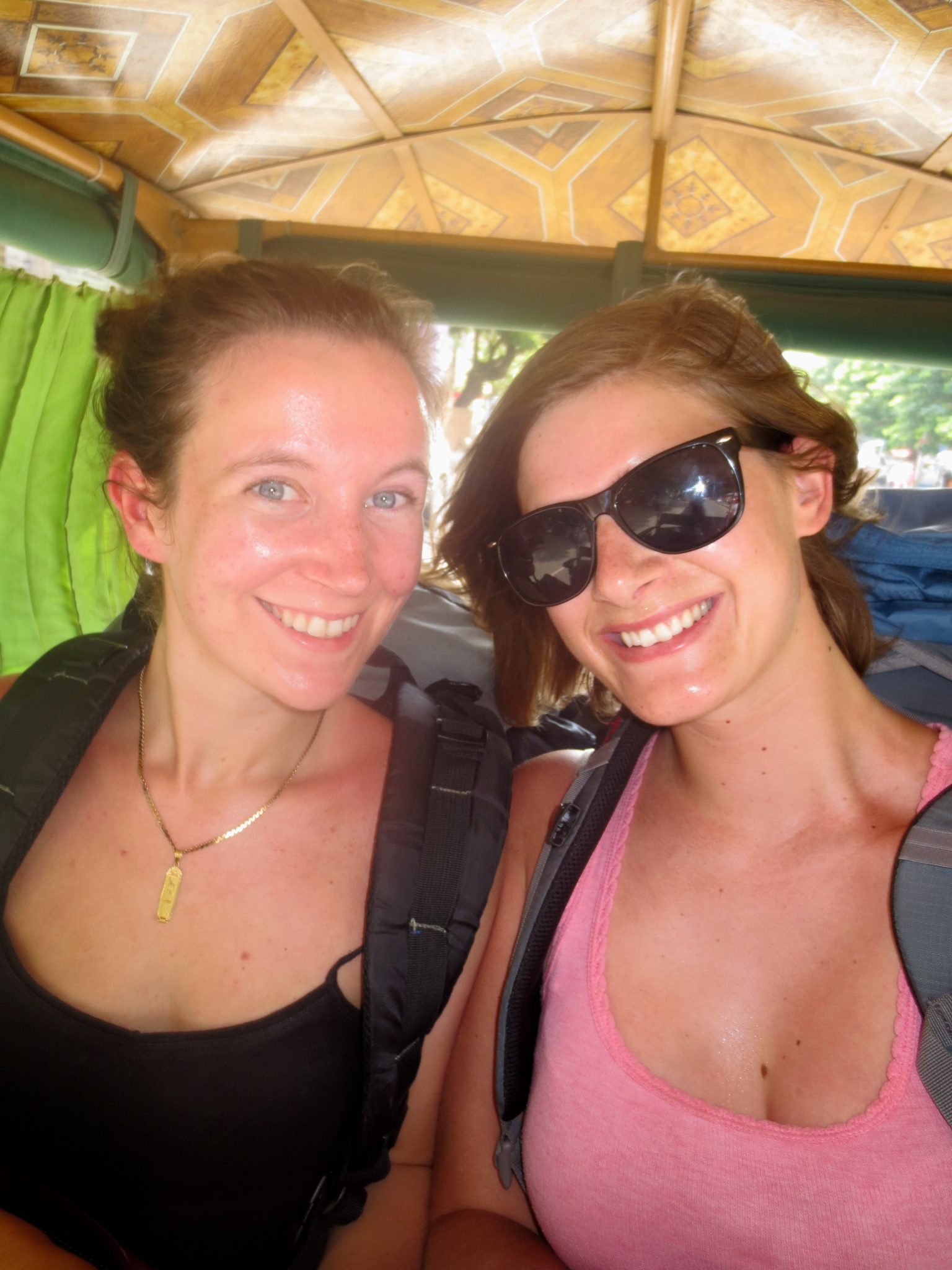 The rest of the afternoon and evening just proved my initial feelings right. I love the buildings, adorned in gold and intricate patterns. There are Buddhist monks in their classic orange attire everywhere. The people here (and in Vietnam) are the friendliest strangers I think I have ever met in my life. Even the street hawkers seem nicer (although the children are a bit cheeky), constantly asking me if I want a tuk tuk ride, or telling me that I have a beautiful smile, but not in a gross way. 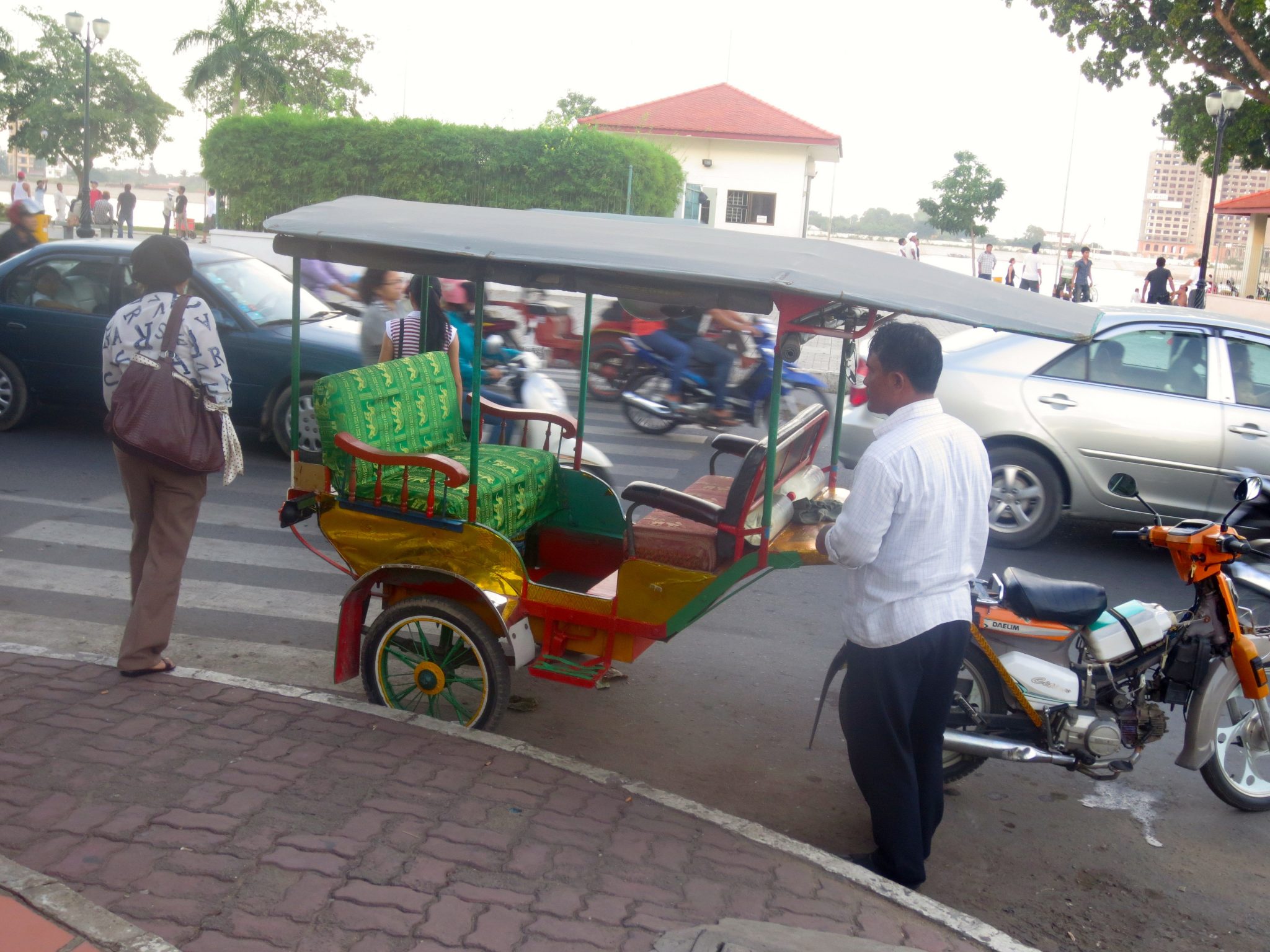 I don’t feel like I have to be paranoid about my belongings as I did, constantly on edge, in Ho Chi Minh City. The pace is a bit slower here, the Mekong river is beautiful, and I feel at home. There was even a huge group of people doing Cambodian style Zumba across the street from us in a main square while we were grabbing coffee and smoothies.

I love our guesthouse, it’s my favorite of the places we’ve stayed so far, and it’s only $5 a night! Our dorm is incredibly clean, roommates friendly, it has a rooftop bar, and an adorable puppy the runs around everywhere. 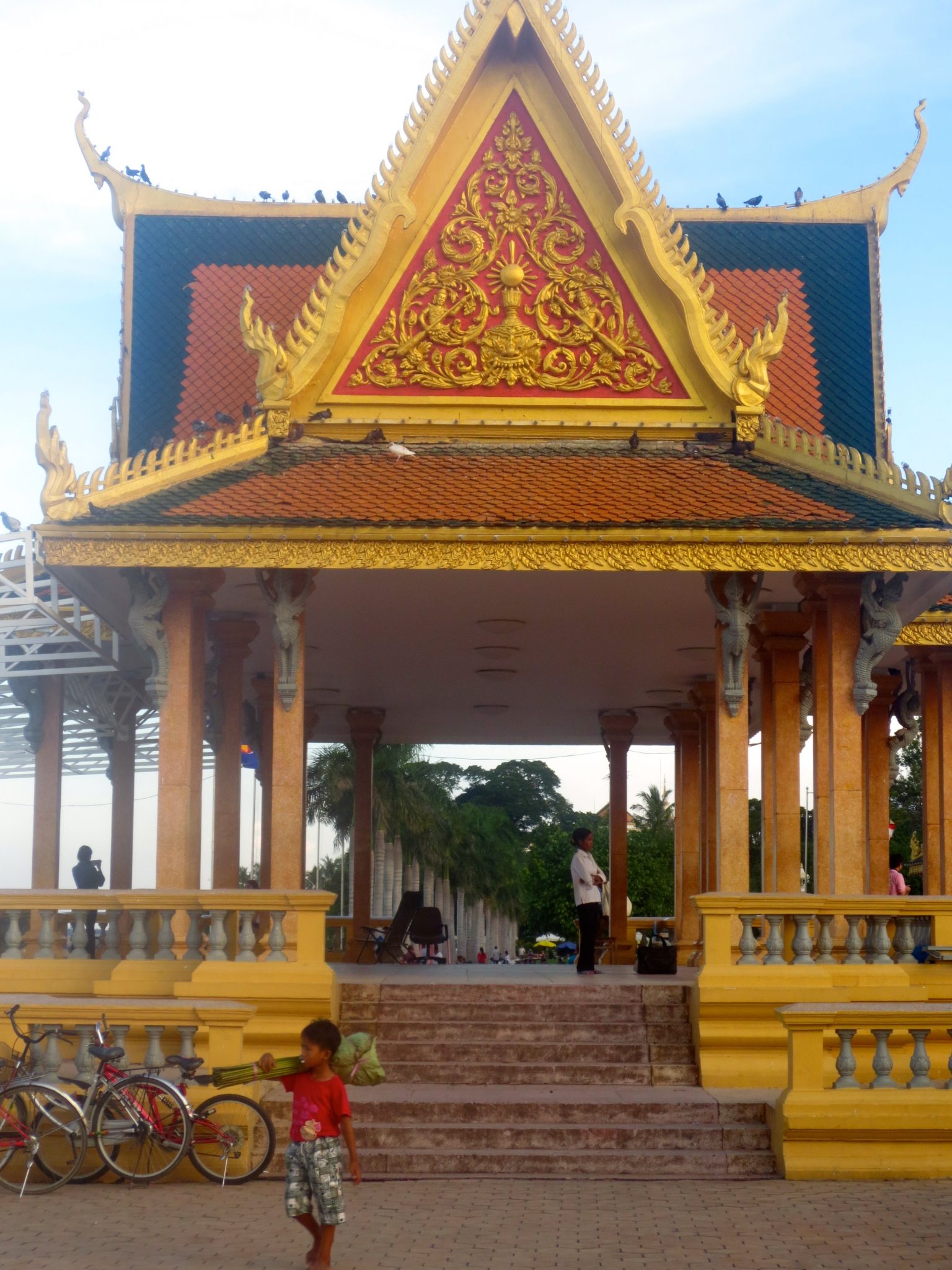 Tomorrow we’re going to see a harsher, but important side to Cambodian history, the destruction left behind by the Khmer Rouge at the Killing Fields, and I’ll explore a bit more of Phnom Penh. From there, I’ll be heading south to Sihanoukville to face one of my fears (the ocean), and get my scuba certification on the tiny island paradise that is Koh Rong. A few days after that, we’ll be heading up to Siem Reap to dive into the local delicacies (grilled tarantula, cricket, duck embryo, etc), and explore the ancient sites of Angkor Wat and Angkor Thom. 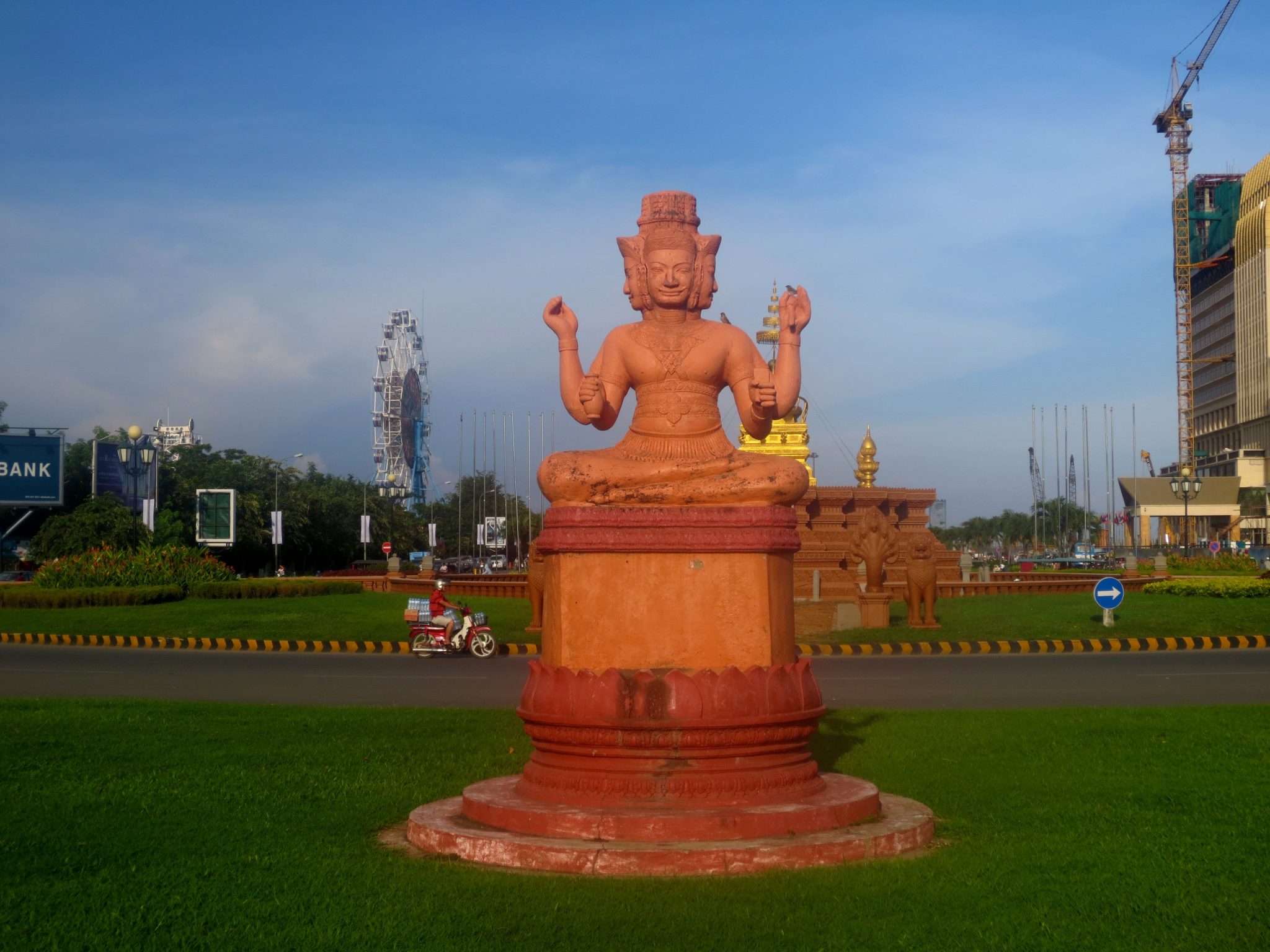 The truth is that I already know I heart Cambodia, and I can’t wait to explore more of it <3