Tales From My First Footy Match in Melbourne 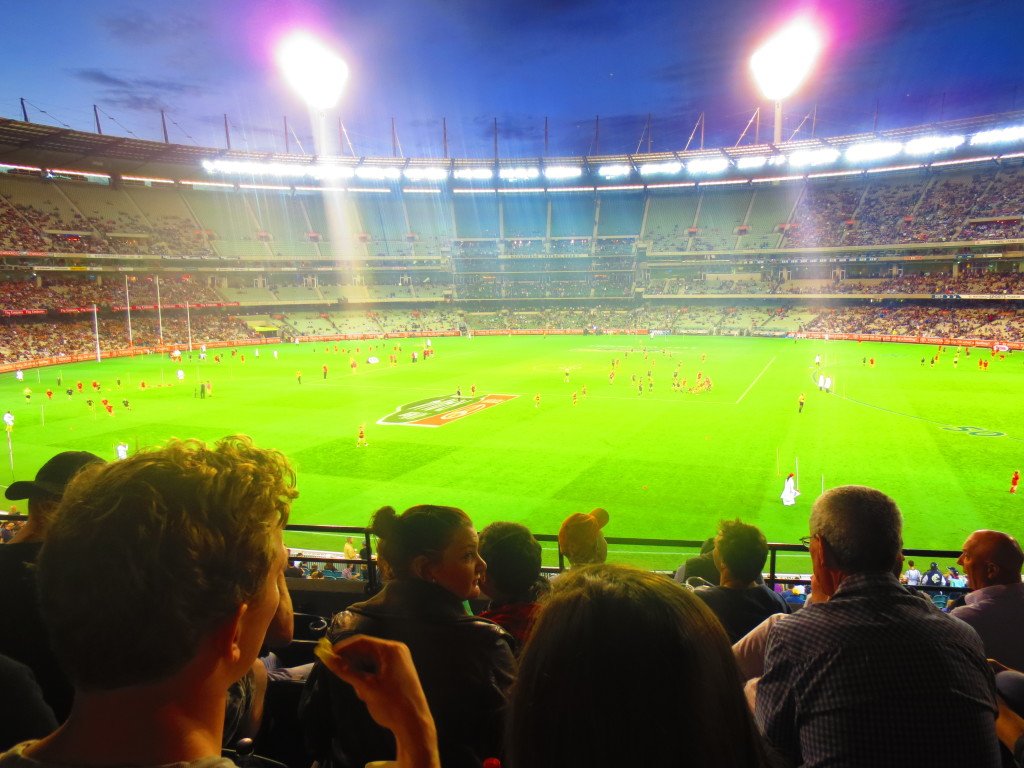 Experiencing the popular world of ‘footy’ with a local in Melbourne.

When I met avid Carlton Blues fan, Will, through a few mutual friends last weekend, I knew I couldn’t turn down his offer to take me to my first footy game ever. I heard about this mythical “footy” game back in the States, but had no idea what to make of it.

I found it to be a mixture of a variety of sports.

The field is in the shape of an oval like cricket, tackling is allowed like rugby, you kick the ball to pass and score like soccer, but you catch the ball with your hands like American football, and it has the pace and excitement of basketball, as well as its own set of unique AFL rules.

In my opinion, the best parts of all these different sports were combined to make the ultimate Australian sport, also known as the Australian Football League, AFL, or footy.

Will and I met for a couple pots of beer before heading to the MCG arena, and let me tell you, Australians take their footy seriously. Besides maybe cricket, AFL is the sport to watch and follow in Australia, well, at least in Melbourne.

The trams are always packed on game day, and when I walked into the bar, everyone was wearing their respective team colors, scarves, and/or beanies. Thankfully, Will let me borrow his Carlton scarf so I could look like a true Blues fan.

Even with a healthy amount of rivalry and drinking before, during, and after the game, footy fans are hardly ever known for getting into fights or displaying bad sportsmanship.

This goes well with my initial perception of Australians as a whole, and their general “no worries” attitude that I find so common over here. They know it’s all in good fun. However, that doesn’t keep them from shouting at refs for calls against their team, or showcasing their die hard team loyalty every chance they get, as does any good sports fan. 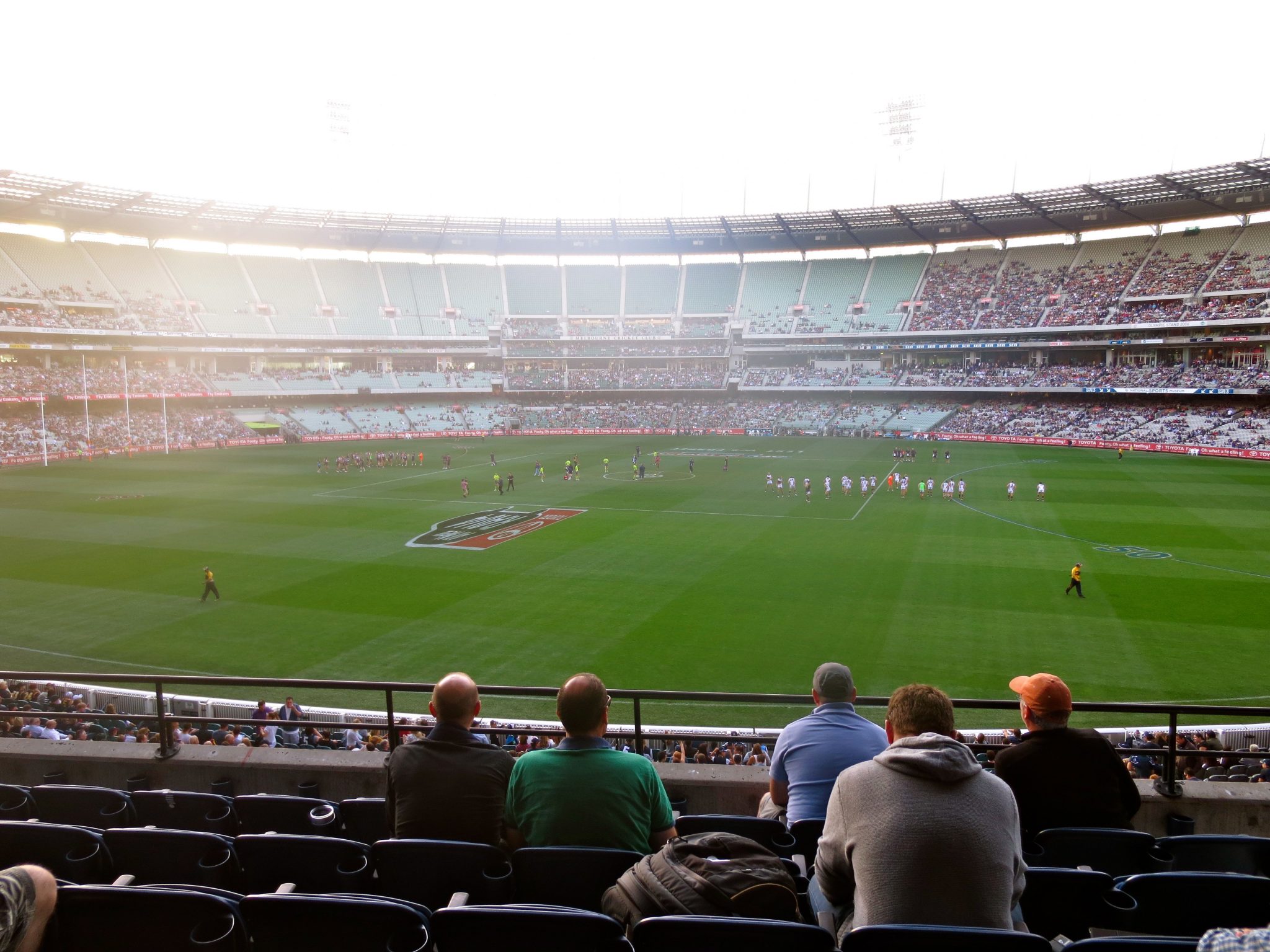 When we walked into the MCG and I got my first look at the field, my jaw dropped from excitement. I’ve been to San Francisco Giants games before, but that’s about it in terms of watching professional sports live.

I’ve never been to an NFL or NBA game. So, when I walked in and got my first glimpse of the huge oval field, I was a bit starstruck. It helped that it was also an open air stadium on a gorgeous day in Melbourne, and the sun was setting as the game played on.

A funny fact about the MCG is that because it’s open air and everyone leaves their food behind after the game, they have quite the seagull problem.

At one point, the seagulls must have been taking up a third of the field, moving only when players ran in their direction. Apparently, they sometimes put a hawk at the top of the stadium to act as a scarecrow of sorts to deter the seagulls, I don’t think it has worked very well yet.

Another aspect I like about AFL games is the halftime show. Unlike American halftime shows, and I guess even Australian rugby games, where it’s all about the cheerleading routines, for AFL, halftime primary school kids from a variety of grades come out in team colors and play pick up games on the field.

It was adorable, especially watching the really young ones who don’t know how to kick the footy yet but are just excited to be there. 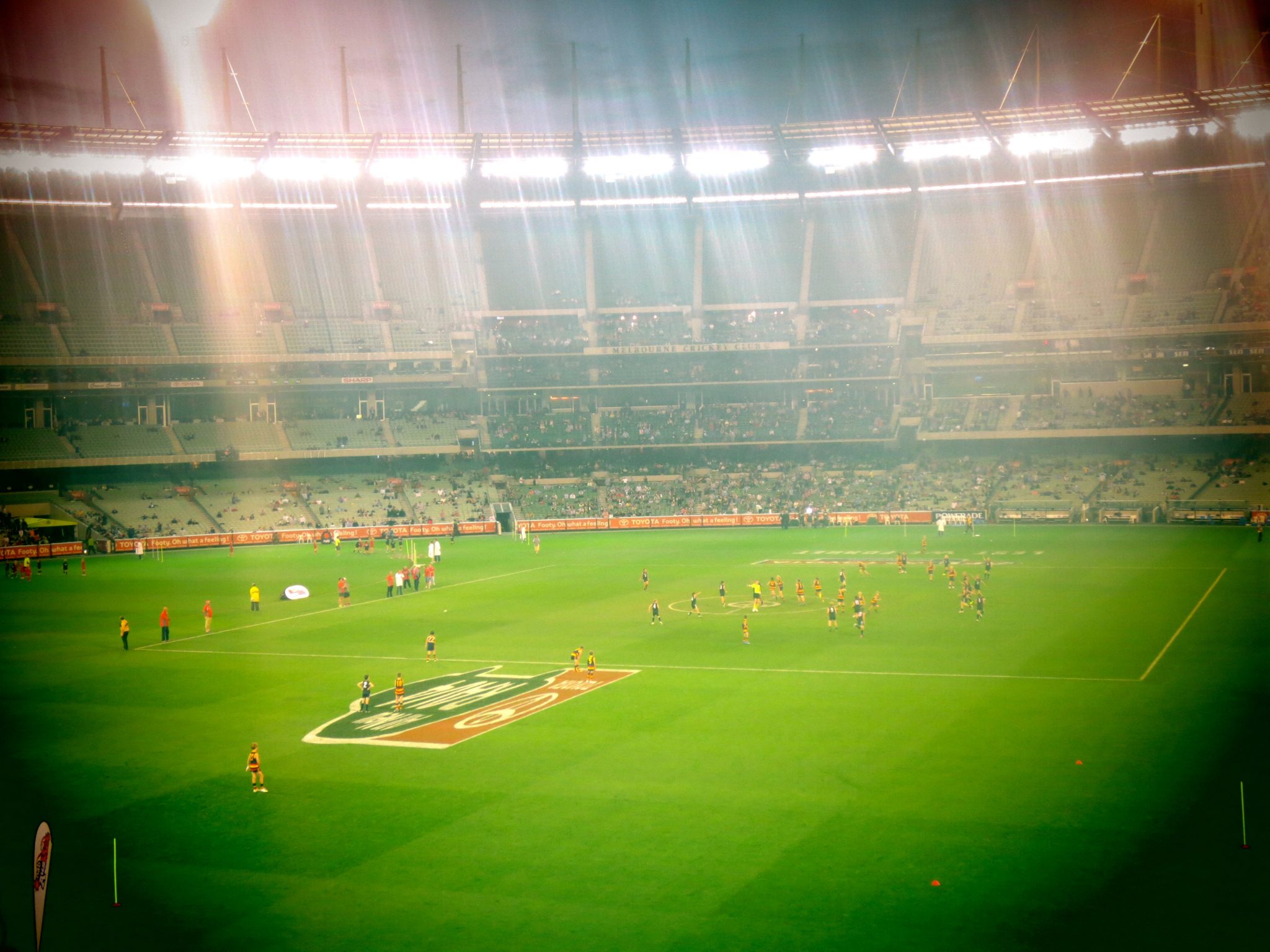 I’m happy to say that Carlton played a great game and won the match against the Adelaide Crows. The Carlton theme song came on at the end, and all the Carlton fans stood up and started chanting along with it.

It has been a great week, the highlight with me finding a bartending gig after all of my job hunting, and my time at the footy match was a pretty perfect ending to it.

I can’t wait until my next AFL game when I can experience it all over again, and hopefully next time be able to sing along to the Carlton victory song when they win.

Have you heard of footy or been to a match before?