Skydiving Taupo: Learning How to Fly in the Skydiving Capital of the World 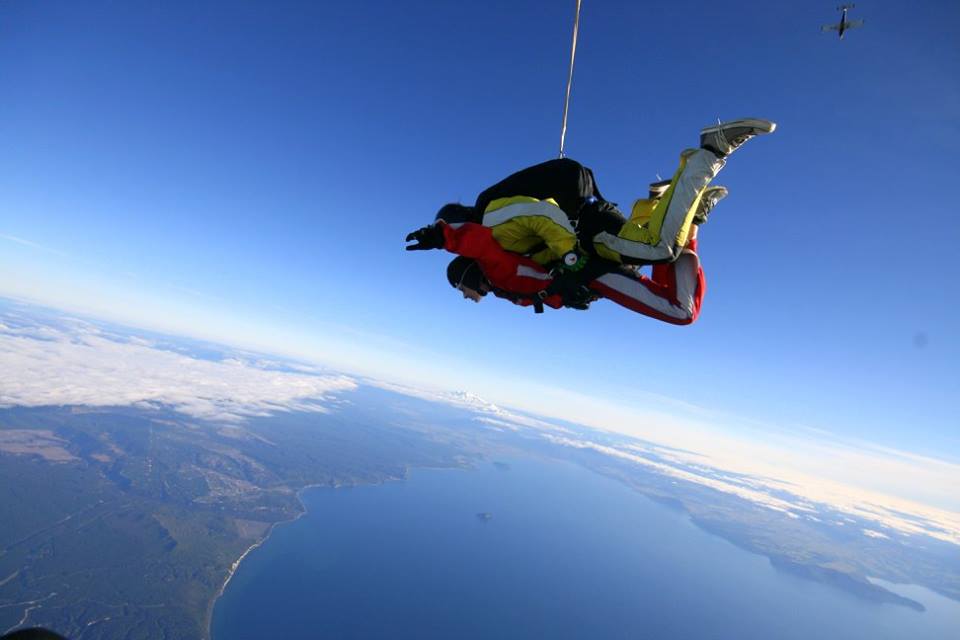 Skydiving Taupo was the most adventurous moment of my life. This was my experience getting outside of my comfort zone in the skydiving capital of the world.

When I came to New Zealand, I knew I wanted to test my boundaries, face my fears, and open myself to new experiences.

I was originally planning on skydiving over The Great Barrier Reef in Australia, but due to very low finances at the end of my time in the country, and a bit of chickening out on my part, it didn’t happen.

I’m glad it didn’t work out in Australia. Although it would’ve been beautiful over the Reef, I was happy to have jumped out of a plane in the skydiving capital of the world in Taupo, New Zealand.

There’s a reason why it’s the world capital for skydiving.

One, it’s located in a country known for its adrenaline activities and extreme sports. And two, Taupo is damn beautiful from that high up in the sky.

On a clear day Skydiving Taupo, a city located in the center of the North Island, you can see the three major volcanoes lining the landscape in the North, including Mt. Taranaki, all the way on the West Coast.

A fact that is both breathtaking and crazy when you realize how small in width New Zealand must be to be able to have that view. 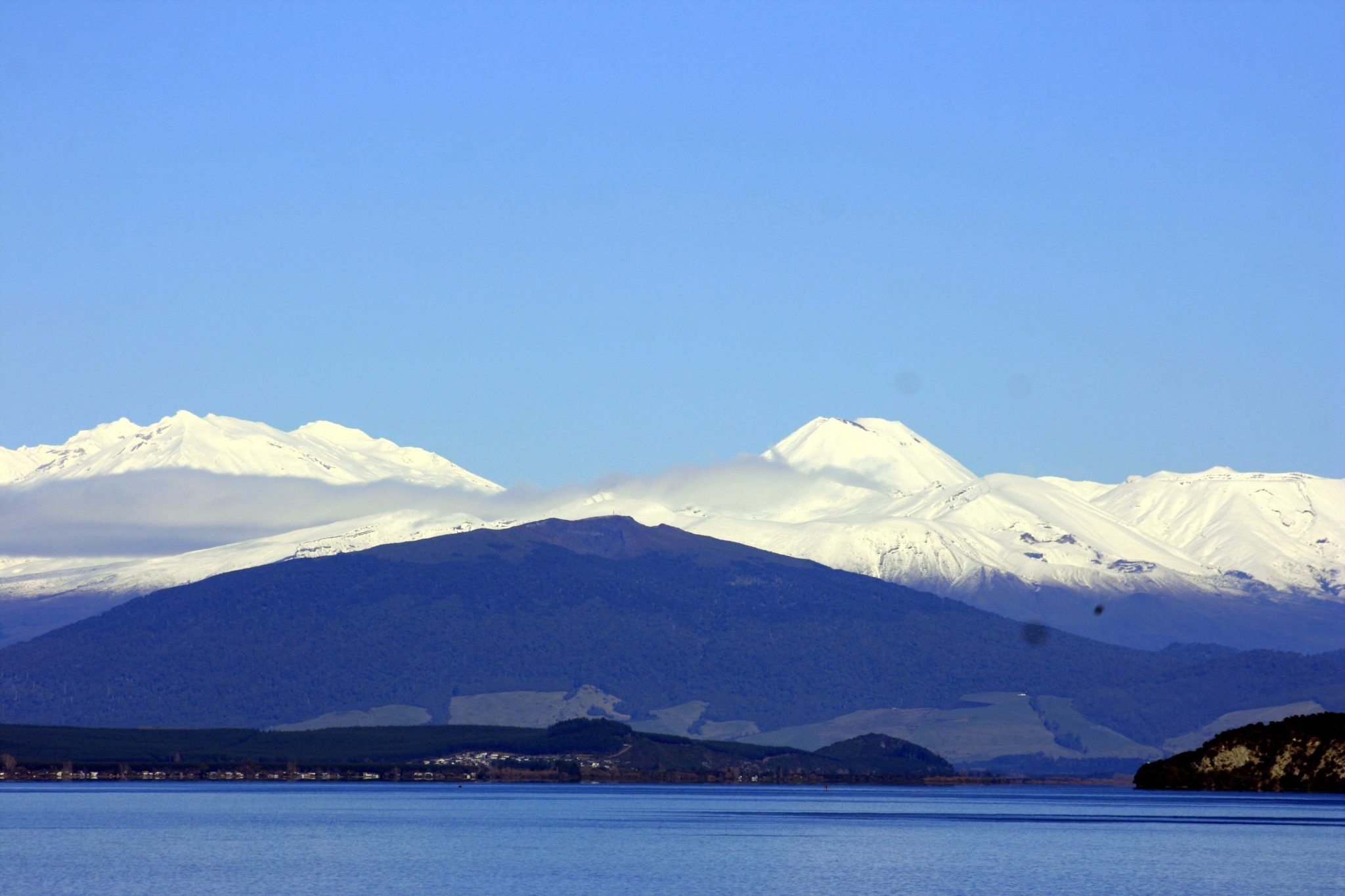 I planned my trip to Taupo with two of my good friends in Wellington, but decided to stay an extra day to go skydiving on the last day. I knew I wouldn’t be satisfied with myself unless I strapped myself to a beautiful stranger and just let go.

It’s the skydiving capital of the world, after all. I was out of excuses as to why I couldn’t jump out of a plane. I made my appointment with Taupo Tandem Skydiving and tried not to think about it too much.

The three of us woke up in the hostel to overcast skies. After grabbing breakfast, the weather still had not cleared up, so I called to cancel my jump, not wanting to spend half a grand on bad weather.

The guy on the phone was convinced that it was just a morning fog and that it would clear up by afternoon, so I pushed my jump back a few hours.

Now it was just dependent on the weather. I kept looking up at the sky every few minutes, seeing if anything had changed, on edge as to whether I was going to throw myself out of a plane or not that day.

We still had time to kill before my friends had to be back on the bus to Wellington, so we went to the mighty Huka Falls, and a thermal park attraction called Craters of the Moon. All the while the sky stayed the same grey color.

Related: A Look at Taupo Through Street Art

I called and canceled my jump for the day. I had mixed emotions. On one hand, I was incredibly disappointed because I knew it was unlikely I’d make it back to Taupo and jump in the skydiving capital, which I thought was a pretty cool accomplishment.

On the other hand, I actually did have a legitimate excuse, and I was relieved that I didn’t have to take the jump just yet.

Within 30 minutes of canceling my appointment, the sun started to break through the cloudy landscape. By the time I was saying goodbye to the guys at the bus station, it had cleared up dramatically and it was suddenly blue skies with no wind. In other words, a perfect day for skydiving Taupo.

I went down to the beautiful Taupo waterfront by myself, holding my phone and eating an apple, working up the nerve to call back and make another appointment for the 4pm skydive.

At 3:30pm, I knew I had to call them or lose my chance to jump, so I shut off the part of my brain that always thinks too much and watched my fingers dial the numbers.

I didn’t waste time letting my mind wander to what I had just committed to, and ran back to the the hostel to get ready.

They picked me up 15 minutes later and I was on my way.

One thing that I was sincerely impressed with was how friendly the staff was at TTS. From the driver who picked me up, to the crew who checked me in, weighed me, and decked me out in an 80s-looking jump suit, and especially in terms of my tandem instructor, Ryan, I was pleasantly surprised with how professional, funny, and friendly they all were. 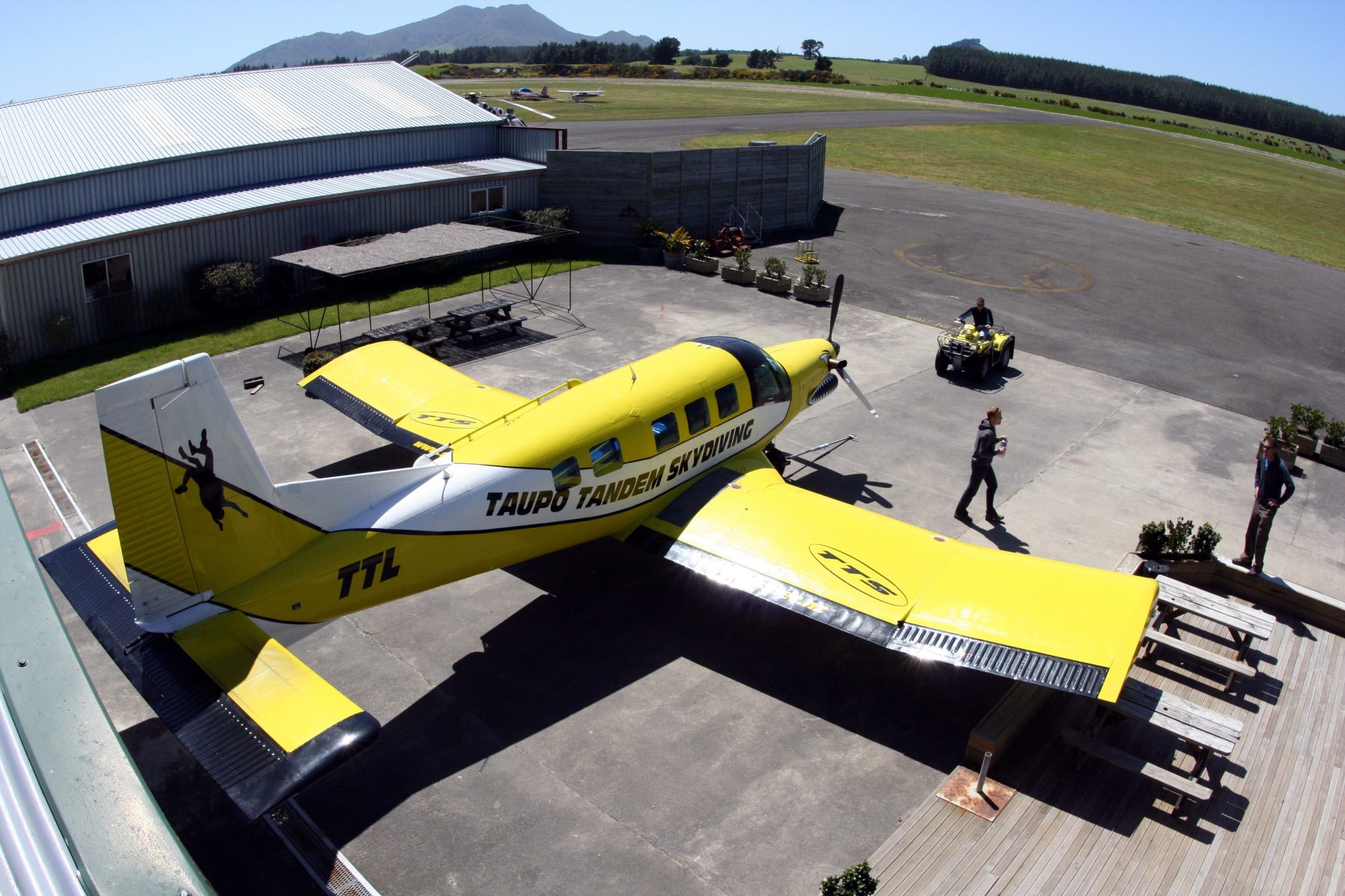 They took the time to get to know me and put me at ease, although I was surprisingly calm through the whole process, I had somehow left my nervousness back at the waterfront.

It took 20 minutes at most to get checked in and suited up after I quickly chose a photo/video package, and met my instructor and camera man.

We hopped on the plane first and slid down the little bench to where the pilot was already sitting. There was an American couple jumping as well, so with all the instructors, jumpers, and cameramen, it was about 10 people in total crammed into the tiny plane.

We quickly flew upwards in altitude, and even with the loudness of the plane, Ryan continued to get to know me, point out certain things about the terrain, and told me when we reached another 5,000 feet or so. 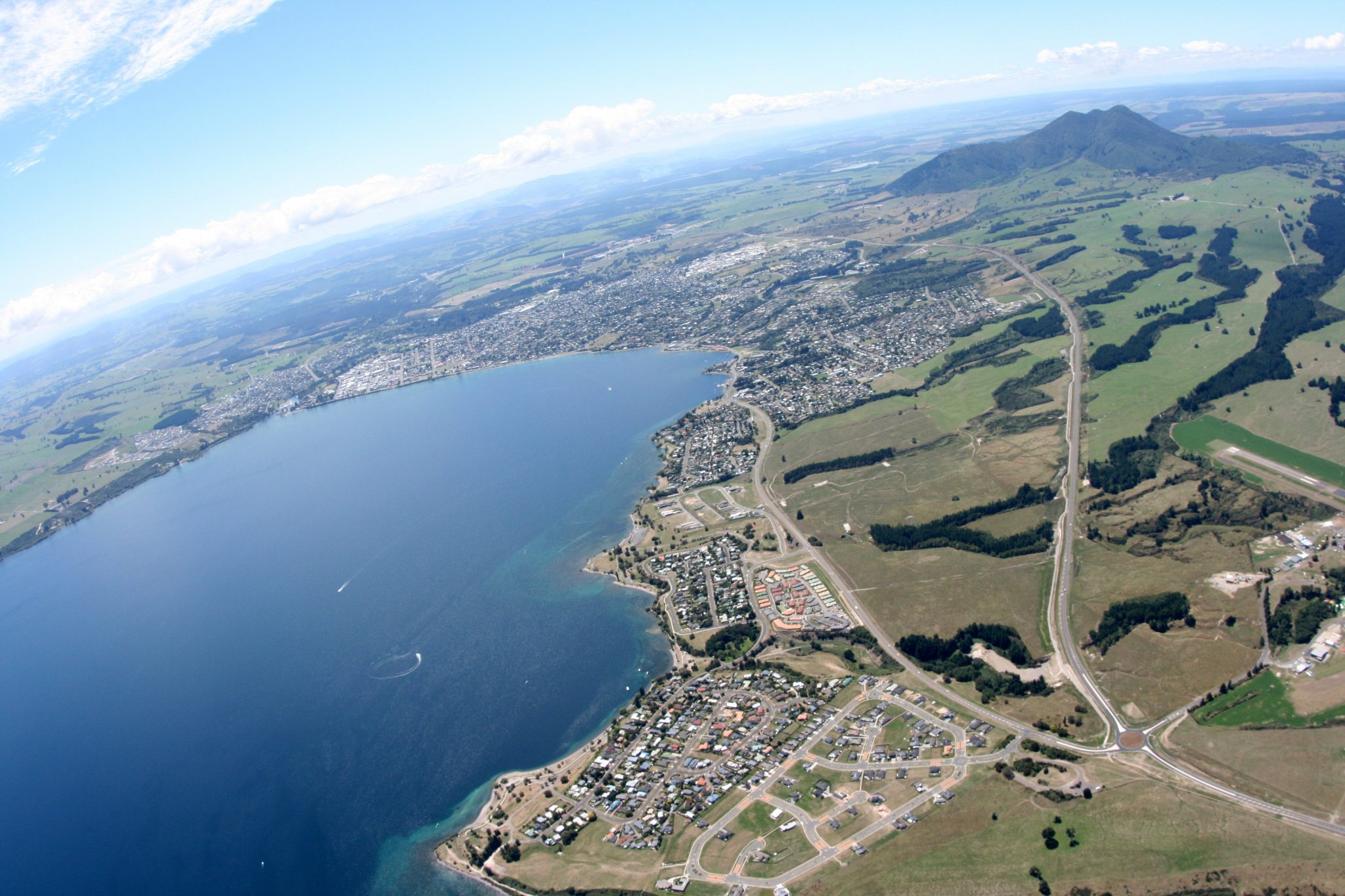 At one point after not talking for a few minutes and watching us continue our ascent, he yelled “BOO!” right in my ear making me jump and almost bump my head on the top of the plane. He said, “just making sure you’re ready”, and laughed manically. Again, the typical Kiwi sense of humor, he was a hoot!

He told me when we reached 12,000 feet, and soon after he handed me my goggles and aviator hat and told me to put on my oxygen mask.

Finally we were at 15,000 feet. The door opened and the sound in the already noisy plane grew to a deafening thunder as the wind was going past the plane.

The first two jumpers were the American couple. I chose not to watch them fall out of the plane, not wanting to lose my courage and I kept my gaze glued to the window. 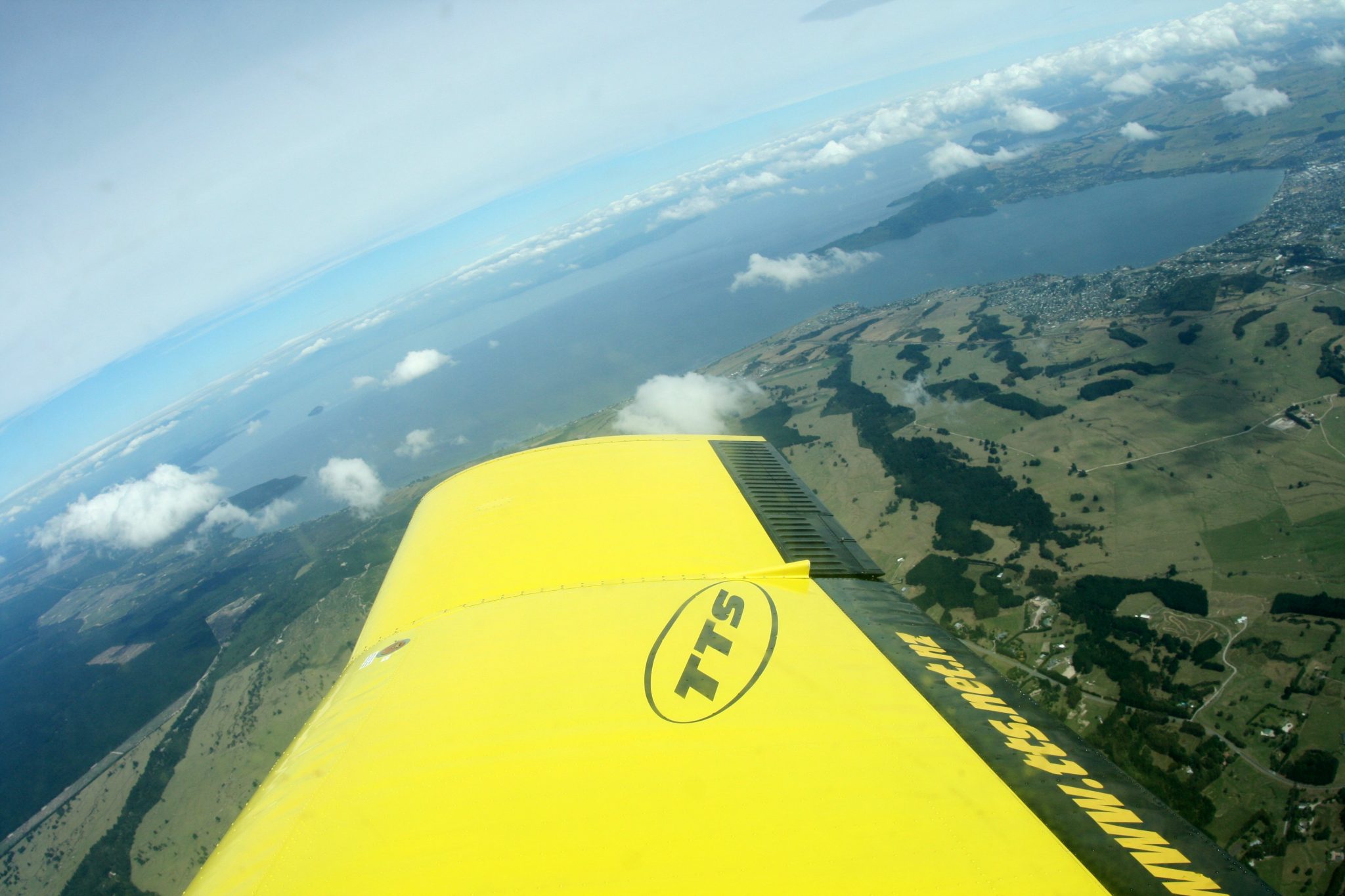 Within no time, it was my turn and Ryan started moving me towards the open door of the plane. I swallowed the lump in the back of my throat, made a cheeky face at the camera, and I must have closed my eyes as Ryan counted to three and jumped on two. 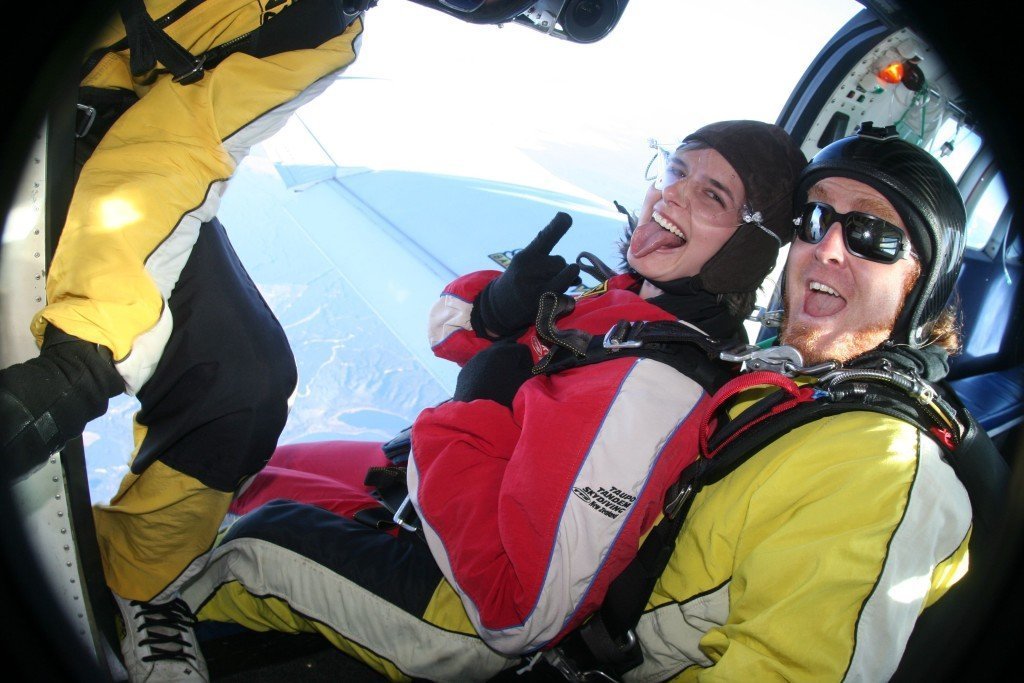 I immediately felt the sensation of free falling. It was easily the scariest feeling of my life, losing my sense of balance when I first left the plane.

I felt my whole body drop as we left the comfort of the plane. That’s when I opened my eyes to see all of Taupo laid out in front of me. 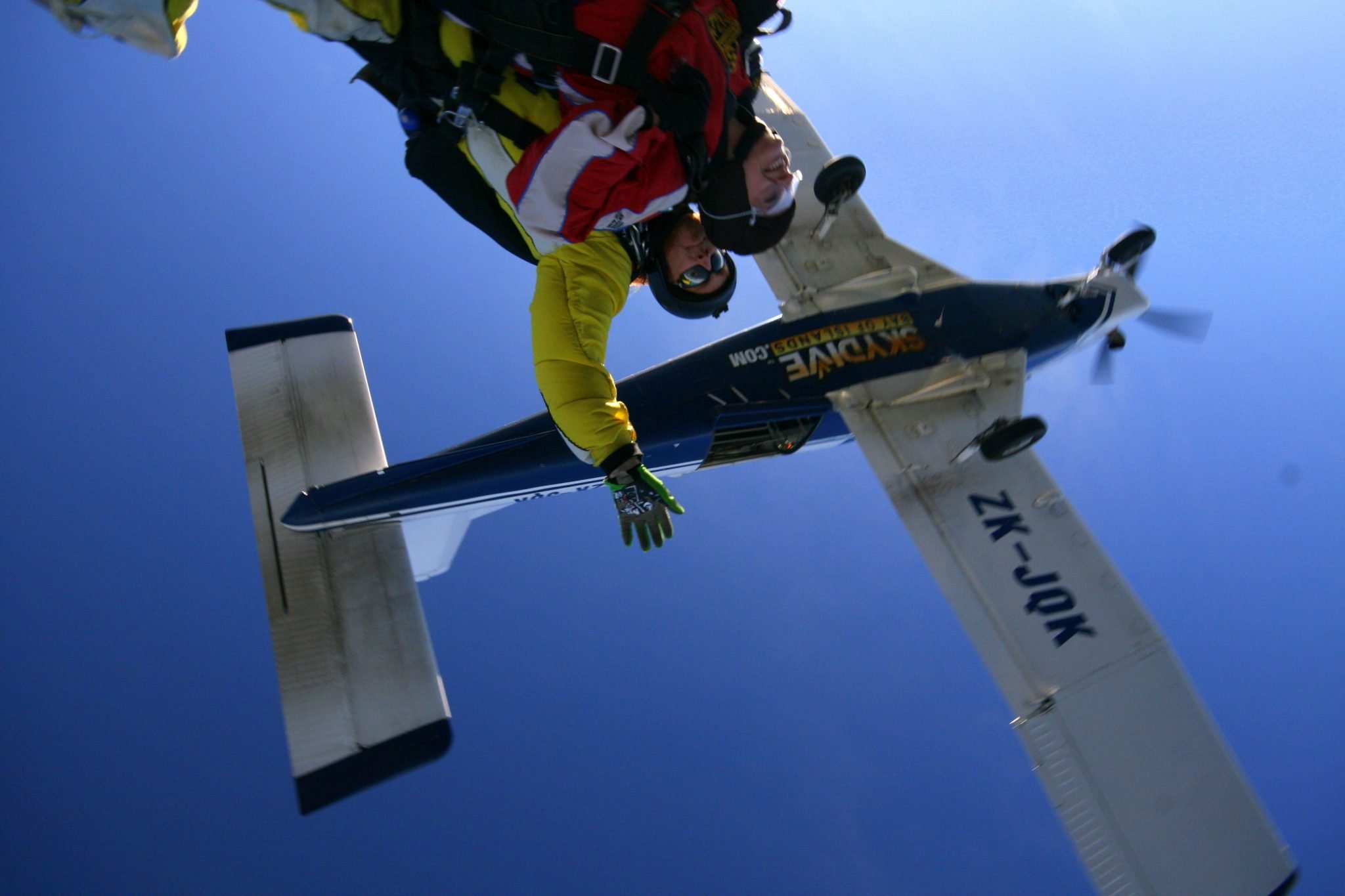 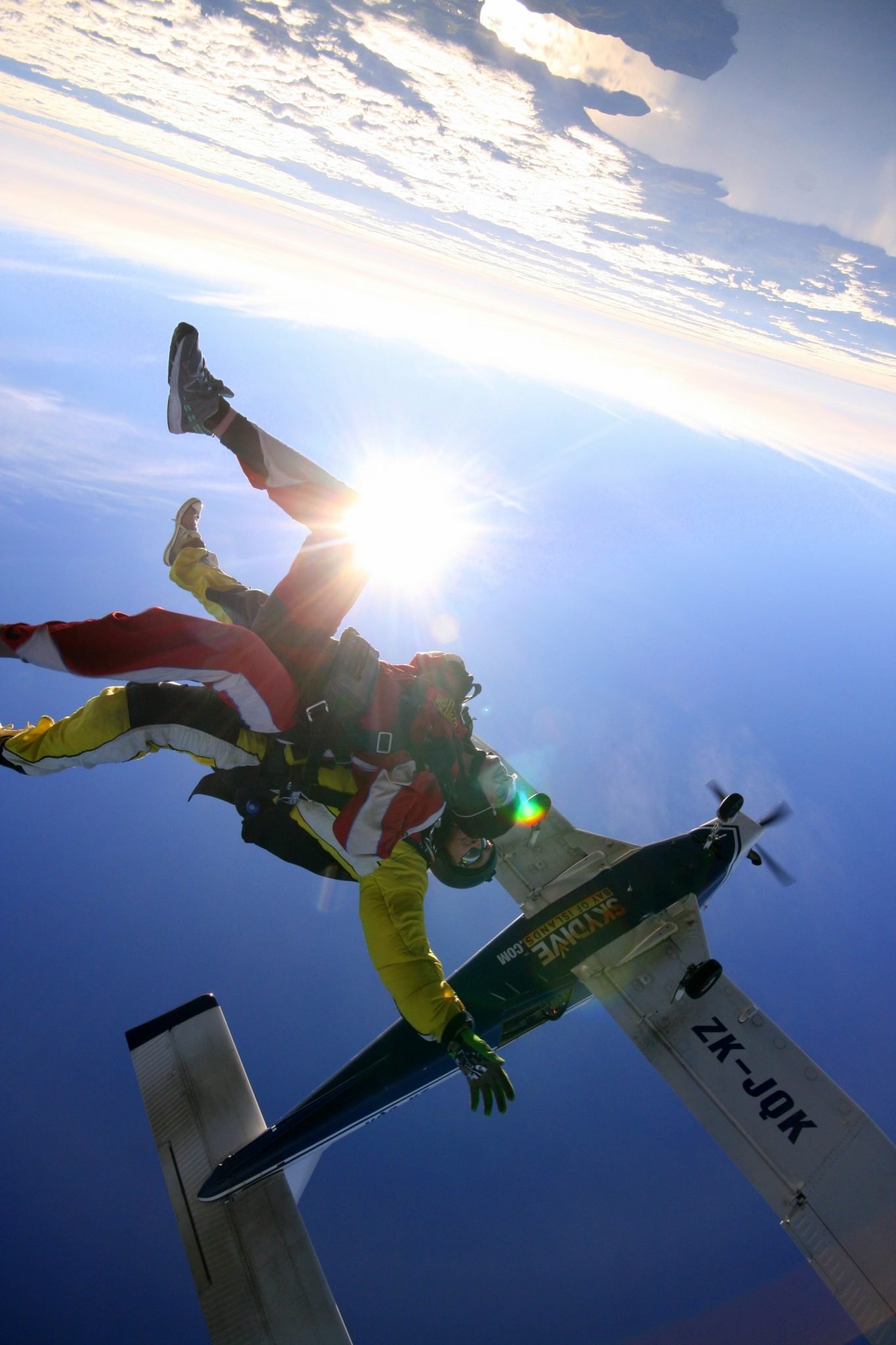 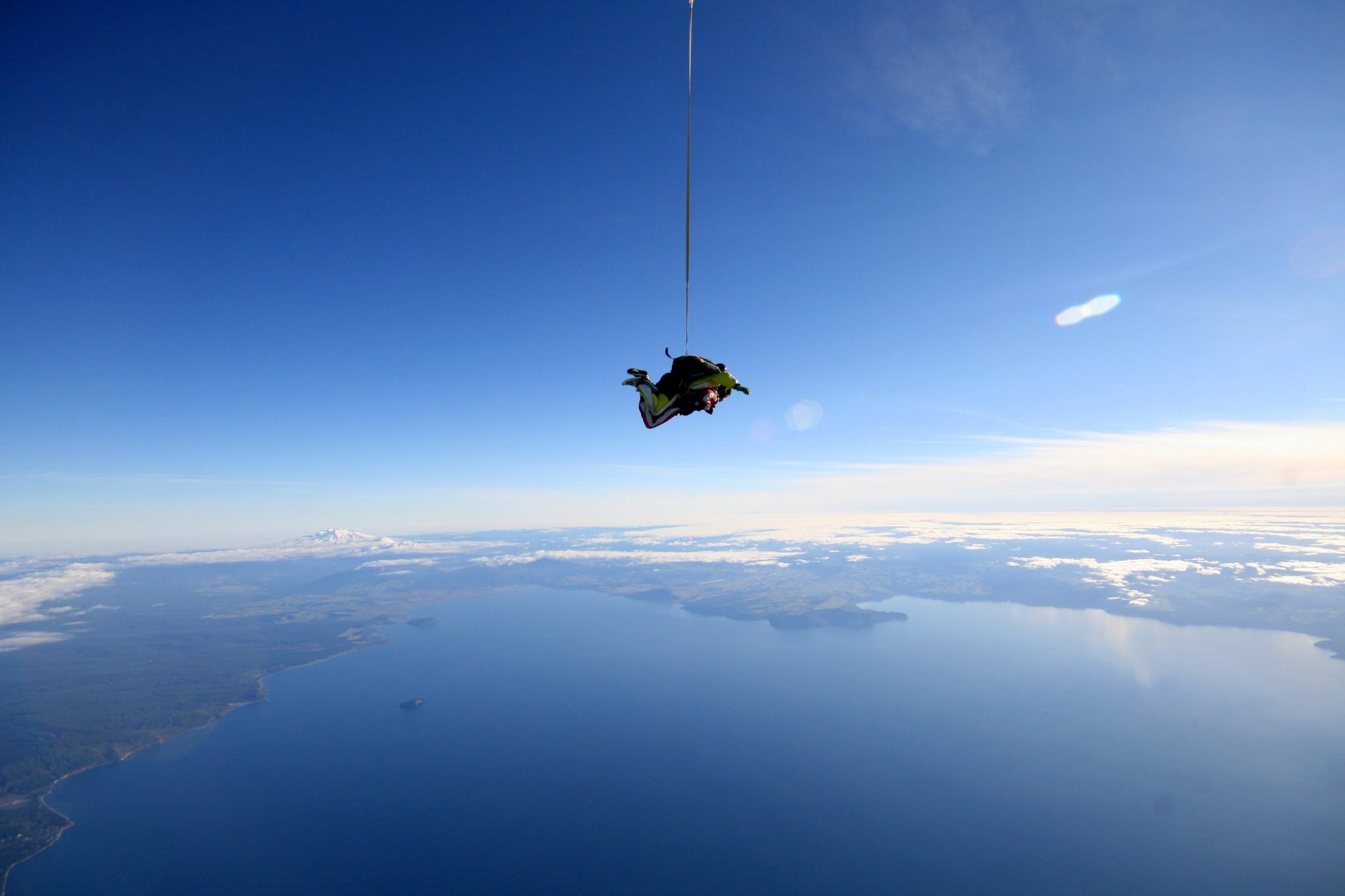 It was the craziest feeling, the wind coming up at me at 200 km/hr, and trying to breathe in gasps of air during free fall. A minute is a long time to fall and think about the choice you’ve just made in jumping out of a plane. 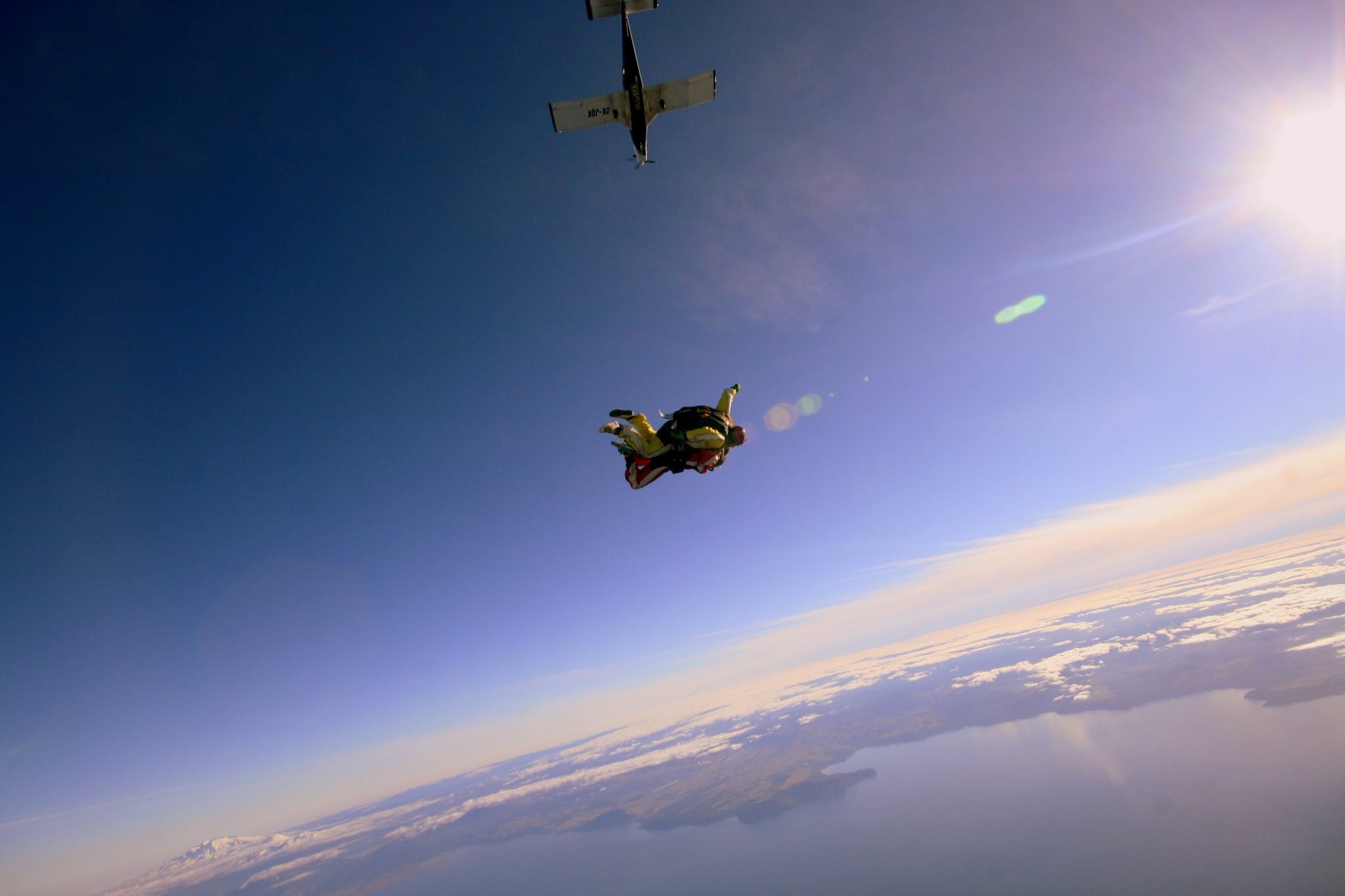 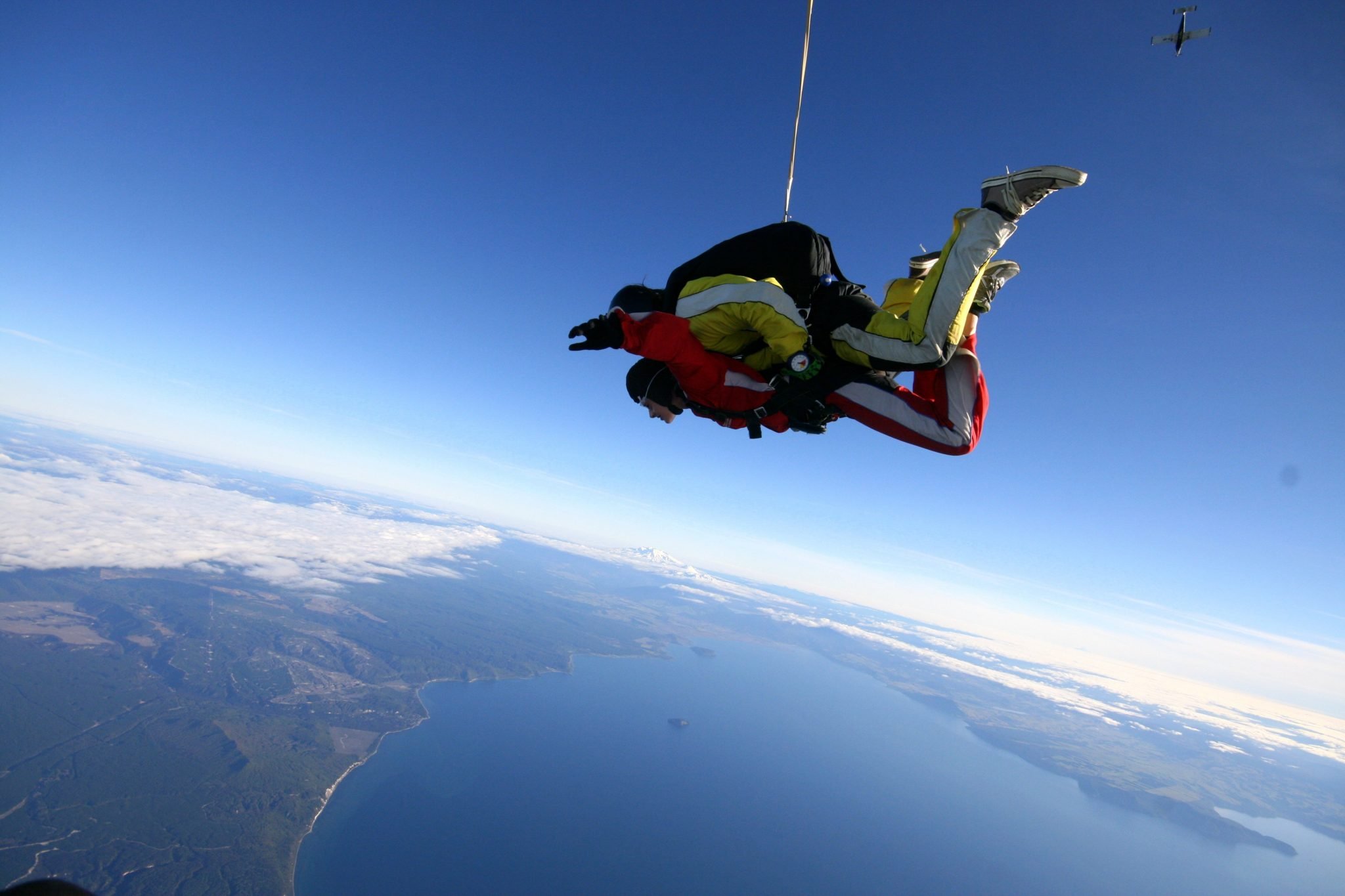 But even still, as soon as I started to enjoy the free fall, the parachute was released and I felt my stomach drop again as we went up. 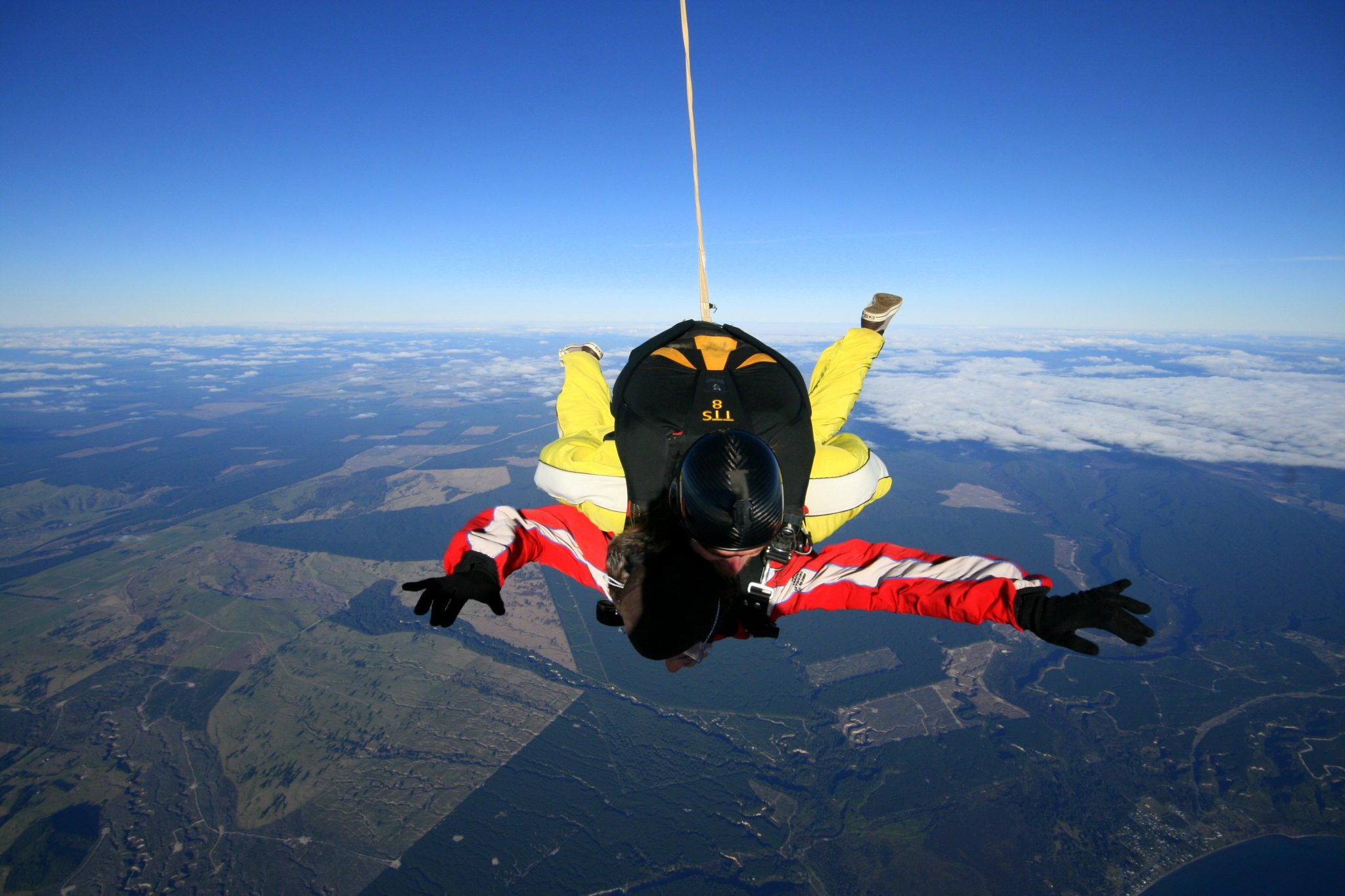 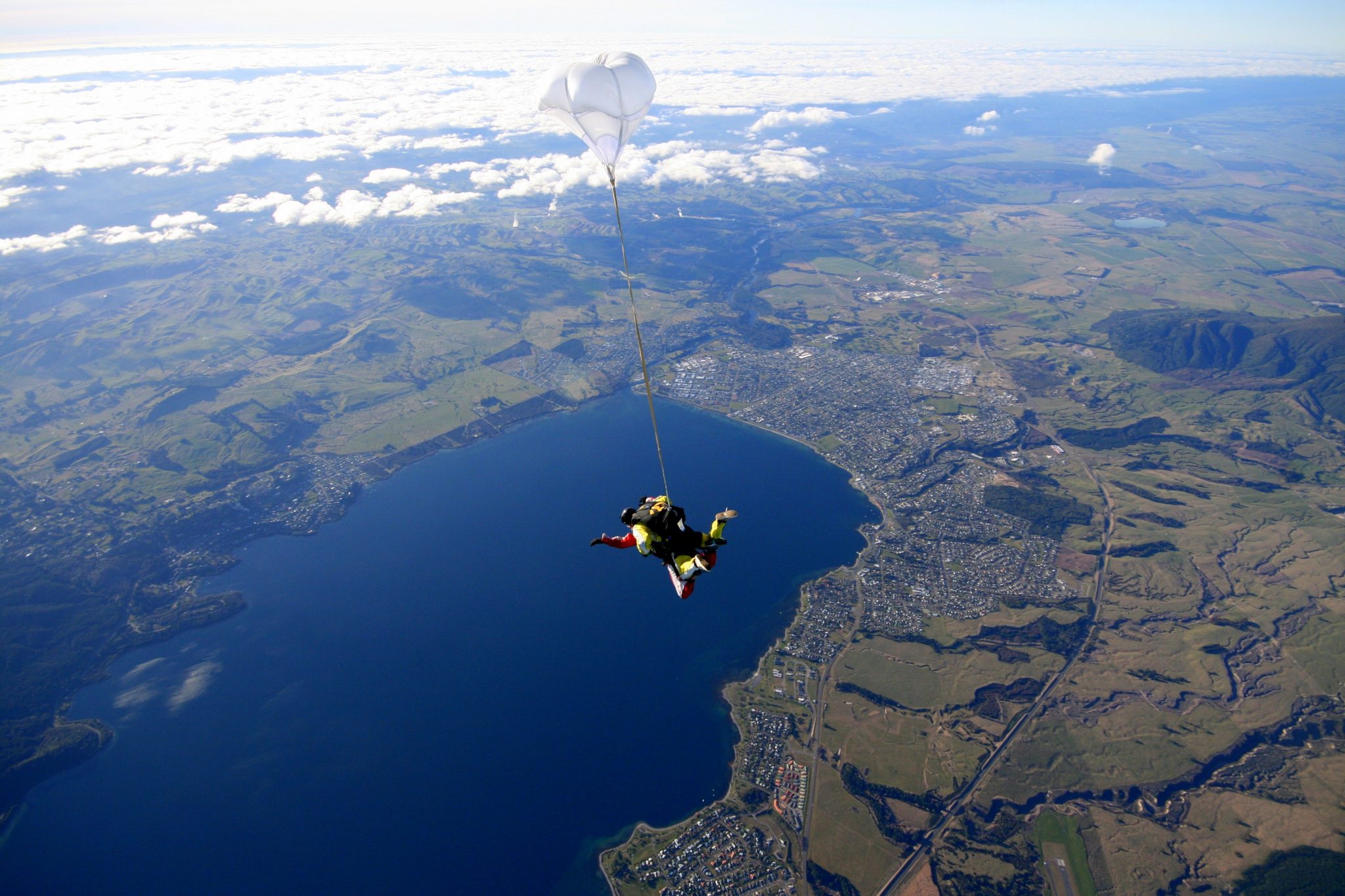 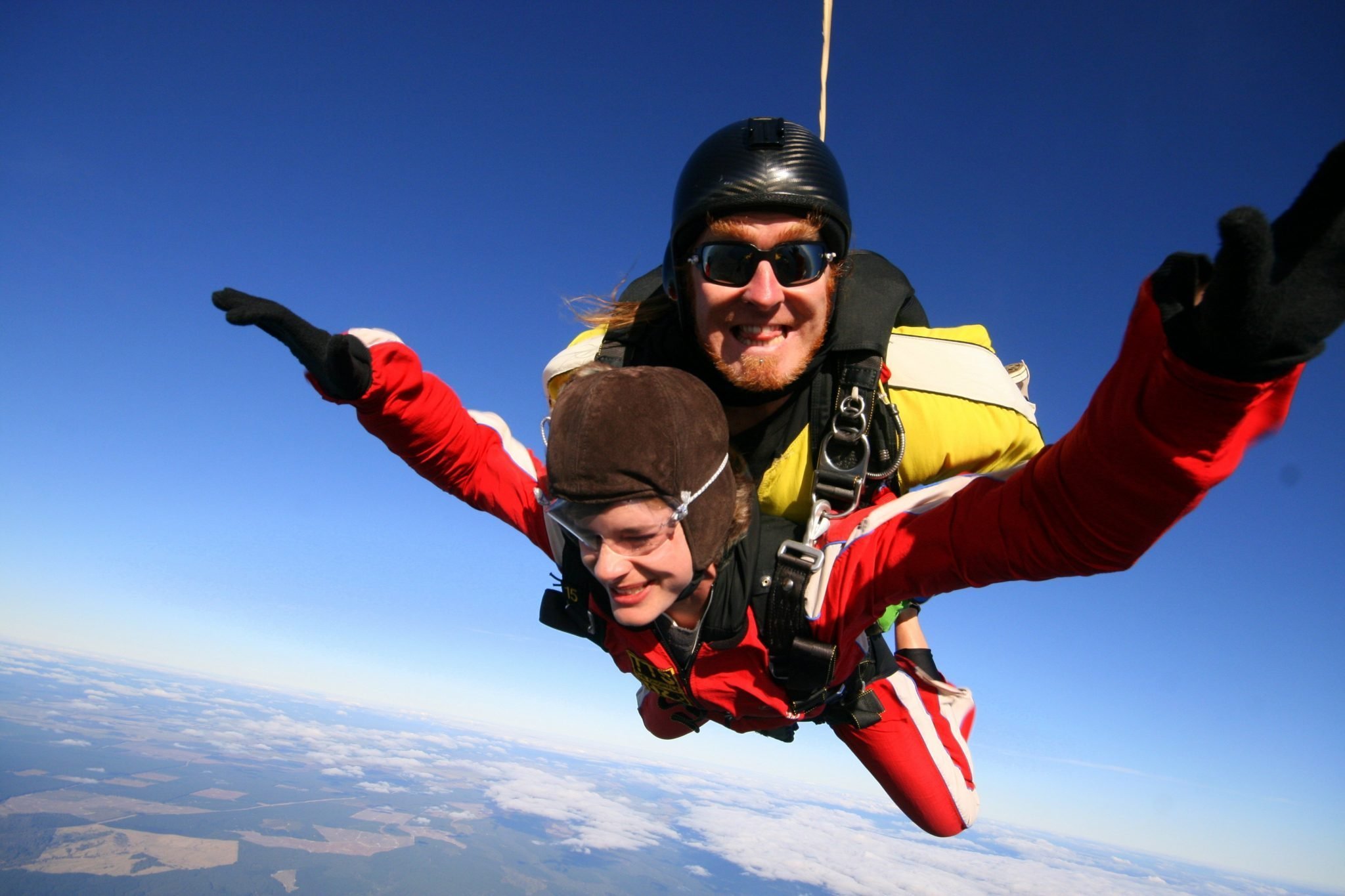 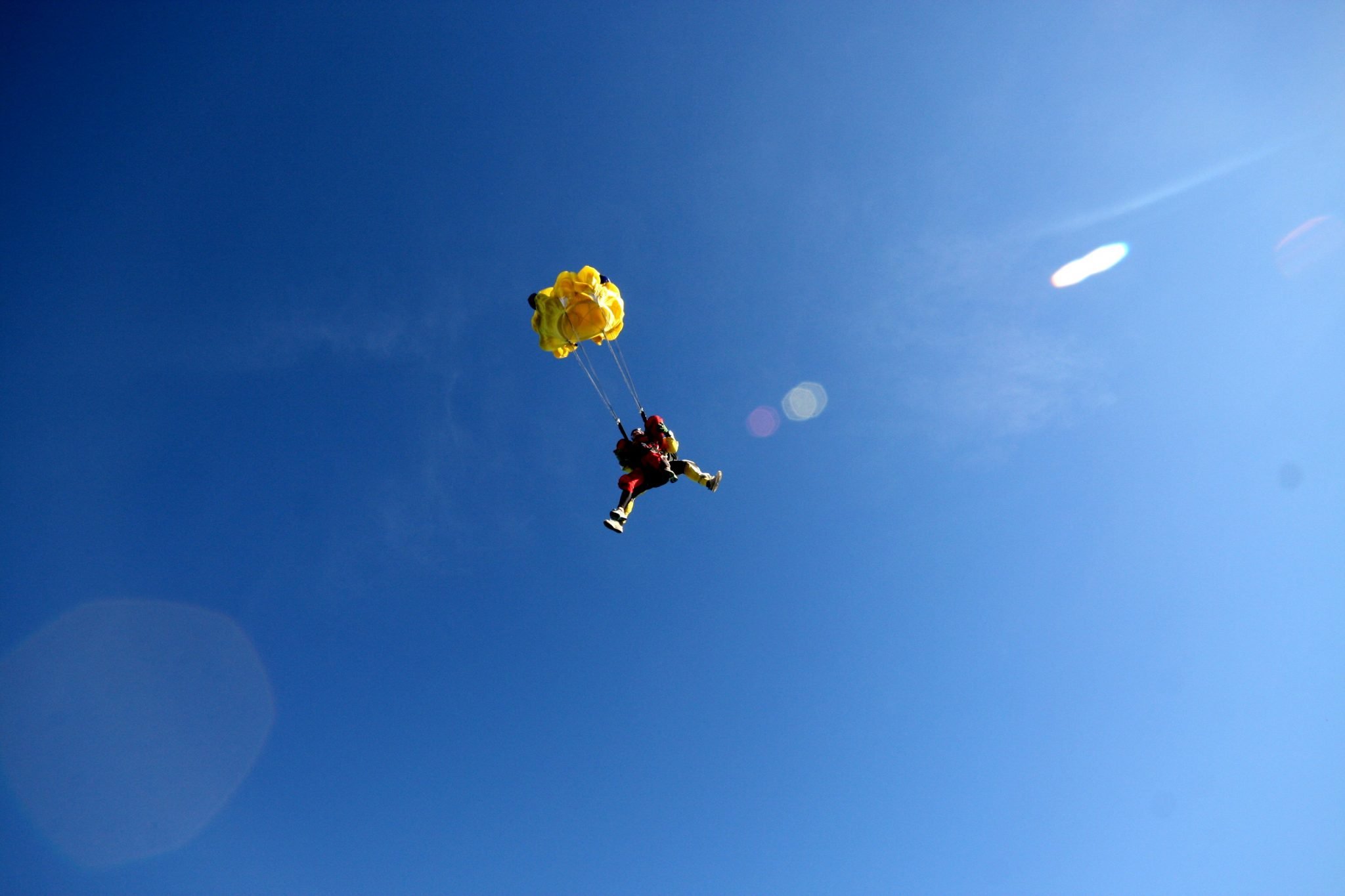 And then we were gliding down to Earth at an easy pace. It was the most surreal, magical, giddy, ethereal, and peaceful feeling once the canopy was up. I couldn’t stop giggling, the adrenaline slowly fading, and I felt irresistibly happy in that moment.

Ryan pointed out the volcanoes in the distance, the Tongariro Crossing which I had hiked the day before, and the general layout of Taupo.

He let me steer the parachute and told me to pull down hard on the right side, making us spin fast in the air and making me giddy all over again. We did that a few more times, and then just enjoyed the ride, down to the landing space. I couldn’t stop smiling.

The landing was easy and soft, and I suddenly had my legs back, I smiled and waved at the camera, still not believing I had actually just done that.

I was ecstatic the rest of the day and the good part of the next week for skydiving Taupo. I replayed the feeling of what it meant to fly and, most importantly, taking the jump and allowing myself to just let go and be free.

Related: 8 Things to do in Taupo for an Adventurous Weekend 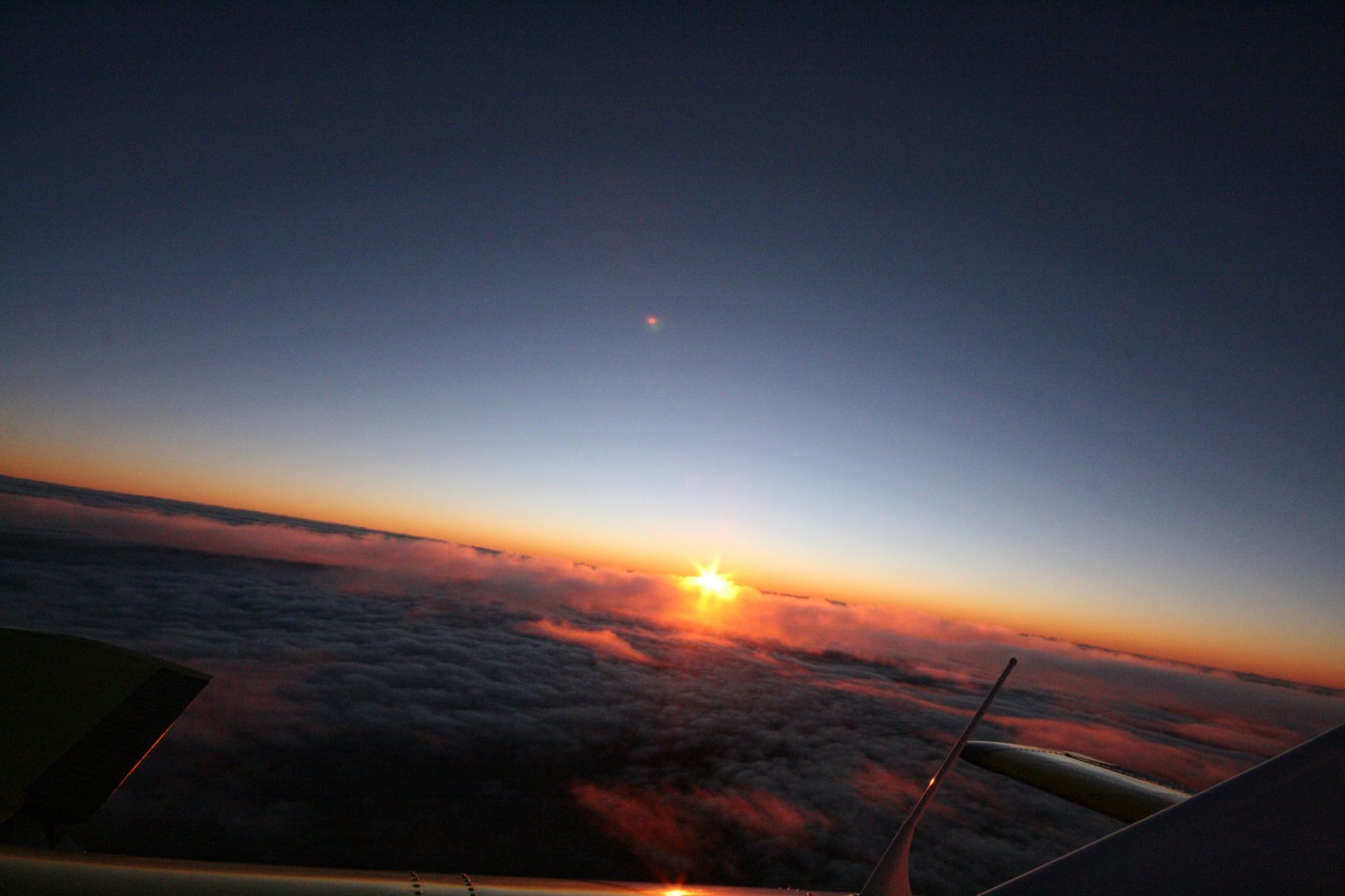 If you’re wondering what Ryan is jamming out to and singing during free fall video it’s Bohemian Rhapsody.

Except for a few, all photos in this post are courtesy of Taupo Tandem Skydiving.

Looking for more North Island travel inspiration? Check out these related posts below!

A Romantic Getaway to Gisborne

Why Auckland Surprised Me

The Best Things to do in Coromandel