6 Things to do in Boise, Idaho for a Weekend 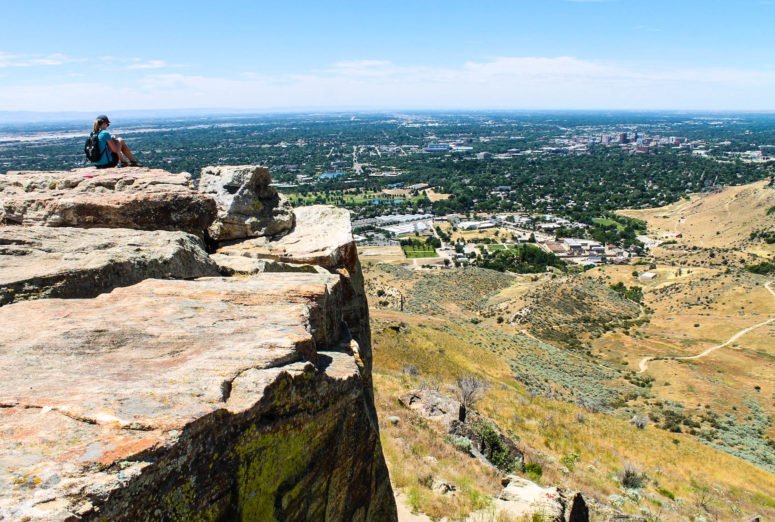 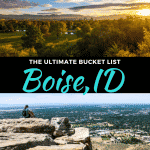 The best things to do in Boise, Idaho – from street art to the best bars, live music, hiking and more!

I had the pleasure of seeing a new state last month: Idaho! Surprisingly, I had never ventured into Rocky Mountain territory until this year. As I’ve traveled this area more, I’ve only become further impressed with the amount of natural beauty that lies in this region of the states.

I knew I wanted to go through Idaho at some point this summer while I was planning my road trip around North America. Boise was high on that list since my blogger friend, Brianne from Everyday Runaway, is from there originally and she had great things to say about it.

I by no means even scratched the surface with what could be done in this mountainous city, but this is a little guide to help you out if you only have a short amount of time in Boise.

Similar to a lot of the West Coast, Boise mentality is all about getting outdoors and being active. There are tons of options for hiking, mountain biking, river floating, and camping in the summer, and pretty much every type of winter activity on hand during the colder months.

I focused on hiking and discovered the Table Rock Cross Hike simply because I was told it has the best views of the city. You know me and good views! I ventured out on a hot and dusty day and found a pretty damn good view of Boise, and realized just how many trees there are around the city. 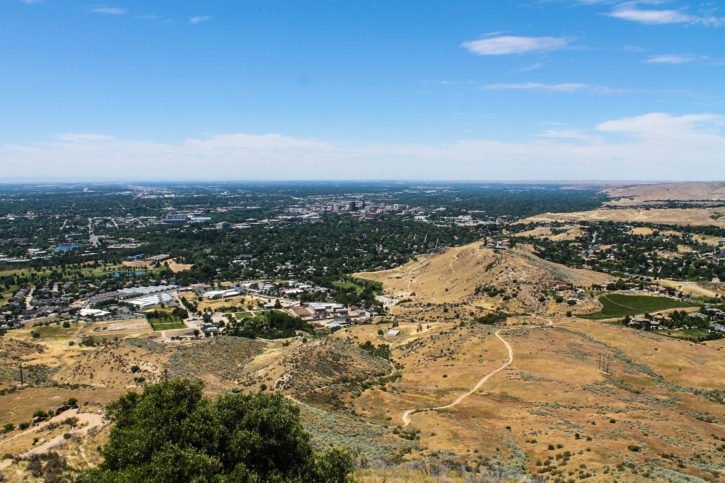 There’s a massive cross at the top of this hike as well, which has been surrounded by controversy in the past. Basically, the cross was built in 1956 by the Junior Chamber of Commerce and there have been numerous lawsuits since then arguing for the separation of church and state. 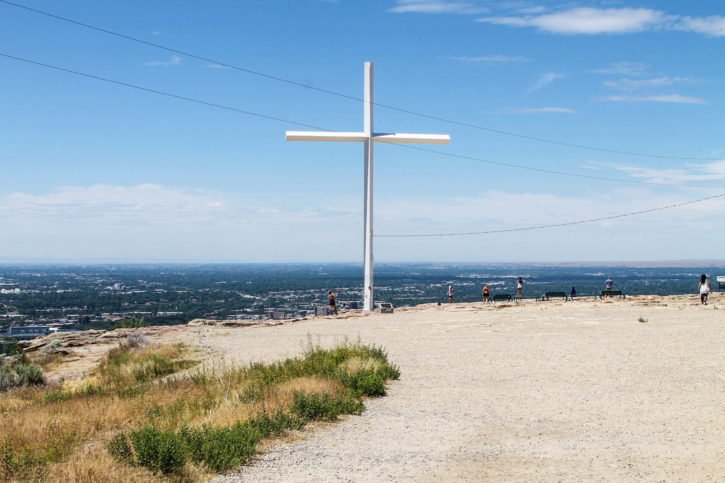 When I was up on the mountain that day, there was also a poignant sign in rememberance of the Orlando victims. I couldn’t think of a prettier and more peaceful place in the city to honor them. 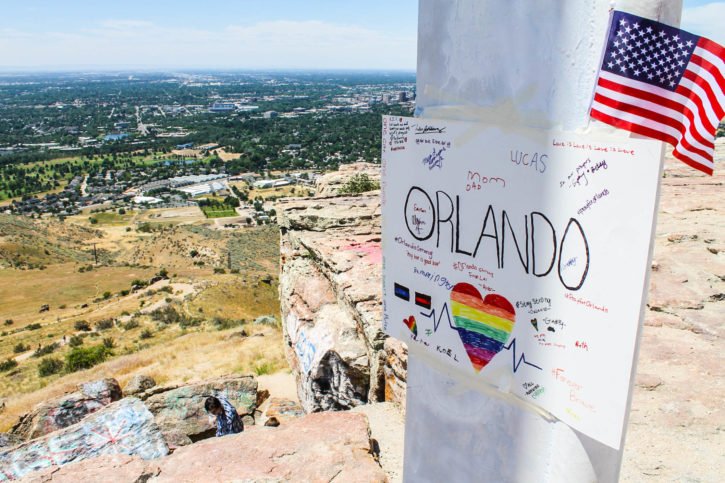 The Table Rock Cross Hike is just over 3 miles, so it’s the perfect one to do if you just want to spend an afternoon getting out in nature around Boise. If you have more time and want to spend a full day hiking, the Boise National Forest or the Bogus Basin came highly recommended.

I had no idea that Boise was known for its street art, but I soon became enamored with the colorful streets I found around downtown.

Apparently the street art and craft beer culture are relatively new aspects to the city. Some locals claim that Boise is trying to be more like Portland, while others say there’s simply an increase in younger people moving there. Still others give credit to big craft beer companies, such as 10 Barrel, who have moved into a relatively unknown craft beer scene to make it into the next big city for craft beer in the USA. 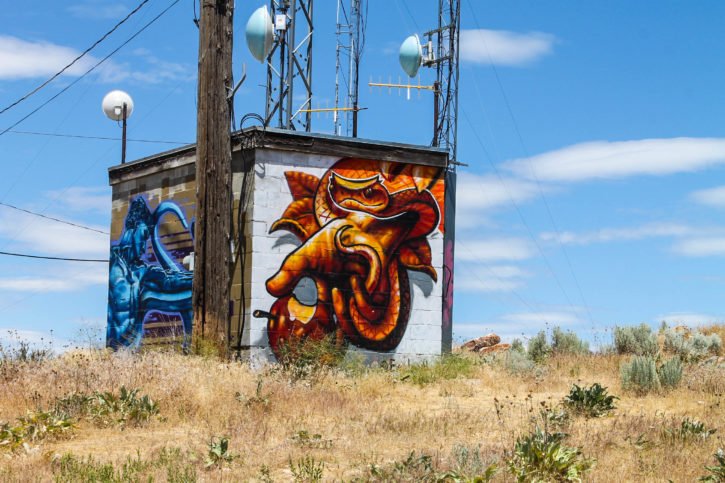 Whatever the reason, I felt at home in downtown Boise. And I could definitely see similarities between Boise and Portland, especially the Pearl District in Portland. Although perhaps not as political as the street art you’ll find in San Francisco, or as weird and funky as what you’ll find in Portland, the Boise streets can hold their own in terms of colorful creativity.

If you’re as much of a fan as street art as me, spend an afternoon getting lost down alleyways and streets in downtown Boise.

Taste Your Way Around the City through Craft Beer

Speaking of craft beer, Boise is starting to have quite the scene these days. As I mentioned before, 10 Barrel has moved into the city now and most people are excited to welcome a new and bustling craft beer scene in Boise.

Payette Brewing Company seemed to be the most popular choice by a lot of locals. I had a chance to try their pale ale and thought it refreshingly balanced and not overly hoppy.

Other breweries to check out while you’re in town would be Woodland Empire, Boise Brewing, Cloud 9, Edge, Highlands Hollow, and Sockeye. With that said, the breweries are not particularly close to each other in one area of the city, so I would recommend making sure you have a designated driver or access to Uber.

In addition, there are quite a few tap rooms that will give you a good selection of Boise specific and Pacific Norhwest/California beers. I stopped in at the Pre Funk Beer Bar and Taphouse and found both of their selections to be spot on.

There are a lot of nice places to go out to eat around this neighborhood, as well as a bunch of local shops, ice cream parlors, and old school candy stores. Since many of the restaurants have open air or patio seating, I also found it to be the perfect place to people watch.

Hyde Park would be a great place to grab dinner and Camels Back Reserve is right next door as well, if you haven’t had your fill of hiking in beautiful locales yet.

I love seeing capitol buildings when I’m in a state capital, they’re always so ornate and I can feel the history emanating off of them. I’ve been inside both the Sacramento and Austin state capitol buildings, and although I didn’t get a chance to go inside the Boise capitol, it was a still a very cool building to walk around.

The building was completed in 1920 and it stands as an attractive historic fixture right in the middle of downtown. There’s a park right in front of the capitol as well that would be an ideal place for a picnic on a nice day. While I was in town, there was a festival of sorts going on in the park with live music, magicians, and booths from local businesses around town.

Spend an Afternoon in Bogus Basin

When I first drove past the sign for Bogus Basin, I had to laugh. Who would want to go to “bogus” basin?! As I started talking to locals about what to do, however, Bogus Basin kept coming up in conversations. It’s a popular spot for locals to go snowboarding in the winter and hiking, camping, and mountain biking in the summer.

There’s also free music, called Music on the Mountain, hosted by 10 Barrel Brewing (win-win!) throughout the summer months at Bogus Basin, from July to September.

I easily enjoyed my short time in Boise. The city seems to have changed a lot in the past few years, according to locals, but its small town nature is still very much apparent when you walk through the city streets.

Most locals we met seemed incredibly happy and friendly, there’s a focus on art and the outdoors, and the foodie and craft beer cultures are only just getting started. Not to mention, it’s one of the cheapest big cities to live in America right now.

A still hidden gem nestled in the mountains of Idaho and just a short distance away from the Rockies, Boise is a place I look forward to heading back to for a longer visit someday!

Have you been to Boise, Idaho before? Has there ever been a city that really surprised you? 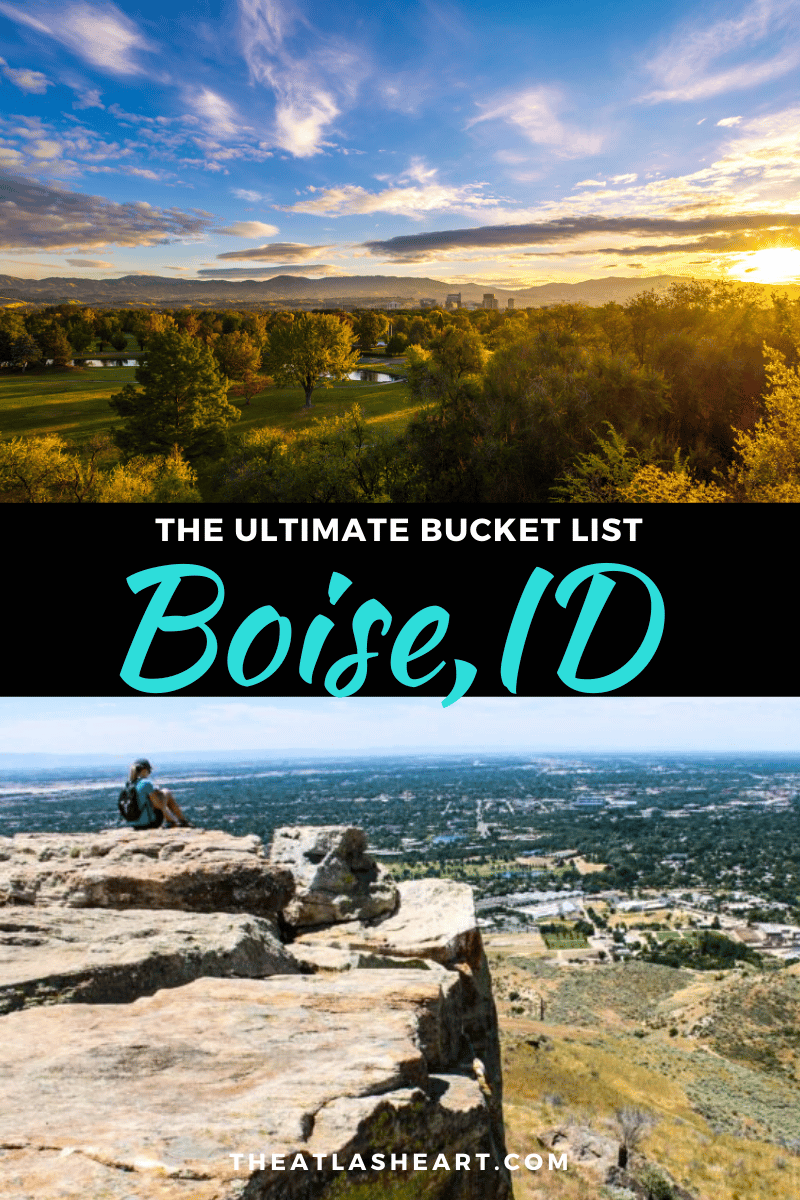 15 thoughts on “6 Things to do in Boise, Idaho for a Weekend”