We are infinite: living it up at the Full Moon Party 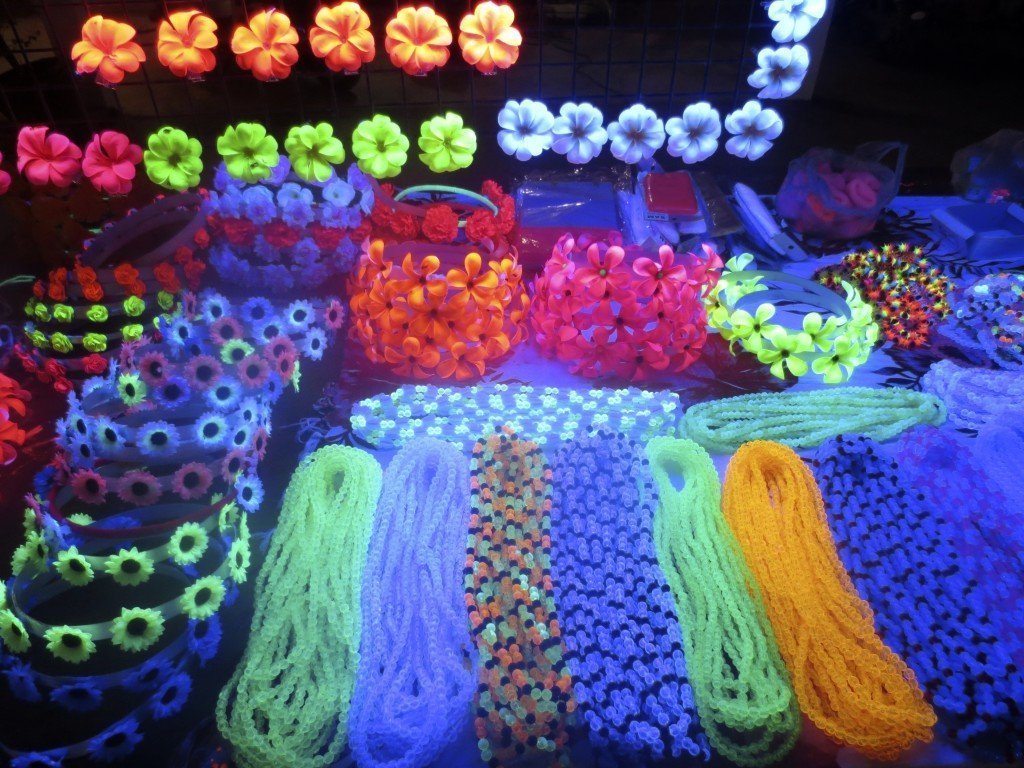 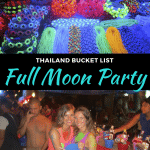 I woke up with a mischievous feeling in the pit of my stomach. Today was the day of one of the best parties for a backpacker to attend, the Full Moon Party on Koh Phangan island in Thailand. I had been looking forward to this hedonistic rite of passage since I first started planning my travels in Southeast Asia, and I couldn’t wait to experience it full on. 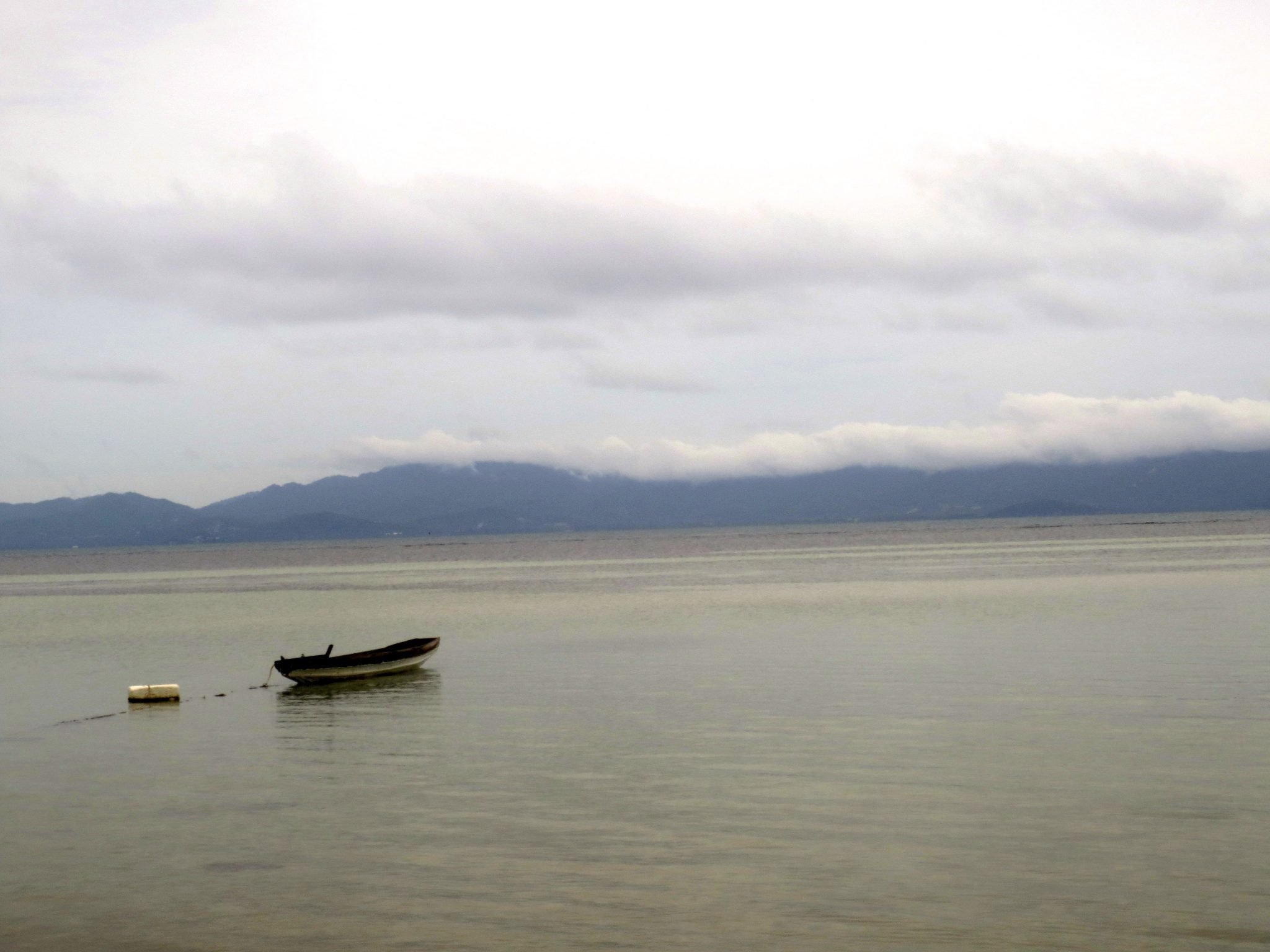 We brought as little with us as possible and hopped on the ferry from Koh Tao that afternoon. Once we arrived at Koh Phangan about an hour later, we attempted to walk to Haad Rin Beach, the location of the party, until we realized just how big of an island Koh Phangan is. We split a taxi with a surfer/diver Swedish guy we came across on the path, and were dropped into party central before nightfall. 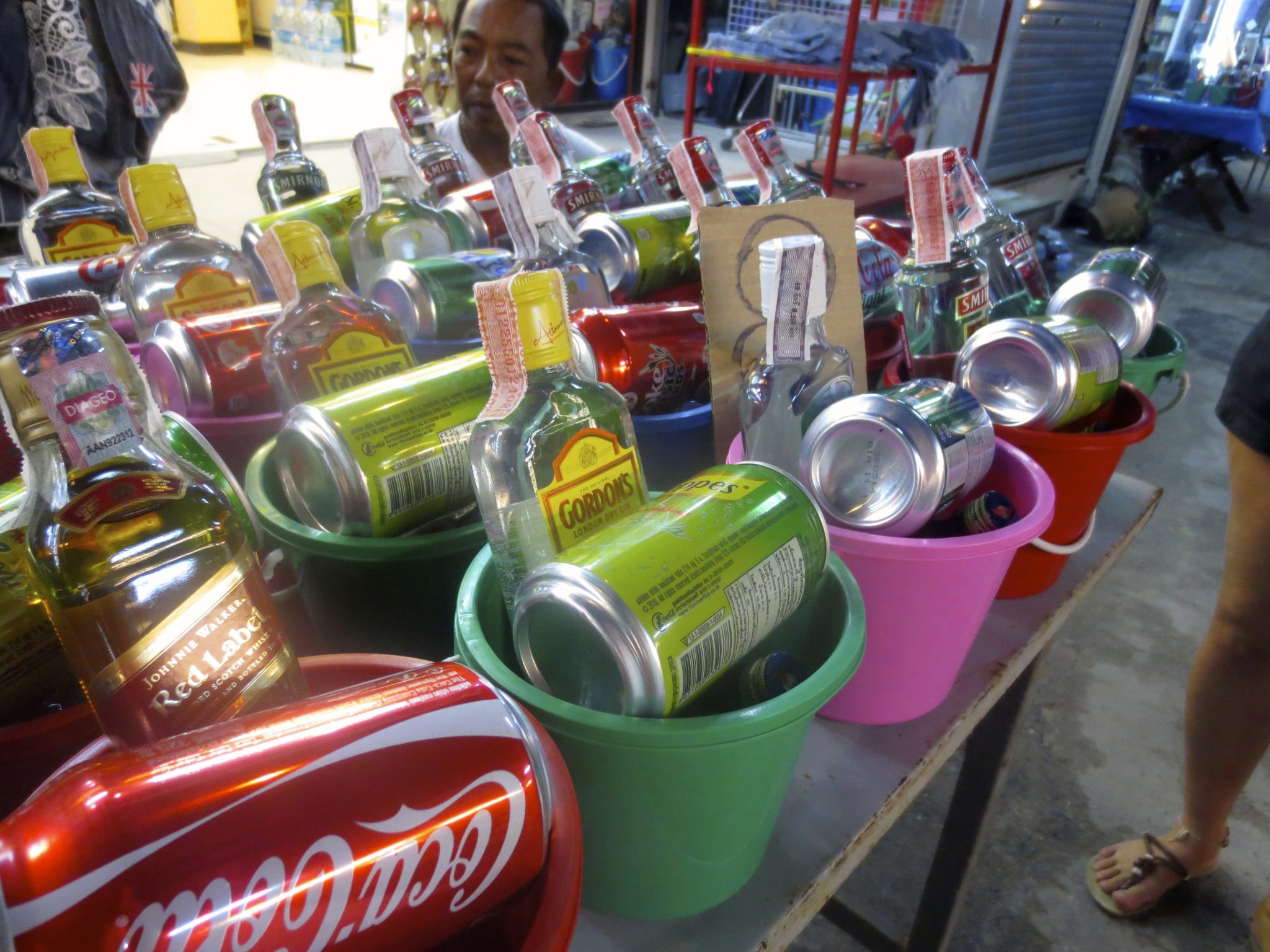 There was neon everywhere, I was in heaven as I like shiny and brightly colored things. I like to claim that it’s due to my sunny California girl disposition. In fact, if you look inside my wardrobe it is a rainbow of every imaginable color…but I digress. 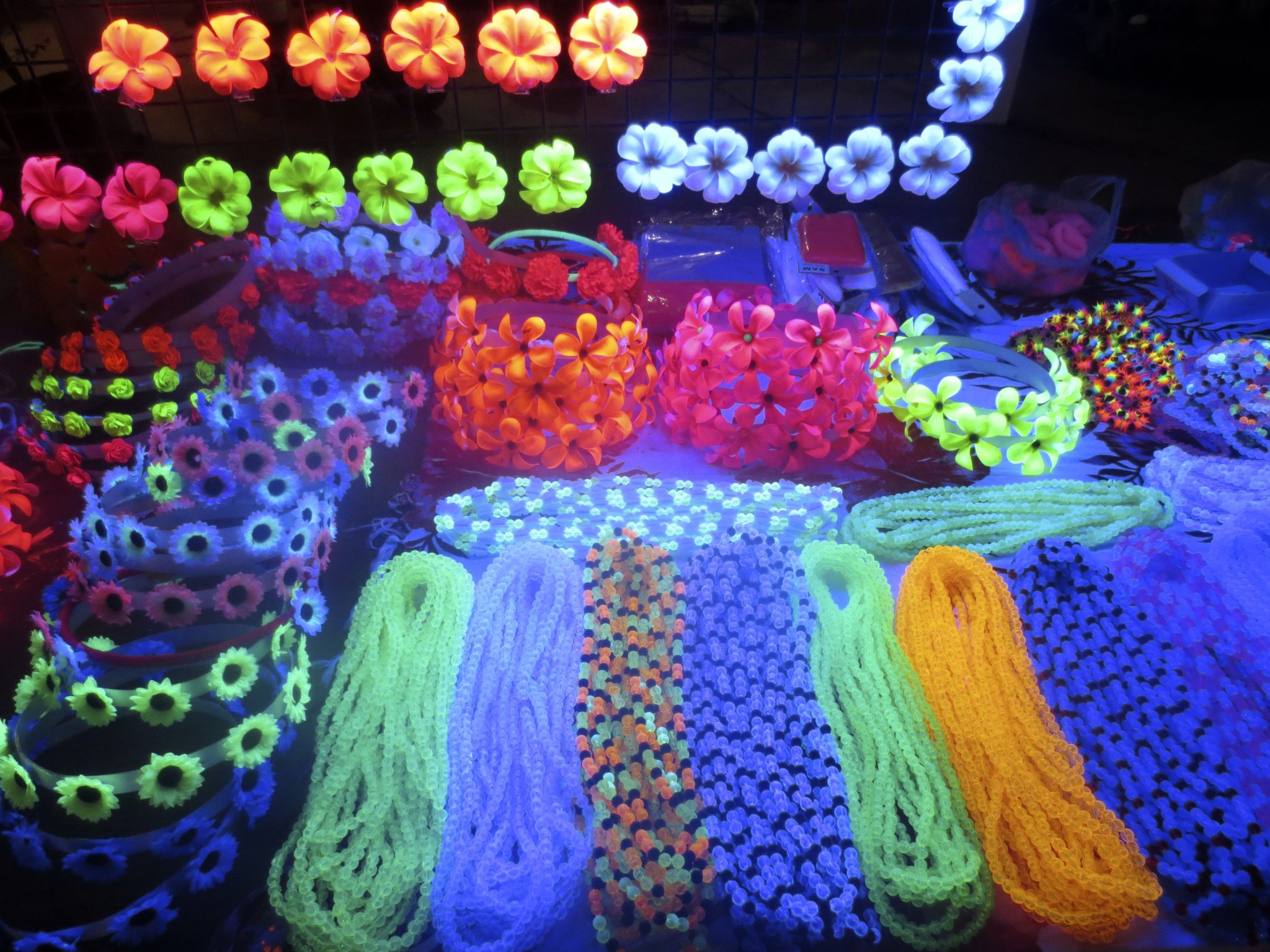 Needless to say, the Full Moon Party was my kind of party. Hippie backpackers everywhere with paint splattered on their bodies, huge fire jump ropes and fire slides for partygoers to test their luck with, every imaginable greasy food lining the sidewalks, buckets of alcohol with your choice of mixer, neon clothing, a beautiful location. 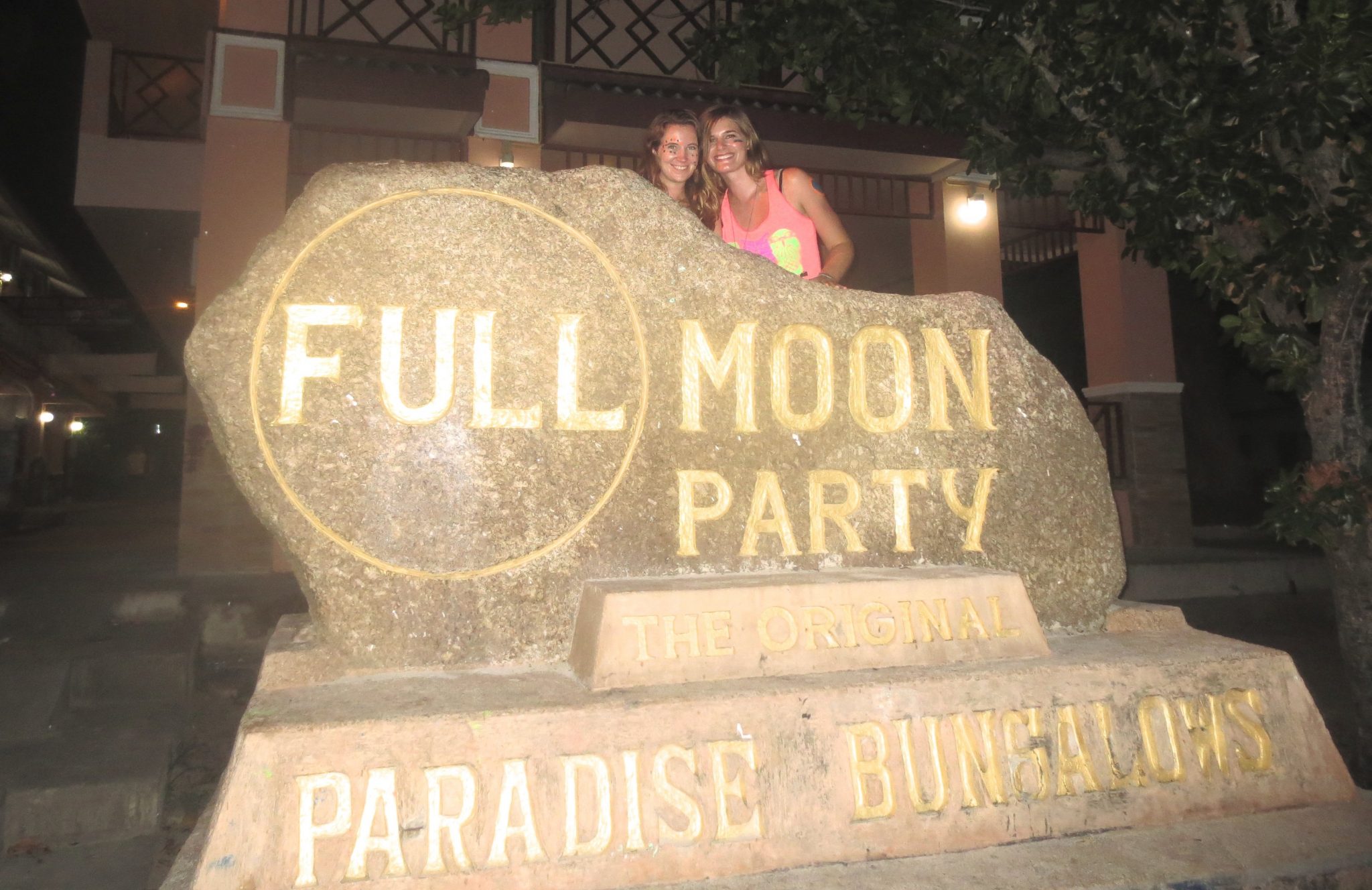 No judgements, no questions, everyone there for the sole purpose of having the best night possible, I call it “that festival feeling”. It was a night I’ll not soon forget, from the people we met along the way, to the variety of music, to that feeling of being infinite with the full moon looking down on us on that beautiful Thai island, with the sand between our toes and a bucket in each hand singing along to our favorite songs of twenty-something year olds. 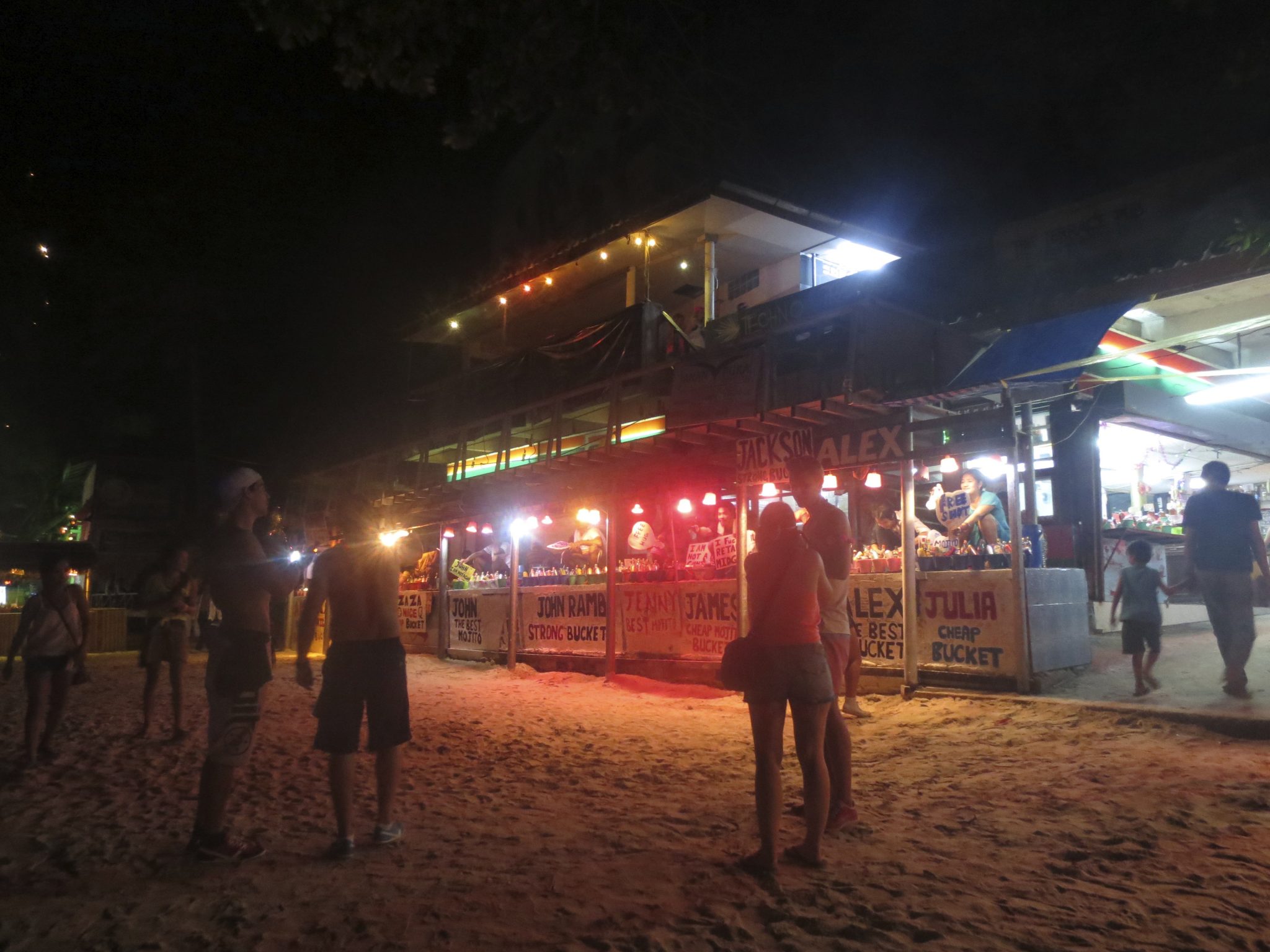 The following are my tips for having the best night possible under the Full Moon, and let me just say, it’s worth the slightly exploitive prices, copious amounts of DayGlo, and neon to experience this party firsthand at least once in your lifetime.

I would recommend getting down to the islands at least a couple days before the party, especially if you go during high season and you’re staying on another island other than Koh Phangan, because accommodation and ferry tickets sell out fast. We came all the way from Bangkok on the night bus and it was a very long trip and extremely early ferry ride.

The good news is that the transportation in Thailand is some of the best in Southeast Asia, so there are plenty of options for how to get down to the southern islands from Bangkok. 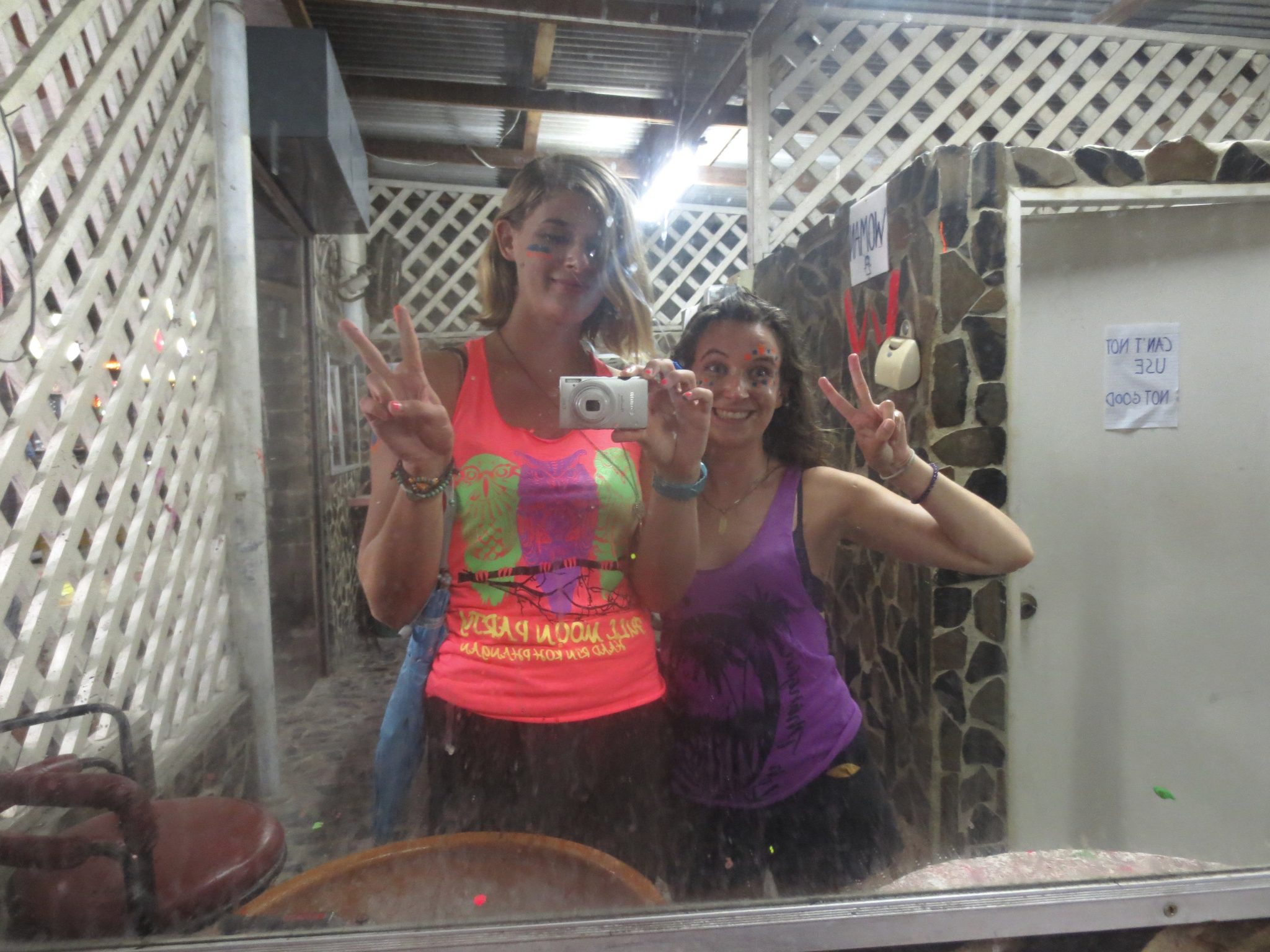 One thing to note is that the night buses to and from the island are notorious for having thieves on them. Laura and I both had our money stolen on the way down, and on the way up I caught a thief in action stealing from my neighboring bus mate.

Watch your things like a hawk, and get down a system to keep everything of value very close to you while you’re trying to sleep.

We decided to stay on the neighboring island of Koh Tao, mainly because we heard that accommodation would be more expensive on the party island, there are usually more break-ins when people are at the party, and it’s nicer to have a quiet place to go back to and recover from the festivities. 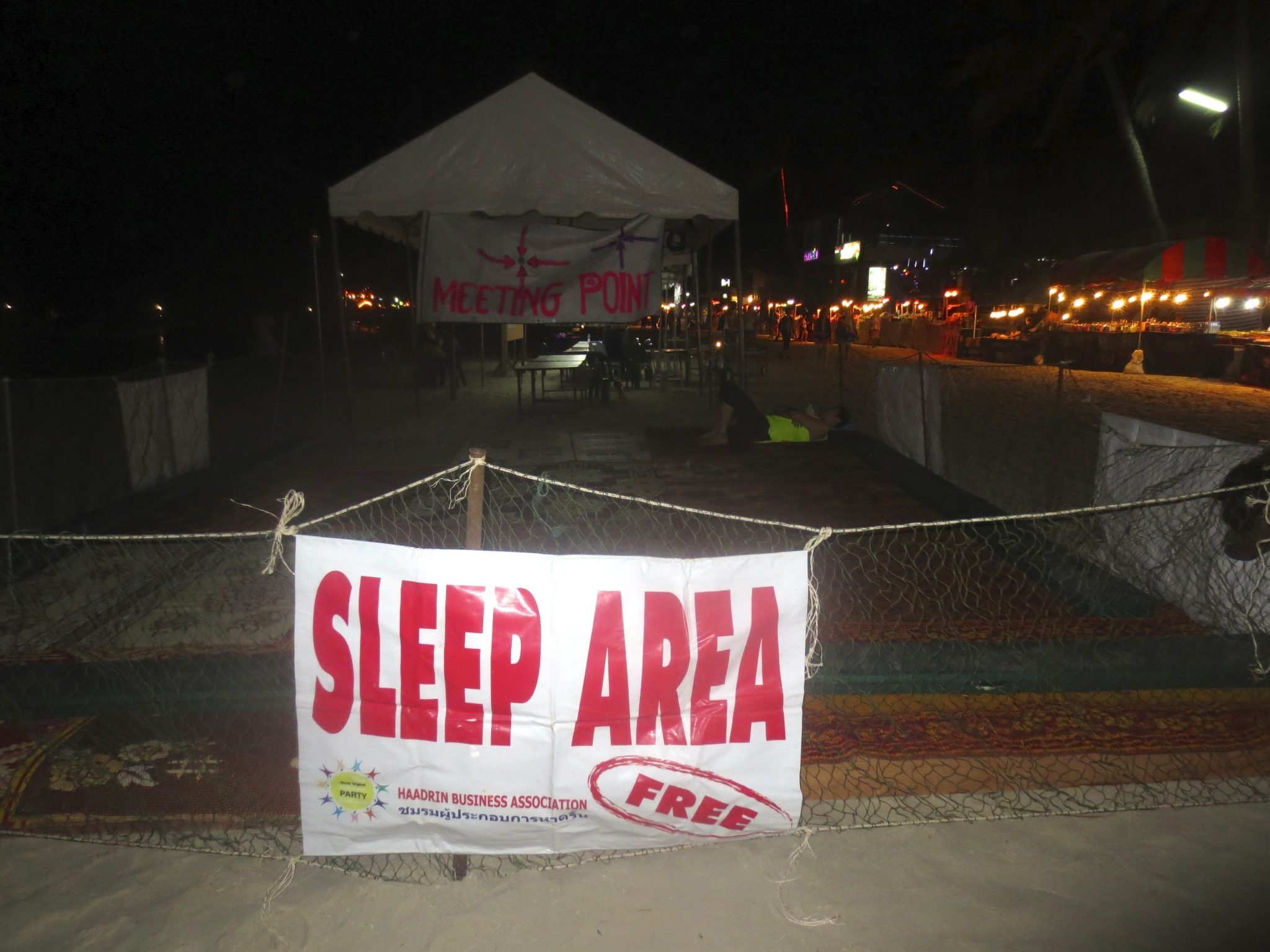 I actually wish that we had just stayed on Koh Phangan at one of the Full Moon party hostels, even just for the convenience.

In terms of saving money, it would’ve been about the same anyway because of the jacked up ferry prices during the week of the full moon. And due to our lack of time, we had to pull a Cinderella and leave behind the Irish guys we were still partying with at 7am, and whom we had hung out with for most of the night, in order to catch our pre-booked ferry at the dock. Luckily, we were able to meet up with them again a week later in Chiang Mai before we left for Vietnam. 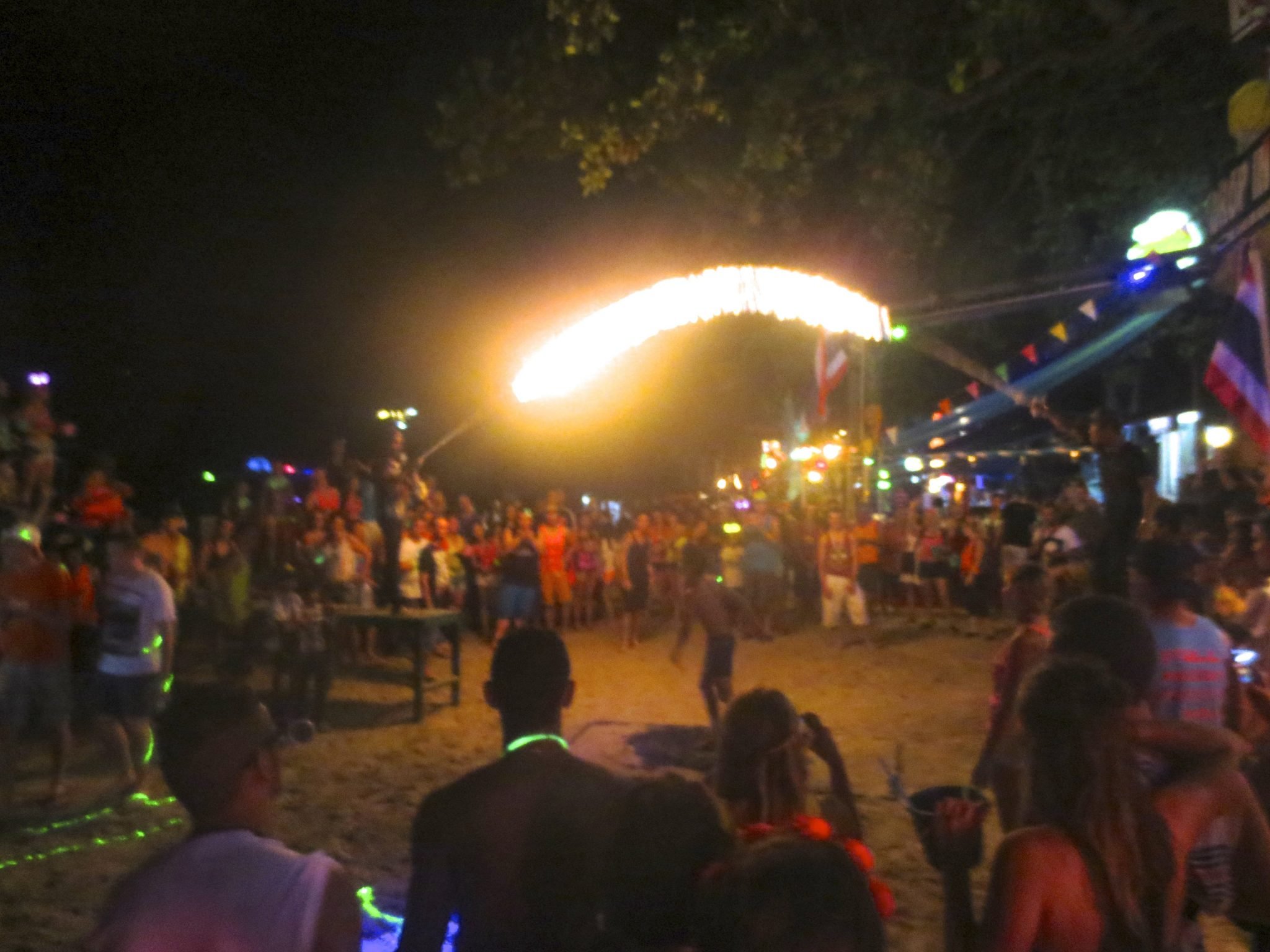 With that said, I don’t regret staying on Koh Tao, because it was a lovely smaller island to explore that was gorgeous in its own right, and we probably wouldn’t have had time to see it if we had just gone straight to the party island.

Bring as little as possible. I almost didn’t bring my camera for fear of it getting lost or dropped, and although it still has DayGlo stains on it, I don’t regret for a second capturing the madness of the Full Moon Party. Other than that, everything I brought could all fit into my clothes: money, tissue for byo toilet paper, ferry ticket, two tiny jars of DayGlo paint, and that was it. 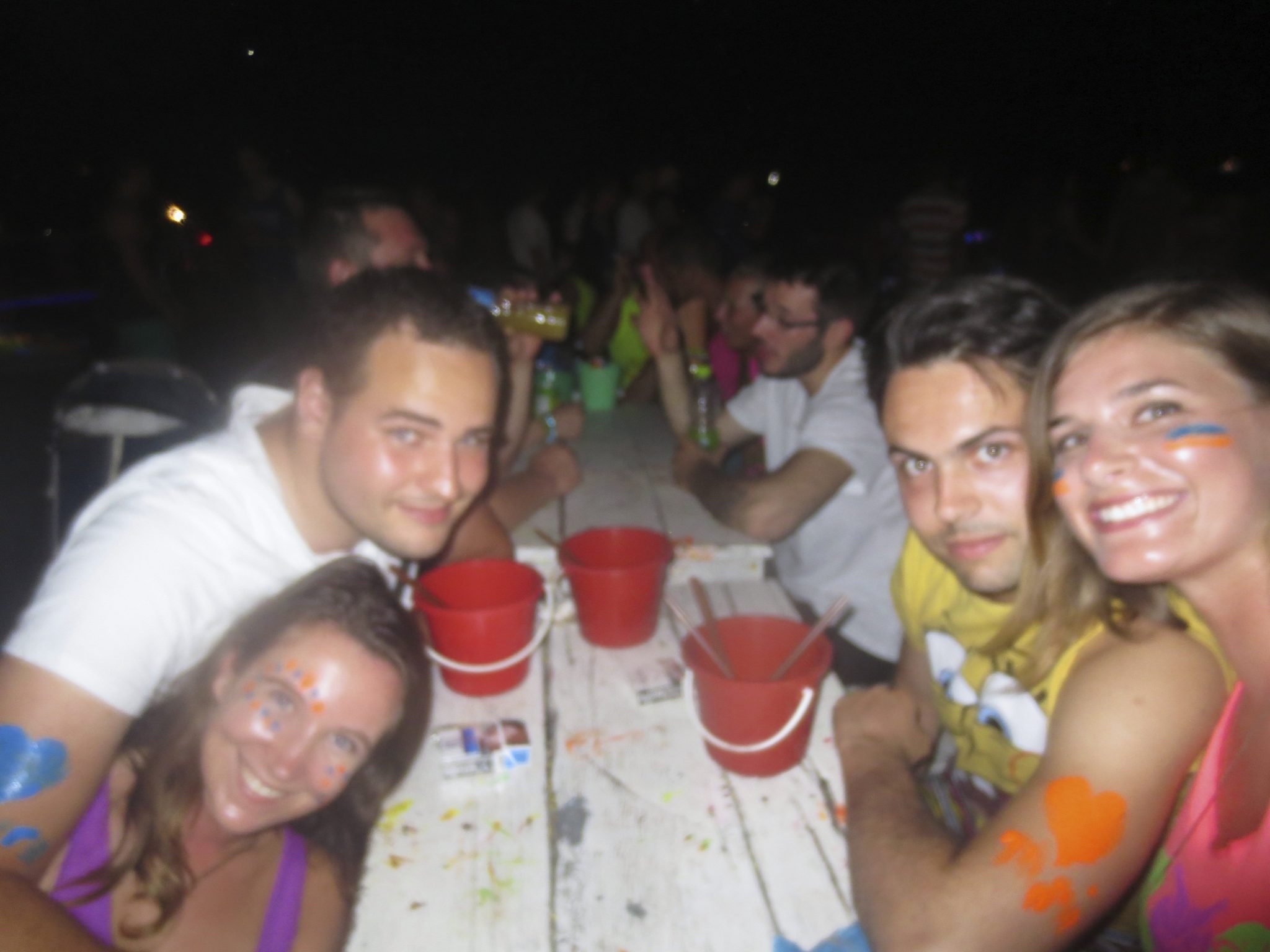 The Full Moon Party gets a bad rap because it has been known as a place where girls easily get drugged, date raped, and taken advantage of. On top of that, there are always going to be drunk people doing stupid things at these types of events, and especially when you have fire batons and jump ropes around it can get out of hand quick, but I never once feared for my safety. 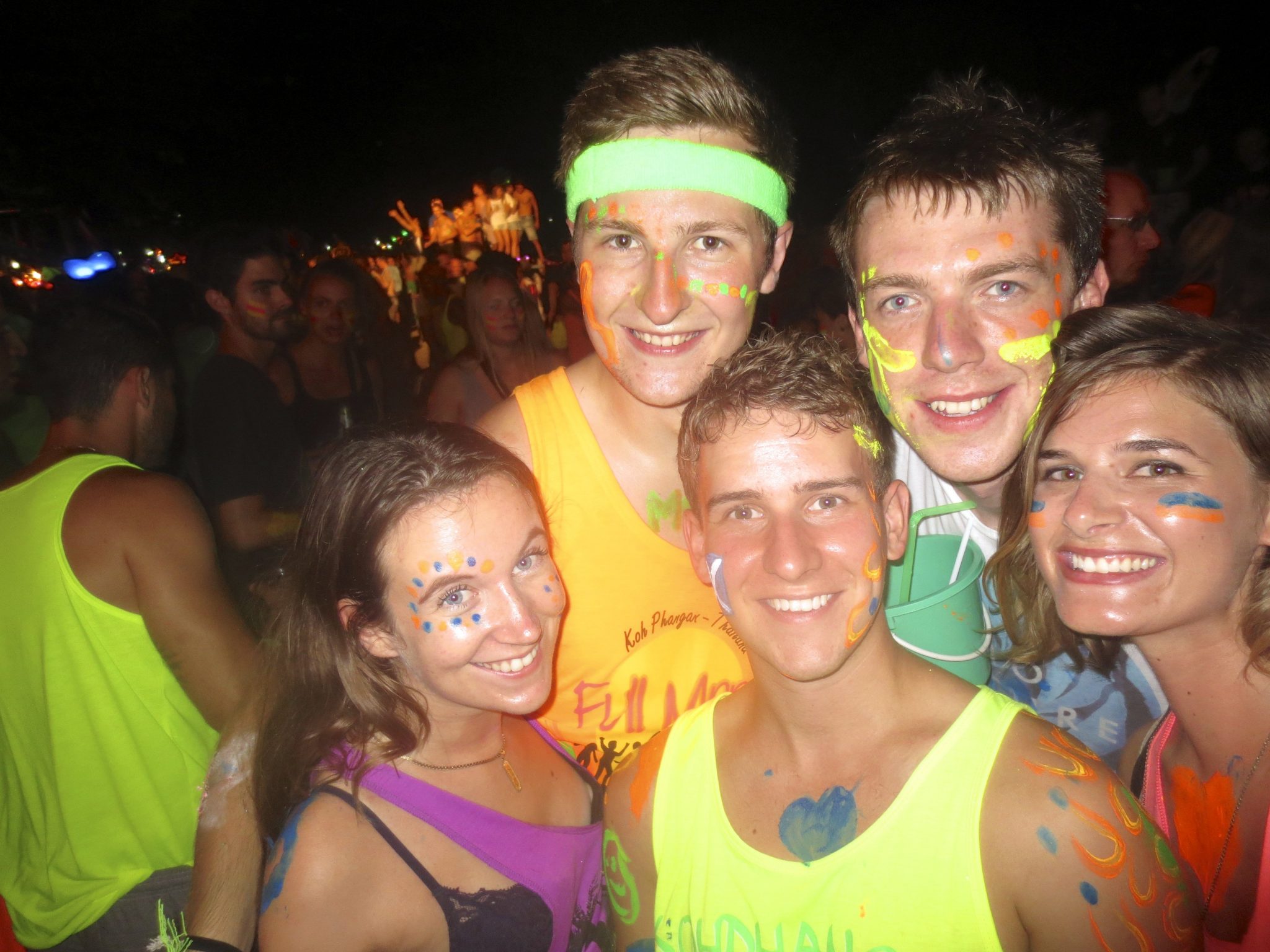 To be fair, I don’t think I would’ve gone to the Full Moon Party by myself, but even with someone else with me, it just takes a bit of common sense, and my general rule when I’m abroad, or even when I’m at home, of not getting so drunk that I can’t take care of myself. It only leads to a bad time.

My general rules are the standard ones: to always keep an eye on your drink, use your good judgement if you’re going off somewhere with a stranger, and don’t get yourself into any situation that you can’t get yourself out of. Not only did I not have one bad experience at the Full Moon Party, but I also had the most fun out of all of my Asian nights.

There’s no way to get around it, the Full Moon Party is expensive. The islands and the people putting it on will extort as much money from you as possible because it is the biggest party in Southeast Asia. Between the ferry tickets to and from, the drinks, food, DayGlo paint, and Full Moon tank top, it came out to be one of the most expensive experiences I had in Asia. Budget accordingly and expect for everything to cost money, even using the toilet.

They’ve also started charging for “tickets” onto the beach after a certain time (generally after dark), but Laura and I were somehow able to find ways in that avoided the ticket takers. 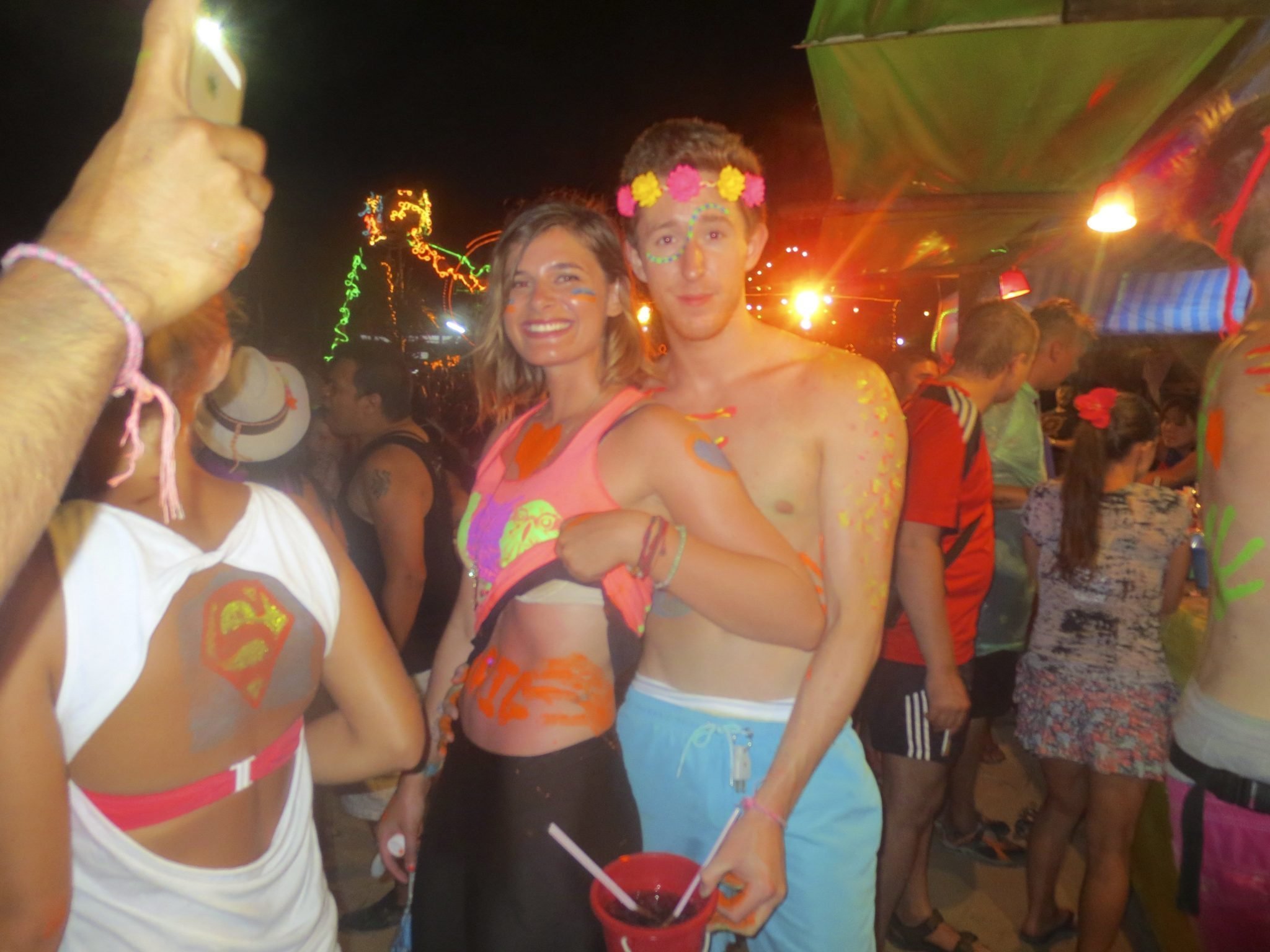 Lastly, don’t forget to have fun and to lose yourself in the festivities. It is one crazy neon glow ride that is worth experiencing, and it is one of those times in life that you’ll remember as the epitome of what it means to be young and free. Don’t lose that feeling. 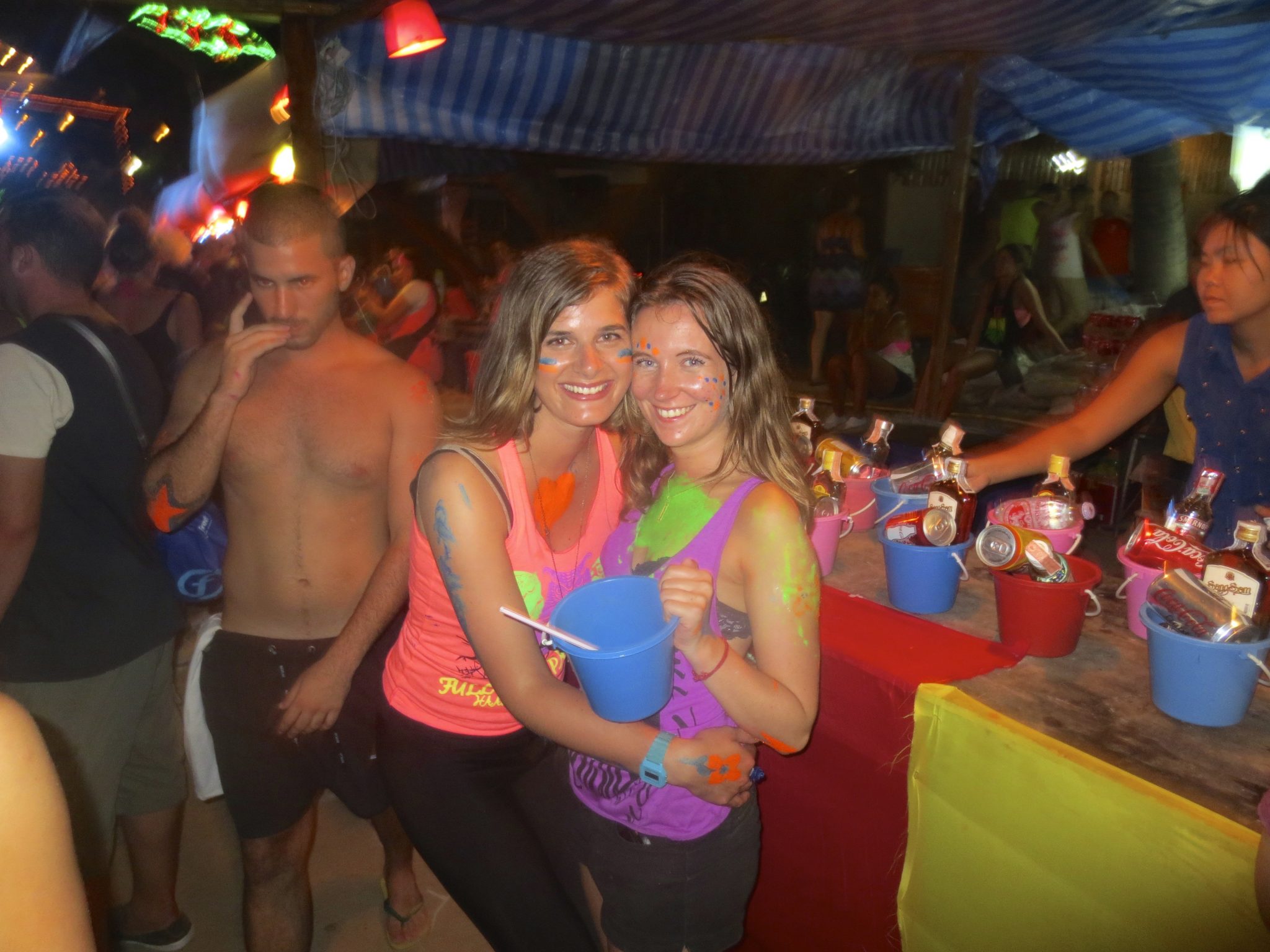