Angkor What? Exploring the Angkor temples in Cambodia 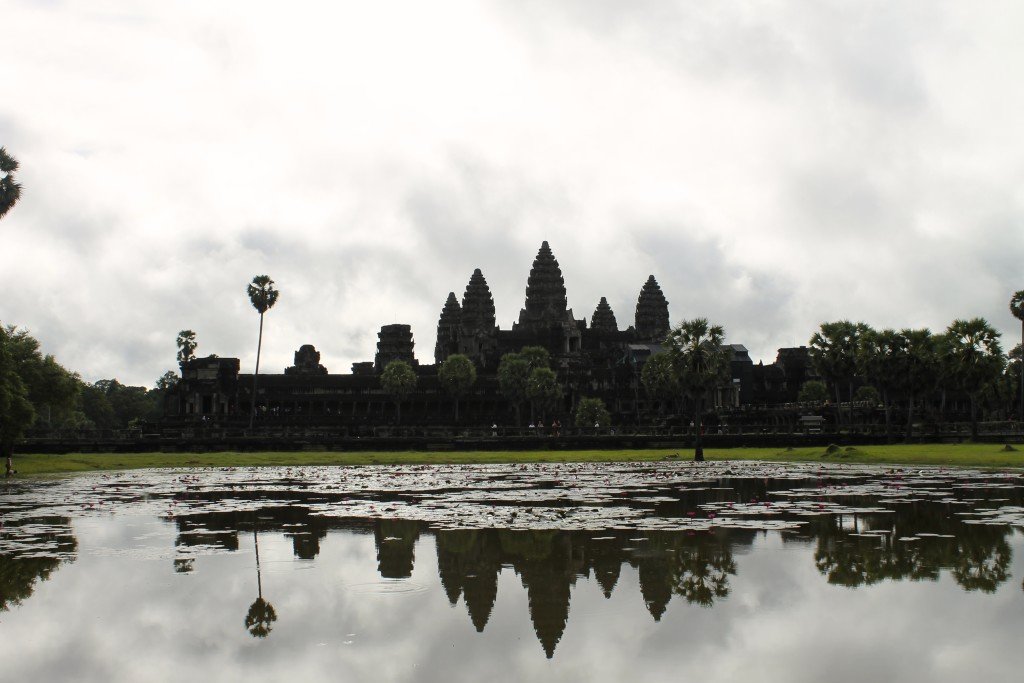 Most people have heard of the Angkor temples either from the history books or perhaps from Tomb Raider, but unless you’ve seen the temples yourself, nothing can prepare you for the Khmer genius and intricate aesthetic details that you’ll find at the Angkor temples.

Located about 4 miles north of Siem Reap, the Angkor temples are the top attraction to see in Cambodia, and one that I had been looking forward to seeing ever since I started planning my travels around Asia.

Whether you’re spending just one day or ten days in Cambodia, Angkor Wat is the number one experience to have in the country. 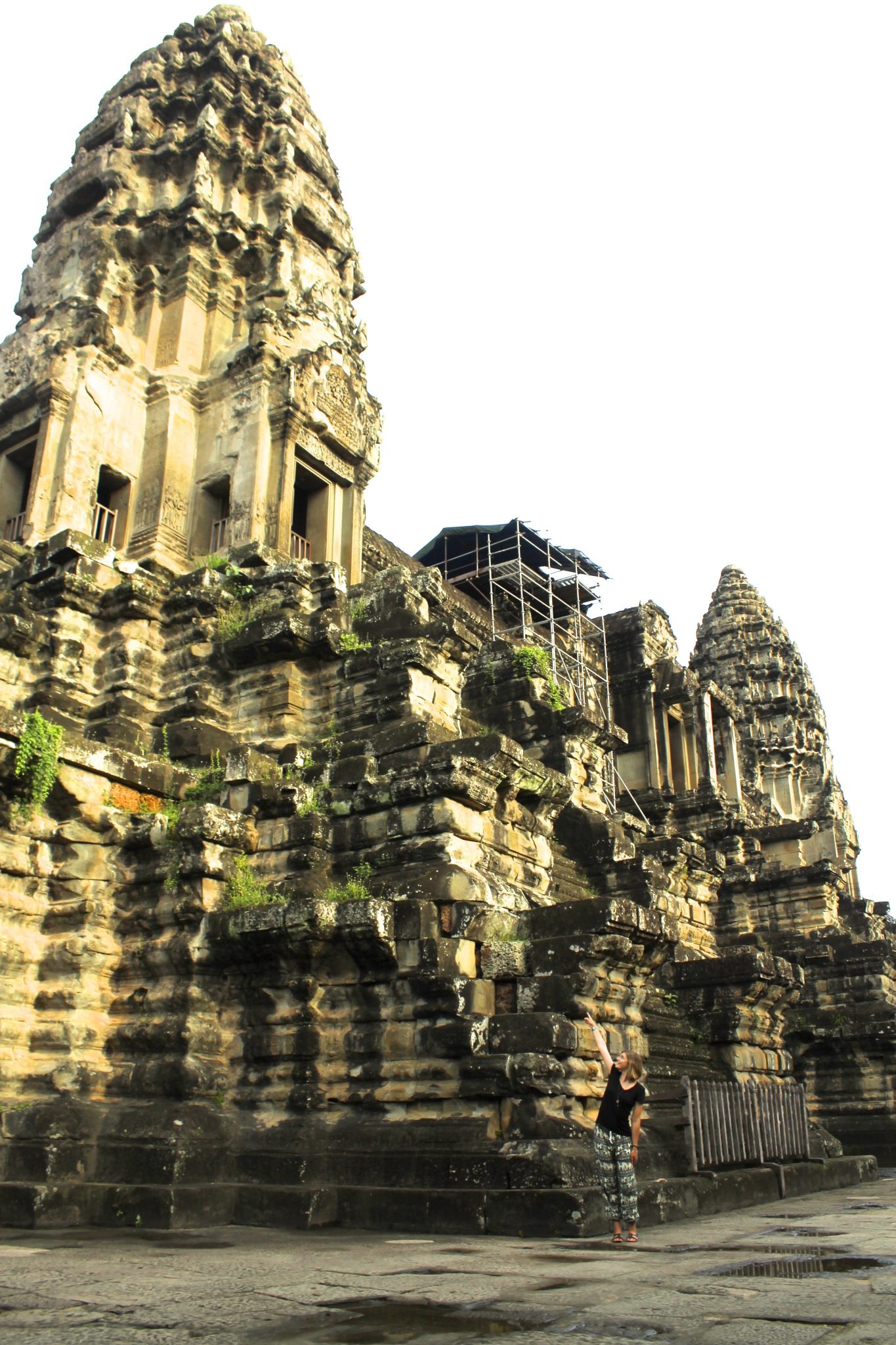 We opted for the most popular time, visiting Angkor Wat at sunrise and watching the sun come up behind the iconic pillars. It was still dark when we set out for the Angkor temples on our tuk tuk ($15 total for 2 people), we made one stop before the temples to pick up our ID pass for the day. They they took our picture (at 5 in the morning, yikes!), and we were able to buy either a 1 day, 3 day, or 1 week pass. We bought the 1 day pass for $20 and continued on our way to our first stop, Angkor Wat. 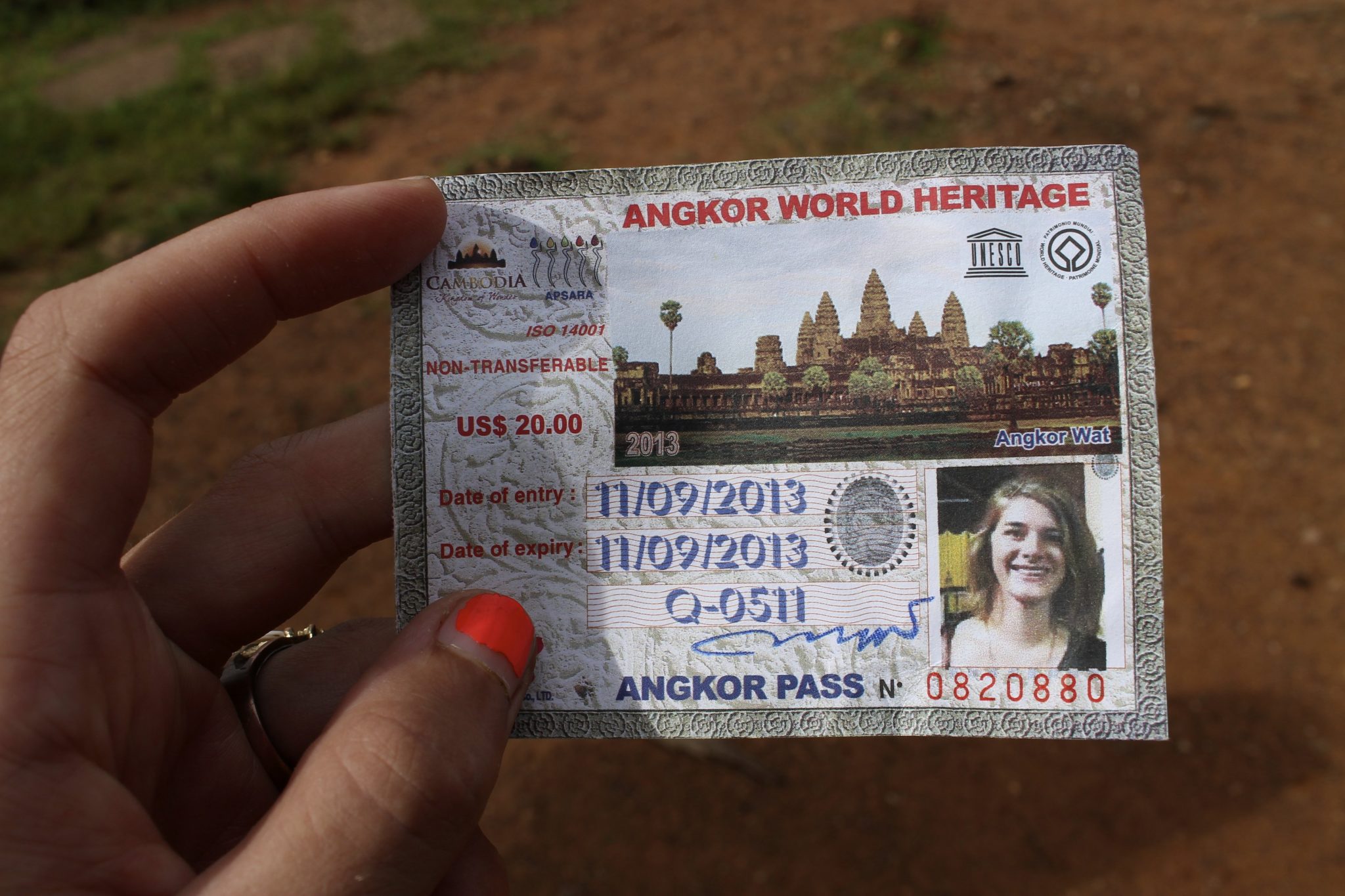 As we were walking towards the temple, there were tons of hawkers and food stall owners that walked with us and told us to come to their stall after sunrise for breakfast. They all had catchy names like Lady Gaga, David Beckham, or our personal favorite, 007. There was already a crowd of people surrounding the pond in front of the temple, but we somehow found a spot with a clear view, and waited for the sunrise. 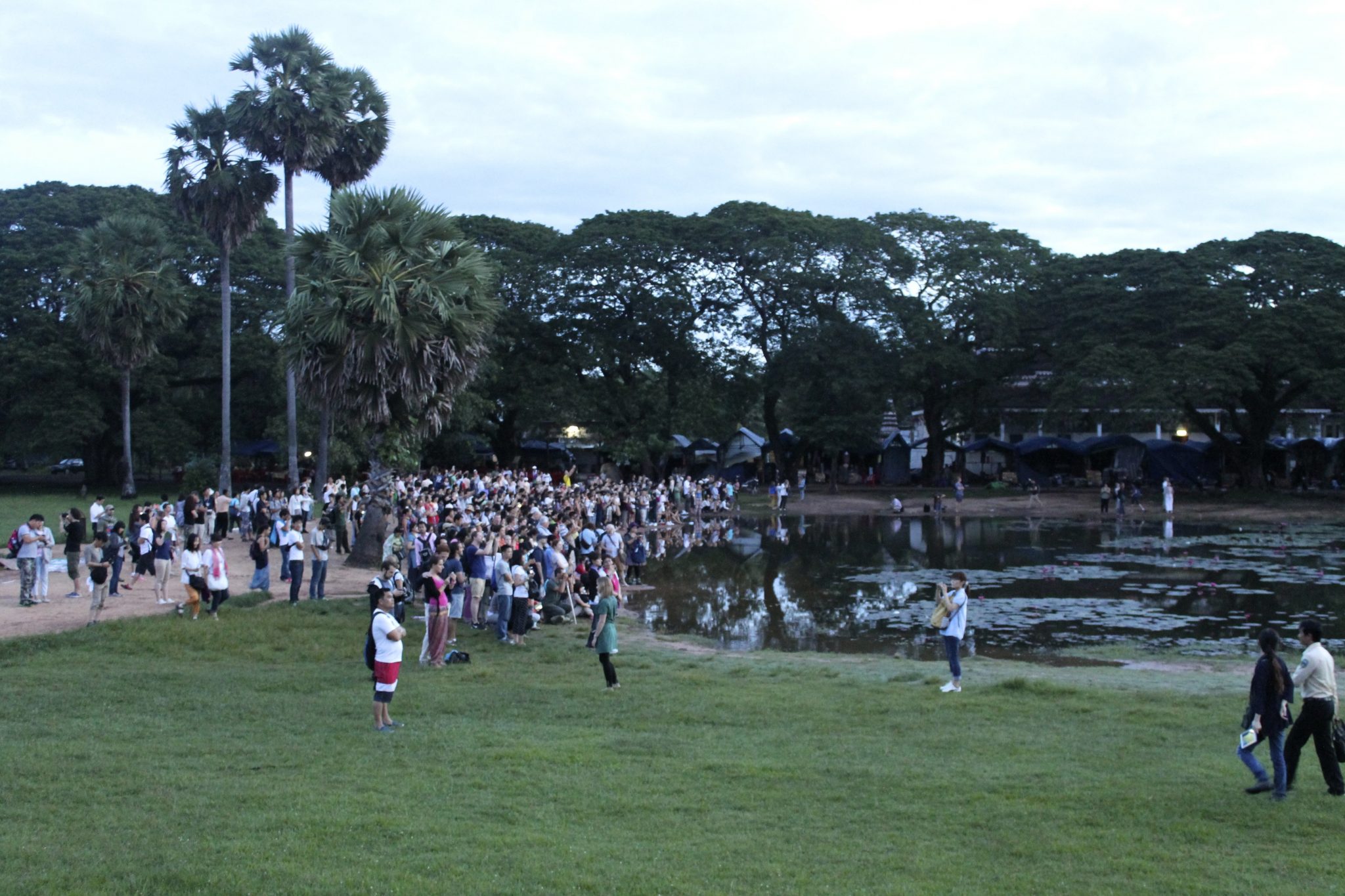 Angkor Wat, built in the 12th century by King Suryavarman II, is thought to be the largest religious structure in the world. Originally a Hindu temple honoring the God Vishnu, it became a Buddhist temple in the 16th century after the capital moved to Phnom Penh and it was then cared for by Buddhist monks. “Wat” translates to “temple”, so it’s literally the Angkor Temple, the mother of all temples. It took 30-35 years to build, and it is truly a testament to human intellect, strength, and ingenuity. 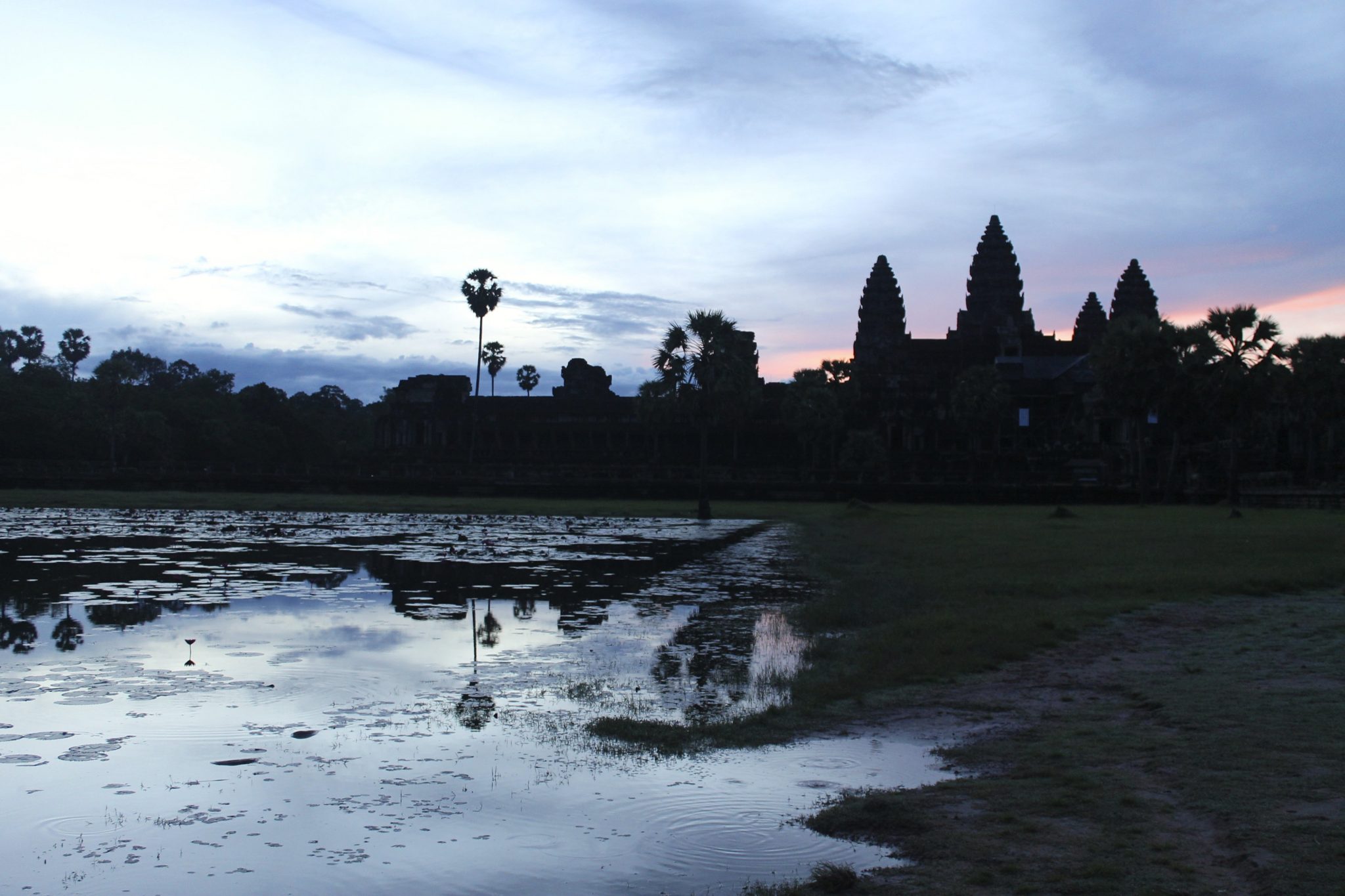 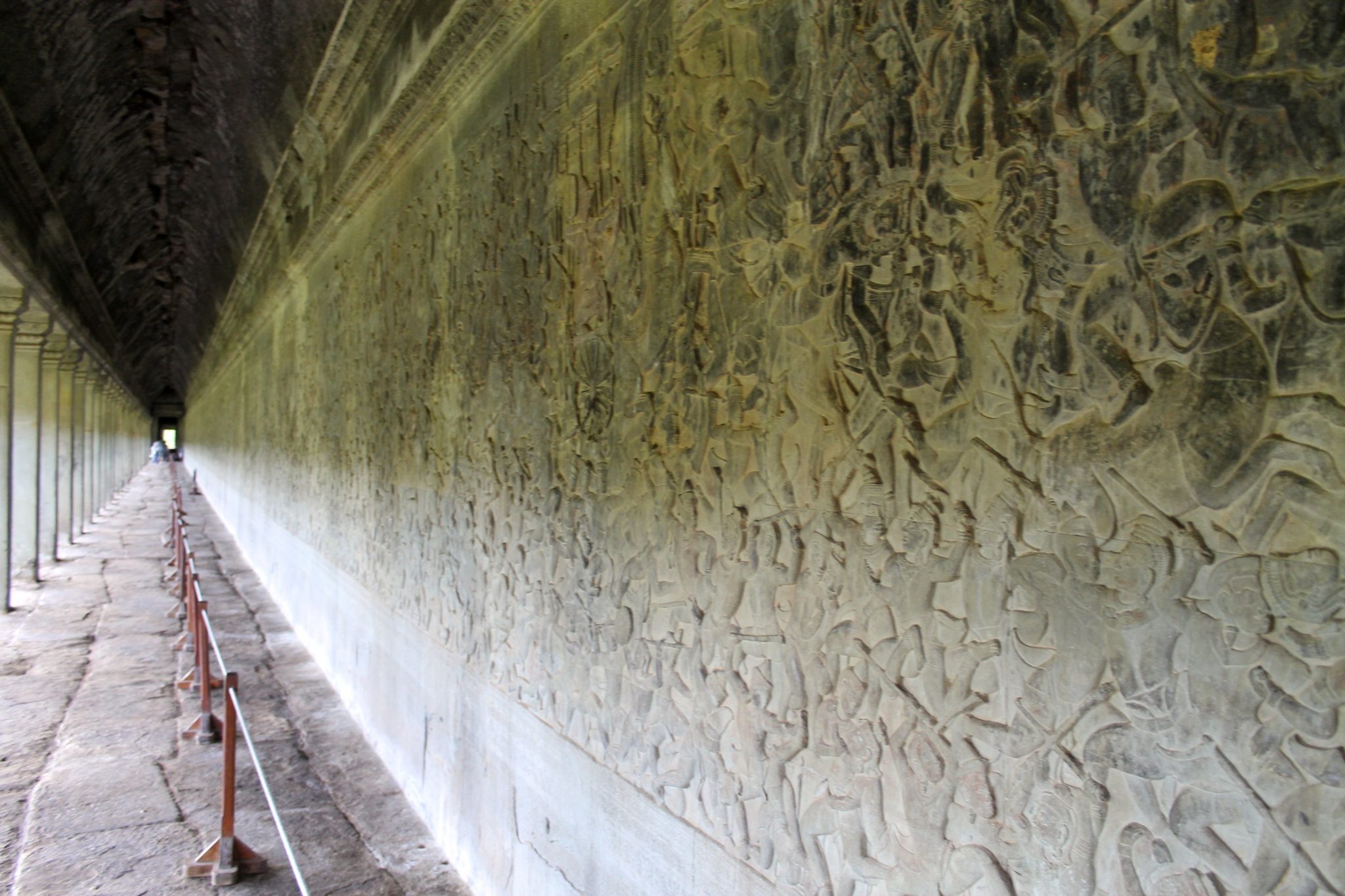 We stayed awhile in Angkor Wat, taking our time to walk around all the intricate bas-reliefs throughout the temple, and saying hello to the monkeys who like to hang out around the back. 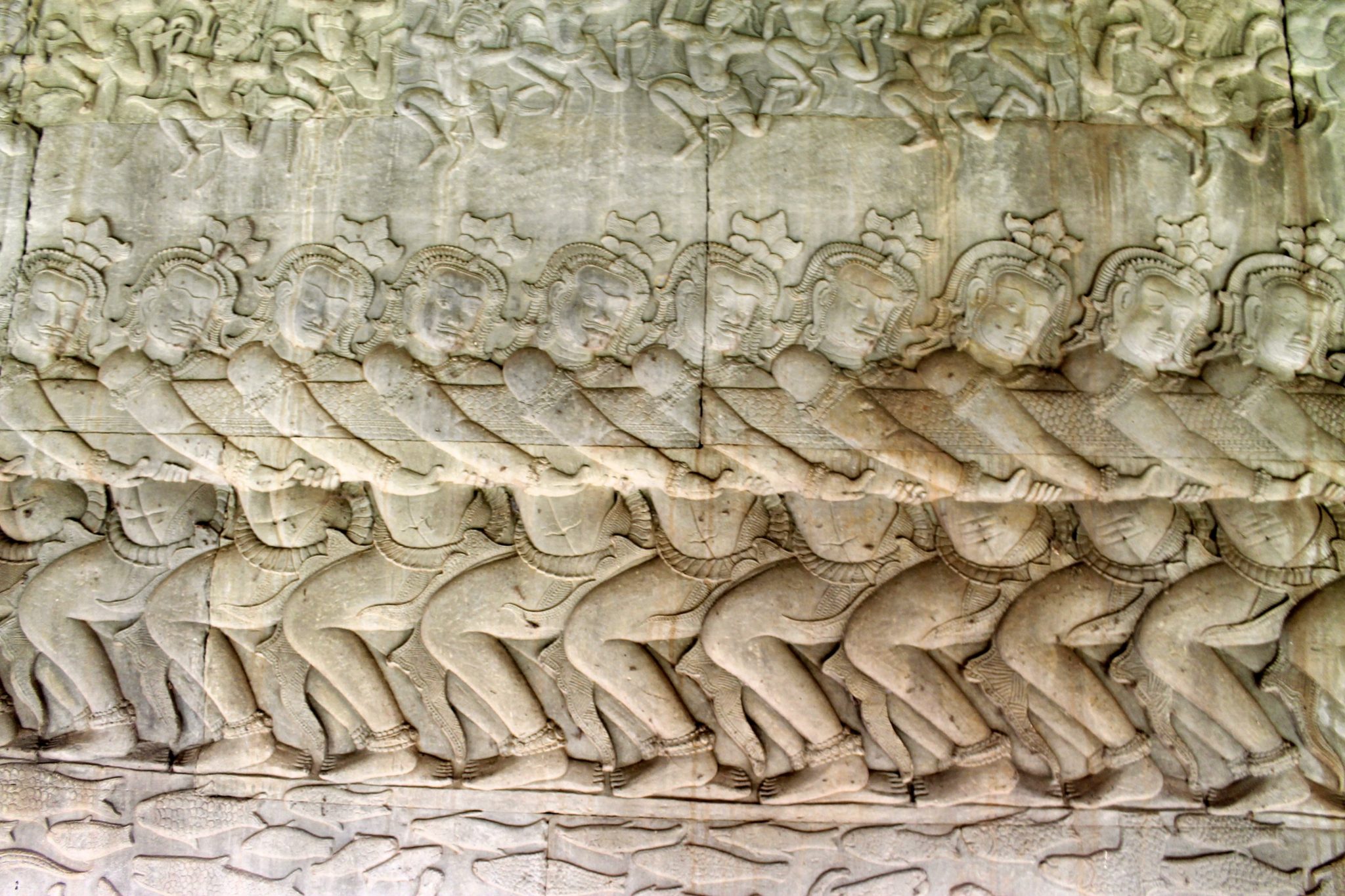 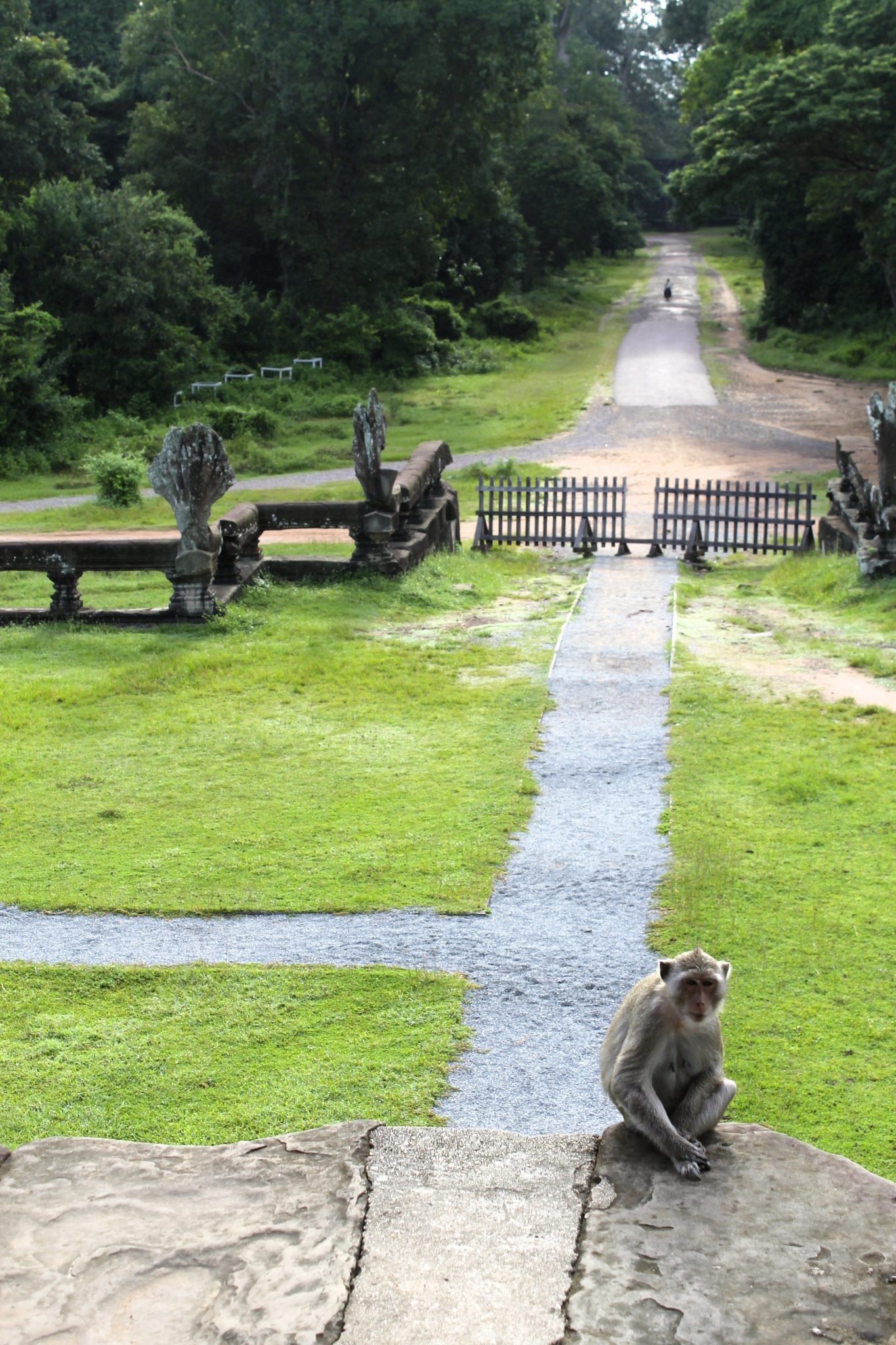 Once we had our fill of Angkor Wat, we hopped back in our tuk tuk and drove to the next stop, the temple complex of Angkor Thom. Once the capital city of the Khmer Empire, Angkor Thom’s most iconic structure is the Bayon, the Buddhist temple of King Jayavarman VII. The most unique aspect of the Bayon is the 216 huge stone faces throughout the temple, it’s also called the temple of the smiling Gods. 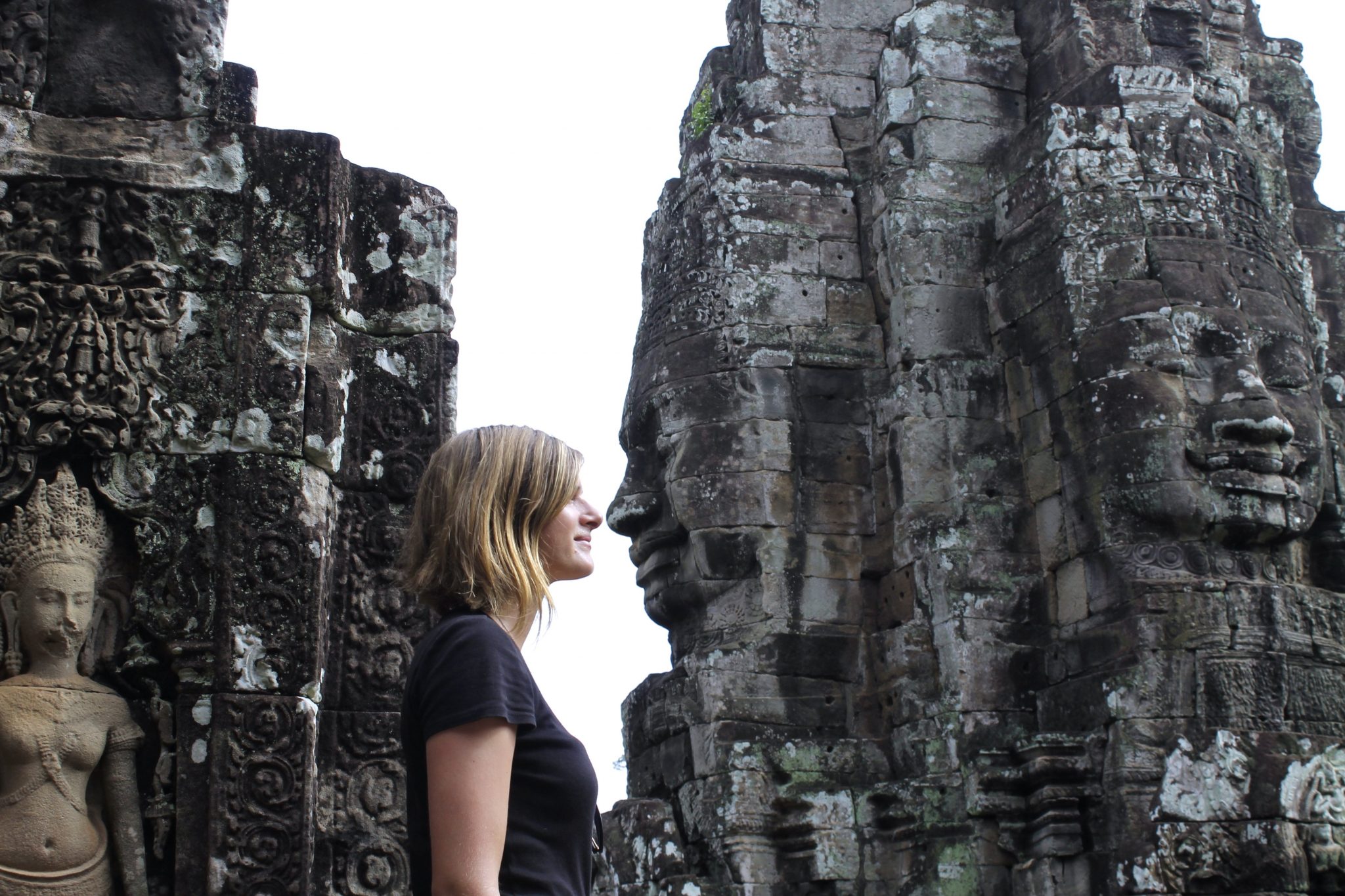 We continued to walk around the huge complex that is Angkor Thom, and explored more than a fair share of ruins covered in moss, and smaller temples, including the notable Baphuon Temple and Phimeanakas Temple. 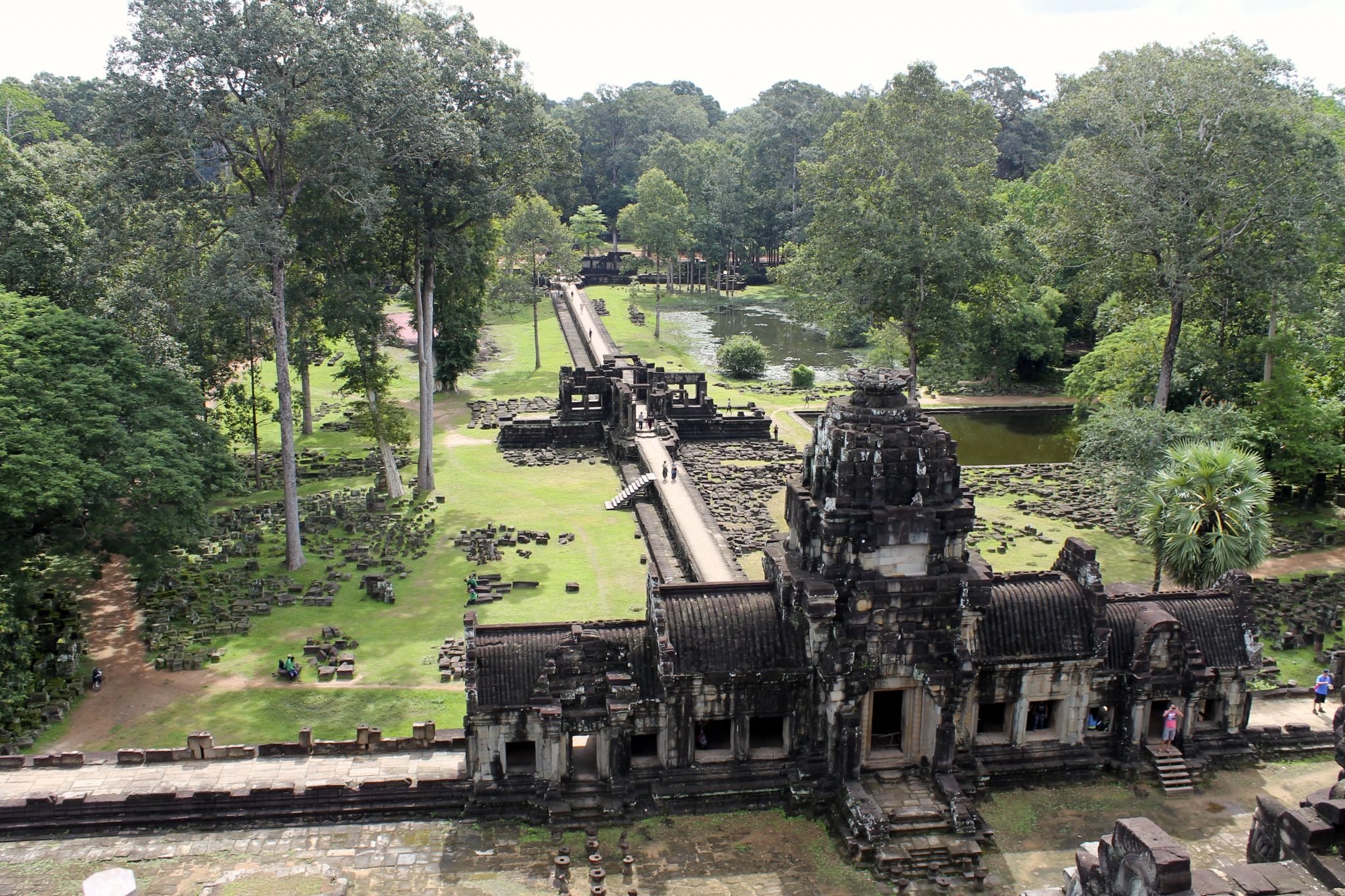 Our last stop of the day was the temple of Ta Prohm, or the temple that was in Tomb Raider. Unlike most of the other temples we had seen that day that had been extensively restored, Ta Prohm is a temple of ruins. Somehow, the ruins covered in dewy moss and soft sunlight made it one of the most beautiful structures we had seen all day. It is also considered the capital of the Kingdom of the Trees, due to it’s high volume of massive ancient tree roots that have taken over parts of the ruins. 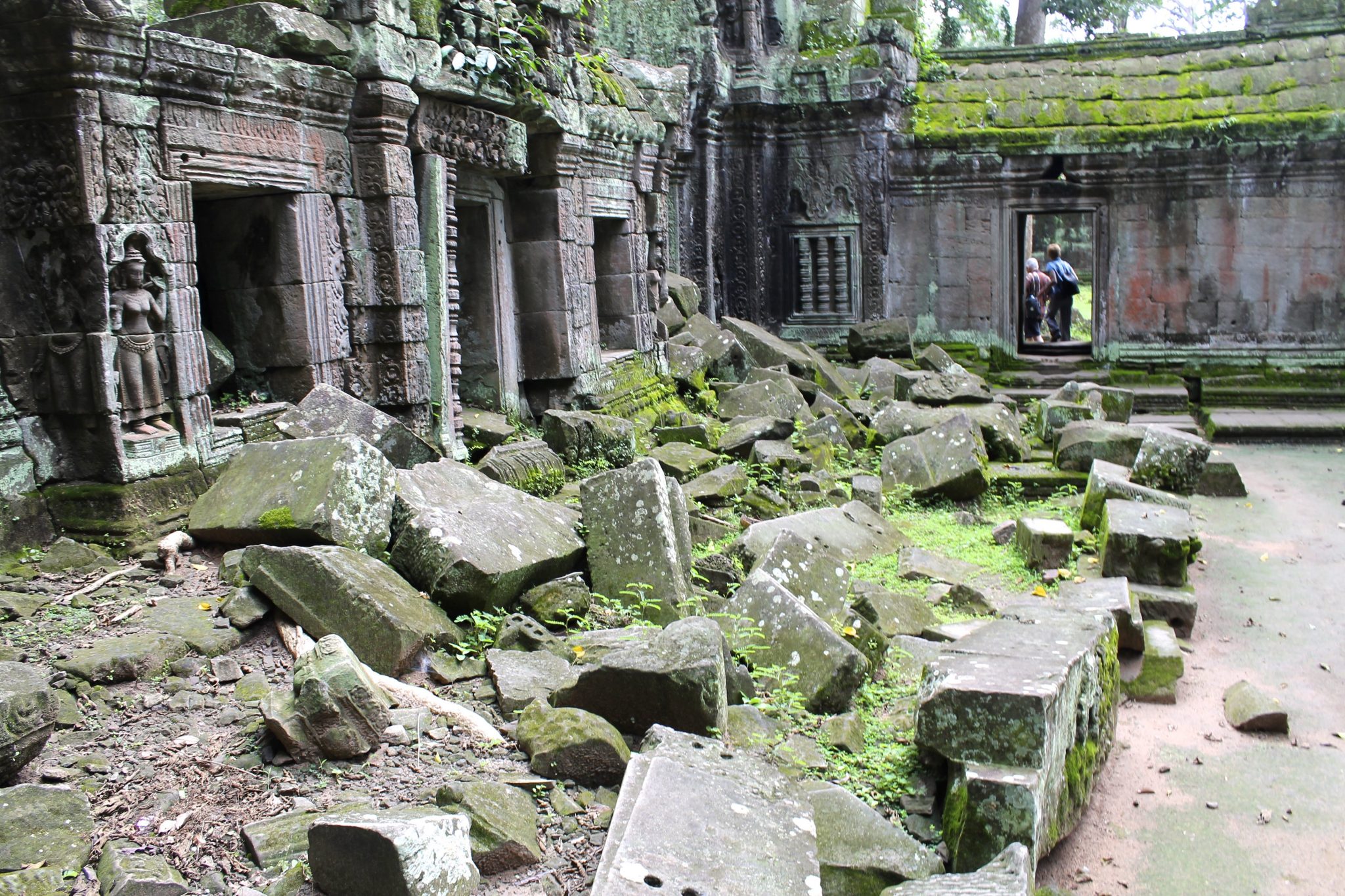 Although it would’ve been great to have viewed the temples with a tour guide, I actually enjoyed exploring the temples on my own and just taking it all in, reveling in the beauty of such ancient structures in the present, and doing a bit of research before and after to understand the history behind what I had seen. I’m also glad that we only bought the 1 day pass, because after a full day of temple exploring starting at sunrise, I can say for a fact that I was “templed-out” and ready to take a nap.

Seeing the Angkor temples was a travel dream come true and an experience, though more expensive than most you’ll have in Southeast Asia, that was well worth the pennies.

It was a great day, taking a step back in time and walking through one of the most historic and religious testaments of the past, and a highlight of my overall time in Cambodia. 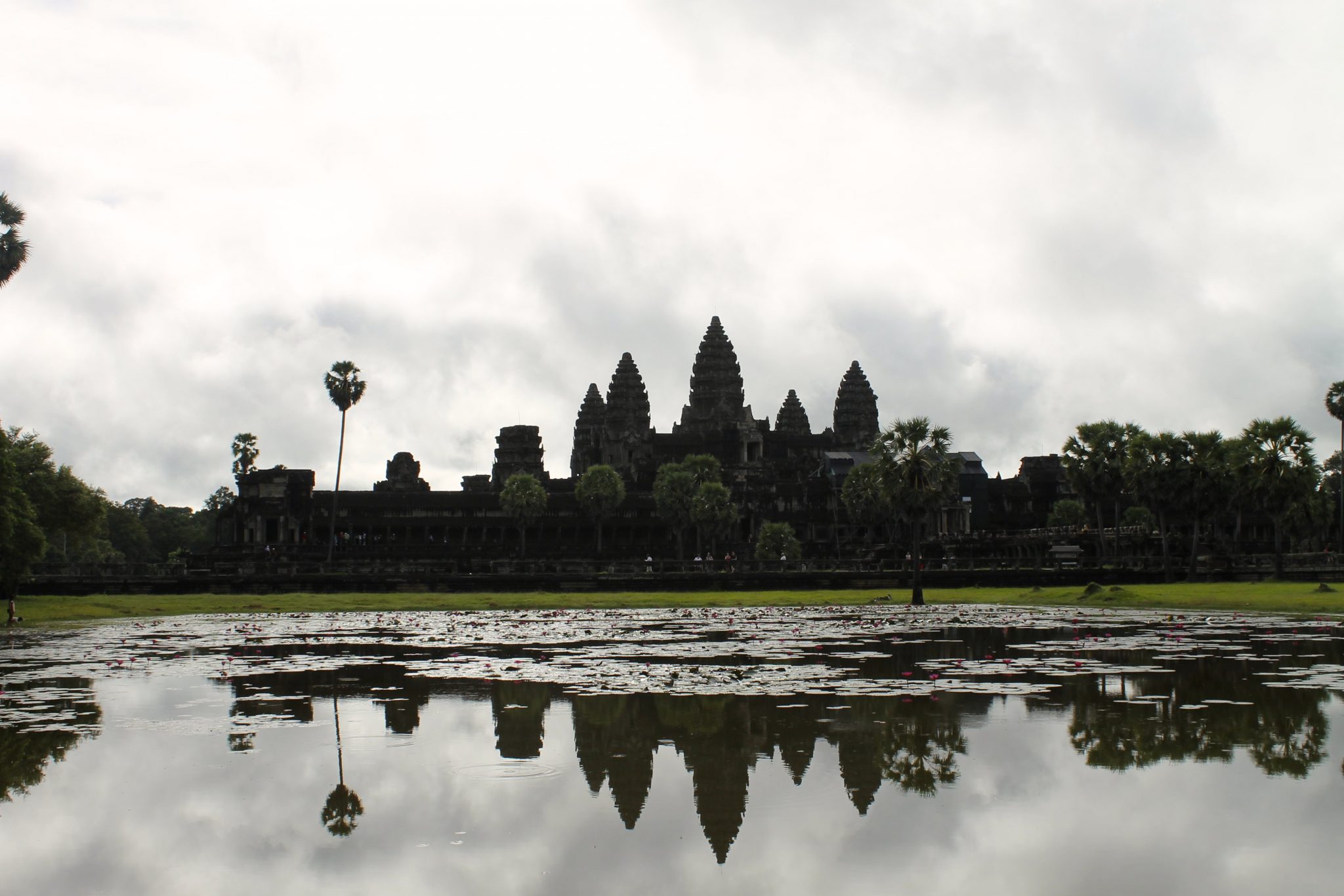