Festivals I Want to Experience in Asia 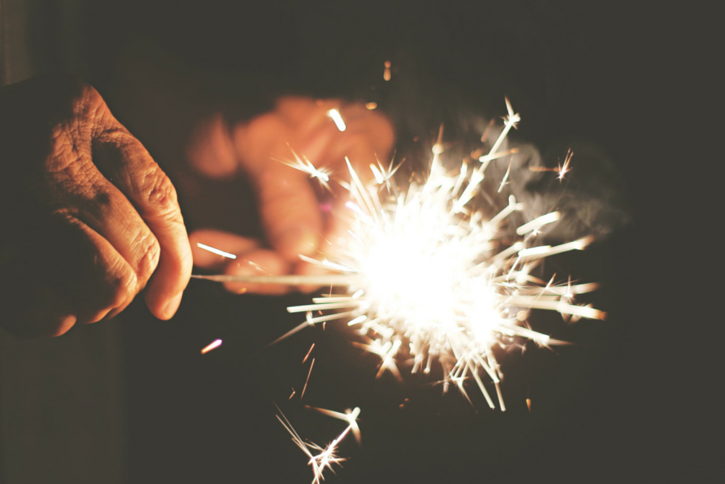 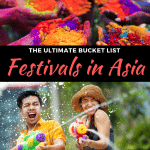 It’s not news on this blog that I’m moving to Asia in the fall, but that doesn’t mean I can’t still daydream about it on here and continue to look forward to my upcoming digs. As some of you who have been with me for awhile may know, I’m big on festivals. Mainly music festivals, but I’ve grown to appreciate a mix of cultural, local, and party festivals as well as the ones that solely focus on music.

Asia has a ton of great festivals, some cultural and some more party, but I wanted to put together a list of all the ones I’m especially looking forward to. I’m going to try and hit as many of these as possible while I’m in the region.

I love colorful things, especially when it comes to festivals, and Ati-Atihan looks like such a treat. I should hopefully be able to make this one since I’m planning on being in the Philippines next January.

Ati-Atihan is a celebration of Santo Niño, also know as the sweet baby Jesus. It happens on the 3rd Sunday of January every year in Kalibo, in the western Visayas. It’s a feast that includes local music, dance, indigenous costumes, and a parade!

From what I’ve heard about Ati-Atihan it seems like everyone is welcome, both religious and non-religous folks. It’s considered “The Mother of All Philippine Festivals” and I’ve also heard it described as the filipino version of Brazil’s Carnival. I’m excited to experience it for myself once I’m over there.

For multiple days red lanterns adorn the city, colorful markets pop up, cultural foods are sold, and everyone is celebrating and hoping for good fortune going into the new year. There’s known to be a float parade, horse races, and an exceptional fireworks show over the harbor in Hong Kong as well.

Losar is the three-day festival for the Tibetan New Year and would also be an interesting and fun way to ring in another cultural new year that is different from my own. I probably wouldn’t be able to attend both Losar and the Chinese New Year in one year, but I have high hopes of including this celebration in my travels at some point.

I’ve heard that the festivities for Losar are some of the best in Kathmandu, Nepal, and they’re open to everyone – whether you’re Buddhist or not.

What I love about the Tibetan New Year is the focus on releasing negativity and truly starting fresh. At the start of the year, you’re meant to do specific virtuous actions and release any old negatively from the previous year.

It sounds like a wonderful way to bring together the local community and traditional customs in one joyful procession and celebration. It’s also a great place to see the Dalai Lama speak – what better way to start the new year with a fresh perspective?

The yogi in me was immediately intrigued when I heard about the BaliSpirit festival in Ubud. As much as I love yoga, I’ve never been to a yoga festival before and I can’t think of a better place to experience one than in Ubud, the only place I truly connected to while I was in Indonesia last.

The festival is for anyone who loves dancing, music, yoga, and spirituality, although even if you’re not spiritual I could still see it being a wonderful event to attend. It sounds like a great way to keep positivity going in the first part of the new year, and I’d imagine also a great way to meet some open-minded and welcoming friends in the international yoga community.

I can’t tell you how much I would love to experience Holi in India. It’s probably the festival I’ve known about the longest on this list and one that I’ve always wanted to see for myself. Did I mention I love colorful things yet?

Holi is celebrated through the country, although some cities may be more fun (or crazy) than others. I’ve heard Mumbai is a fun place to take part in the festival and Varanasi (the most famous place to celebrate it) maybe a little too much on the crazy side, but wherever I end up I’d be happy to finally experience such a well known and vibrant festival.

Holi generally happens in March and represents the start of spring and new beginnings, the victory of good over evil. It’s a celebration of the god Vishnu and the destruction of the demoness Holika.

Holi is a battle of colors and no one is safe. Even if you’re elderly or a small kid, you will get doused in a full spectrum of colored powder or water. It’s also quite common to get high on bhang (cannabis paste) during the festivities, which I’m sure makes for an interesting day.

Another festival I’ve been dying to go to is Songkran in Thailand, also known as the most epic water fight of your life.

Songkran is a Sanskrit word that means transformation or change. It’s a celebration of the Thai New Year, which is celebrated in April, and consists of an all-out water fight that lasts for 3 days. The water is seen as washing away sins, bad luck, and a way to start anew. Thais take it seriously – you will get soaked! Similar to Holi, no one is safe in this celebration, everyone is fair game.

Chiang Mai and Bangkok are known to be some of the best cities to celebrate Songkran, although you can find people taking part in the festivities all over the country and in some areas of surrounding countries as well, in Cambodia, Laos, and Burma.

The 5-day festival of Diwali is enthusiastically celebrated all over the world around October or November each year. I remember seeing the beautiful fireworks from my house in Wellington during the celebrations there, and learning what Diwali actually was at that time. I was inspired to one day experience the celebration in India, where it originated.

Diwali is considered the festival of lights and is seen as potentially the most important holiday celebrated by Hindus. It’s another festival that celebrates the victory of light over darkness, good over evil, and how our inner light protects us from spiritual darkness. You will see lights shining brightly everywhere.

It actually originated as a harvest festival, to mark the last harvest of the year and to honor Lakshmi, the goddess of wealth, to pray for a successful next year. Even today, Diwali marks the first day of the financial year in India.

The celebration includes family get-togethers, fireworks, bright clay lamps, bonfires, flowers, and the sharing of sweets. It sounds like a unique way to experience a special part of Indian and Hindu culture in a beautiful and welcoming way. This would be the time to find a homestay to experience the festivities with a local family, or maybe head to Jaipur where the illuminated markets are said to be impressive and mesmerizing.

Loy Krathong is up there with Songkran as one of the most important festivals in Thai culture, and looks like one of the most beautiful ones to experience on this list. Traditionally, it occurred after the main rice harvest season and it was a way to thank the Water Goddess for her help in a bountiful supply for the year. It can also be seen as a way to “float away” any negativity or past grievances.

People release krathongs, or decorated banana tree trunks, place incense or candles on them and let them float away in small canals, lakes, or ponds while making a wish. If your krathong floats out of sight and is still lit, it is seen as a sign of good luck.

In Chiang Mai, there is a festival called Yi Peng that coincides with Loy Krathong, and celebrates the same traditions around releasing negativity and sending off wishes. However, for Yi Peng families release floating lanterns instead of the floating krathongs into water to send off their wishes. Seeing hundreds of floating lanterns released into the sky is said to be a magical sight to see and one I would love to experience next year.

Have you been to any of these festivals? Which celebrations would you most look forward to with a trip to Asia? Would you recommend any others? 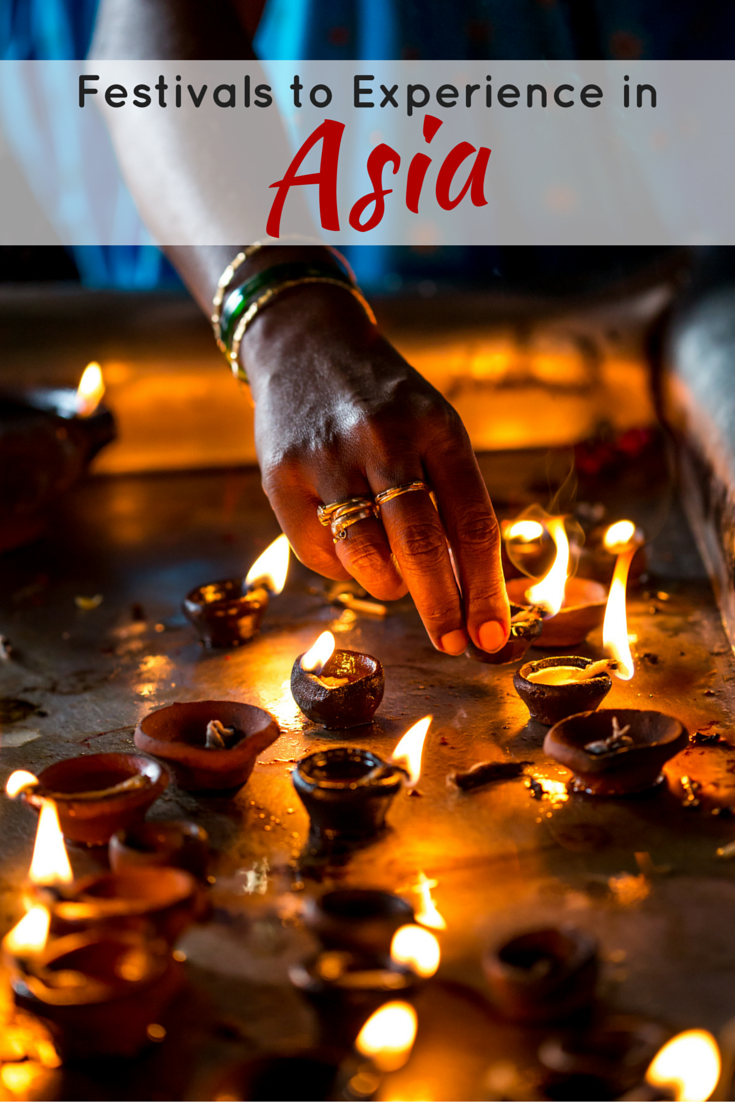