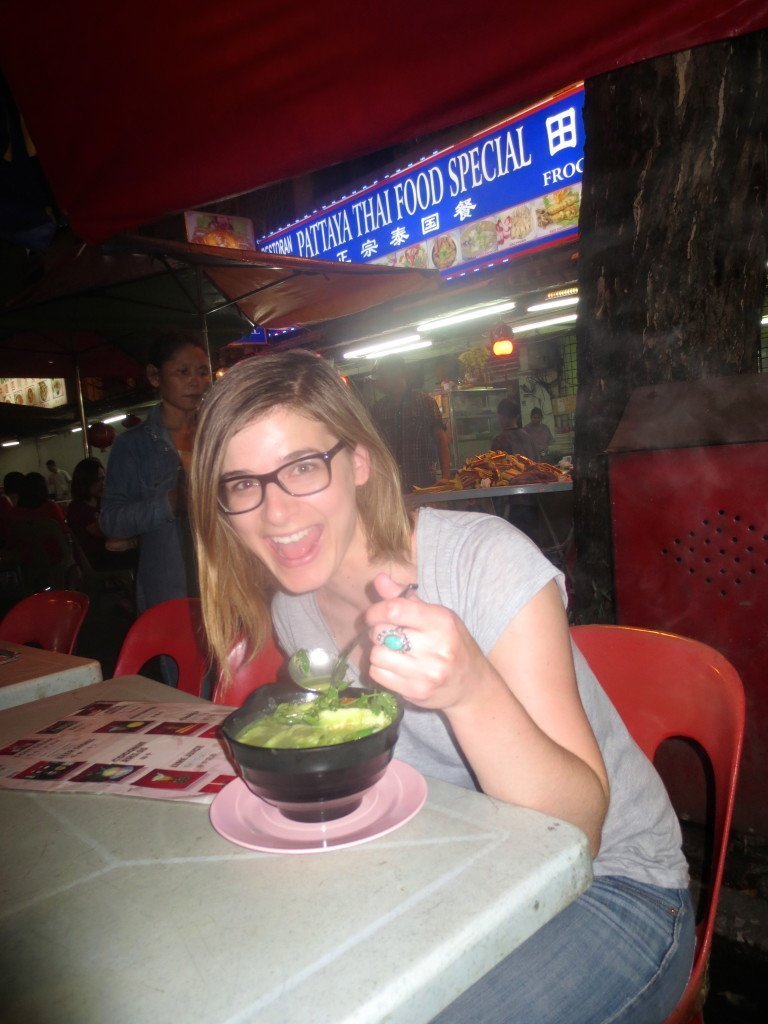 Hot. hot. hot…and my backpack feels about 15 pounds heavier than when I checked it in this morning. Okay, but let’s be real, Malaysia is rad.

I know I’m skipping around a bit because I haven’t even written about my time in Sydney yet, or the few more posts that I had planned about Melbourne, but I just wanted to give a quick, dry, and dirty run down of my first impressions of Malaysia while they’re still fresh in my mind.

It’s a bit surreal that we’ve actually made it – It’s exactly as I imagined Asia to be, but better because I’m actually here experiencing the crazy vespa drivers, the street food, the random vendors blasting Top 40 from about 5 years ago (yes, that includes some classic Pitbull and Chris Brown).

It’s literally a party in the streets.

But let’s start from the beginning. It was a crazy day from the get-go. I made it to the airport an hour later than I was supposed to because I got off on the wrong stop in the CBD in Sydney for my train connection.

When we finally arrived at the check-in counter for AirAsia, my carry-on was too heavy. Apparently you’re only allowed to carry the weight equivalent of a small book for discount airlines.

I stepped aside to repack, and stuff more of my things into my backpack, a seemingly impossible feat, but I somehow made it work.

I think sitting on it and using every ounce of my strength to squish it down helped a bit, and I’m sure I was great entertainment for everyone else waiting in line watching me.

I let out a big sigh of relief when we finally made it to our gate about 15 minutes before they started boarding. Laura, my British friend whom I’m currently traveling with, and I were two rows apart.

We soon realized that in the row between us sat the most annoying children I have encountered on a plane – or as Laura so eloquently put it, “the demon children”.

When they weren’t poking Laura in the back of the head, they were stealing my bag underneath my seat or staring me down without blinking, it was creepy. 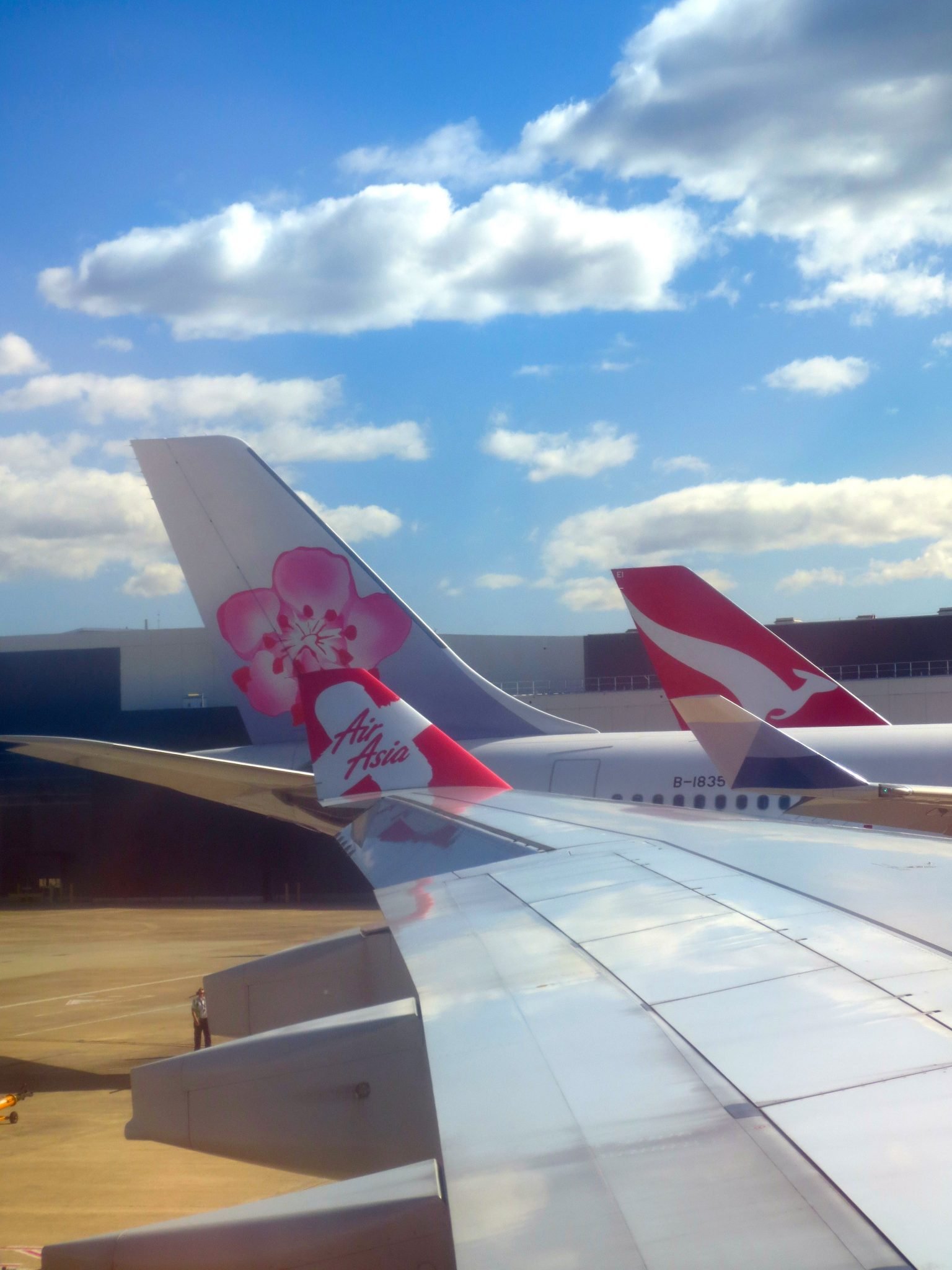 After 10 hours on the plane, we stepped out into some of the most humid weather I have ever experienced, I don’t even think Italy in the summer rivals it.

And then it was on to tackling the public transit. Our plan is to stay as cheap and authentically local as possible, so I’m sure I’ll have some hilarious stories to ensue shortly.

Us and one other girl were the only non-locals on the bus, I especially liked the Bollywood ringtone that kept going off from the man in front of me for the hour long journey into the city.

After we stepped off the bus and into the humid rain, we found the monorail, and ended up in the Golden Triangle neighborhood where we walked around aimlessly going into random places and trying to figure out where we were.

We had one hostel in mind, but we were so exhausted, hungry, and dehydrated at this point that we just started going into guesthouses until we found one that clicked enough for one night.

I don’t even know the name of the place we’re staying in, but it’s cozy and pretty decent for the equivalent of AUS $10 a night in the heart of the city.

Also, Kuala Lumpur is a gorgeous city at night. There are so many colorful lights everywhere, this was especially apparent on the monorail. 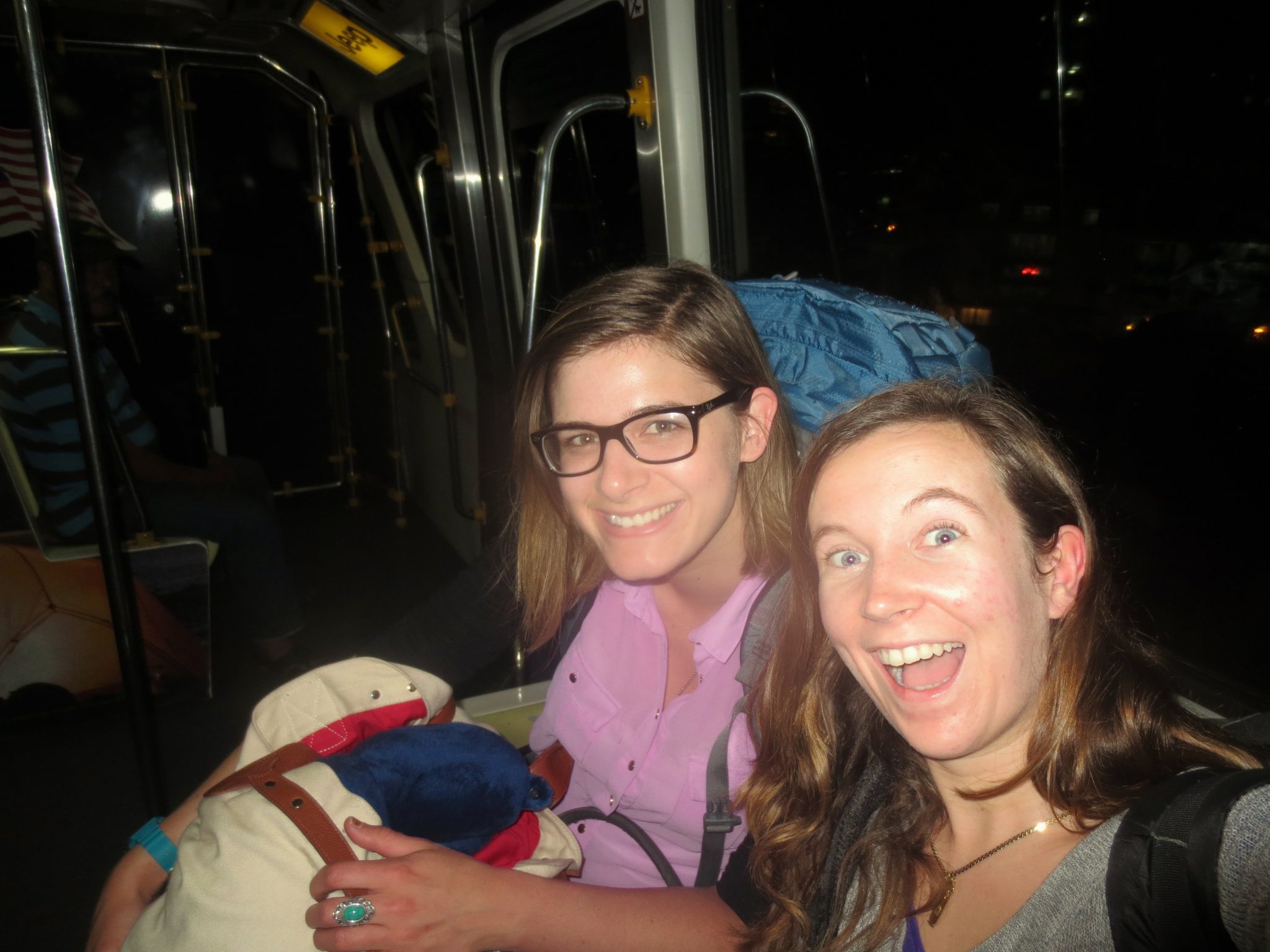 I had my first wonderfully delicious Asian dish at a street stall called “Frog Porridge”. They do in fact sell frog porridge, Laura and I are going to try it our last night in Kuala Lumpur.

Tonight, however, I stayed with the safe choice (fingers crossed), of the spicy green vegetable curry. It was A.M.A.Z.I.N.G., and I’m not even in Thailand yet.

I already know that the food is going to be one of my favorite things about this whole trip, I absolutely love Asian food. 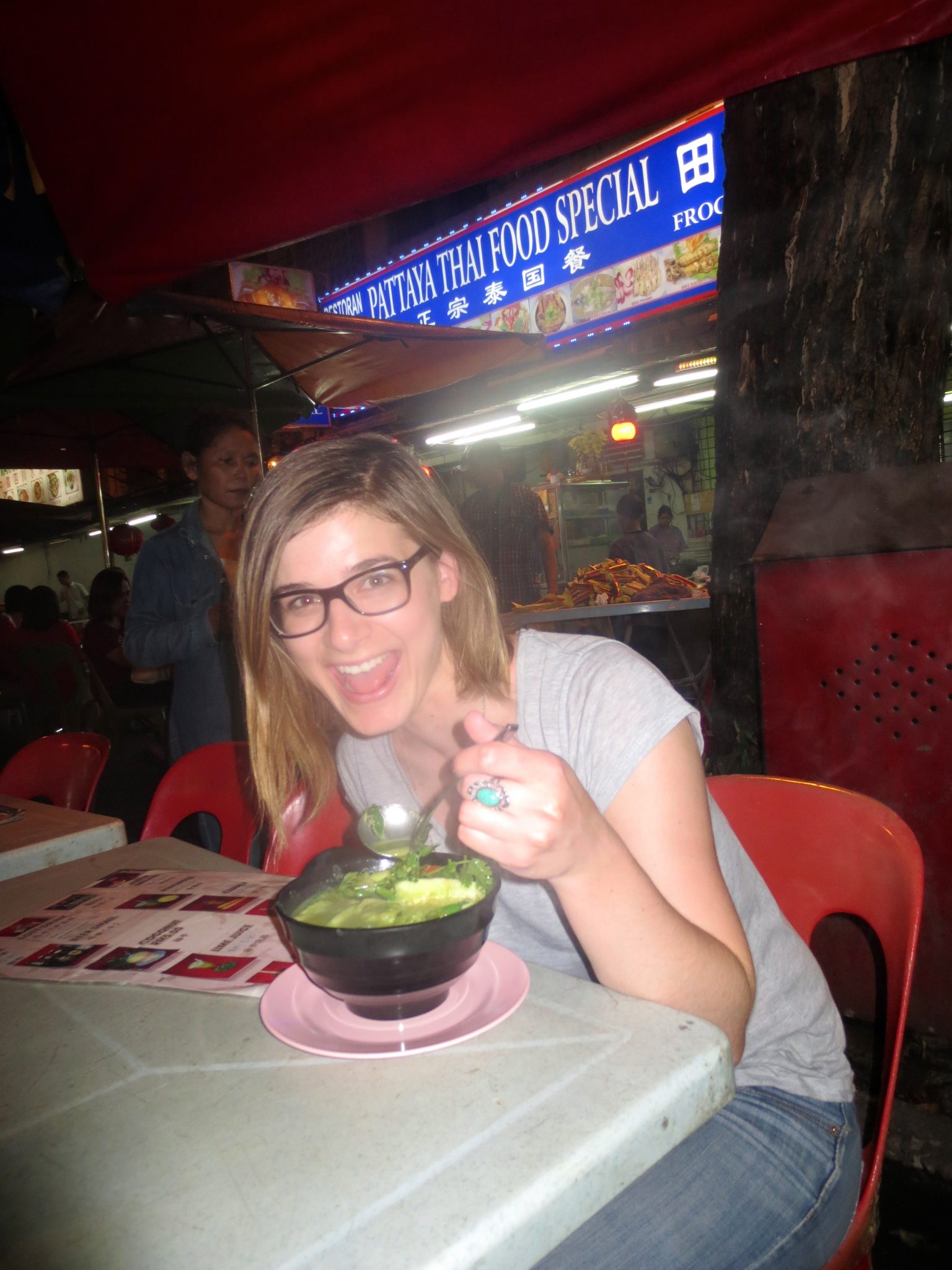 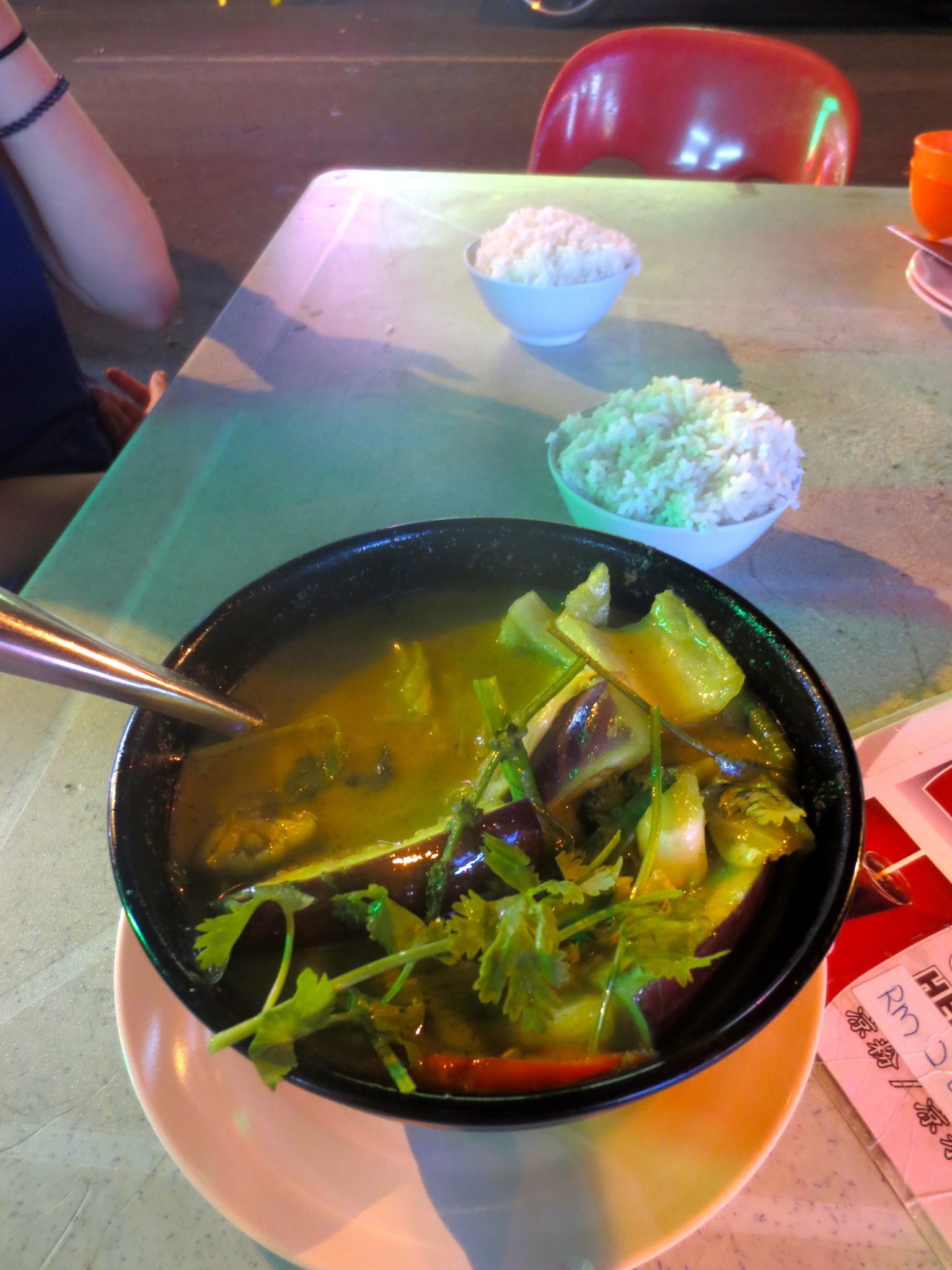 Fun facts I learned while reading some Malaysia travel guides on the plane – it is home to the largest species of cockroach in the world.

However, it’s also the greenest (aka most jungle-esque) country in Southeast Asia, so I guess the pretty scenery makes up for the first fun fact? I hope. If I see one of those cockroaches I may reconsider.

And so, the Asian adventures begin…