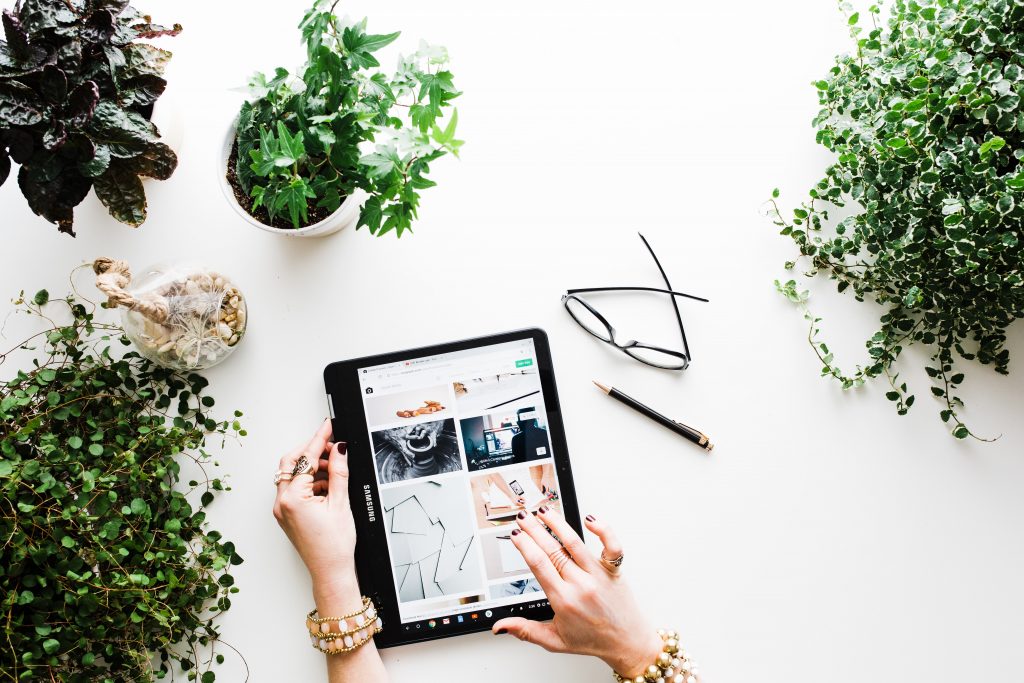 My February 2020 income report! A full recap of how I hit my first milestone of $1000 per month in passive income.

February was a milestone month for me and my passive income goals. Although $1,000 may not seem like a ton of money, it’s not too shabby for passive income.

It’s also the first step to reaching bigger goals and a reassurance that my passive income strategies are actually working.

If you have been following these reports since I started writing them, you’ll remember that I started at $0 in passive income in August.

Six months later I’m at $1,000 and my passive income growth is finally starting to pick up speed, which gives me hope for hitting even bigger goals throughout the rest of 2020.

In case you’re new here, these monthly reports are where I give you an honest look into how I’m building my blog into a business and finally monetizing it after over six years of blogging.

I write these income reports for my own accountability, but also to show others how to go about monetizing their blogs – whether they’re new to blogging or they’ve been at it for years.

These posts are also a good way to keep track of what I’m trying in terms of monetization and what is and isn’t working the best for my website.

My goal is to be as transparent as possible with these posts to give you a good idea of how much work goes into running a financially sustainable blog, and the different income streams that are out there for bloggers.

My main focus right now is building my passive income so I’ll have more time to expand my brand and make this blog better in the process.

So, let’s talk about February.

If you want to see my past income reports where I explain the different revenue streams I’m building in more detail, you can find those here: August, September, October, November, December, January.

Note: this post contains affiliate links, which help run this site at no extra cost to you so I can keep writing these income reports and providing free travel advice and tips.

With my book done and published by the first week of February (the first digital product created for my blog), the rest of the month was focused on building out a sales funnel for it.

To do this, I revamped my sales page, created content upgrades from my main California posts, and created an up-sell page.

This is usually a more in-depth guide and checklist for whatever the blog post is on. 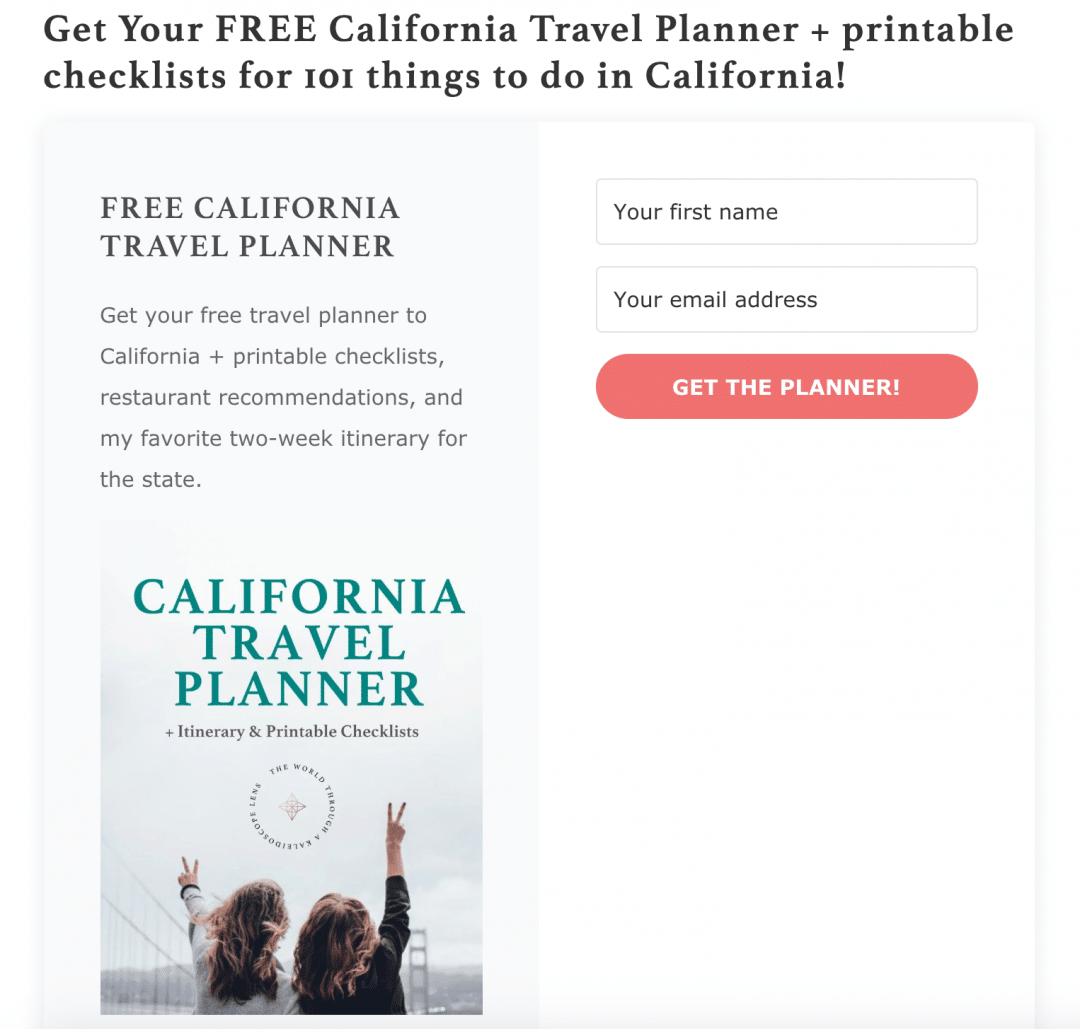 Once they download the guide, they’re sent to my up-sell page with a personal video by me and a one-time discount for my book.

I was inspired by Suzi’s one-time offer funnel idea from Start A Mom Blog for this particular funnel.

These users are added to my email list in order to get their free upgrade. Eventually, I’m planning on building an automated email series around that group that circles back to my book if they didn’t purchase the first time around.

To be completely honest, the funnel hasn’t taken off as much as I hoped it would.

It’s one of those things that is going to take some tweaking and readjusting in order to figure out what works well with my audience.

My book might also not be the perfect up-sell from my city-focused California posts since it’s about road tripping around the state.

Again, I want to take some time to test out a few different funnels and versions to see what works and what doesn’t.

In February, I also put together a more detailed affiliate marketing strategy that I’ll be implementing in March, and I finally started getting my Mediavine RPM to where I want it to be.

Overall, it was a milestone month in multiple areas – not only for income but also for my site traffic.

Similar to January, I didn’t post any new content on my blog, but instead focused on getting more backlinks to the content that was already gaining momentum and which could bring me the most traffic if it was ranked higher.

In total, I saw an increase of $214 in passive income this month compared to January, and I only see that going up as we head into March with what I’m currently working on.

Here’s a breakdown of my stats from February.

*with comparisons to January stats

February Traffic Comparison to Other Months 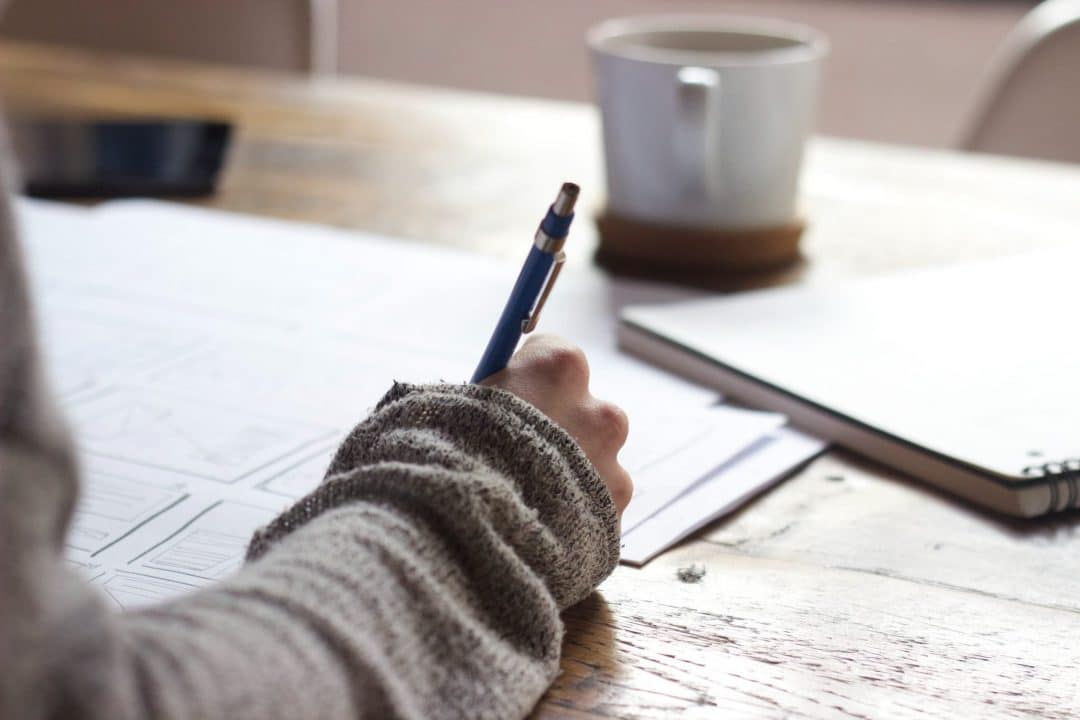 Review of My February Goals

Set-up my E-book sales funnel – Between creating content upgrades for my main California posts and finalizing sales pages, setting up my E-book funnel took up most of my time in February.

I was originally thinking of making destination-specific content upgrades for every California post getting traffic on my blog.

However, the content upgrades take a decent amount of time to put together since they are 8- to 9-page guides and checklists.

So, instead, I focused on creating specific guides to my top four California posts and used a more generic free California guide for additional California-related posts.

I’m going to test these out for the next month and see how they do before investing more time in this strategy. I’ve already had around 60 people download these free guides and join my email list.

I’ll be writing up 13 guest posts in March with authoritative sites that will help me build a stronger backlink profile. And I already have a few guest posts set up for April too.

Two of my cornerstone California posts with high traffic keywords got to the first page of Google in February.

I have a couple more cornerstone posts that are getting closer to the first page and I think those will continue to boost my traffic in March. My goal is to reach a new milestone of 50K pageviews in March.

This could have been higher if I had figured out my low RPM issues sooner (more on that below), but I was still happy to increase this income stream in February, especially with fewer days in the month.

And the best part is that it was through diversified streams of passive income.

The majority is still coming from Mediavine, but I also increased my affiliate sales and I had a few book sales this month. 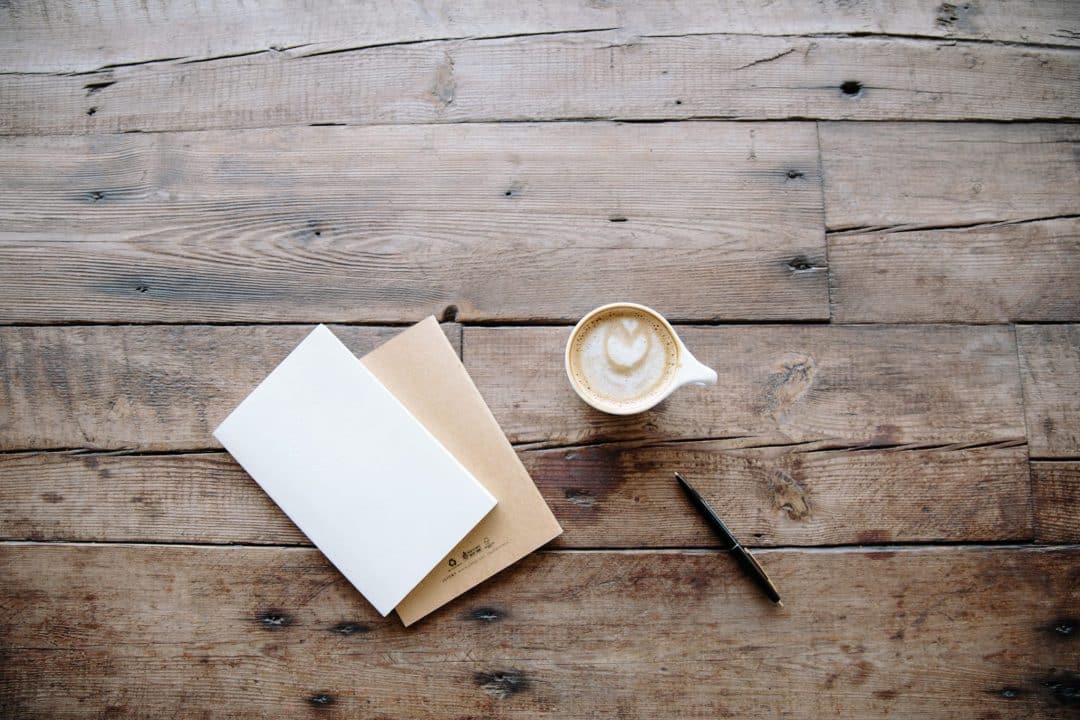 SEO / Mega Cornerstone Posts
It was a great feeling to see two of my highly competitive cornerstone posts reach the first page of Google in February.
This helped my traffic increase by more than 10% in February compared to last month.
It wasn’t as large of an uptick as what I saw in January compared to December, but still pretty good for not posting any new content (besides my income report) in February.
From those cornerstone posts hitting the first page of Google and a few other posts moving up in the Google rankings, I increased my traffic by over 4,000 pageviews in February.

In February, I worked on figuring out the details of my new affiliate marketing strategy that I mentioned in my January income report.

The strategy involves focusing on a few high priced affiliate products that I love and really going full in with them.

I plan to focus on writing up content – both specific review posts and supporting spiderweb posts – and shooting YouTube videos for each product.

Then, I’m going to work on building a ton of backlinks to those pieces of content to get them ranking on the first page of Google.

If I’m able to get these posts, even just the five specific review posts, ranking on the first page of Google, I’m estimating they could bring me in anywhere from $2000-$4,500 a month in affiliate income.

In February, I also added ‘What to Pack’ sections with affiliate links to all of my top performing posts and I saw my Amazon affiliate income go up slightly this month as a result.

Even though I didn’t work on Pinterest at all in February, I still managed to increase my Pinterest traffic by about 2,000 sessions this month.

Similar to what I hypothesized in January, I think a few of the pins I worked on during my initial Pinterest strategy implementation last fall are finally starting to rank.

I’ve heard it takes a few months to start seeing results from Pinterest SEO, and the timeframe lines up with my boost in Pinterest traffic in January and February.

It could also be a combination of that and the time of year when more people are searching for travel content on Pinterest. Whatever the cause, I was very happy to see the increase in my Pinterest traffic in February.

I finally figured out my issues with my low Mediavine RPM (revenue per 1,000 impressions) in January and early February.

I emailed Mediavine a couple of weeks ago to ask them what I could be doing better, and they were quick to come back with a whole list of suggestions.

Side note – this is what I love about Mediavine support. They really want you to do better, because if you do better everyone does better.

I started implementing what they suggested last week and my RPM has already shot up significantly. I’m now averaging $30-$35 RPM per day, compared to $12-$15 RPM at the start of the year.

It has made a huge difference in what I’m making per day with my ads. 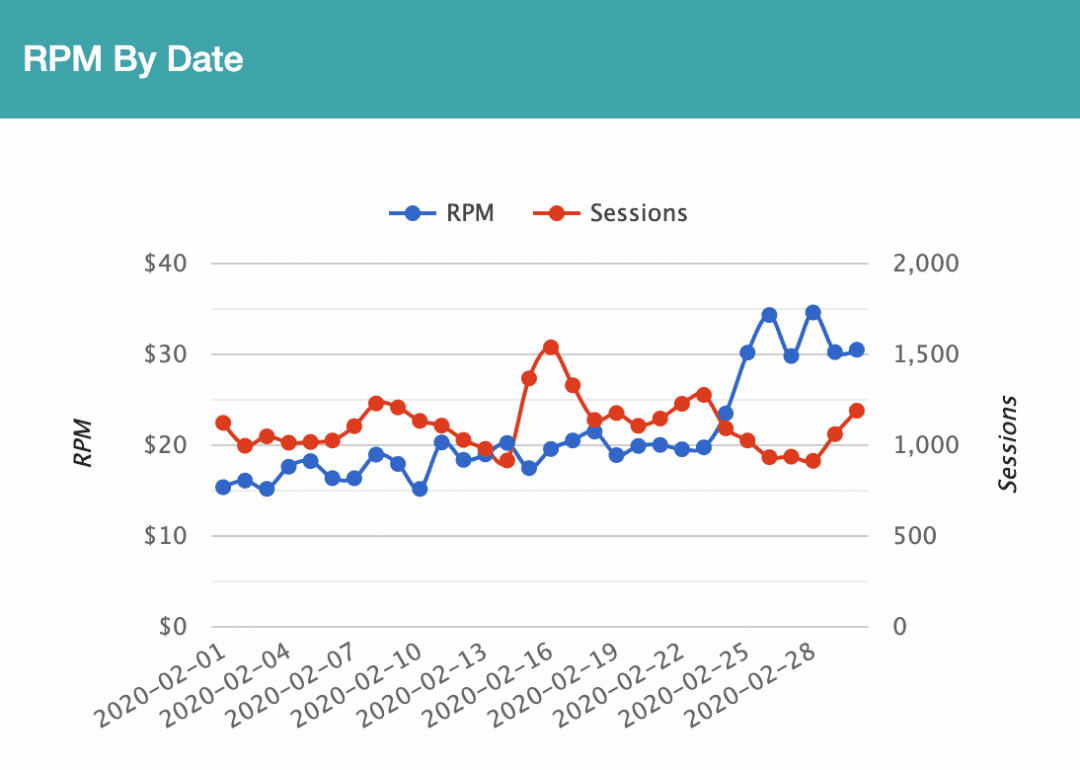 Although I finished setting up the structure and main parts of my first attempt at an E-book funnel, it’s not converting yet.

I still need to troubleshoot this to see where I’m off.

My end goal is to earn at least $1,000 in book sales per month on autopilot once I have a working funnel.

However, I’m going to hold off on improving this until I increase my affiliate income, since I know affiliate income will be a more reliable way of increasing my income sooner.

I’m hoping I’ll have time to revisit my book funnel in April or May – once I’m at around $3K-$4K in passive income from Mediavine and affiliate marketing. 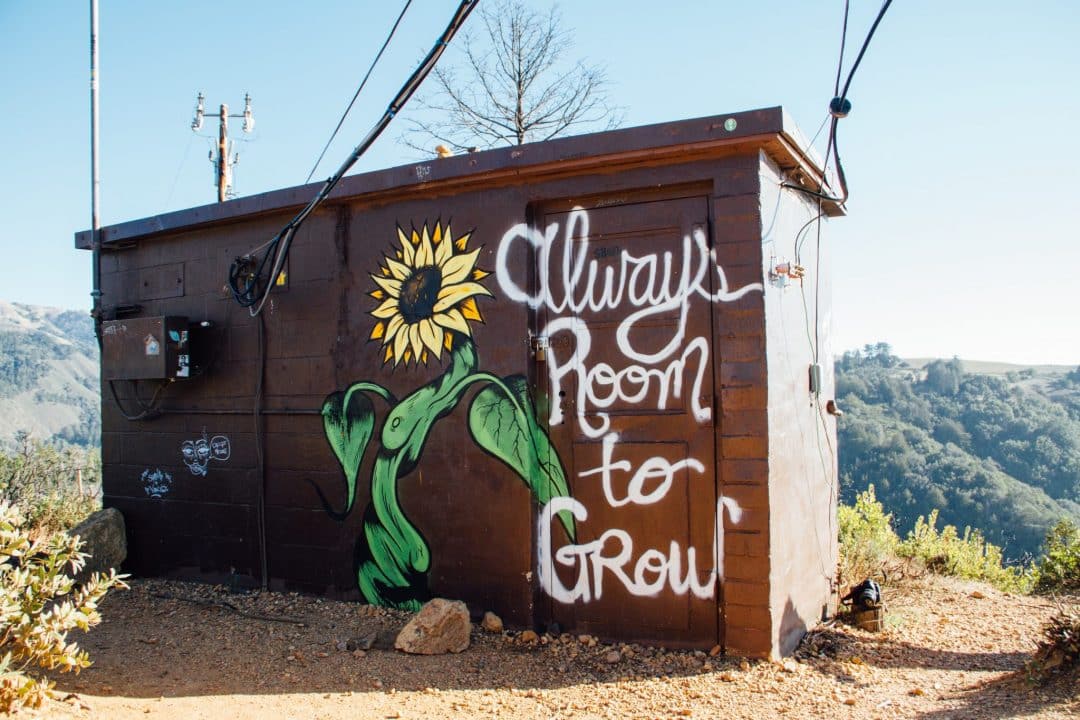 What’s Next for March

Since the beginning of 2020, I feel like I’ve finally started to see real traction on my passive income goals.

As I said toward the end of 2019, those last few months of 2019 were about seeing what worked and what didn’t, testing out as many strategies as possible.

I think I’m finally seeing what works well and doubling down on it like I wanted to do.

We’ll see how March goes, but I’m fairly confident I’ll have my biggest increase in income yet by the end of Q1.