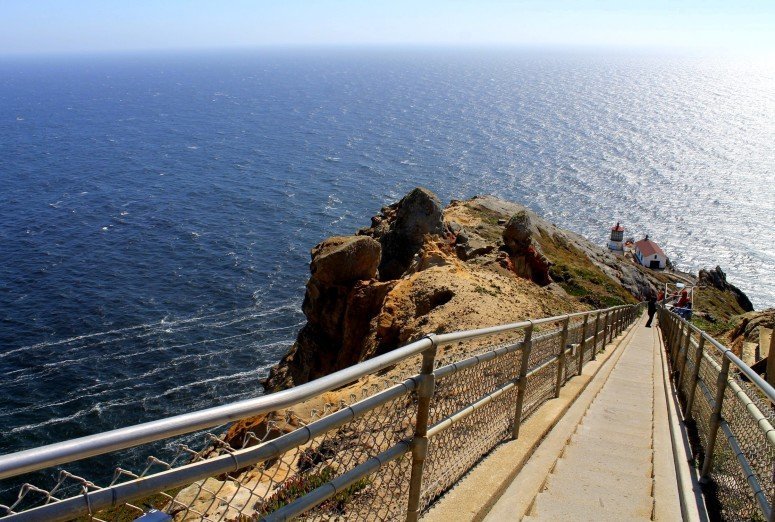 I looked at our map which probably hadn’t been used since 1980. I traced my finger up the California coast through all the spots I knew so well and stopped just north of San Francisco. Point Reyes. It sounded familiar, a place that my friends from the Bay had mentioned countless times before, I’m sure, but one I had never ventured to myself.

After putting it into Google, I was sold. Point Reyes National Seashore looked like the California coast I love and a potential new spot close to home to add to my favorites.

At over 71,000 acres there is a lot to see and not many places to camp unless you plan ahead of time and don’t mind roughing it in the backcountry. Unfortunately, the few camping spots that are in the park were filled by the time we arrived during high season, but we were still excited for a full day of exploring the park until sundown.

This part of the California coast was one of my favorites of the road trip – from San Diego to the Oregon Coast. This partially had to do with the fact that we felt so tucked away, even in high season. After a week in San Francisco with my sister, and one too many martinis and crowds of people at the popular spots around the city, we were ready for low-key.

When we pulled up to the information center and especially once we took to the open road inside the park, I had the overwhelming feeling that we were discovering something for the first time, our own little hideaway. It felt like a place that people don’t have the pleasure of seeing very often – although I’m sure that’s not actually true with it’s perfect location.

If you’re not looking to go camping, or you’re not lucky enough to snag one of the camping spots like us, it’s not a bad day trip from either San Francisco or Petaluma. However, it’s a huge park, and I do wish we would’ve had a few days to explore the hiking trails and wildlife in more depth.

In fact, there are over 1,500 species of plants and animals to discover at the park. We saw a couple of elks grazing on the side of the road while we were cruising along the well kept roads.

There is a lot to love about Point Reyes with 100 square miles of coastal wilderness, 80 miles of undeveloped shoreline, 150 miles of trails, and my personal favorite, one of the most stunning lighthouses I have ever seen.

The lighthouse is situated on the windiest point of the Pacific Coast. No really, when we were walking down to it I had to hold on to the handrail during some parts for fear of blowing over the edge of the railing. It’s also located at the second foggiest place on the North American continent, which is quite the feat.

Built in 1870, you can tell that the Point Reyes Lighthouse has a lot of history behind it. As I walked into the small enclosure, I tried to imagine the rugged life of a lighthouse keeper, living in a lonely yet beautiful place that felt like it was at the edge of the world.

If I was living in the Bay Area, I would be over here every month to take advantage of the many trails and wild animals to see, especially the baby seals. It’s hard to beat the chance to see baby seals, they never get old.

As we were leaving this special place, I looked behind me at the miles of Pacific Coast shoreline, and the lyrics from Bon Iver’s Holocene came to mind:

“And at once I knew I was not magnificent, strayed above the highway aisle. I could see for miles, miles, miles”

Have you ever been to a national or state park that completely blew you away? What are your favorite stops along the California Coast?

Looking for more northern California travel inspiration? Check out these related posts below!

101 Things to do in Santa Cruz

43 Things to do in Lake Tahoe

5 thoughts on “Postcard from Point Reyes”