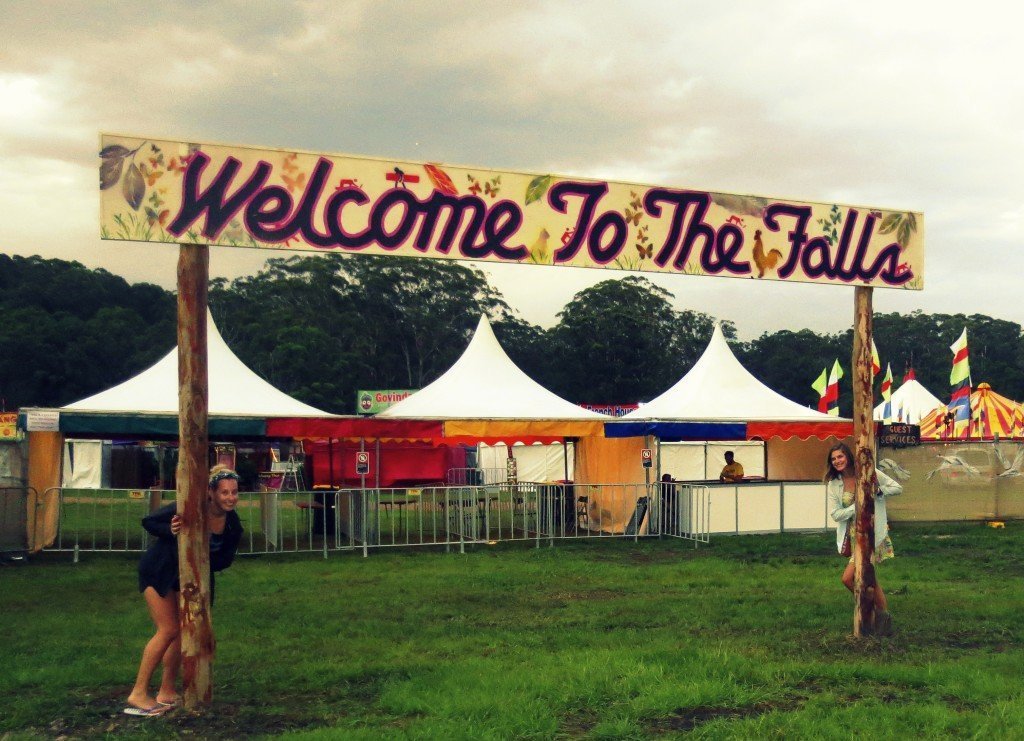 Falls Fest is one of the larger festivals in Australia, one of the festivals that “tours” around the country to Marion Bay (Tasmania), Lorne (Victoria), and Byron Bay (NSW). I mean, it’s a 4 day festival, you don’t hear of that very often. 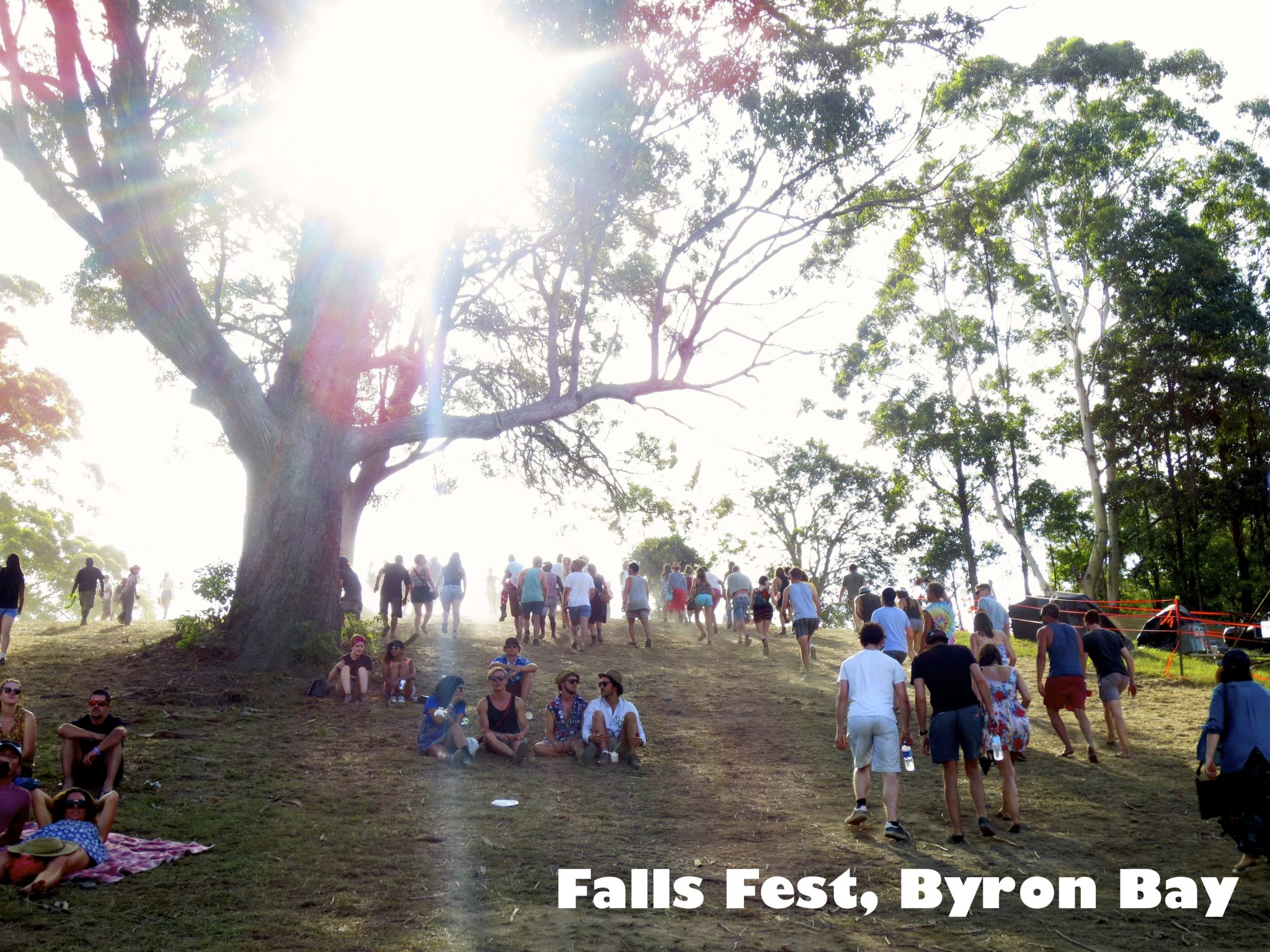 I applied for Byron Bay, even though I knew it’d probably be a long shot to be involved with putting on such a big festival with the little experience I had in the field. To my surprise, I heard back a couple months later when I was in Thailand. They wanted me to come in for an interview in Sydney, unfortunately since that wasn’t a possibility while I was abroad, I asked if I could do a Skype interview instead. 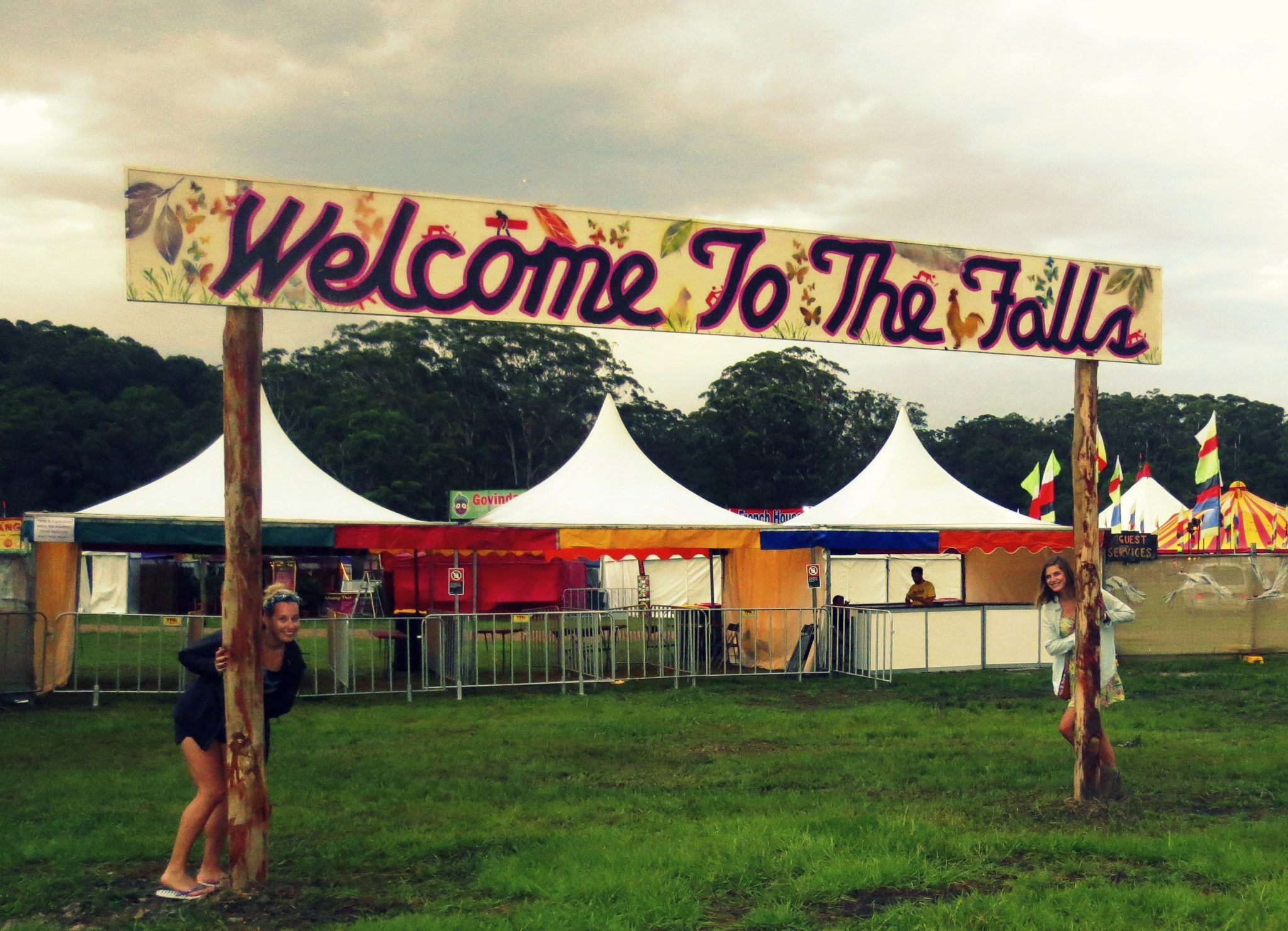 I never heard back from the festival director, and so sadly accepted that I wouldn’t be able to work this festival due to bad timing.

When I arrived back in Australia a few weeks later, I emailed them one last time to see if they were still looking for volunteers. The festival director called me immediately, and I had an on the spot phone interview. As I hung up, the director basically guaranteed me a spot with the volunteers. The next day I received the official email that I would be a volunteer. I was ecstatic. 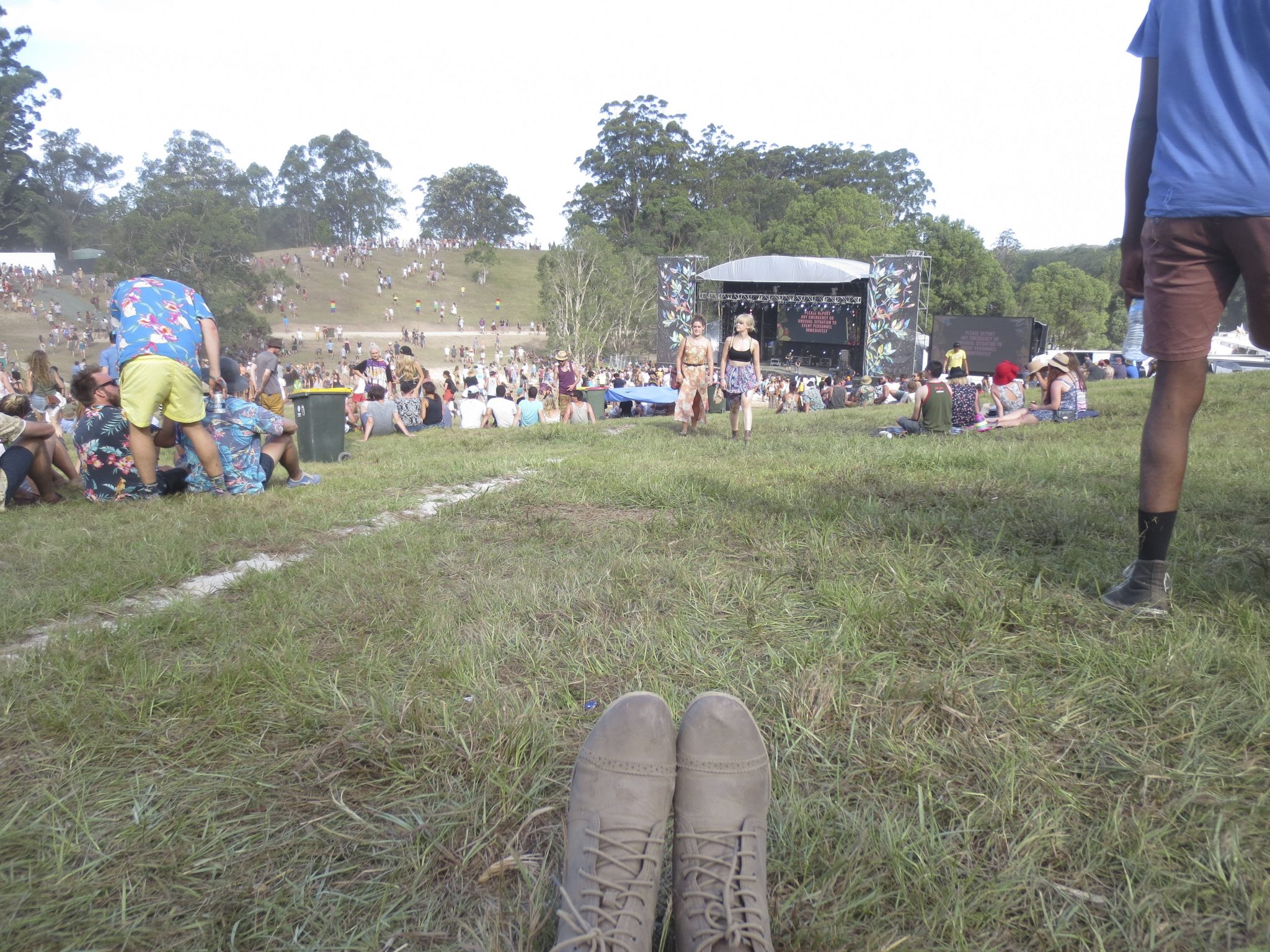 I figured I would be going to this festival on my own again, like Strawberry Fields, but I received an email just before the festival saying they were looking for a few more volunteers due to dropouts. I convinced my best friend in Sydney to come with me, and I suddenly had the possibility of volunteering for a week with my closest friend abroad and ringing in the New Year with her. Without a doubt, I was beyond happy. 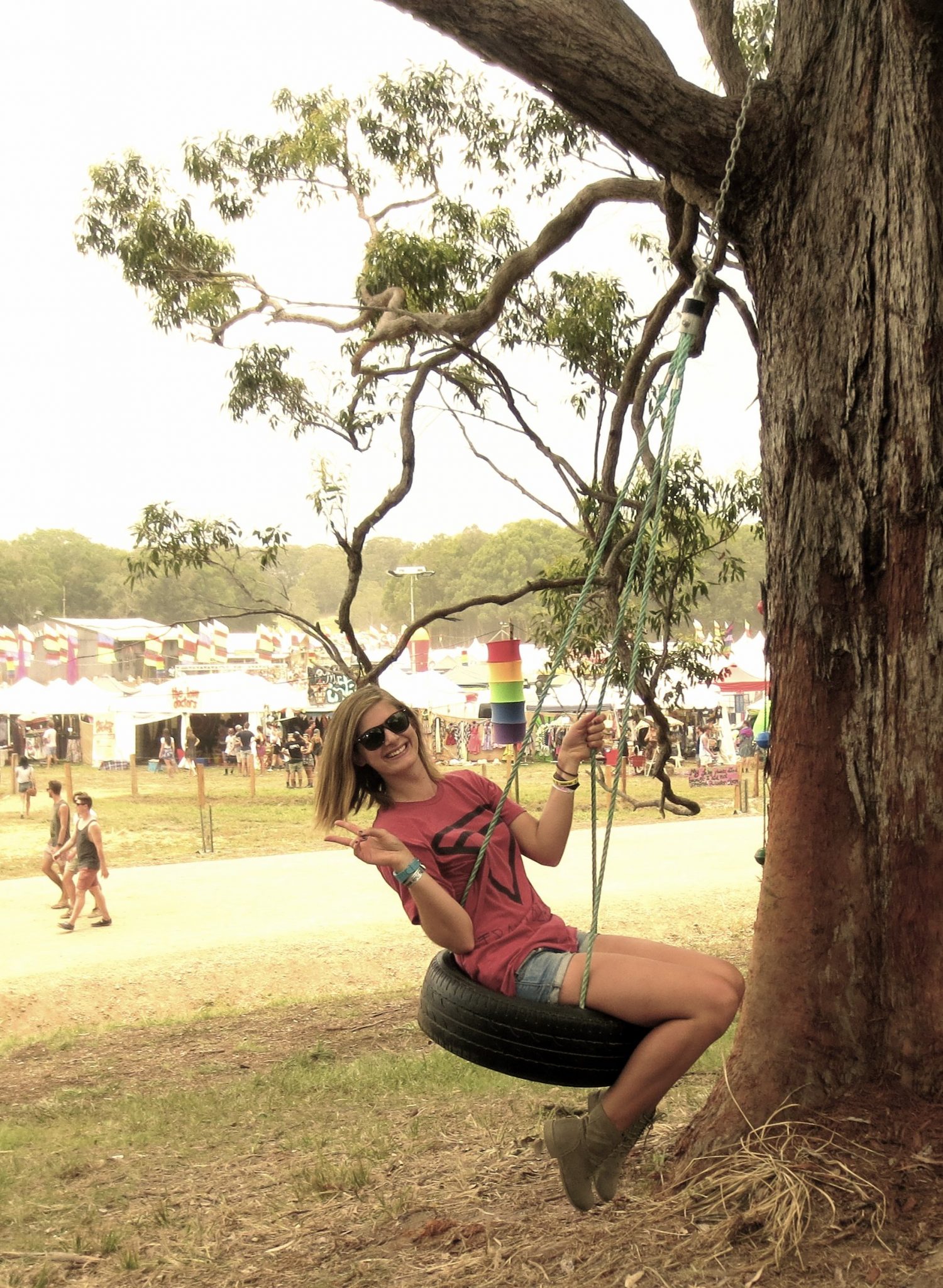 We took the train to Byron Bay, and hitched a ride to the festival grounds from a lovely old man who was volunteering at Falls Fest as well.

We had to get there a few days before the start of the festival, because it’s such a big festival, and thankfully incredibly well organized. The volunteers, or “vollies” as they called us, had their own camping. It was easy to make friends with our tent neighbors since we were all volunteers, and I met some awesome Aussies from Brisbane, who I’m still friends with today 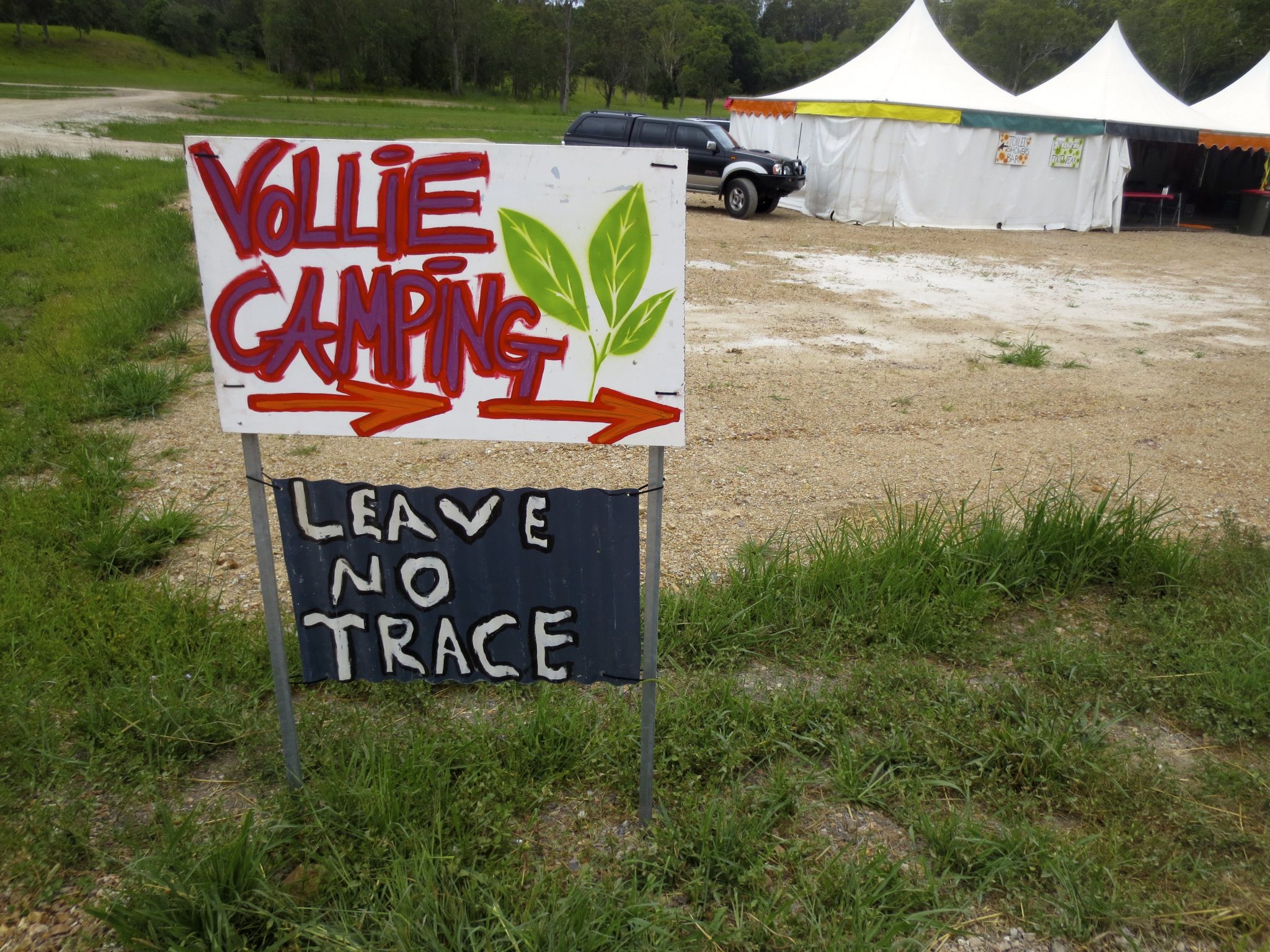 We relaxed the first couple of days, explored the little town nearby via taxi, and melted in the high humidity. We even experienced an epic summer thunderstorm under a tent, reading our books under flashlights, and listening to craft beer podcasts to keep ourselves entertained.

I was on the green team, picking up trash and recycling, which wasn’t as bad as it sounds, because we were pretty much left to our own devices, meaning we could go watch our favorite acts while we worked. Claire, my friend who came with me, was on wristbands. Everyone worked three different shifts, all lasting different times. I worked parts of every day of the festival except for the last day.

It was a beautiful festival. From the art installations, to the stages, to the grounds, and festivals goers, it was hands down my favorite festival in Australia, and some of my best memories from Australia came from it. There was this acoustic duo, I don’t think they even had a name for themselves yet, but they were simple, pure talent. They were on one of the smaller stages and I’d listen to them each morning, because they were one of the first acts on for the day. 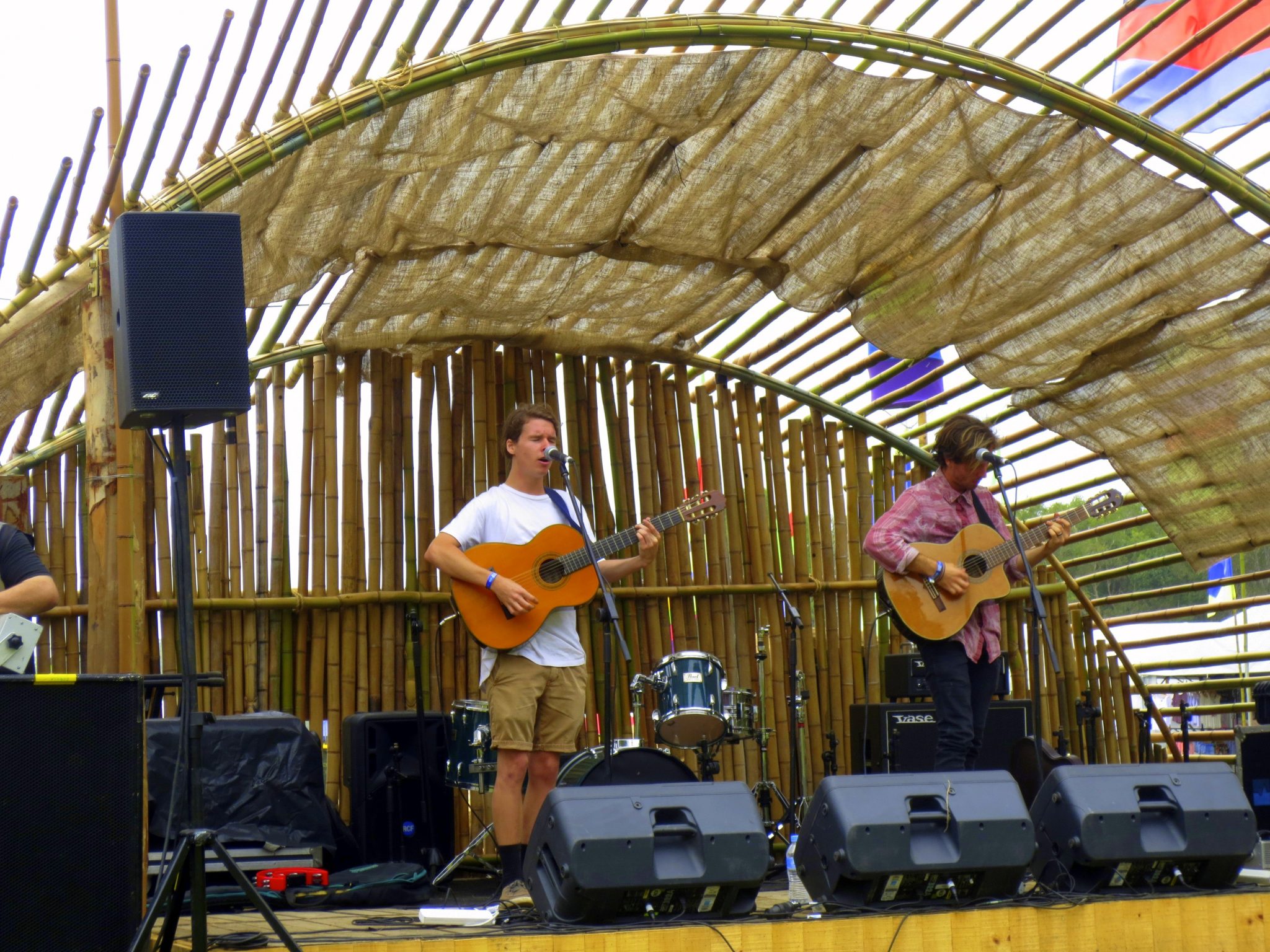 That’s how I spent most of the first day, just taking it all in, going from stage to stage listening to acts I’d never heard of. Checking out the copious amounts of food and merchandise being sold, really contemplating getting a feather in my hair, you know, all the important things to think about at a festival. 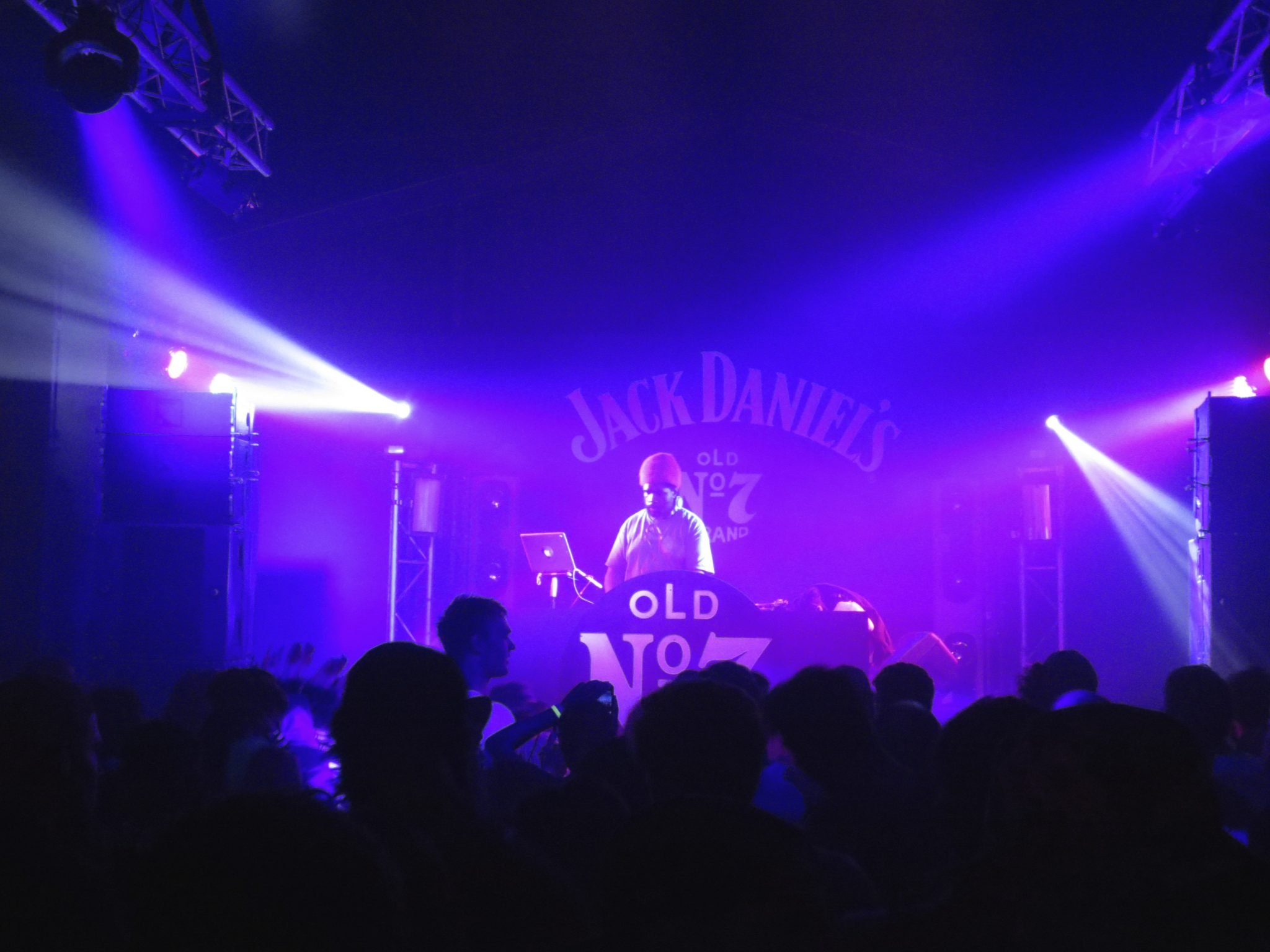 The second day was New Year’s Eve, and I was supposed to be working until midnight. Claire and I made plans to meet by a certain tree and head down to watch The Roots at the main stage to ring in the new year. At 11:45pm I stashed my trash picker and bucket, took off my hi-vis jacket, and met Claire at the top of the hill just as The Roots started playing. It was ridiculous, looking out over the natural amphitheater, thousands of people getting ready to ring in the New Year and dancing to The Roots in sync.

Claire and I ran down the big hill and joined in towards the front of the stage, “5…4…3…2….1…HAPPY NEW YEAR!!!”, we both screamed as the Roots started playing The Seed 2.0, my favorite song of theirs. It was surreal how happy I was in that moment, it’s my favorite New Year’s Eve to date.

The next day was even better: hanging around the forest stage during my shift to watch The Paper Kites, chilling out laying on the grass watching Bonobo’s set, as night fell, watching Grizzly Bear, and finally my favorite act of the whole festival, and quite possibly one of my favorite live performances I’ve experienced, Vampire Weekend. Day 3 was an overload of good music, and I couldn’t imagine it getting any better, but there was still one more day, the last day of the festival and my day off. 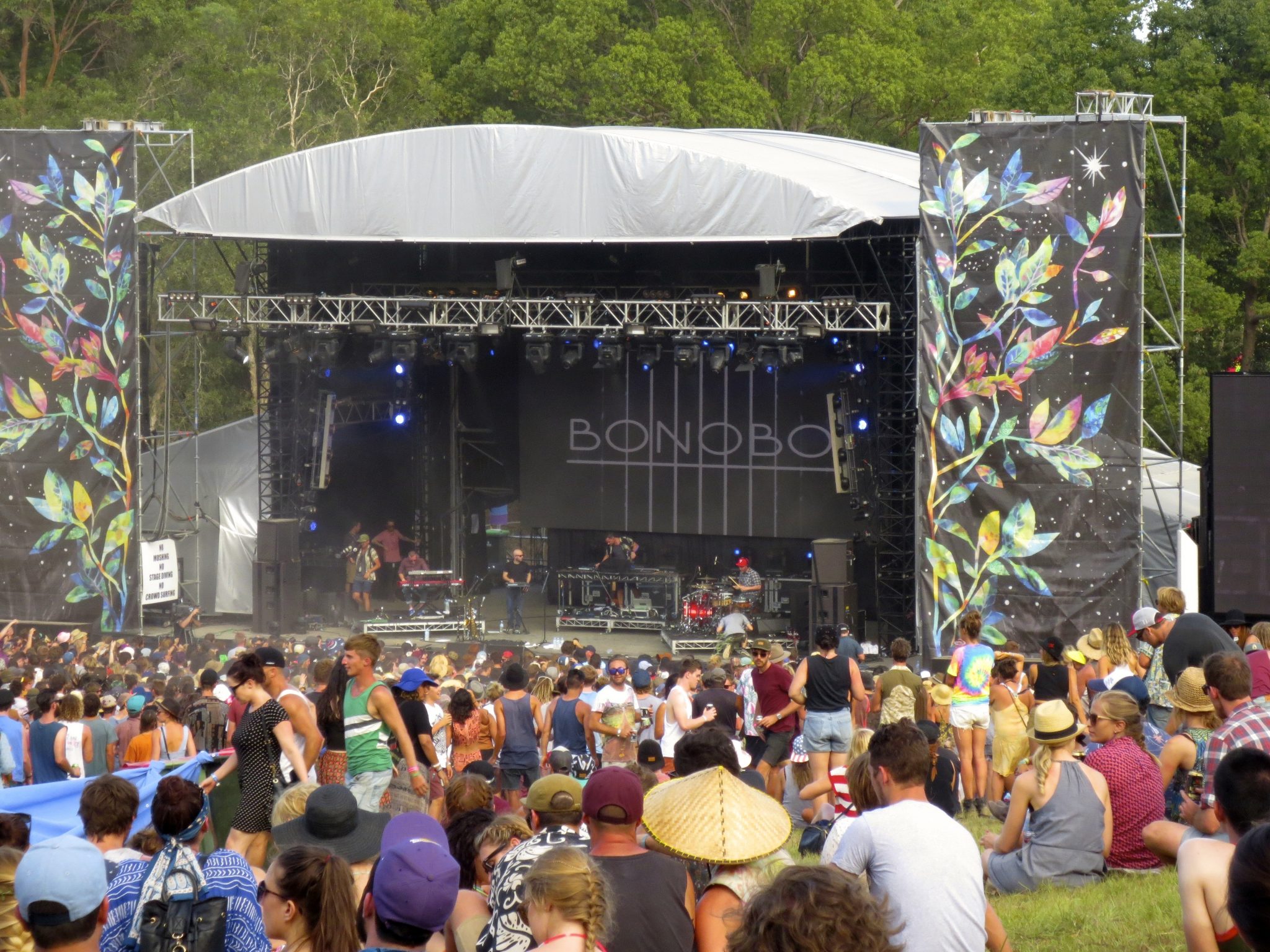 I should say, we had been trying to find my friend, Matty, from Sydney who was at the festival. He offered to give me a ride home after the festival, but as of yet, we’d been unable to find his tent area. We looked two different days and was about to give up, until we realized there was one last camping area on the furthest side from ours which we hadn’t checked out yet. Do you know how hard it is to find friends at a festival when you don’t come in with them and cellphone service is lacking? It’s very, very hard.

We took off that afternoon and finally found his campsite. He was camping with a huge group of friends, and Claire and I immediately joined in and poured ourselves a drink and got to know some of the people in the group. 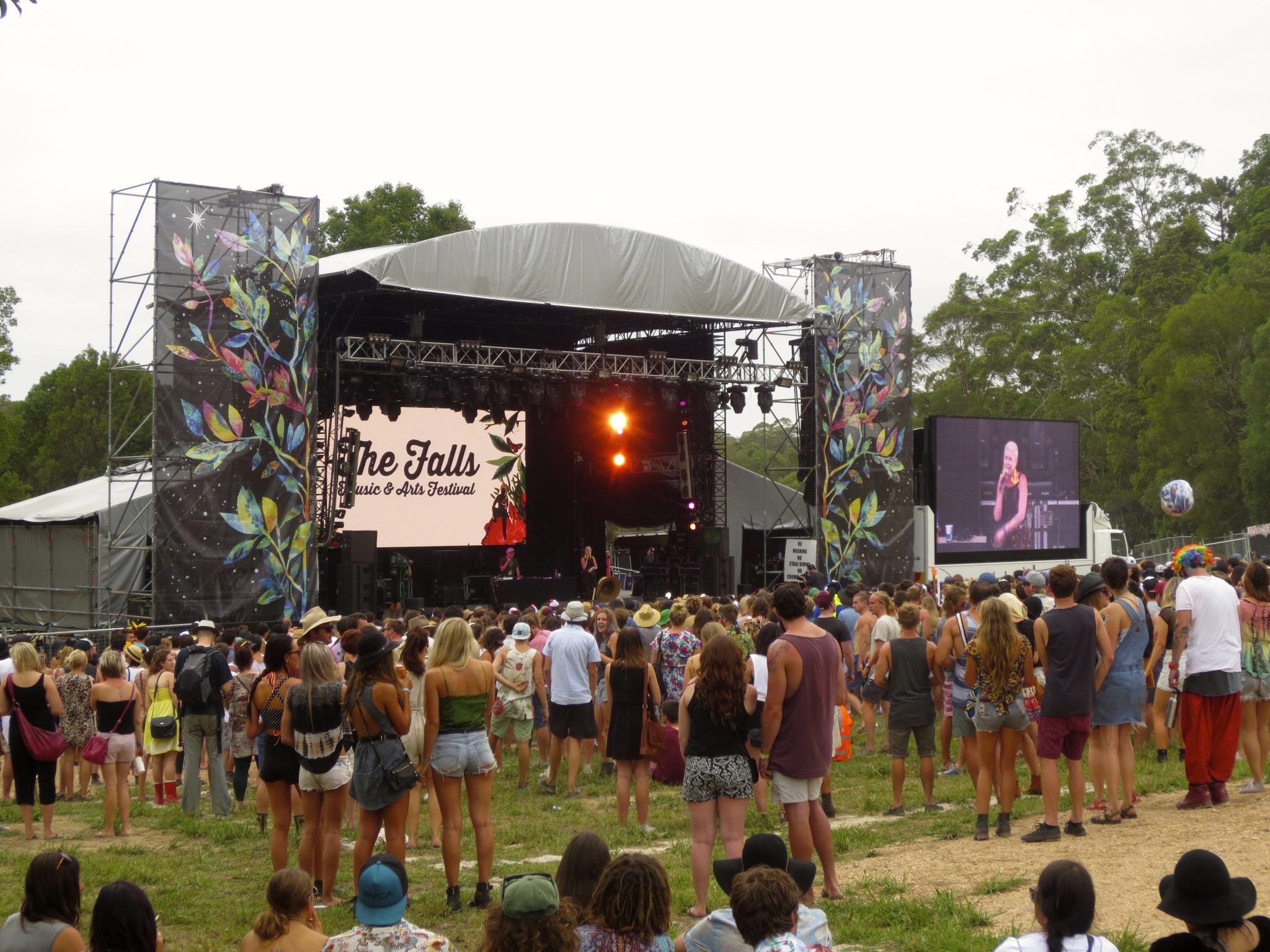 That’s when I noticed, let’s call him, Max. He sat near me and started chatting to me about California and life in Australia. As we all walked back to the festival when we were ready for some more music, he stuck by Claire and I, still interested in learning more about us. We walked to the forest stage where there was a DJ playing, and we all started dancing. 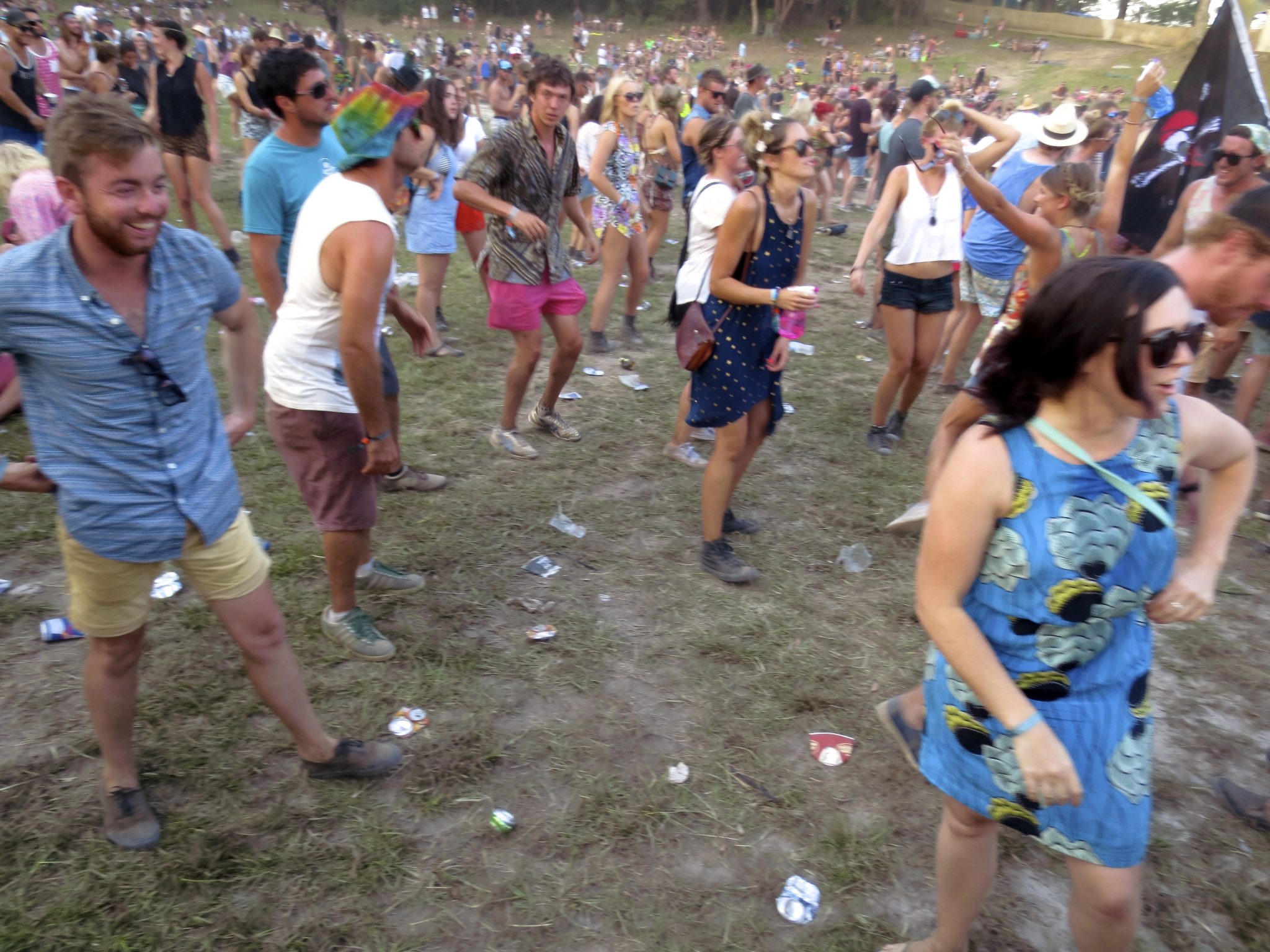 We checked out Solange for a bit at another stage, and headed back to the forest stage for London Grammar’s set. We all sat on the hill, and Max put his arm around me and took my hand. The sun started setting behind the stage and their hit, Strong, came on. He laid down and brought me to him, he kissed me under the fading sun with London Grammar playing in the background. It was one of those moments where everything just stopped and time stood still for a little while, completely lost in the moment.

We went back over the hill, and danced to the high energy band, The Wombats, and watched a less than stellar performance by MGMT. After the music ended, I walked back to Max’s campsite and stayed until I was too sleepy and decided to head back to my tent. He walked me all the way back to the other side of the festival grounds, and kissed me goodnight in front of my tent, fading off into the darkness. 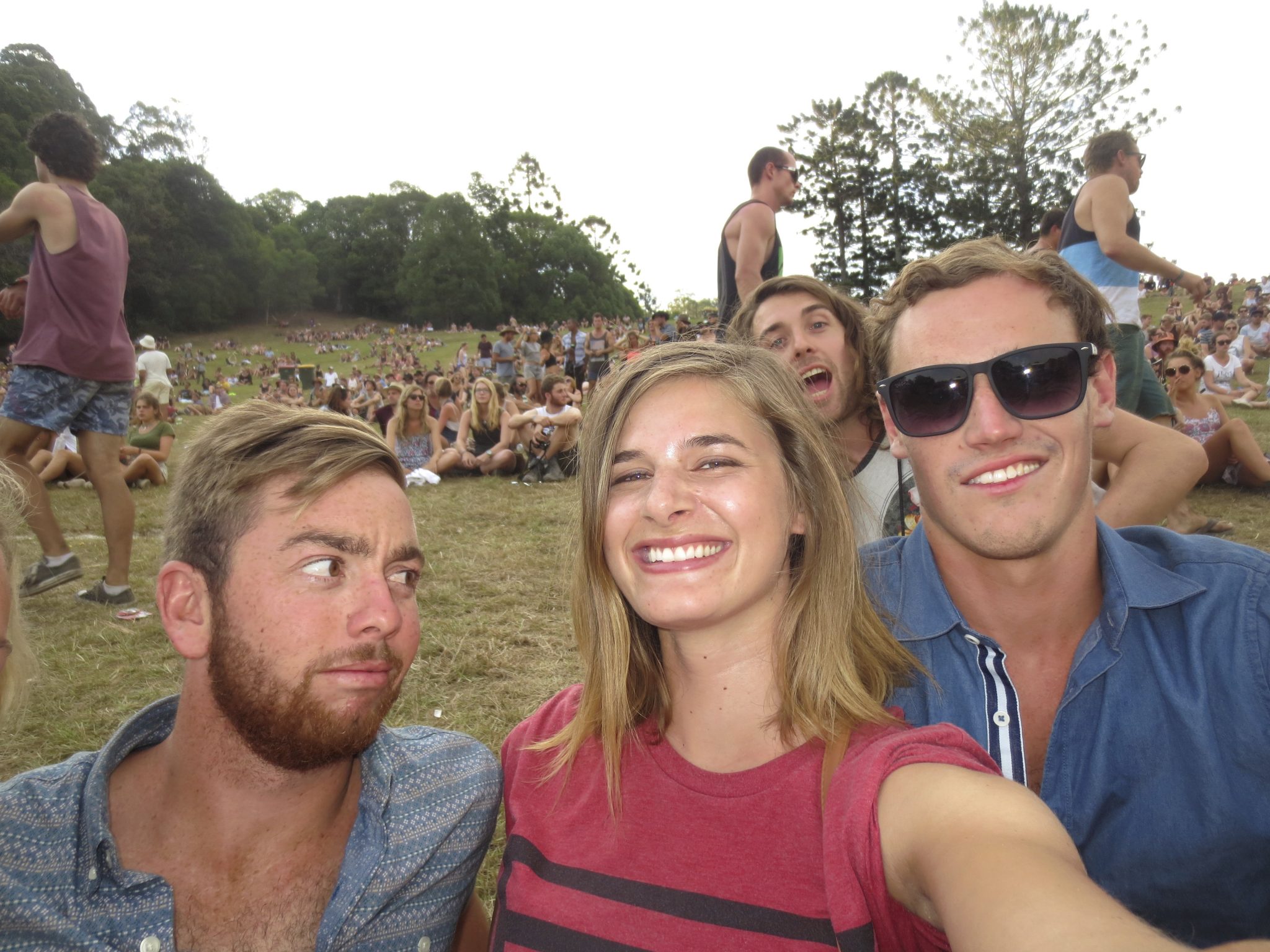 The next morning I said goodbye to Claire, who was taking a flight back to Sydney to get back to work on time. I was still counting on Matty to give me a ride back to Sydney, so I made my way back over to his campsite early in the day. It was another searing hot day, and I was feeling lightheaded by the time I made it there with all of my camping gear on my back.

Max came out of his tent and gave me a hug good morning. We hung out talking in his tent for awhile, until I decided to go look for Matty. It turns out he had left over an hour ago, without saying goodbye to anyone, and leaving me without a ride. Everyone else in the group either lived in Brisbane or the northern part of New South Wales, but not Sydney.

The only exception was a guy who lived in Manly, by the name of Phil. Phil was my only hope for a ride home if I didn’t want to hitchhike again, and he thankfully agreed to take me. I said goodbye to Max, and gave him my name if he wanted to find me again, but not my number because I had lost my phone the week before. Phil and I had a long ride home, getting to know each other, swapping music tastes, listening to a lot of Phantogram, and enduring the exhausting drive after an epic week.

I made it back to mine in the early morning, I unlocked my door and fell onto my bed. I had work later that day, but for now I was graciously finding sleep in the grooves of my mattress. As my consciousness slowly started to fade, I tried to wrap my mind around how great of a week I just had, and how I wouldn’t forget the memories I made in the process anytime soon. I had an overwhelming feeling that 2014 was going to be a good year, it was already off to a great start.